Submitted Successfully!
Thank you for your contribution! You can also upload a video entry related to this topic through the link below:
https://encyclopedia.pub/user/video_add?id=16644
Check Note
2000/2000
Soybean Callus as a Tocopherols Source
Edit
Upload a video
This entry is adapted from 10.3390/plants10122571

Soybean (Glycine max (L.) Merr.) is a key species used by the nutraceutical and functional food industries for its secondary metabolites such as polyphenolic compounds, tocopherols, tannins, lignins, and alkaloids. Particularly, soybean is an excellent source of tocopherols with about 300 μg g−1/seed total tocopherols. In fact, tocopherols exist in four forms (i.e., α, β, γ, and δ). Among them, γ-tocopherol is found in higher concentrations (more than 60%), and α-tocopherol accounts for less than 10% of total tocopherols in soybean seeds. Therefore, as the α-tocopherol is an essential nutrient that functions as a peroxyl radical scavenger in the body, the dietary reference intake for vitamin E is currently based solely on α-tocopherol. Despite the lesser presence, α-tocopherol is reported to have the most significant antioxidant activity among tocopherols and is preferred by the human body, as it is the predominant form of vitamin E found in the blood and tissues. α-tocopherol is a fat-soluble antioxidant and serves as a peroxyl radical scavenger protecting the polyunsaturated fatty acids in membranes and lipoproteins (protects the fats in low-density lipoproteins from oxidation). Furthermore, vitamin E is of vital importance for the nervous system, as a deficiency in humans leads to ataxia and myopathy. α-tocopherol is found naturally in plant sources as RRR-a-tocopherol and synthetically manufactured as all-rac-a-tocopherol.

The synthetic all-rac-a-tocopherol consists of a mixture of all eight possible stereoisomers, making the natural vitamin E not equivalent with its synthetical form as their molecular structure is not identical. Furthermore, the bioavailability of natural RRR- is higher than synthetic all-rac-a-tocopheryl with a 2:1 ratio (of RRR: all-rac) [1]. Additionally, in 2016, the US FDA changed the RRR to all-racemic α-tocopherol ratio of biopotency from 1.36:1 to 2:1 for food-labeling purposes [2].
Even though both sources of α-tocopherol, the naturally sourced RRR- and synthetic all-racemic- are commonly consumed from foods and dietary supplements, natural RRR α-tocopherol is more likely to have the most significant effect on health outcomes. Because of vitamins’ potential health benefits, there is considerable interest in plants with high vitamin E content. There are considerable research efforts to find a suitable/sustainable way to produce tocopherol, especially α-tocopherol. Therefore, soybean callus could possibly be used as a source of α-tocopherol with health benefits for functional foods and nutraceuticals.
Recently, new biotechnological approaches have been introduced to produce a variety of phytochemicals, bioactives, and nutrients from plants and microalgae in vitro cultures [3]. Significantly, the biotechnological production of controlled culture conditions has been greatly explored to obtain phytochemicals and nutrients from calli [4]. Most plant species required both the cytokinins and auxins for maximum callus induction [5]. Furthermore, to produce superior ingredients from callus culture, the callus induction and proliferation depend on the effects of plant growth regulators (PGRs) and their concentrations as well as the specific plant species [6]. For example, in Sonchus arvensis L. the combination of 1 mg/L 2.4-dichlorophenoxy acetic acid (2.4-D) and 0.5 mg/L 6-Benzylaminopurine (BAP) was the best treatment, having the shortest induction time and the highest callus number [7]. In Glossonema varians, a combination of 2.4-D and α-naphthalene acetic acid (NAA) was found to be most desirable for optimum growth of callus [8]. In Polyalthia bullata the picloram was more advantageous for callus induction, while dicamba was the best for callus multiplication [9]. In Azadirachta indica the highest callus weight and accumulation of azadirachtin was recorded in green callus induced using thiadiazuron (TDZ) [10].
With regard to soybean, several reports showed that soy callus could be used to produce phytochemicals and nutrients [11][12][13][14][15][16][17]. For example, soybean callus or soybean callus suspension cultures were reported to have isoflavones [18][19][20]. Furthermore, soybean callus was reported to be utilized in increasing the production of tocopherols in soybeans by accelerating the flow of biosynthesis with an increased total tocopherol content [21].
Based on these reports, there is a possibility of using soybean callus as a sustainable source to produce tocopherol. However, despite the potential of soybean callus as a possible source of tocopherols, there is missing information about the possible effects of commonly used herbicide uses on soybean callus production. There is enough evidence that treatment with pesticides and herbicides may change the nutritional quality of food crops, especially the vitamin content [22].

Different types of explants can be used to initiate in vitro soybean callus cultures such as immature embryos at different developmental stages, with lengths from 0.5 to 10 mm. [23]; shoot tips and cotyledonary nodal segments [24]; various explants derived from 10-day-old seedlings of soybeans such as whole cotyledon, cotyledonary node, hypocotyl, and root [25]; mature cotyledons and embryos [16]. To increase callus production, Kosturkova and colleagues initiated the in vitro culture of cotyledons and cotyledonary nodes in five different soybean varieties [26]. Since our callus was produced to analyze the tocopherol content and compared it with the one in soybean, we used half of cotyledon and hypocotyl for initiation.
Culture medium MS and cytokinin BA has been frequently used in in vitro soybean cultures [27]. Furthermore, the MS medium, with the combination of cytokinins BAP (0.1 mg/L) and TDZ (0.1 mg/L), has been proved to be an efficient medium for initiating in vitro culture of soybean callus. Using this medium, sterilized soybean treated for 20 min with a concentration of 20% ACE (5% active chlorine) were initiated between 66.67–80%, similar to the results reported by Phat and colleagues [25].
Among the PGRs used in callus production, especially for somatic embryogenesis and plant regeneration in soy, 2.4D has been used in various concentrations, between 3–206 μM [16][17]. In our study, for the production of callus, along with the medium used to initiate the callus culture (MS + 0.1 mg/L BAP + 0.1 mg/L TDZ), we also used the MS + 1.5 mg/L 2.4D. Since our callus was produced as a possible source of tocopherols, the aim was to develop a callus growth protocol that would contain as few PGRs as possible. In contrast to our method, Kumari et al. 2006 [28] used the MS culture medium supplemented with much higher concentrations of PGRs such as BA—2.22 μM with 2.4-D—4.53, 26.6, 45.2, 90.4, 135.6, 180.8, and 226.0 μM for embryogenic callus induction, and the highest frequency (92.9%) was obtained on the supplemented medium with 180.8 µM 2.4-D and 2.22 µM BA (1 mg 2.4 D = 4.55 μM and 1 mg BA = 4.44 μM).
Using the culture medium MS supplemented with 0.1 mg/L BAP + 0.1 mg/L TDZ, a significantly higher amount of fresh callus was obtained than using the medium supplemented with 1.5 mg/L 2.4 D in soybeans cultivated in the conventional system of tillage with second weed control. Additionally, in soybeans obtained with second weed control, on the same culture medium, Gi showed significant differences compared to Gi obtained on the second culture medium.
Based on these data, in this study, four Bulgarian soybean varieties were used in the production of pharmaceuticals and other valuable substances using the basal MS medium with three combinations of PGRs: 1 mg/L kinetin and 0.5 mg/L 2.4-D, 0.5 mg/L kinetin and 1 mg/L 2.4D, 0.1 mg/L kinetin and 0.5 mg/L 2.4D obtaining a callus growth rate between 1.2 and 9.1, depending on the variety, explant, and culture medium [26].
This is probably first study to regenerate soybean callus from crops with different weed control variants. The data show that the use of herbicides in soybean culture may have an impact on the quantity and quality of soy callus produced in vitro.
For years, soybean seeds have been used as an important source of dietary tocopherols. However, soybean callus has not been explored much as a possible source of tocopherols. Callus culture and suspension-cultured cells are an essential source of tocopherols for several species: Chenopodium quinoa [29], Argania Spinosa [30], Helianthus annuus [31][32], Carthamus tinctorius [33], or Daucus carota [34].
The data showed that, in both callus and soybeans, from all three weed control variants, γ-tocopherol was present in a higher amount than α- and δ-tocopherols (Figure 1). For example, γ-tocopherol was 81% in callus compared with 88% in soybean, α-tocopherol was 10% in callus compared with 2% in soybean, and δ-tocopherols was 9% in callus compared with 10% in soybean (second weed control system). Similarly, other results show that γ-tocopherol is reported to comprise about 50–60% of total tocols, while α-tocopherol comprises only 5–10% in soybeans [35][36]. 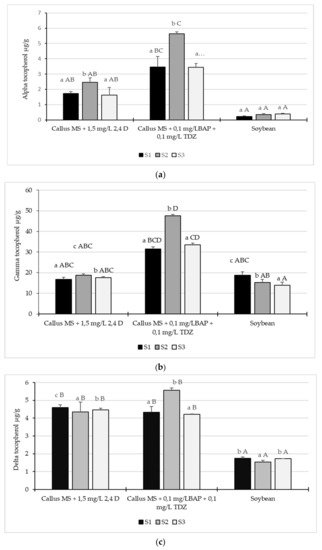