Submitted Successfully!
Thank you for your contribution! You can also upload a video entry related to this topic through the link below:
https://encyclopedia.pub/user/video_add?id=16640
Check Note
2000/2000
The Molecular Hydrogen Hypothesis
Edit
Upload a video
This entry is adapted from 10.3390/hydrogen2040025

Since the late 18th century, molecular hydrogen (H2) has been shown to be well tolerated, firstly in animals, and then in humans. However, although research into the beneficial effects of molecular hydrogen in both plant and mammalian physiology is gaining momentum, the idea of utilising this electrochemically neutral and non-polar diatomic compound for the benefit of health has yet to be widely accepted by regulatory bodies worldwide. Due to the precise mechanisms of H2 activity being as yet undefined, the lack of primary target identification, coupled with difficulties regarding administration methods (e.g., dosage and dosage frequencies, long-term effects of treatment, and the patient’s innate antioxidant profile), there is a requirement for H2 research to evidence how it can reasonably and most effectively be incorporated into medical practice.

It is well reported that H2 has significant effects on the redox status of the cell, with many investigations citing meaningful reductions in destructive oxidant and nitrosative species, including the hydroxyl radical (·OH) and peroxynitrite (ONOO−) [1][2][3]. Despite H2 administration being demonstrated to reduce the cellular damage caused by oxidative stress in vivo [4], further analyses of the biological kinetics of intracellular reactions between ·OH/ONOO− and H2 indicate that this may not be the case [5][6]. Instead, it has been mooted that an upstream mechanism (such as reduction of metalloproteins e.g., Fe3+/Fe2+) of radical production is more likely to be a primary target for H2 interaction [7]. Although, further empirical enquiry is required if such a hypothesis is to be validated and the precise mechanisms of H2 activity are to be fully elucidated.
In addition to the direct or upstream (or both) reduction of pernicious ions and radicals, H2 exhibits further antioxidant potential as a regulator of nuclear factor erythroid 2-related factor 2 (Nrf-2). Nrf-2 is a transcription factor known to initiate genetic transcription of >200 cytoprotective genes containing the promotor sequence 5′-TGACNNNGC-3′, known as the antioxidant response element (ARE) [8]. Genes initiated by ARE activation include a suite of antioxidant enzymes, including catalase (CAT), glutathione (GSH), superoxide dismutase (SOD), and thioredoxin (Thx) [9].
Major contributary sources of cellular ROS are Complexes I and III of the mitochondrial electron transport chain (ETC). Superoxide (O2−), produced here by single-electron reduction of O2, is the antecessor molecule for both deleterious ions and radicals, but also for gaseous signaling molecules, such as hydrogen peroxide (H2O2) [10]. A recent study, conducted by Ishihara et al., noted that aberrant electron flow through the ETC was rectified by H2, and this in turn suppressed generation of O2− in Complex I [11]. Concomitant reduction in semiquinone radicals was also demonstrated to reduce levels of O2− downstream in Complex III, which resulted in stabilization of mitochondrial membrane potential [11]. A 2% inhalation of H2 in murine models was shown to enhance mitochondrial membrane potential and to increase Complex I activity and subsequent ATP production. Furthermore, enhanced expression of biological markers associated with mitochondrial biogenesis (e.g., Nrf-2, peroxisome proliferator-activated receptor gamma coactivator 1-alpha (PGC-1α), and mitochondrial transcription factor A (Tfa)) was also documented [12]. Thus, this suggests H2 exhibits pleiotropic activity at the subcellular level, as shown in Figure 1. 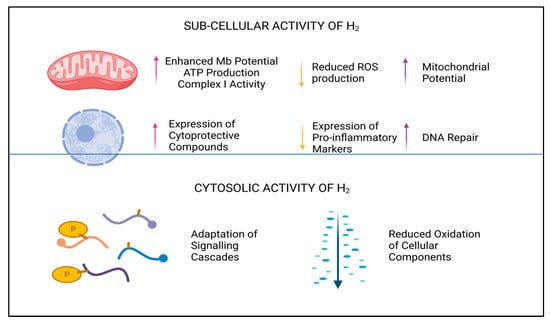 Figure 1. Subcellular and cytosolic activity of H2. Legend: Graphical overview of the cellular and subcellular influence H2 has within cells.
In addition to the roles H2 has in remediating the cellular redox environ and enhancing mitochondrial stability, H2 is also known to support the immune system via downregulating genetic expression of pro-inflammatory molecules, known to exacerbate the inflammatory response [13][14]. Coetaneous upregulation of such anti-inflammatory proteins as heme oxygenase-1 (HO-1) and Nrf-2 [14] further demonstrates that H2 has multiple intracellular effects, but the explicit mechanisms by which these effects are induced is largely unknown. Antecedent research demonstrates a reduction in nuclear factor of kappa light polypeptide gene enhancer in B-cells inhibitor, alpha (IκBα) phosphorylation [15], in the presence of H2, and subsequent inhibition of the protein complex nuclear factor kappa-light-chain-enhancer of activated B cells (NF-kB). The NF-kB family of proteins have similar homology and share a 300 amino acid N-terminal DNA binding or dimerization domain and are responsible for initiating DNA transcription of inflammatory cytokines, chemokines, and adhesion proteins [9]. By identifying an upstream event of NF-kB activation, which is inhibited by H2, it is logical to assume that H2 does not directly interact with such proteins. Although, the question as to whether such anti-inflammatory mechanisms are a direct result of H2 interactions with cellular signaling events, such as protein phosphorylation, or through direct modulation of oxidative stress, remains.

Oxidative stress, metabolic dysregulation, and inflammation are known to underpin numerous disease pathologies, including acute and chronic respiratory disorders (e.g., COVID-19, COPD, respectively) [16], cancer, metabolic diseases, and neurodegeneration [17][18][19][20][21][22]. It is generally accepted that H2 selectively reduces oxidative and nitrosative stress in biological systems and reduces both the apoptotic and inflammatory responses in cells, although which system has the cardinal influence here is currently unknown. Due to the physical non-polarity, electrochemical neutrality, and low molecular weight of this diatomic molecule, it is unlikely to be perceived as a typical signaling molecule [23], relying on receptor binding mechanisms or electrochemical attraction for modulating cellular responses. However, what is clear is that H2 has remarkable potential as an antioxidant and cellular protective compound, not only reducing accumulative damage caused by reactive signaling molecules [14][24], but also by upregulating endogenous production of redox-balancing proteins, including catalase (CAT), glutathione peroxidase (GPx), and superoxide dismutase (SOD) [25]. In addition to—or perhaps as a result of—the antioxidant influence of H2, a marked reduction in the expression of intrinsic pro-apoptotic and pro-inflammatory proteins, peptides, and transcription factors is also described [24][25]. Downregulation of pro-apoptotic biomarkers are noted to include Bax and caspase proteins [26], whilst inhibition of pro-inflammatory markers interleukins (e.g., IL-6), NF-kB, and tumor necrosis factor alpha (TNFα), and others, have also been observed [25][26]. By moderating the hyper-inflammatory response during infection or disease, H2 can reduce both cellular and tissue damage and subsequent harm associated with aberrant inflammation.
Considering the intricate crosstalk between these intrinsic defense systems, and their role in disease pathology, the modulative effect demonstrated by H2 in these fundamental pathways [3][24][25][26] may help to both prevent and ameliorate the symptoms of numerous healthcare conditions. Furthermore, to date, there are no reports, clinical or empirical, that suggest H2 acts as a strong cellular reductive agent, a mechanism typically initiated by prolonged antioxidant signaling or mitochondrial inactivity. Instead, H2 is likely to act as an hormetic substance, ensuring the redox balance is kept intact [27][28].
The effectiveness of H2 as a novel therapeutic, however, may largely depend on the duration and route of administration, along with the dosage received by the patient. In this regard, both hydrogen inhalation (HRW) and intravenous injection (HRS) can provide monitorable and quantifiable means of treatment, which is favorable when considering future clinical applications of H2 [13]. Alternatively, gels, patches, nanotechnologies, and topical applications may only afford semi-quantifiable results due to the rates of H2 absorption and consequent distribution dynamics, for example. As such, the semi-quantifiable application methods may only be viable as non-clinical interventions until further research is conducted.
Overall, H2, to the best of our knowledge, has an excellent safety profile and is well tolerated in humans, with no severe adverse effects associated with hydrogen therapy having been reported [29], however it is delivered.