Submitted Successfully!
Thank you for your contribution! You can also upload a video entry related to this topic through the link below:
https://encyclopedia.pub/user/video_add?id=16603
Check Note
2000/2000
Closed-Canopy Tropical Forests of Hainan
Edit
Upload a video
This entry is adapted from 10.3390/f12111596

Biological invasions can have serious environmental and economic impacts (Dennis 2004), for example through reduced forest productivity [1] and disrupted ecosystem services [2]. Nevertheless, biological invasions may also have positive impacts, including economic benefits from the introduction of new food sources for humans [3], improved soil microbial biomass and soil mineralization [4], and positive bottom-up effects on higher trophic levels [5].
In plant communities, invasive species can have detrimental effects on the native flora, either directly via competition, or indirectly by altering soil chemistry [6], nutrient cycling [7], or community assembly [8]. The mechanisms of plant invasion largely involve two major hypotheses: one based on the invasive ability of the exotic species [9][10][11][12], and another based on the invasibility of the habitat [13][14]. Based on succession theory, most invasive species of forests are pioneers that can only survive in specific early successional stages (likewise for native pioneer species). Pioneer species are heliophilous plants that are generally characterized by rapid growth, shade-intolerance, fast reproductive cycles, and short lifespans (REFS).
Globally, there are approximately 289 invasive pioneer species documented to occur in the tropics and subtropics [15][16][17][18]. In general, tropical forests tend to be far less affected by invasive plant species than other forest types [19][20]. Complex forest communities and high connectivity, such as tropical forests, can resist invasion by exotic species through niche occupation and local adaptation [21][22][23][24].

2. Forest Edge Effects on Distribution and Abundance of Terrestrial Invasive Herbs and Shrubs 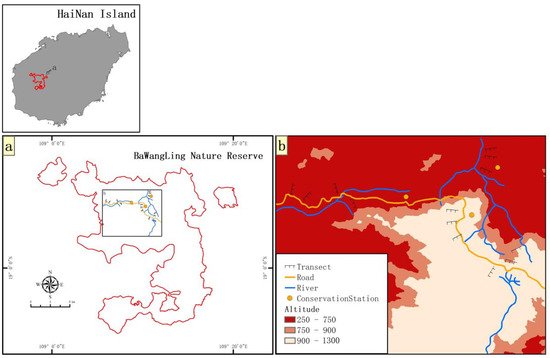 3. Species Diversity and Distribution of Terrestrial Invasive Herbs and Shrubs in Hainan Island

Across all 97 sample sites, the nine study species were detected in all habitat types except for the tropical rain forest interior (Table 1). Several TIHS were found in all non-rain forest habitats (e.g., Co, Cs and Lc) and others were found in fewer habitats (e.g., Ap, Pf, and Ph).
Table 1. Incidence of nine species of terrestrial invasive herbs or shrubs in different vegetation types in Hainan Island, China.
Of all invaded vegetation types, shrub land and forest edges had the lowest frequency of TIHS occurrence, while (abandoned) fields had the highest frequency (Table 2).
Table 2. Comparison of terrestrial invasive herbs and shrubs frequencies (TIHS/site) among invaded vegetation types (mean ± SE) *. 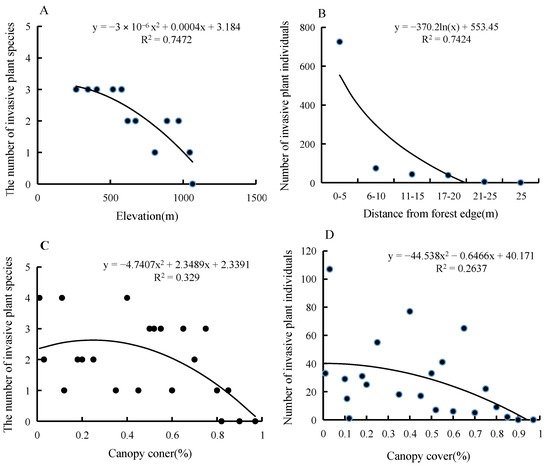 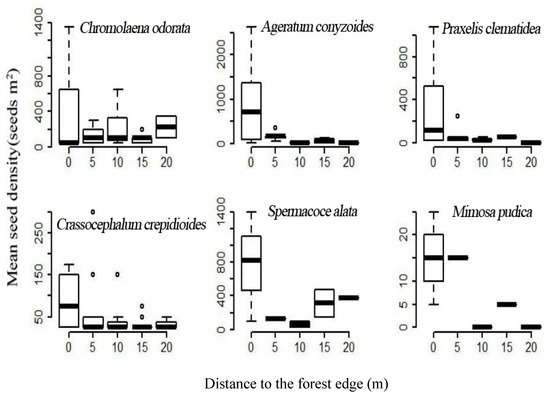 Figure 4. The relationship between distance from the forest edge (m) and the number of seeds germinated per m2 in our seed germination trails of soil samples collected at different distances from the forest edge.
Table 3. Germination results of the terrestrial invasive herbs and shrubs seeds in the soil seed banks of tropical forest edges.
The best-supported model explaining the canopy cover included a significant effect of altitude (LRT: χ2 = 27.234, df = 1, p < 0.001) and the distance from the forest edges (χ2 = 6.1831, df = 1, p = 0.129) (Table 4). The canopy cover increased significantly as the distance from edge and altitude increased. The second best-supported model had similar AIC to the first model and also included the forest type, though the significance was marginal (χ2 = 5.87, df = 3, p = 0.08). Low-stature forests generally had lower canopy cover than other forest types. Transects in higher areas in the study site usually had a more dense canopy cover (estimate of difference in higher altitude effect for the surveyed transects = 0.551; 95% confidence interval = 0.329, 0.774).
Table 4. The best-supported models explaining (A) the pooled species richness of exotic species and (B) the pooled abundance of exotic species (C) the presence of exotic plants in the soil seed bank. Parameter estimates and their standard errors are shown, as are standard deviations of model random effects.
For the pooled abundance of alien plants in the soil seed bank, the best-fitting model according to Akaike weights retained the significant effects of the distance from the edge (χ2 = 46.81, df = 1, p < 0.001), and the seed mass of the alien plants (χ2 = 8.682, df = 1, p = 0.003; Table 1), as well as a weak effect of canopy cover (χ2 = 1.802, df = 1, p = 0.179), while the second best model had similar AIC values to the first model and included the influence of altitude besides canopy cover and distance from edge (Table 4). For all the surveyed forests, the pooled abundance of alien species declined markedly with increasing distance from the edge. The seed traits of the exotic plants significantly affected their abundance in the soil seed bank. Light-seeded species were more abundant compared with the large-seeded species. 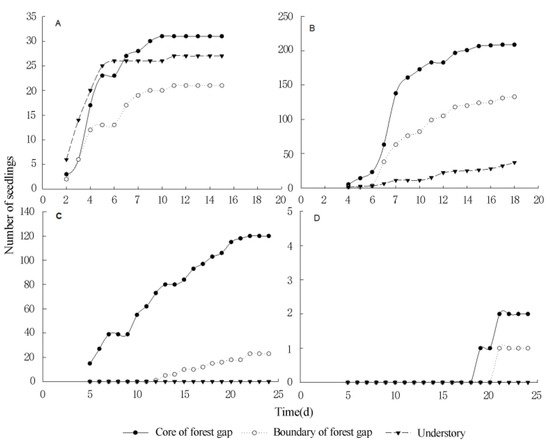 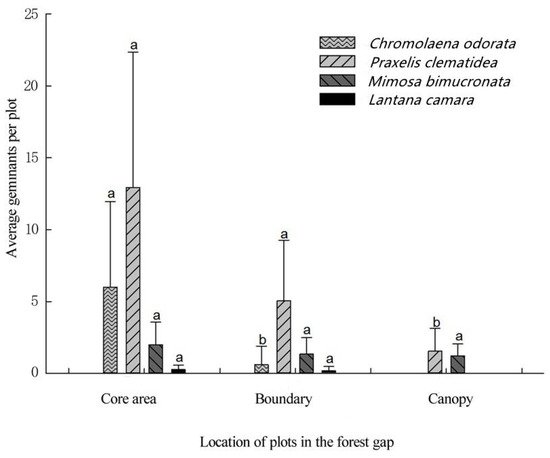 More
© Text is available under the terms and conditions of the Creative Commons Attribution (CC BY) license (http://creativecommons.org/licenses/by/4.0/)
Upload a video for this entry
Information
Subjects: Area Studies
Contributor MDPI registered users' name will be linked to their SciProfiles pages. To register with us, please refer to https://encyclopedia.pub/register :
Long Li
View Times: 90
Revisions: 2 times (View History)
Update Time: 01 Dec 2021
Table of Contents
1000/1000
Hot Most Recent