Submitted Successfully!
Thank you for your contribution! You can also upload a video entry related to this topic through the link below:
https://encyclopedia.pub/user/video_add?id=16592
Check Note
2000/2000
Bioleaching of Sorghum Straw in Bioreactors
Edit
This entry is adapted from 10.3390/fermentation7040270

Lignocellulosic biomass is the most abundant renewable feedstock to produce biofuels and biochemicals. Previous research has demonstrated the potential of bioleaching, with its superior capability of removing certain inorganic compounds compared to water leaching, to improve biomass quality for thermochemical conversion in biofuel production.

Thermochemical conversion is one of the major platforms used to convert lignocellulosic biomass into bioenergy; however, it has faced issues because of the high ash content in most feedstocks, especially herbaceous biomass, e.g., wheat straw, corn stover, sorghum straw, etc. [1]. In the combustion or gasification of biomass without pretreatment, the inorganic ingredients in biomass could cause serious issues to reactors and the environment, such as slagging, fouling, agglomeration, corrosion, acid gas emission, etc. [1]. These issues not only reduce the heat transfer efficiency of the reactors, but also cause air pollution [2]. To improve the quality of lignocellulosic biomass as a potential fuel, a pretreatment known as leaching has been extensively studied and proven effective in removing inorganic ingredients in the biomass [3]. The most common pretreatment is water leaching, which simply washes the biomass with an adequate amount of water [4]. While this is effective in removing certain inorganic ingredients that are water-soluble, more effective methods are necessary to reduce elements such as Ca, Mg, Si, and S that tend to form insoluble compounds in the plant [5]. Bioleaching might be a solution to this issue, as it has been successfully applied to the mining and coal industries to extract metals (e.g., copper) from low grade ores and desulfurization, respectively [6]. Various bacterial and fungal species have been demonstrated for their bioleaching capability to treat a range of materials, from mining ores to municipal waste fly ash [7][8].

As a versatile industrial microbe, Aspergillus niger (A. niger) has been generally recognized as safe in standard industrial settings [9]. A. niger is the main producer of the citric acid widely used in food and pharmaceutical industries [10]. Furthermore, a variety of enzymes can be produced from A. niger, such as amylase, cellulase, xylanase, pectinase, etc. [11][12][13]. Recently this microbe has received extensive attention in hydrometallurgical and environmental investigations. Wu and Ting used A. niger to recover heavy metals from municipal solid waste (MSW) incinerator fly ash in both one-step and two-step leaching, and found that bioleaching achieved a higher recovery of Mn and Zn than chemical leaching [14]. Santhyia treated the spent refinery catalyst with A. niger to recover Al, Ni and Mo, in which the use of a buffer was found to be effective in stimulating oxalic acid secretion by this fungus, while also reducing the leaching time compared to the bioleaching process without the buffer addition [15]. Mulligan studied A. niger for the recovery of Cu and other metals from low-grade ores, and achieved 68% and 46% in the solubilization of Cu and Zn, respectively [16]. 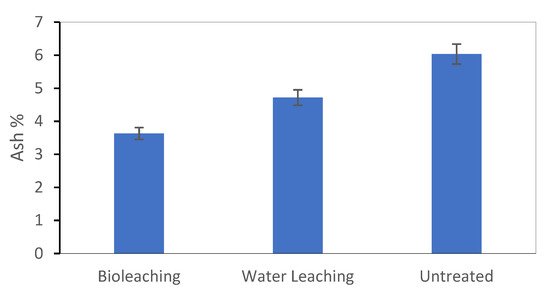 As shown in Figure 2 and Figure 3, the model assumed a ridge-shaped surface when the glucose concentration was maintained at a constant coded level 0 (5 g/L). The contour plot in Figure 3 revealed the predicted response: ash content could be further decreased by increasing X2 (leaching time) while keeping the X1 (fungal mass) at a low level. This is in agreement with the research on bioleaching heavy metals with A. niger from either fly ash or mining ores, whose leaching time durations ranged from 12 to 70 days [14][15][17]. 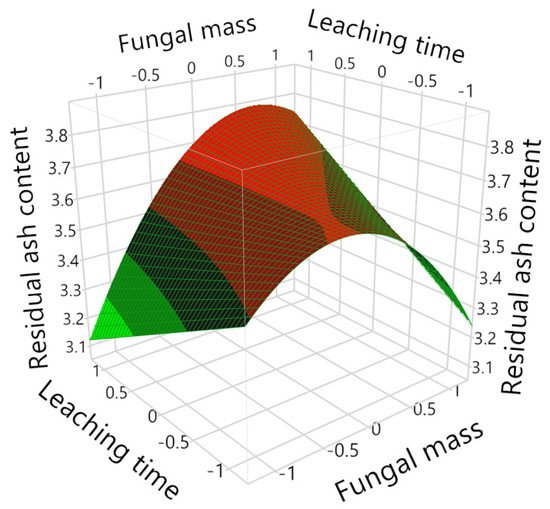 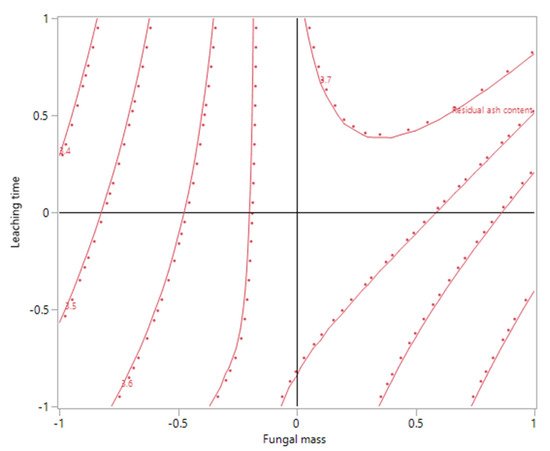 Figure 3. Contour plot of residual ash content changing with fungal mass and leaching time.
The surface and contour plots (Figure 4 and Figure 5, X2 = 0) did indicate an interesting area to explore, where X1 (fungal mass) was lower beyond the current range (<−1) while X3 (glucose concentration) was further increased (>1). In this study, the high level (+1) of X3 (glucose concentration) was set at 10 g/L with the consideration of reducing the process cost; meanwhile, other researchers were regularly using a sucrose-based medium with a sugar concentration of 100 g/L for fungal cultivation and bioleaching [17][18]. Therefore, higher carbon source concentration could be used in follow-up studies to enhance the bioleaching effect. 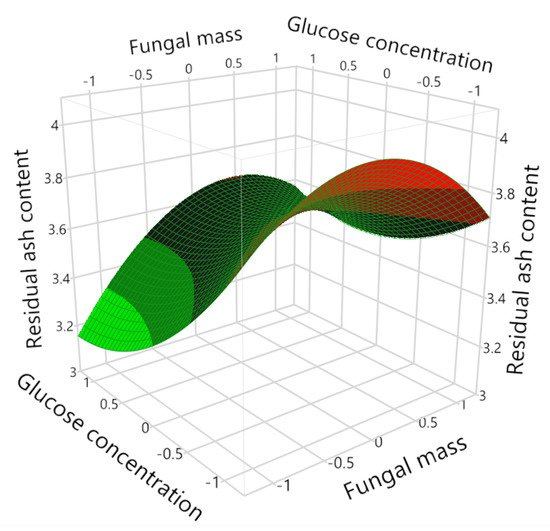 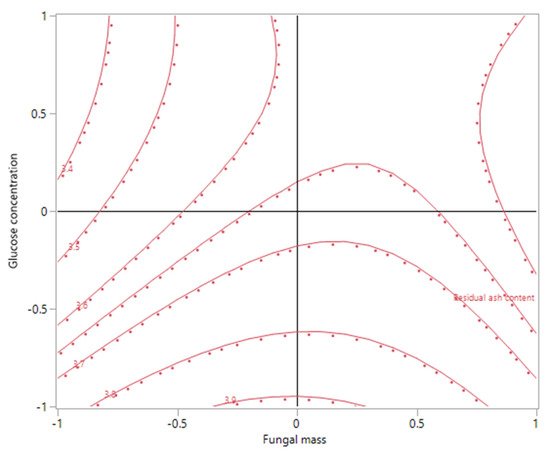 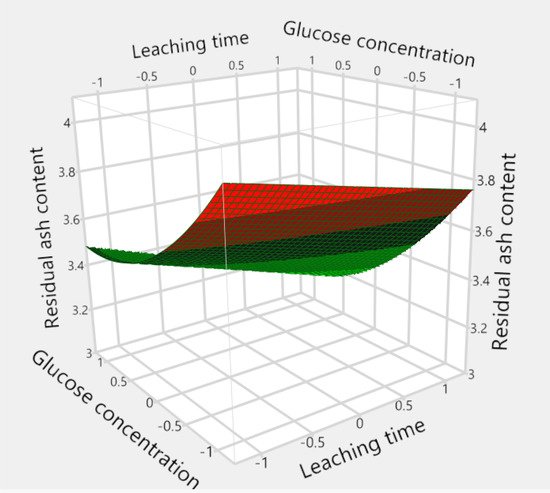 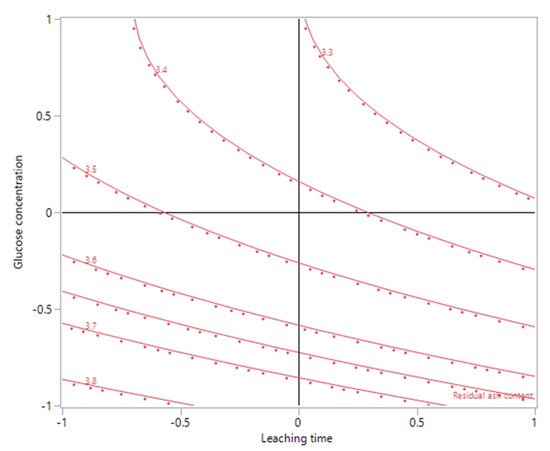 Figure 7. Contour plot of residual ash content changing with leaching time and glucose concentration.
As indicated by the RSM data, a bioleaching experiment was carried out with 0.9 g of fungal mass and 50 or 100 g/L glucose in the starting liquid. In less than 1 day (19 h), the residual ash content of the sorghum straw was reduced to 2.73% in the case of 100 g/L of glucose, as shown in Figure 8, which was even lower than all data obtained in the RSM study, and the residual ash content with 100 g/L glucose was significantly lower than that from leaching with 50 g/L of glucose (p = 0.022). This supported the prediction that increasing the glucose concentration could further reduce the ash content in the biomass. Therefore, future research could continue along the suggested path, and the minimum residual ash content might be obtained through another round of RSM design. 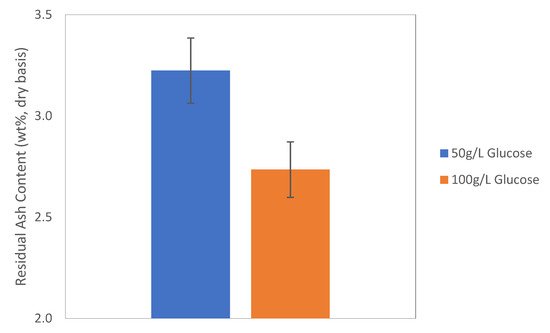 Figure 8. Residual ash content after bioleaching with 0.9 g fungal mass and 50 or 100 g/L of glucose in the starting liquid phase (n = 3).
Fungal organic acids have been presented by several researchers as main leaching agents. Yang et al. claimed that gluconic acid was the major leaching agent in their study using A. niger to remove heavy metals from MSW fly ash [17]. De Windt and Devillers used mathematical modelling to investigate the fungal degradation of cement paste and suggested biogenic acids, including acetic, butyric, lactic, and oxalic acids, contributed to the degradation [19]. Without using the fungus, Huang et al. found that citric acid, the most common product from A. niger, was an effective leaching agent at room temperature for MSW fly ash treatment [20]. A study by Umeda and Kondoh also confirmed the use of citric acid in the chemical leaching of rice husk for metal impurities removal [21]. With further adjustment on the current bioleaching process, such as more carbon source input and longer leaching time, the correlation between fungal organic acids and bioleaching efficiency could become more evident in the research. In addition, to test this hypothesis on organic acids, the next research could also investigate the effectiveness of adding acids without fungus in ash removal.
With most lignocellulosic biomass feedstocks, ash content reduction is not the sole criterium in the determination of a suitable pretreatment process. The loss of organic matters due to leaching should also be studied. The most effective pretreatment process should be removing the inorganic compounds while keeping the organic matter loss at a minimum. The previous study showed that organic matter loss in bioleaching was not significant, yet this could be further evaluated on the current bioreactor platform [22]. Besides, the ash composition after the current bioleaching process may also be analyzed in follow-up studies, as it was also viewed as a crucial factor that could influence the quality of the feedstocks [5].

More
© Text is available under the terms and conditions of the Creative Commons Attribution (CC BY) license (http://creativecommons.org/licenses/by/4.0/)
Upload a video for this entry
Information
Subjects: Energy & Fuels
Contributor MDPI registered users' name will be linked to their SciProfiles pages. To register with us, please refer to https://encyclopedia.pub/register :
Yi Zheng
View Times: 74
Revisions: 2 times (View History)
Update Time: 01 Dec 2021
Table of Contents
1000/1000
Hot Most Recent