Submitted Successfully!
Thank you for your contribution! You can also upload a video entry related to this topic through the link below:
https://encyclopedia.pub/user/video_add?id=16478
Check Note
2000/2000
Intrinsic Determinants of Upper Airway Collapsibility
Edit
Upload a video
This entry is adapted from 10.3390/children8111032

Obstructive sleep apnea (OSA) is a form of sleep-disordered breathing consisting of upper airway collapse during sleep that results in repetitive arousals and desaturations. Estimates of disease prevalence range between 1% and 3% of the general pediatric population, with significant associated clinical consequences on individual morbidity. Consequences of untreated pediatric OSA include metabolic, endocrine, cardiovascular, and neurobehavioral implications with potential for long-term consequences. However, many pathogenic features of this syndrome in children remain unclear. Understanding principal mechanisms of OSA is critical for ultimately allowing for the development of therapeutic strategies. Much of the pathogenic mechanisms of OSA currently center around upper airway collapsibility. 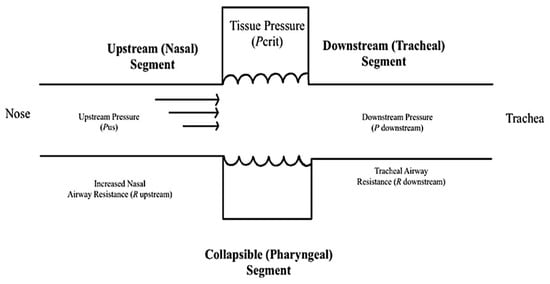 Figure 1. The Starling Resistor Model is a diagram that assists with the explanation of upper airway dynamics and the management of obstructive sleep apnea. The oropharynx is presented as a collapsible tube. Increased nasal airway resistance increases the probability that pharyngeal pressure will decrease below the CRITICAL pressure (Pcrit) and close the pharynx, which is a large proponent of obstructive events [4].
IFL during sleep is a common occurrence that results from upper airway narrowing [13]. IFL is described as the plateauing or flattening of inspiratory flow curve over time and is a non-invasive indicator of elevated upper airway resistance [14]. Flow limitation can be found when a more negative intrathoracic pressure does not result in a corresponding increase in airflow [13]. IFL is associated with a reduction in airflow, which is then followed by arousals and leads to the activation of upper airway dilator muscles for a compensatory increase in respiratory effort [13]. Persistent airflow limitation leads to sleep fragmentation [15]. Patients with IFL or upper airway resistance syndrome have been noted to present with hypotension and elevated vagal tone [16]. Nonetheless, although critical pressure and flow limitation do not provide an indication of OSA severity, these characteristics have become highly recognized as patterns for the identification and analysis of sleep-disordered breathing [1].

In contrast to smooth oscillations in airflow, OSA features sudden variances in ventilatory compliance and upper airway patency [4]. This notably deviates from the principles of time-invariance and linearity. Under these circumstances, ventilation is not determined by ventilatory drive, rather by the degree of upper airway patency. If ventilatory supply cannot match the demand required, the ventilatory drive significantly increases [4].
There are two primary assumptions that assist with the determination of oscillatory sleep patterns. The first point explains that ventilation responses are determined by the ventilatory demand. Inherently, when an individual experiences periodic hypoventilation and their carbon dioxide concentration increases, it leads to a linear increase in ventilatory drive [17]. Secondly, the mechanical components of respiration and ventilatory control remain comparatively constant across breathing cycles [4][17]. These two principles comprise the models that predict the smooth sinusoidal oscillations as observed in Cheyne–Stokes breathing.
OSA is notably a departure from the typical ventilatory pattern of smooth oscillations in airflow. It has been shown that obstructive apneas are characterized by dynamic pharyngeal obstruction during sleep with abrupt re-opening upon arousal [18][19]. The patency of the upper airway is quickly restored when arousal occurs, or apnea terminates, as it moves from a flow-limited-state to a non-flow-limited state [4]. These repetitive demonstrations of mismatch between ventilatory demand and ventilatory supply, created by the mechanoreceptors, chemoreceptors, ventilatory drive, and transition between the flow limited state and non-flow limited state in the upper airway, are the primary mechanism behind the oscillatory pattern in the disruption of sleep.
Interventions such as surgical interventions, positional therapy, oral sleep appliances, and pharmacotherapy conjointly assist with combating the disturbances of upper airway mechanical loads or neuromuscular compensations [20]. A comprehensive approach to treatment with multidisciplinary knowledge of the multiple intrinsic features that are responsible for upper airway collapsibility is crucial when treating these airway abnormalities [21].

More
© Text is available under the terms and conditions of the Creative Commons Attribution (CC BY) license (http://creativecommons.org/licenses/by/4.0/)
Upload a video for this entry
Information
Subjects: Respiratory System
Contributor MDPI registered users' name will be linked to their SciProfiles pages. To register with us, please refer to https://encyclopedia.pub/register :
Catherine Kier
View Times: 50
Revisions: 2 times (View History)
Update Time: 29 Nov 2021
Table of Contents
1000/1000
Hot Most Recent