Submitted Successfully!
Thank you for your contribution! You can also upload a video entry related to this topic through the link below:
https://encyclopedia.pub/user/video_add?id=16419
Check Note
2000/2000
Ocular Sporotrichosis
Edit
Upload a video
This entry is adapted from 10.3390/jof7110951

Sporotrichosis is a subacute or chronic mycosis predominant in tropical and subtropical regions. It is an infection of subcutaneous tissue caused by Sporothrix fungus species, but occasionally resulting in an extracutaneous condition, including osteoarticular, pulmonary, nervous central system, and ocular disease. Cases of ocular sporotrichosis are rare, but reports have been increasing in recent decades. Ocular infections usually occur in hyperendemic areas of sporotrichosis. For its classification, anatomic criteria are used. The clinical presentation is the infection in the ocular adnexal and intraocular infection. Ocular adnexa infections include palpebral, conjunctivitis, and infections of the lacrimal sac. Intraocular infection includes exogenous or endogenous endophthalmitis.

Sporotrichosis is a subacute or chronic infection predominant in the subcutaneous tissue [1]. It is caused by Sporothrix species fungal and is predominant in tropical and subtropical regions [2][3]. Most cases are reported from Brazil, China, Peru, and Mexico [2][4]. The upper limbs, lower limbs, and the face are affected [1][3]. Occasionally, it can also result in an extracutaneous infection, including osteoarticular, pulmonary, nervous central system, and ocular infection [4][5][6][7]. Ocular infection due to Sporothrix manifests with a lesion in the ocular adnexa or the deep eyeball structures, causing endophthalmitis [8][9]. Cases of ocular sporotrichosis are rare, but reports have been increasing in recent decades [8][9][10][11][12].

Sporotrichosis is a significant health problem in tropical and subtropical regions. Sporotrichosis has a wide geographic distribution worldwide, but most cases have been reported in retrospective studies from Brazil, China, Mexico, and Peru (Figure 1) [2][4][13][14][15][16]. Sporotrichosis has been described in humans and animals like cats in Brazil, the United States, Malaysia, and Argentina. Isolated cases in cats also have been reported in Germany, Japan, Mexico, Spain, India, and Australia [17][18][19][20]. Brazil seems to be the most endemic country for sporotrichosis in the world. More than 5000 human cases and 5113 feline cases have been reported in Brazil from 1998 to 2018 [13]. In retrospective studies from China, 2000 cases were recorded in 9 years [14], and more than 1800 cases in Peru [21]. Ocular infections due to Sporothrix occur in hyperendemic areas. Most infections in the eyelid have been reported in China and Peru [8][11], and conjunctival sporotrichosis in Brazil, a hyperendemic area of zoonotic transmission [12]. Intraocular infections are limited to the USA and Brazil (Figure 1) [9]. Ocular sporotrichosis affects all age groups and both sexes [8][9][11][12]. Although Sporothrix can enter the skin or eye via a traumatic inoculation with vegetal material or a wood splinter, or contact with cats or cats with sporotrichosis, most cases occur in the absence of predisposing factors. 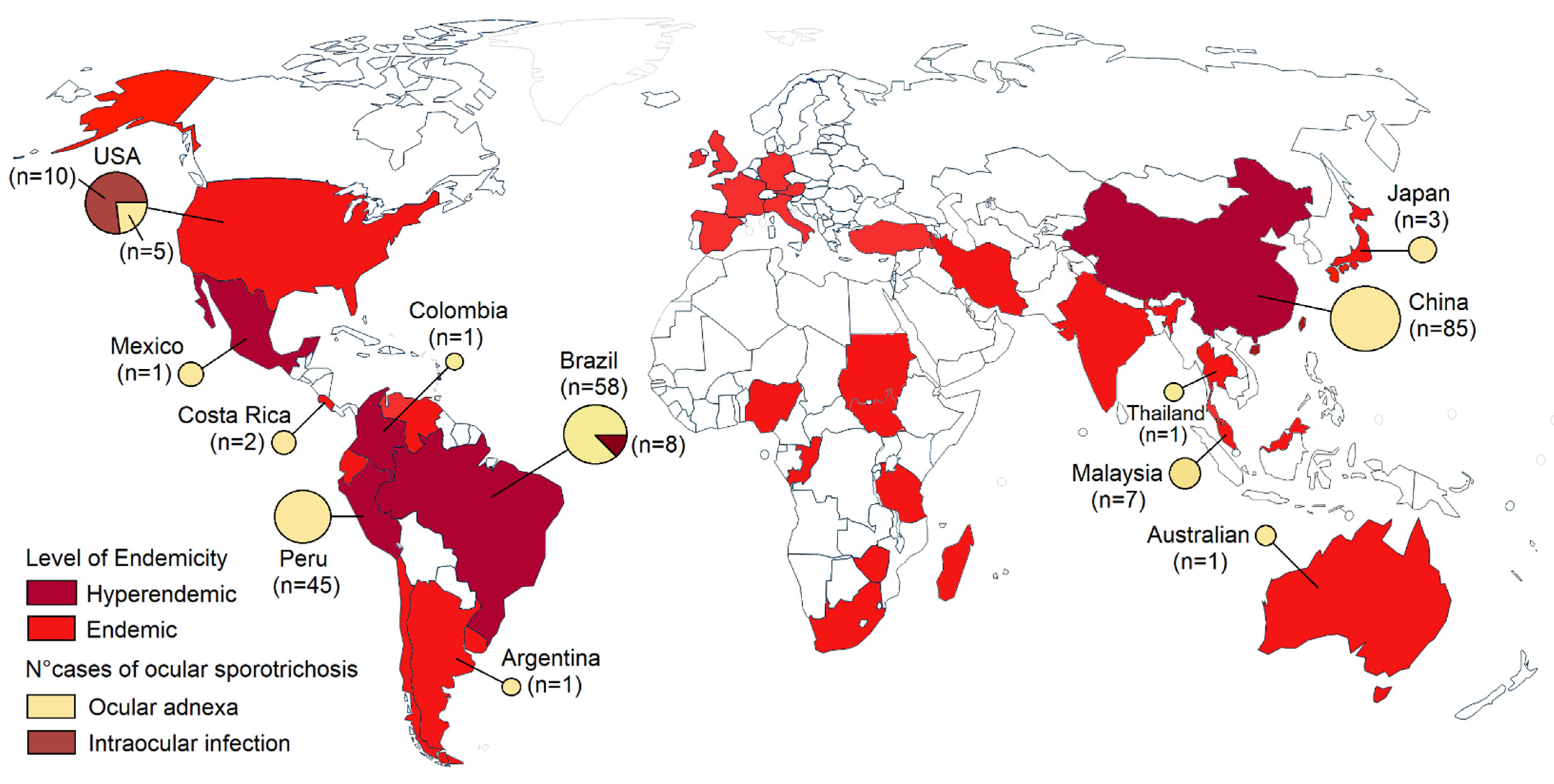 Figure 1. Map of the global distribution of sporotrichosis and cases of ocular sporotrichosis published in the literature.
Infections are usually caused by S. schenckii, S. globosa, and S. brasiliensis. Rare pathogens include S. pallida and S. mexicana. S. globosa causes about 99.3% of cases in Asia, 94% in Australia and South Africa by S. schenckii, 88% in Brazil by S. brasiliensis, and 89% in South and Central America and North America by S. schenckii [2][3]. All these species grow in the soil at temperatures of 6.6–28.84 °C and 37.5–99.06% humidity, and associated with a variety of plants, flowers, decaying material, woody debris, reed leaves, corn stalks, leaves, and wood crumbs, potentially facilitating its establishment and proliferation in the environment [22]. S. schenckii and S. brasiliensis constitute the causal agents of ocular sporotrichosis [8][9][11][12], but the causal agent has not been typified in most cases. Additionally, a case of fungal keratitis was caused by S. pallida, a rare human pathogen [23]. 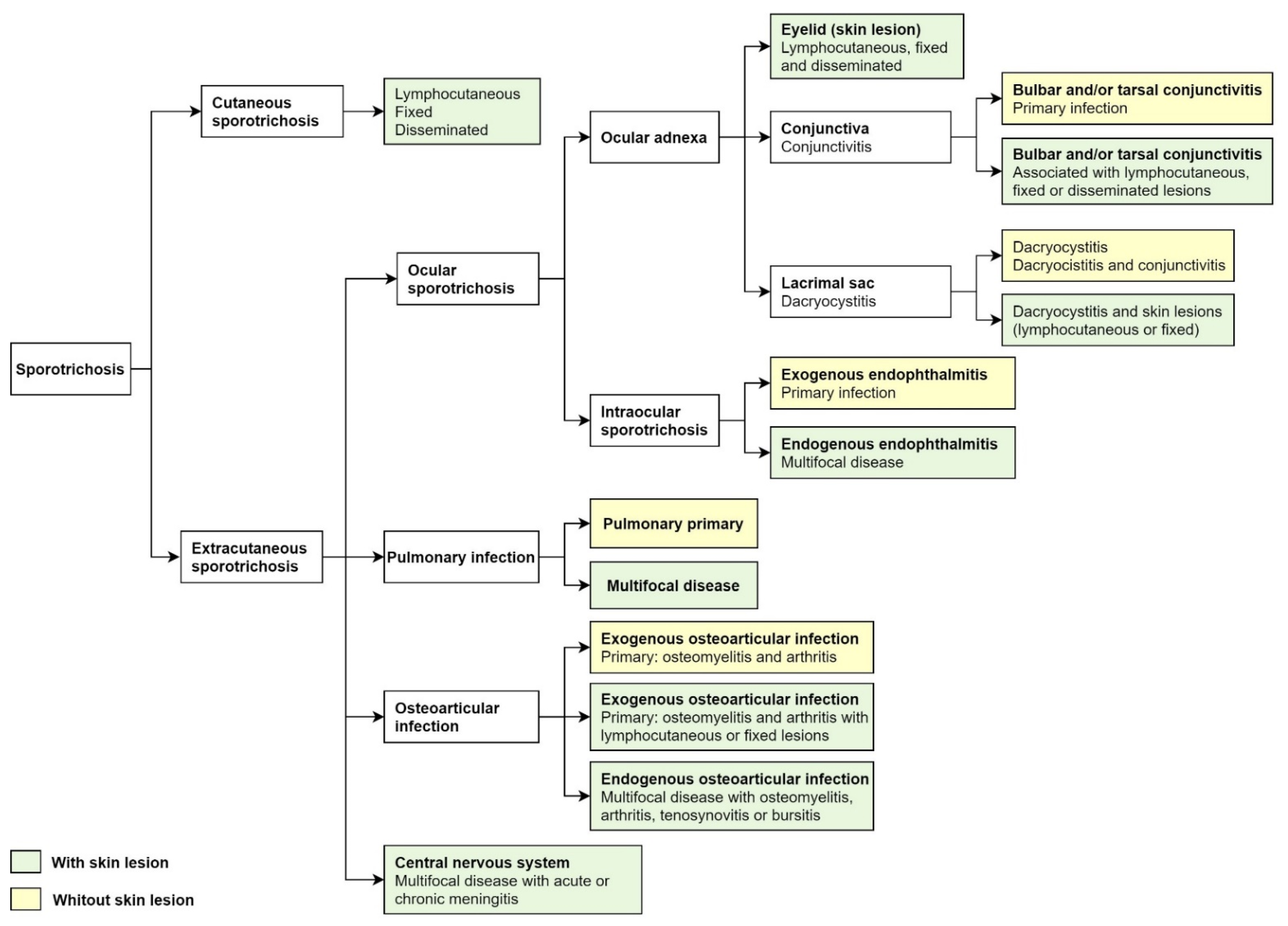 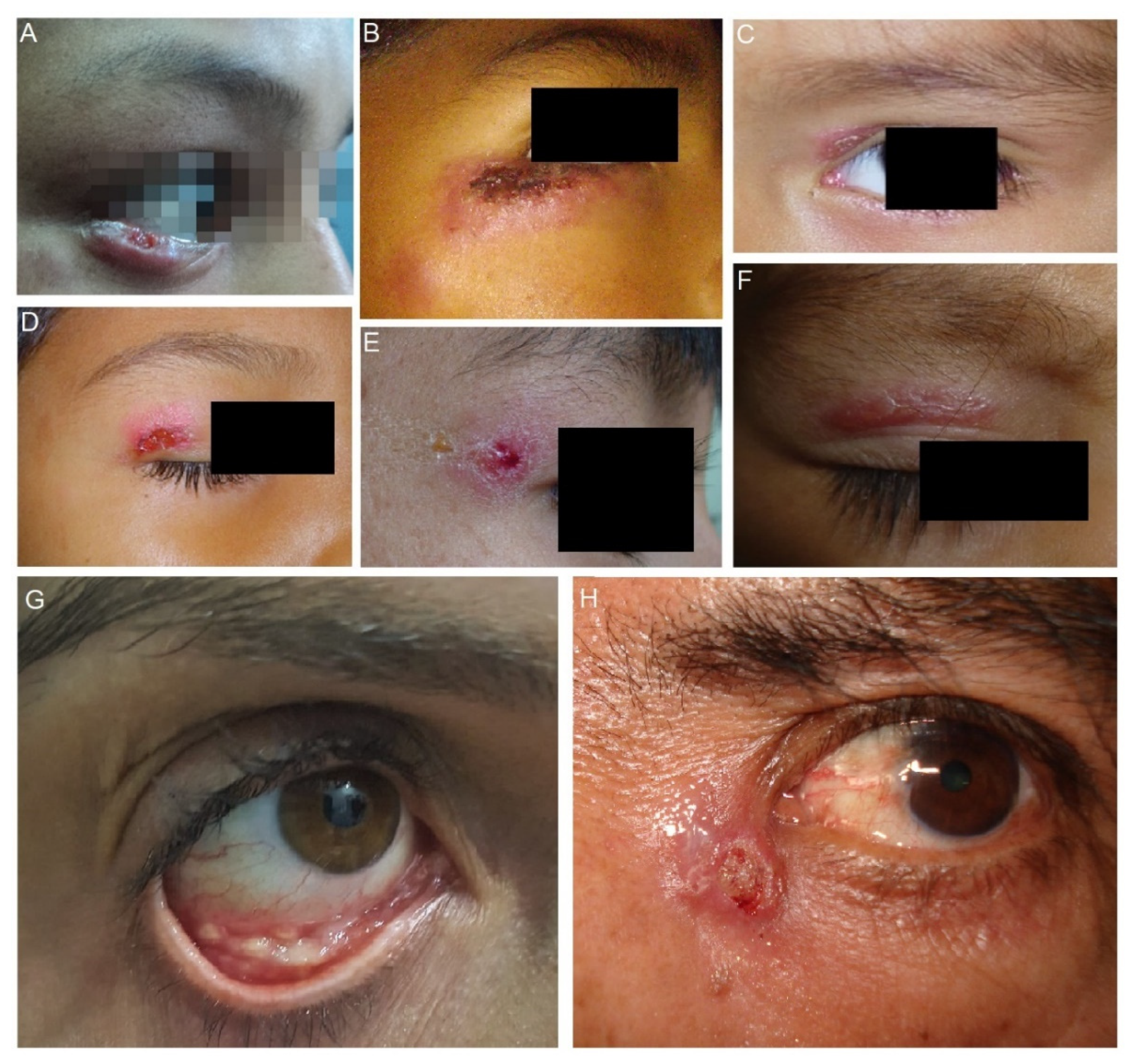 The gold standard for diagnosis of ocular sporotrichosis includes the isolation and identification of the etiological agent. Biological material is usually obtained from exudate in lesions, scales, tissue fragments, a biopsy of the cutaneous lesion in palpebral lesions, or swabs from the conjunctival mucosa [8][11][12]. Biological material in intraocular infections includes vitreous and aqueous humor samples, scleral and corneal scraping, and purulent eye discharge [9][25][26][27][28][29][30][31][32][33][34][35]. The usual Sabouraud dextrose agar with or without antibiotics, incubated at 28 °C, is the most used; colonies appear in an average time of five to eight days. Sporothrix sp. colonies develop in three to five days, being limited, membranous, radiated and whitish, beige, or pigmented (but not included in the black fungi group) [1][5][36]. Species most commonly isolated in the ocular infections are S. schenckii, Sporothrix spp. [8][11][12][25][26][27][28][29][30][31][32][33][34][35], S. brasiliensis in Brazil [37][33][34], and S. globosa in China [38].
In the patient samples, the observation of Sporothirx spp. yeasts are made with direct or fresh examination with conventional stains including Giemsa, PAS, and Grocott (KOH (10%) or NaOH (4%) is rarely used due to poor results); the observation of yeast in cigar-shaped buds or small boats is characteristic, but infrequently seen (5–10%), except in disseminated cases and immunosuppressed patients. Cat and dog cases have many yeasts; however, this is frequent only in the ocular conjunctiva samples in human subjects [1][5][10][12][39].
Like direct examination, biopsy (skin) is not pathognomonic; on rare occasions, asteroid bodies with yeasts may appear. In general, the histopathological image is a combination of suppurative granulomatous conformation and pyogenic reaction, and to a lesser extent, a tuberculoid granuloma can be observed. Large numbers of yeast can only be observed in disseminated cases that affect the eye and adjacent structures [5][36].
Other supporting tests are the intradermal reaction (IDR) with sporotrichin M (mycelial); it should be noted that it is not a standardized test (performed in-house), and in many countries, it is not authorized. It is carried out with the polysaccharide metabolic fraction of S. schenckii (peptide-rhamnomannan); it is applied intradermal (dilution 1:2000, averaging 5 × 107 cells/mL) [5][36][40]. The reading is done with the same criteria as the PPD. This test is immensely guiding in above 90%. Serology has little value, more useful in disseminated cases; the most used techniques are precipitins, agglutinins, and complement fixation [1][5].
Molecular biology is of great importance in the identification of strains from tissue samples (biopsies) through the amplification of DNA fragments, with PCR tests (chitin synthetase gene, ChS1, 26S rDNA gene, and topoisomerase II gene), and PCR-RFLP (polymerase chain reaction-restriction fragment length polymorphism) [1][36]. Proteomic identification, particularly with MALDI-TOF MS techniques, makes it possible to effectively and rapidly identify the five species of Sporothrix [1][36].

Like cutaneous sporotrichosis, the primary ocular condition or associated by extension of cutaneous or disseminated cases is managed as follows: Itraconazole is the drug considered of choice by the North American Guidelines for the Treatment of Sporotrichosis, especially for lymphangitic and disseminated cases, and it is regarded as the first option in ocular disease cases [41]. It is used at doses of 100–300 mg/day, depending on the weight and conditions of the patient; the treatment time fluctuates between four and six months, with minimal collateral effects, and it is essential to mention that its absorption depends on gastric pH and food [5][41].
Another highly active drug is potassium iodide (KI). It is the therapy of choice in underdeveloped countries due to its excellent efficacy, low side effects, easy administration, and low cost [1][5][42]. It is generally managed in a saturated solution of KI and drops starting with 2–20 three times a day; in the various series, tanning is obtained within 2–3 months of treatment; there are some cases with rapid responses (15 days). In general, the most critical side effect is gastritis, and to a lesser degree, rhinitis, bronchitis, urticaria, and erythema nodosum. It should be mentioned that KI is prepared as a magisterial formula. In disseminated cases and immunosuppressed patients, they do not respond [42][43][44]. In ocular cases, it also has been administered in combination with KI and itraconazole, especially in those that did not respond well to monotherapy [45].
Amphotericin B is the treatment of choice for systemic, disseminated sporotrichosis cases and must be administered in the hospital. Management with liposomal amphotericin B is suggested, at a standard dose of 3 mg/kg/day, with a range of 3–5 mg/kg/day. For amphotericin B deoxycholate the dose is 0.25–0.75 mg/kg/day. Treatment time is variable and depends more on side effects (kidney) [1][5][41]. Systemic amphotericin B alone or in combination with an oral antifungal is the treatment most commonly used in intraocular infections. It can also be used the intravitreal and systemic antifungal or amphotericin B. It is important to note that for the management of amphotericin B, the patient must be hospitalized, and remember that the most important collateral effects are phlebitis and especially kidney damage; for topical management, it is usually an irritating drug in the mucous membranes [9][41]. The subconjunctival and oral agents show poor intraocular penetration; therefore, intravitreal and systemic antifungal therapy should be considered in cases of endophthalmitis. Cases of exogenous endophthalmitis have worse ocular outcomes and complications compared with endogenous endophthalmitis. The endophthalmitis complications include blindness and irreversible vision loss [9][26][27][28][29][30].
Another of the drugs used is terbinafine, at doses of 250–500 mg/day; the responses are variable, and it is considered a less active drug than itraconazole but with fewer drug interactions and side effects [1][5]. There are varying results with the administration of fluconazole; its dose is 200–400 mg/day [1]. The use of corticosteroids in cases surrounding the eye is beneficial to avoid the appearance of keloid and fibrous lesions, and they should always be associated with systemic antifungals. The most widely used is prednisone at doses of 10–25 mg/day [5].

More
© Text is available under the terms and conditions of the Creative Commons Attribution (CC BY) license (http://creativecommons.org/licenses/by/4.0/)
Upload a video for this entry
Information
Subjects: Infectious Diseases
Contributor MDPI registered users' name will be linked to their SciProfiles pages. To register with us, please refer to https://encyclopedia.pub/register :
Max Carlos Ramírez-Soto
View Times: 51
Revisions: 3 times (View History)
Update Time: 03 Dec 2021
Table of Contents
1000/1000
Hot Most Recent