Submitted Successfully!
Thank you for your contribution! You can also upload a video entry related to this topic through the link below:
https://encyclopedia.pub/user/video_add?id=16343
Check Note
2000/2000
Starch-Based Materials
Edit
Upload a video
This entry is adapted from 10.3390/molecules26226880

Starch is one of the most common biodegradable polymers found in nature, and it is widely utilized in the food and beverage, bioplastic industry, paper industry, textile, and biofuel industries. Starch has received significant attention due to its environmental benignity, easy fabrication, relative abundance, non-toxicity, and biodegradability.

Starch is a natural biopolymer extracted from plant sources and is a principal component in food formulations. It provides energy to humans by releasing glucose during cellular respiration [1]. Starch is also utilized in various applications, including food, polymer, paper, textile, laundry finishing products, and biofuel productions [2]. Due to the environmental impact caused by petroleum-based plastics, biopolymer-based plastics or bioplastics have been widely considered a sustainable alternative. The most commonly used bioplastics are starch blends, polylactic acid (PLA), polyhydroxyalkanoates (PHA), polybutylene succinate (PBS), poly (butylene adipate-co-terephthalate) (PBAT,) and polytrimethylene terephthalate (PTT). Among those many different biopolymers, starch possesses intriguing characteristics such as its relative abundance, low cost, biodegradability, surface functionalization, renewability, and non-toxicity [3]. According to the European bioplastic market data (2019), starch could fulfil about 21.3% of global biopolymer requirement in 2019, indicating its high demand over the recent years; see Figure 1.
Starch is mainly composed of amylose (80%), amylopectin (20%), lipid, protein (0.6%), and a small quantity of minerals (<0.4%) [4]. The amount of amylose and amylopectin varies according to the source of starch [3]. Amylose is insoluble in water, whereas amylopectin is soluble in water [3]. Starch also contains a small fraction of compounds known as “intermediate compounds,” which have intermediate properties of both amylose and amylopectin [5]. The molecular weight of amylose is around 105–107 Da, while amylopectin has a molecular weight of 107–109 Da. Moreover, the molecular weight of the intermediate compound is less than amylopectin and higher than amylose [5]. 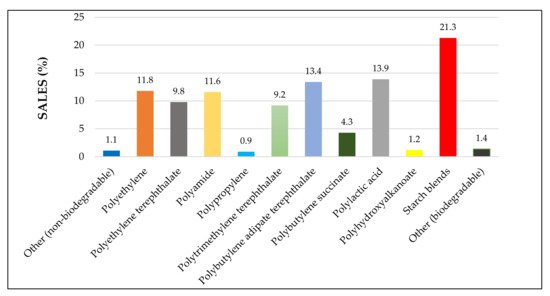 Genetic modification of starch is a technique that involves transgenic technology. Genetic modification can be carried out using traditional plant breeding techniques or biotechnology. This technique uses the enzymes involved in starch biosynthesis [7]. Generally, plants, animals, and organisms, including bacteria and fungi, contain genes for enzymes that engage in starch biosynthesis. These genes can be used to produce genetically modified microorganisms, which produce those enzymes for starch modifications. For example, modified starch with amylose-free, high amylose content, or waxy rice starch consists of 0 to 3% of amylose can be produced via genetic modification processes [8].
Amylose-free starch has widely been tested as water binders, viscosity builders, and texturizers, mainly in food and other industrial applications. However, this starch is less resistant to shear, acid, and high temperatures than native starch, forming cohesive pastes with extended cooking [7]. High-amylose starch in cereals is produced via a genetic mutation of the gene that encodes the starch-branching enzyme, known as the amylose extender (ae) mutant. This ae mutant lacks the starch branching enzyme, resulting in longer amylose chains. Starch with high amylose content is an essential precursor for developing polymer coatings that are resistant to enzymatic degradation. Moreover, these coatings can also be used in colon cancer targeted drug delivery systems [9].
Bull et al. [10] investigated the effect of breeding techniques in transgene-free progeny cassava plants. The authors reported that the potential use of genetically modified starch varieties in food applications. Furthermore, Zhao et al. [11] prepared genetically modified potatoes with high cellulose, amylose, and less pectin. Moreover, Li et al. [12] explored the effect of the transgenic technique on the bioavailable vitamin B6 in cassava starch.

During enzymatic modification, starch is exposed to enzymes (hydratases) that accelerate the production of highly functional derivatives [13]. The enzymatic modification technique is mainly used to prepare glucose syrup, high fructose corn, or cassava syrup. The primary function of enzymatic modification is the depolymerization of starch into oligosaccharides or the transformation of starch by transferring glycosidic linkages and residues [13]. The role of the enzyme during this modification technique is breaking down the α-1,4 bond between two glucose units [7]. Enzymatically modified starch is utilized in foodstuffs, cosmetics, pharmaceuticals, detergents, adhesives, and drilling fluids [7]. The main four types of starch converting enzymes are (i) endoamylses, (ii) exoamylases, (iii) debranching enzymes, and (iv) transferases [7].
Among the four types of starch converting enzymes, debranching enzymes are widely employed in the industry. Figure 2 demonstrates the enzymatic hydrolysis of starch. As depicted in Figure 2, pullulanase, isoamylase, and oligo-1,6-glucosidase are mainly used to debranch the α-1,6-glycosidic bonds in starch, giving linear amylose, whereas amylosucrase, α-amylase, and amylomaltase are capable of debranching the 1,4 and 1,6 glycosidic bonds, resulting in small amylose or amylopectin chains. 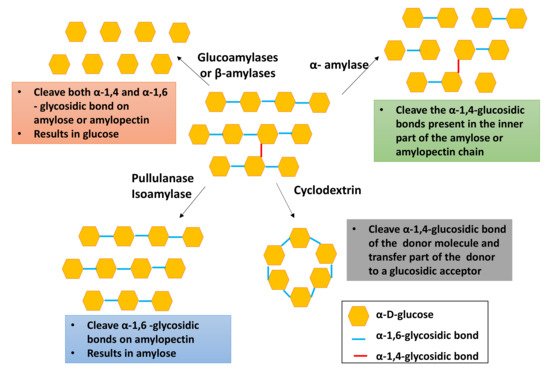 Figure 2. Enzymatic hydrolysis of starch.
According to Figure 2, exoamylases such as glucoamylases, α-glucosidases, and β-amylases are used to produce glucose, whereas cyclodextrin cleaves the α-1,4-glycosidic bond while connecting both reducing and nonreducing ends. The isoamylase enzyme has higher enzymatic activity compared to that of other enzymes [13]. Pullulanase is widely employed to prepare high-amylose starch utilized in adhesive products, resistance starch, corrugated boards, and the paper industry [13].
Besides the previously mentioned enzymes, lipase and protease are also used for starch modification [14]. These enzymes are widely utilized to catalyze starch acetylation and achieve modified starch with high purity [15]. Gill et al. [16] reported the green synthesis of corn starch-maleate using the lipase enzyme as a biocatalyst and maleic acid as an esterification agent. Adak et al. [17] prepared esterified starch using lipase and ionic liquid.

The physical properties of the starch can be modified using physical processes. Physical processes are generally divided into thermal and non-thermal treatments [18].
Usually, physically modified starch is considered natural as opposed to chemically modified starch [18]. Physical modifications are more accessible and often less expensive than chemical modification techniques and produce no effluents containing salts, reagents, or reagent by-products [19]. In general, physical treatments destroy the arrangements of the starch molecules within granules. Even though the properties of physically treated starch are the same as in native starch, they are not as thermostable as the starch obtained through chemical modification [20]. Thermal treatment, including annealing, microwave radiation, pre-gelatinization, and heat–moisture treatment (HMT) [21], are the most widely applied physical processes. The microwave-assisted treatment is commonly applied during the preparation of films from starch. Generally, microwave-assistant treatment increases water solubility and decreases the crystallinity, viscosity, and transparency of starch [22]. In addition, the microwave-assisted treatment has several advantages such as energy-saving, high conversion, and rapidity [23]. Souza et al. [24] prepared cassava starch-based biodegradable films using the microwave-assistant method. The authors also reported the use of clay nanoparticles as a reinforcement material to develop cassava starch-based biodegradable packaging materials. Zhao and coworkers investigated the effectiveness of the combination of microwave treatment and chemical modification techniques. The authors reported improvements in the degree of substitution, structural, and physicochemical properties of potato starch esters obtained by microwave pretreated esterification [25]. 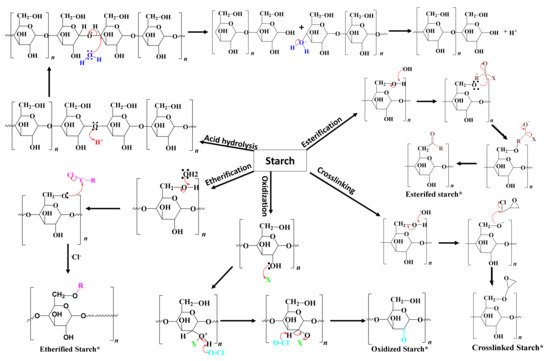