Submitted Successfully!
Thank you for your contribution! You can also upload a video entry related to this topic through the link below:
https://encyclopedia.pub/user/video_add?id=16313
Check Note
2000/2000
Mitochondrial Redox Metabolism
Edit
Upload a video
This entry is adapted from 10.3390/antiox10111838

Mitochondrial redox metabolism is the central component in the cellular metabolic landscape, where anabolic and catabolic pathways are reprogrammed to maintain optimum redox homeostasis. During different stages of cancer, the mitochondrial redox status plays an active role in navigating cancer cells’ progression and regulating metabolic adaptation according to the constraints of each stage. Mitochondrial reactive oxygen species (ROS) accumulation induces malignant transformation. Once vigorous cell proliferation renders the core of the solid tumor hypoxic, the mitochondrial electron transport chain mediates ROS signaling for bringing about cellular adaptation to hypoxia. Highly aggressive cells are selected in this process, which are capable of progressing through the enhanced oxidative stress encountered during different stages of metastasis for distant colonization. Mitochondrial oxidative metabolism is suppressed to lower ROS generation, and the overall cellular metabolism is reprogrammed to maintain the optimum NADPH level in the mitochondria required for redox homeostasis. After reaching the distant organ, the intrinsic metabolic limitations of that organ dictate the success of colonization and flexibility of the mitochondrial metabolism of cancer cells plays a pivotal role in their adaptation to the new environment.

The dynamics of oxidative stress navigates the cancer cell throughout its progression in different stages- where higher reactive oxygen species (ROS) favor malignant transformation, then decrease during tumor formation to the optimum level required for maintaining cellular redox homeostasis. It again increases during hypoxia and selects for aggressive metastatic cells. These cells are capable of withstanding the highly stressful steps of metastasis and the oxidative environment of the blood circulation. The redox status of the metastatic cells dictates successful colonization in distant organs [1][2][3]. Technical challenges in their detection and modulation in vivo have greatly limited our understanding on their role [4]. The dynamics of ROS during cancer progression are reciprocated in the level of TIGAR (TP53-induced glycolysis and apoptosis regulator), which is the P53-induced modulator for cellular adaptation to oxidative stress-increasing NADPH production and heightening the antioxidant defense. In pancreatic ductal adenocarcinoma development, during the early stages, high TIGAR levels are needed to mitigate the ROS associated with transformation. Then, as the tumor progresses, decreasing levels of TIGAR appear to increase the malignancy of cancer cells consistent with the selection for invasive cells with a higher ROS scavenging capacity. At a later stage, the TIGAR levels go up again to buffer the oxidative stress experienced by metastatic cells [5]. Cancer cells need to develop higher ROS scavenging capabilities to maintain their required level for initiation, adaptation and progression and mitigate toxic accumulation [6][7][8].
The alteration of oxidative stress is associated with the reprogramming of cellular metabolism during different stages of cancer progression to maintain redox homeostasis and support the metabolic demand imposed in each stage [9]. Mitochondrial redox metabolism resides at the epicenter of this process and orchestrates different aspects of cellular metabolism for adaptation and, in association with generating ROS signaling actively, drives cancer cells’ progression through tumor development, metastasis and colonization in distant organs [10][11]. The role of mitochondria in cancer development is primarily focused on mutations in genes in TCA cycle enzymes, namely succinate dehydrogenase (SDH), fumarate hydratase (FH) and isocitrate dehydrogenase 2 (IDH2), leading to the accumulation of succinate, fumarate and 2-hydroxyglycerate (2HG). These metabolites mediate epigenetic changes leading to the development of some subtypes of cancer. When the mitochondrion is viewed in the context of its role in ROS signaling and reprogramming cellular metabolism, its impact is much more complex and substantial in different stages across all types of cancer [12][13][14].

The mitochondrial electron transport chain (ETC)-mediated inner membrane electrochemical gradient drives oxidative phosphorylation for energy production. It is also the primary component for generating mitochondrial reactive oxygen species (ROS) and maintaining the redox balance (Figure 1). In a situation where the sequential movement of electrons through the ETC is delayed or halted or ATP synthase is inhibited, creating increased membrane hyperpolarization, it causes the electrons at complexes I, II and III to interact with O2 to form a superoxide [2][15]. Due to the structural organization, complex III is the primary site that can produce superoxide in the intermembrane space. The Fenton reaction produces a highly reactive hydroxyl radical via the reaction between Fe(II) and hydrogen per oxide (H2O2). This may interact with lipid species and generate lipid peroxyl radicals. Several enzymes in the mitochondria that participate in oxidation-reduction reactions, namely the 2-oxoglutarate dehydrogenase (OGDH), branched-chain 2-oxoacid dehydrogenase (BCKDH) and pyruvate dehydrogenase (PDH) complexes, may also contribute to ROS generation [16]. 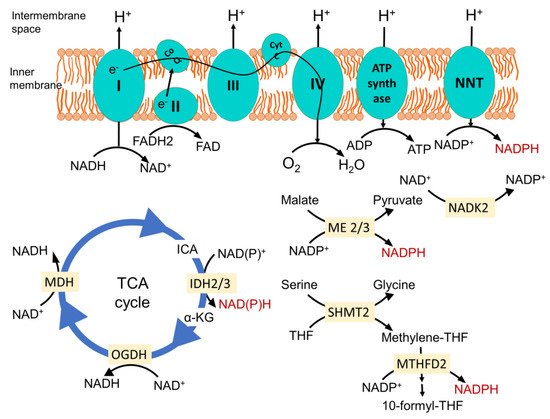