Submitted Successfully!
Thank you for your contribution! You can also upload a video entry related to this topic through the link below:
https://encyclopedia.pub/user/video_add?id=16170
Check Note
2000/2000
Plant Extracts as Natural Antioxidants in Meat
Edit
Upload a video
This entry is adapted from 10.3390/antiox10091465

The meat industry’s focus is shifting towards antioxidants that are novel, efficient, economical, green, or natural alternatives to potentially harmful synthetic preservatives. There has been an ever-increasing effort by the meat industry to explore novel, effective and edible antioxidants and antimicrobials compounds obtained from natural sources. Recently, there have been renewed interests in applying natural compounds (plant extracts, herbs, spices) in food preservation. Since ancient times, these additives have been added to foods as flavorings/seasonings, folk medicine, and food preservatives owing to antioxidant, bacteriostatic or bactericidal properties of polyphenolic compounds, and essential oils. The consumption of these compounds is known to exert beneficial effects on consumer’s health in addition to their preservative role. These herbs, spices, essential oils, or plant extracts exhibit various protective actions against the occurrence of diseases, and thus are widely used as potential green alternatives to food additives, preservatives, and dietary supplements.
Natural antioxidants are safe to consume, available in large quantities at a relatively lower price than their synthetic counterparts, and can be extracted and applied in the meat industry [1]. These compounds are abundantly present in the vegetable kingdom, such as in spices, herbs, and essential oils, with their concentration varying in throughout a plant, for example bark in the cinnamon and arjuna trees, the roots of liquorice, rosemary, cloves, and grape seeds, and the leaves of oregano and tea. Natural antioxidants are recognized as nutraceutical ingredients or supplements that can be used for raw meat and/or meat products [2]. The commonly used spices and herbs (such as oregano, rosemary, cinnamon, aniseed, fennel, basil, garlic, and ginger) are rich in phenolic compounds like phenolic acids, phenolic diterpenes, flavonoids, volatile oils, carnosic, caffeic, and chlorogenic acid. In their B rings, these polyphenols have 30–40 dihydroxy groups, and galloyl ester in the C rings of flavonoids can bind iron, making these compounds very potent antioxidants [3]. Phenolic compounds are lipid-soluble, owing to the hydroxyl group present in their chemical structure; they react with microbes’ cellular membranes, leading to loss of cell membrane integrity and, thus, antimicrobial effect. Fruits such as apple, plum, grape, pomegranate, and several types of berries, such as blueberries, cranberries, and bearberries, which are all good sources of antioxidants, owing to their high concentrations of flavonoids. 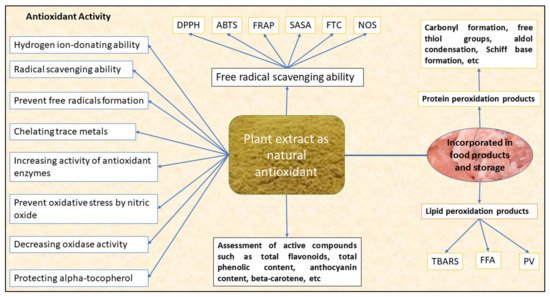