Submitted Successfully!
Thank you for your contribution! You can also upload a video entry related to this topic through the link below:
https://encyclopedia.pub/user/video_add?id=16066
Check Note
2000/2000
Microtransfer Printing Methods
Edit
Upload a video
This entry is adapted from 10.3390/mi12111358 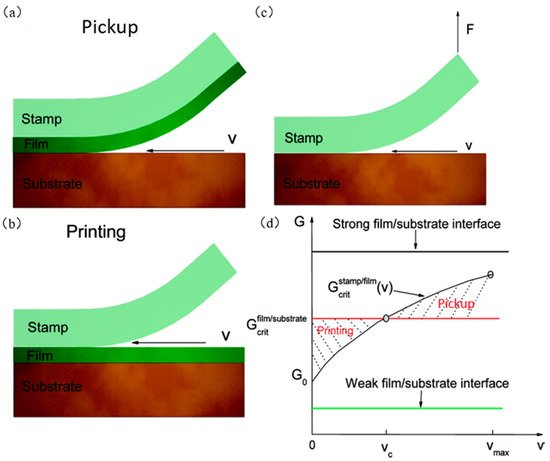 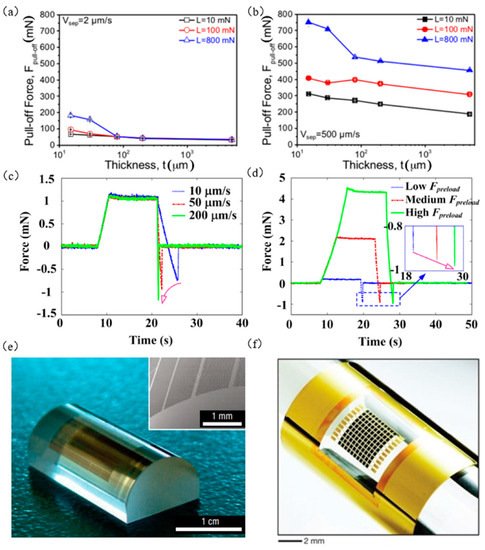 Saeidpourazar et al. [9] developed a laser-controlled seal temperature transfer printing technique by exploiting the differences in the thermodynamic parameters (coefficient of thermal expansion and thermal conductivity) of PDMS seals and inks. The specific process of this technology is shown in Figure 4a. The seal with a microstructure selectively picks up the ink on the donor substrate and then transfers the printing of the ink above the target substrate. Due to the transparency of the PDMS seal to the laser (805 nm), the pulsed laser glow focuses on the ink through the seal. The ink transmits heat to the PDMS seal through the seal/ink interface, raising the temperature of the ink and the seal. Due to the thermodynamic differences between the seal and the ink, finally, the seal/ink interface is layered to realize transfer printing. Li et al. [10][11] established the thermodynamic theoretical model shown in Figure 4a, which did not consider the influence of silicon wafer size. The relationship for the delamination time tdelamination seal/silicon interface is calculated as follows:

Figure 4. Laser-controlled seal temperature transfer printing technology. (a) Laser-controlled seal temperature transfer printing diagram (reproduced from [9]), (b) accurate interface fracture mechanics model diagram (reproduced from [12]), and (c) the peeling time scale rule of laser-controlled seal temperature transfer printing (reproduced from [12]).
In Formula (1), where qtotal is the total heat of the seal/silicon interface irradiated by the pulsed laser, hsilicon and Lsilicon are the thickness and width of the silicon wafer, cPDMS and csilicon are the specific heat, ρPDMS and ρsilicon are the mass density, λPDMS is the thermal conductivity, αPDMS is the coefficient of thermal expansion, and μPDMS is the shear modulus and the adhesion strength of the interface γ. The thermodynamic model does not apply to smaller silicon wafer sizes. Gao et al. [12] considered the influence of silicon wafer size and established an accurate interfacial fracture mechanics model (as shown in Figure 4b), which was used to derive the composite stress intensity factor, interfacial energy release rate, and critical delamination time, which eventually coincided with the finite element calculations, as shown in Figure 4c.
Eisenhaure et al. [13] took advantage of the SMP materials, which are rigid when the polymer is below the transition temperature Tg and can increase the adhesion strength of the seal. By replacing the traditional PDMS seal with an SMP seal, there are more options for seal design, and the analytical formula of seal plane stress is obtained: where E is the modulus of elasticity, L is the width of the seal, and γ0 is the adhesive strength. The finite element analysis is consistent with Formula (8), as shown in Figure 5a. They also compared the two seal surfaces (smooth seal surface and pyramid microstructure seal surface), which are more suitable for transfer printing. Figure 5b shows the relationship between the two types of seals and the plane stress at different stripping speeds. It is shown that the seal with a microstructure on the surface is more suitable for transfer printing.

Figure 5. The principle of laser-controlled seal temperature transfer printing technology. (a) The relationship between the elastic modulus and the plane stress of the seal (reproduced from [13]), (b) the relationship between the two types of seals and the plane stress at different peeling speeds (reproduced from [13]), (c) laser programmable selective transfer printing equipment setup diagram (reproduced from [14]), and (d) examples of successful transfer printing of straight, cross, and T-shaped patterns (reproduced from [14]).
Feng et al. [14] developed a laser programmable selective transfer printing method that uses a stepper-motor-controlled precision platform to control the displacement of the target substrate and uses laser heating of the SMP seal to achieve a high conversion of the adhesion force. Figure 5c shows the setting diagram of laser programmable selective transfer printing equipment. Figure 5d shows examples of successful transfer printing of linear, cross, and T-shaped patterns. Song et al. [15] used SMP materials to design a seal with a circular cavity, with a metal layer on the upper surface of the cavity as a heat absorption layer, and closed the air inside the cavity with a film with a microstructure. The transfer printing process is shown in Figure 6a. Figure 6b shows the stress relationship diagram at different elevated temperatures. Kim et al. [16] prepared an SMP seal with a carbon black composite material (as shown in Figure 6c), which greatly improved the heat transfer rate by taking advantage of the material’s absorption of infrared laser light. At the same time, it also solves the limitation that the ink must be a laser-absorbing material for the laser transfer printing process and saves the complicated steps of calculating the laser power required for different ink materials and geometric shapes. Figure 6d shows an example of selective printing of gold-plated silicon wafers that do not absorb infrared laser ink. 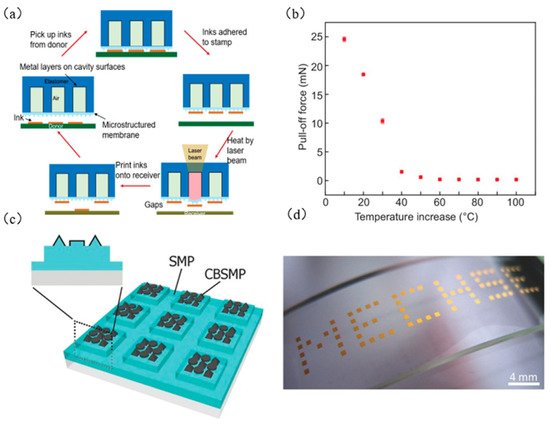 More
© Text is available under the terms and conditions of the Creative Commons Attribution (CC BY) license (http://creativecommons.org/licenses/by/4.0/)
Upload a video for this entry
Information
Subjects: Agricultural Engineering
Contributor MDPI registered users' name will be linked to their SciProfiles pages. To register with us, please refer to https://encyclopedia.pub/register :
Li Zhang
View Times: 48
Revisions: 2 times (View History)
Update Time: 18 Nov 2021
Table of Contents
1000/1000
Hot Most Recent