Submitted Successfully!
Thank you for your contribution! You can also upload a video entry related to this topic through the link below:
https://encyclopedia.pub/user/video_add?id=15977
Check Note
2000/2000
Si-Based GeSn
Edit
Upload a video
This entry is adapted from 10.3390/nano11102556

Si-based integrated circuits (ICs), which are dominated by Si CMOS technology, have reached their physics limit. The influences of quantum effects, parasitic parameters, and process parameters on data transmission applications are also reaching their limits, as the rapid development of microelectronics has led to higher requirements for data transmission technology. For these reasons, scientists have proposed schemes to integrate optoelectronic devices with microelectronic devices [1][2][3][4][5][6]. However, Si-based on-chip integrated light source was lacking, and the light sources for existing optoelectronic integrated circuits (OEICs) were all externally coupled; though the coupling efficiency between the edge of the light source and grating coupler was high enough, the lack of an on-chip light source restricted OEICs’ applications [7][8][9]. As such, many research programs started to pay more attention to Si-based monolithic OEIC technology [10][11][12][13][14], which has the following advantages over the baseline technology: (i) it is compatible with mature Si CMOS technology; (ii) has low costs; (iii) has larger wafer sizes and larger scale production; (iv) its partial electrical interconnection can be replaced by optical interconnection, which can realize high-efficiency, high-speed, and low loss data transmission. Si-based monolithic OEIC technology uses Si-compatible semiconductor technology to integrate optoelectronic devices into Si chips in order to improve chip performance, extend chip function, and reduce costs. Though Si-based photonic devices, such as optical waveguides [15][16], photodetectors [17][18][19], optical modulators [20][21][22], and optical switches [23][24], have been successfully developed, it is difficult to achieve high-efficiency emission due to the facts that Si is an indirect bandgap semiconductor and its light emission efficiency is about five orders of magnitude lower than that of direct band gap III–V compound semiconductors. Thus, the need for an Si-based high-efficiency light source represents an important technical bottleneck in the development of Si-based monolithic OEICs. Therefore, looking for a direct bandgap semiconductor material that is compatible with the Si CMOS process is of great significance in the creation of large scale Si-based monolithic OEICs [25][26][27].

Group IV materials are compatible with the traditional Si CMOS process, and Si, SiGe, and Ge are commonly used as indirect band gap semiconductors despite not being suitable for light emission. Fortunately, tensile strain engineering and Sn-alloying engineering have enabled Ge to become a quasi-direct bandgap or direct bandgap material due to the small bandgap difference between its two minima in conduction bands (only 136 meV). Experimental research has shown an optical gain of 0.24% for tensile-strained n + -type Ge (the n-type doping level is 1 × 10 19 cm −3 ), which led to the creation of optically injected and electrically injected Ge lasers [28][29][30][31]. However, the threshold for a Ge laser is too high, which means that weak tensile-strained n + -type Ge is not able to supply enough optical gain to achieve low-threshold lasing.

Alongside the significant breakthroughs in GeSn growth and detectors, GeSn lasing had also developed to an advanced stage. Recently reported GeSn laser structures have all been grown via the CVD technique. Following the observation of a PL peak with narrowed line widths, a true direct bandgap GeSn material with an Sn content of up to 10% was experimentally demonstrated in 2014 [32]. Encouraged by this major technical breakthrough, researchers used the injection methods such as optical injection with a Ge laser to check the GeSn waveguide, and lasing behavior was clearly observed at a low temperature in 2015 [33]. Following this breakthrough, several types of GeSn lasers [34][35][36][37][38][39][40][41][42][43][44][45] were demonstrated, though they still suffer from the problems of low-temperature operation and high lasing thresholds. To overcome these difficulties, several methods have been proposed to improve performance, such as greater Sn incorporation into Ge [36][38][39], the use of SiGeSn/GeSn/SiGeSn heterostructures or SiGeSn/GeSn/SiGeSn MQWs as the gain medium [46][47][48][49], a modulation doping scheme in SiGeSn/GeSn/SiGeSn MQWs [50], defect management [43], and thermal management [44][45]. Considerable efforts in GeSn lasing research have led to an increased maximum lasing temperature of 270 K [39] due to the amazing discovery of strain relaxation growth mechanism [51]. Near-room-temperature lasing was also observed for a GeSn active medium with a 16% Sn content and high uniaxial tensile strain [40]. A breakthrough regarding the optical pumping threshold was reported in 2020, when a low-Sn-content GeSn material with a high uniaxial tensile strain was utilized as an active medium; continuous wave (CW) lasing was also achieved. However, the lasing temperature only reached 100 K due to the low directness of the active medium [43]. In the same year, electrically pumped GeSn/SiGeSn heterostructure lasers with operation temperatures of up to 100 K were demonstrated [52][53]; this was an essential achievement for Si-based electrically pumped group IV interband lasing.

To the best of our knowledge, there has yet to be a review article that systematically reported on GeSn material growth and counterpart optoelectronic devices using the CVD technique. UHVCVD [54][55][56][57], RPCVD [58][59][60][61][62][63], PECVD [64][65][66] , LPCVD [67][68][69][70], and APCVD [71][72] are discussed in this review, with a focus on identifying processes that can be transferred for the commercial production of GeSn. The objective of this comprehensive review article is to provide readers with a full understanding of the recent experimental advancements in GeSn material growth using CVD, as well as their optoelectronic applications. However, due to the large numbers of publications in this area, the authors of this work only selected articles with significant scientific impacts. 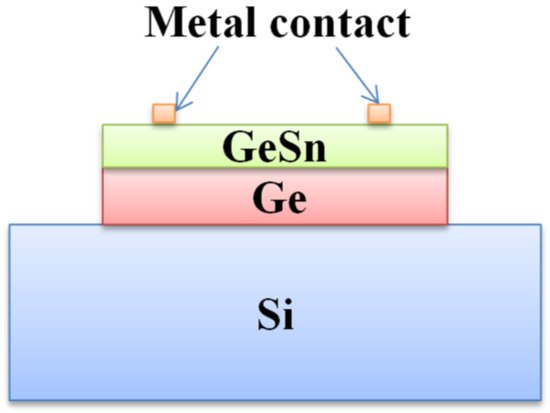 Figure 2 summarize the Sn content vs. cut-off wavelength for a reported GeSn PIN detector. For GeSn with an Sn incorporation of 2–11%, the PIN detector wavelength coverage was found to range from 1750 to 2650 nm, indicating that a GeSn PIN detector is very promising for SWIR applications. Due to the limitations of growth technology, PIN detectors at wavelengths from 2650 to 5000 nm have yet to be reported. 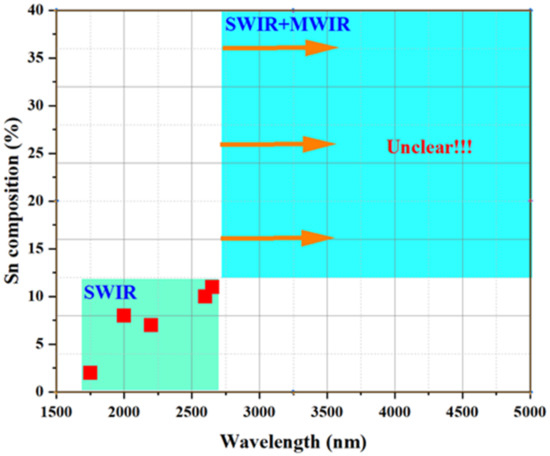 Since Si-based high-efficiency light sources comprise the technical bottleneck for Si-based monolithic optoelectronic integration, researchers have conducted extensive research into Ge and GeSn lasers. Ten years ago, the rapid development of the GeSn CVD growth technique enabled researchers from MIT to demonstrate optically injected and electrically injected Ge lasers at room temperature. The lasing thresholds of these laser devices were very high, which made it difficult to achieve efficient lasing. As a result, more attentions has been paid to the GeSn material due to its direct bandgap property. In this section, we review the latest research on GeSn lasers with different optical cavities, as well as their device performance.

The simplest optical cavity is that of Fabry–Pérot, which consists of two parallel reflecting surfaces that allow coherent light to travel through the whole cavity. Due to the directness difference between GeSn alloys with different contents, we summarize the reported operation temperatures for GeSn with different Sn contents in Figure 3 . Operation temperatures were found to increase with more Sn incorporation, indicating that operation temperature is closely related to the directness of GeSn. Different from narrow bulk devices, broad bulk devices (with a cavity width greater than 20 μm) possess higher operation temperatures, possibly due to the following two reasons: (1) they have higher optical gains, and (2) they are wider and thus have higher optical injection efficiencies. However, the operation temperature for a GeSn laser with 22.3% Sn incorporation was found to be the same as that of a GeSn laser with 17.5% Sn incorporation, which means that there were many point defects in the high-Sn-content GeSn layer. For clarification, we also summarize the devices performance for the published FP cavity optically pumped GeSn laser ( Table 2 ). 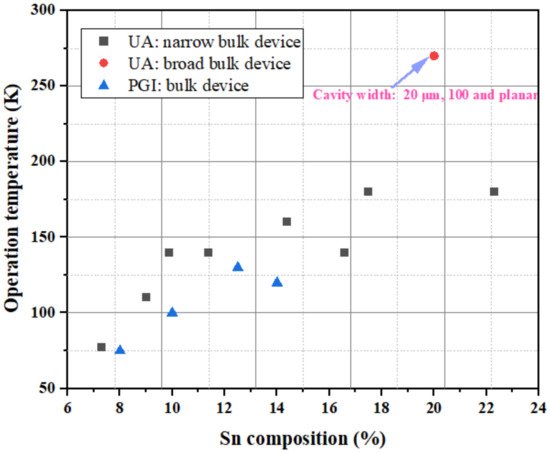 In addition to the rapid advancement of GeSn detectors and GeSn lasers grown by CVD technology, there have been some achievements in the field of GeSn transistors due to their mobility properties. In the hyper-scaling era, the quest for high-performance and low-power transistors is continuing and intensifying. One of the key technology enablers of these goals is that of channel materials with high carrier mobility and direct band gap structures [78][79]. GeSn films have emerged as the most promising candidate for next generation nano-electronic devices of computing due to their excellent properties, including ultrahigh hole mobility, band structures with direct and low band gaps, Si-based CMOS compatibility, and low thermal budget, all of which are of great importance for ultrahigh density devices and 3D integration in the hyper-scaling era. Anisotropy at the top of the GeSn valence band makes the effective mass of light hole rapidly decrease with increases of Sn content and the transport capacity rapidly increase. GeSn is a very promising channel material for the next generation pMOSFET, and its hole mobility is even higher than that of Ge. The hole mobility of Ge pMOSFET is increased by more than 10 times with respect to Si devices. In addition, compressive strain can improve the mobility of a GeSn channel by decreasing the effective mass of the hole carrier. GeSn is generally grown on Si substrates using Ge as the buffer layer, and GeSn subjects the Ge buffer layer to compressive strain since the Sn lattice constant is greater than that of Ge. As GeSn materials are compatible with Si-CMOS technology, a few research groups have studied GeSn-based transistors ( Table 3 lists the reported transistors with CVD-grown GeSn layers).

Tunnel-field-effect transistors (TFETs) features subthreshold swings (SS) below 60 mV/decade at room temperature, which also enable a decreased power supply without discounting the off-current. Although Si-TFETs have been reported with SS below 60 mV/decade at low current, band-to-band tunneling (BTBT) is limited by its indirect bandgap property and low SS at high current. Therefore, researchers have investigated GeSn with high Sn contents to create high-performance GeSn TFETs [87]. A higher Sn content enhances device performance, but the subthreshold swing is affected by the increased leakage level. For ultrasmall supply voltages, the device structure should be optimized to improve device characteristics. Using Ge/GeSn heterostructure pTFETs led to the improvements of the BTBT rate. Thus, higher on-current and lower off-current were achieved simultaneously. Christian et al. reported the fabrication and characterization of Ge/GeSn pTFETs, and they recorded a low accumulation capacitance of 3 μF/cm 2 [80]. Moreover, their room-temperature (RT) current–voltage characteristics showed that the Ge/GeSn pTFETs with the 11% Sn content had the highest BTBT current. To suppress the short channel effects (SCEs) of multi-gate transistors, Dianlei et al. investigated the p-FinFETs with a CVD-grown GeSn channel [81]. For GeSn p-FinFETs grown on GeSnOI substrates with 8% Sn incorporation, compressive strain and hole mobility were found to be −0.9% and 208 cm 2 /V·s, respectively. Record low SS of 79 mV/decade for GeSn p-FETs were also achieved.

Similar to the n–Ge material, n– GeSn suffers from a large resistance in metal-n– GeSn contacts mainly due to a strong Fermi pinning effect. To improve the performance of GeSn n-FETs, Yen Chuang et al. researched GeSn n-FinFETs and n-Channel MOSFETs: n + –GeSn contact; in situ doped n + –GeSn was grown by CVD, and Ni was employed as the contact metal [83]. With the increasing Sn content and n-type doping level, contact resistivity reduced to 3.8 × 10 −8 Ω/cm 2, which may be attributed to the bandgap shrinkage of GeSn (8% Sn incorporation). With the optimized n + –GeSn contact, the highest drive current and best SS for GeSn n-FinFETs were 108 A/m and 138 mV/dec, respectively (8% Sn incorporation) [85]. To suppress the dopant diffusion for S/D carrier activation, microwave annealing (MWA) was proposed. For GeSn with 4.5% Sn incorporation, GeSn nMOSFETs were found to possess an electron mobility of 440 cm 2/V·s, suggesting that CVD-grown GeSn and MWA technologies are very promising for GeSn CMOS applications. For higher electron mobility, a 0.46% tensile strain was introduced to Ge 0.96 Sn 0.04 ; due to the introducing of tensile strain, the carrier population in the Γ valley was higher. Thus, the electron mobility of GeSn nMOSFETs was further improved to 698 cm 2/V·s [84].