Submitted Successfully!
Thank you for your contribution! You can also upload a video entry related to this topic through the link below:
https://encyclopedia.pub/user/video_add?id=15974
Check Note
2000/2000
Toxicity of Ageratina adenophora on Animals
Edit
Upload a video
This entry is adapted from 10.3390/ijms222111581

Ageratina adenophora is one of the major invasive weeds that causes instability of the ecosystem. Research has reported that A. adenophora produces allelochemicals that inhibit the growth and development of food crops, and also contain some toxic compounds that cause toxicity to animals that consume it.

Ageratina adenophora is one of the widely known invasive weeds that negatively affects the livestock production industry [1][2]. A. adenophora is highly toxic to various animals and affect multiple organs; hence, it has raised serious health concerns in many countries [3][4]. For example, a study reported that the ingestion of A. adenophora caused respiratory disease in horses, characterized by acute edema of the lungs, which led to death [5]. Verma et al. [6] also found that A. adenophora reduced digestive function and photosensitive reaction in cattle. Freeze-dried leaf powder and methanol extract of A. adenophora caused multiple focal parenchymal necrosis and degeneration in the liver of mice [7]. Rats fed with a basal diet containing 25% (w/w) freeze-dried A. adenophora leaf powder showed signs of jaundice, characterized by an elevation of plasma bilirubin, ALP, ALT and AST levels [8]. Furthermore, the toxic effects of A. adenophora ingestion on the liver, spleen and kidney of goat and mice have also been reported, with dose-dependent apoptosis and autophagy and disorders, such as cholestasis, bile duct hyperplasia, liver necrosis, swelling and bleeding in the spleen and kidneys [9][10][11]. In addition, ≥20% dose of A. adenophora increased liver weight, induced severe inflammation, increased reactive oxygen species (ROS) production, and activated pyroptosis [3]. Mice fed with 175 mg/kg A. adenophora extract had decreased antioxidant function by reducing the activities of SOD, CAT, and GSH, while increasing the levels of lipid peroxide (LPO) in the liver [12]. A. adenophora caused a disorder in the arrangement and inhibited the activities of the splenocytes and immune cells in mice [13]. This shows that A. adenophora induces oxidative stress in the liver, thereby damaging it [14].

2. Major Toxins in A. adenophora and Their Toxic Nature

The structure and function of the liver and spleen make them highly susceptible to pathogen and toxin destruction [15].
Numerous sesquiterpenes were identified in A. adenophora of which most have the same molecular skeleton as cadinene. Among these sesquiterpenes, 9-oxo-10, 11-dehydro-agerophorone (euptox A), 2-deoxo-2-(acetyloxy)-9-oxo-ageraphorone (DAOA) and 9-oxo-agerophorone (OA) are the major toxic compounds found in A. adenophora (Figure 1). The main differences between the molecular structure of DAOA and OA is the presence of a 2-acetoxy group in the DAOA and 2-carbonyl group in OA, whereas the distinguishing feature between euptox A and OA is the presence or absence of an unsaturated 6–11 bond in conjugation with a 7-oxo function [16]. These toxins are mainly found in the leaves with a mass percentage of 0.63–1.99 % in dry leaves [17]. 9-Oxo-10, 11-dehydro-agerophorone (euptox A) exhibited hepatotoxicity in rodents [7][18][19][20] with a median lethal dose (LD50) of 1470 mg/kg body weight of mice, whereas 2-deoxo-2-(acetyloxy)-9-oxo-ageraphorone(DAOA) and 9-oxo-agerophorone (OA) also showed hepatotoxicity in mice with respective LD50 of 926 mg/kg BW and 1470 mg/kg BW [16]. DAOA and euptox A are also immunotoxic to mice, showing characteristics such as reduction in numbers and irregular arrangement of splenocytes and thymocytes [13]. Euptox A can cause the arrest of splenocyte proliferation in the G0/G1 phage and induce autophagy in a dose-dependent manner when administered to mice via the gastric route [20]. A. adenophora is dangerous to animals because of its toxic nature; hence, there is the need to develop control strategies and also establish therapeutic measures to attenuate its toxicity once ingested into the body.

Figure 1. Structure of major toxins compounds in A. adenophora.

3. Molecular Mechanism of A. adenophora Toxicity

The exposure of animals to A. adenophora causes an elevation in reactive oxygen species (ROS) parameters, such as nitric oxide, superoxide and hydroxyl radicals, leading to the damage of DNA and proteins in addition to altering the cellular architecture, permeability and cell survival [21][22]. A. adenophora is reported to trigger a series of downstream signaling cascades and further interrupt signaling pathways associated with cell growth, proliferation and apoptosis [3]. The mechanism of ROS formation by A. adenophora is yet to be thoroughly decoded. However, several studies have indicated the involvement of mitochondrial complex I in A. adenophora –mediated oxidative stress in different types of cells. The presence of A. adenophora in cells results in DNA damage, due to its ROS-forming ability through interactions with oxygen [3]. A. adenophora also causes toxicity by reducing the mitochondria membrane potential and through the release of cytosol from the mitochondria membrane [18]. Furthermore, A. adenophora causes an imbalance of apoptosis-related enzymes, Bax and BCl 2, which causes the activation of caspases, thereby resulting in DNA fragmentation and apoptosis.

A. adenophora causes mitochondria dysfunction through the reduction of the cellular antioxidant systems, such as glutathione (GSH), and nicotinamide adenine dinucleotide phosphate (NADPH) levels, which may also disrupt the maintenance of the reduced states of thiol-containing proteins in the mitochondria. This causes the oxidation of the thiol-containing proteins, which in turn, changes the conformation of the mitochondrial membrane permeability transition pore, causing its opening, thereby promoting apoptosis and necrosis [23]. Therefore, at the cellular level, it can be concluded that A. adenophora triggers necrotic cell death, leading to multiple organ failure.

A . adenophora can induce an extensive inflammatory response [24]. Increased levels of ROS are associated with various diseases, such as chronic inflammation [25], and this promotes the release of various pro-inflammatory factors [26]. A. adenophora was reported to cause pyroptosis in the spleen of mice at the dose of 10% and above [14]. Pyroptosis involves the inflammatory response of pro-inflammatory cytokines, such as caspase-1 activation and interleukin-1β (IL-1β) production [27][28][29]. Caspase-1 protease, a major constituent of the multiprotein inflammasome complexes, is involved in the activation and secretion of IL-1β, a pro-inflammatory cytokine [30]. Numerous studies have reported that pyroptosis is an immune effector mechanism that occurs in various types of cells [31][32] and is activated by diverse pathological stimuli [33][34], leading to the secretion of pro-inflammatory cytokines [35]; however, the underlying mechanism for this occurrence requires further studies.

Another current research reported that A. adenophora causes toxicity in the spleen by destroying the fibroblastic reticular cell (FRC) network and causing an imbalance in the Th1–Th2 cell ratio [22]. The study speculated that A. adenophora ingestion induces a persistent inflammatory response in the spleen, which in turn could lead to the activation and promotion of T cell immunity, resulting in splenic dysfunction. However, the mechanism behind these observations is not yet clear. Therefore, it requires further studies. Another study by Cui et al. [36] also reported that A. adenophora causes destruction of the intestinal structure and immune barrier integrity. In summary, A. adenophora induces inflammation in cells, which leads to cell death mediated by pyroptosis. Figure 2 depicts the molecular mechanisms of A. adenophora —induced toxicity in various organs. 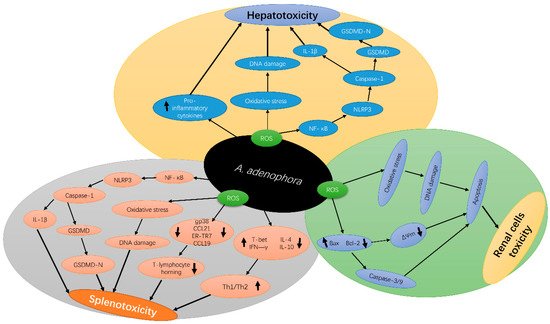 4. Pharmacological Applications of A. adenophora and Potential Therapeutic Interventions against Its Toxicity

Other important pharmacological activities of A. adenophora , such as its anti-pyretic, analgesic and wound healing abilities, were reported recently. Ringmichon and Gopalkrishnan [37] reported that the aqueous extracts at doses of 300 and 400 mg/kg body weight showed a significant decrease in pyretic temperature a few hours after treatment, which was similar to the standard drug (paracetamol; 150 mg/kg body weight). The methanolic extract of A. adenophora leaves showed significant analgesic activity as compared to standard drugs, diclofenac sodium and pentazocine, in an acetic acid–induced writhing test, tail immersion test, and tail-flick test models [38]. Finally, Kumar et al. [39] investigated the wound healing properties of ethanolic extract of A. adenophora formulated as a gel, using the excision and incision wound models. The results showed that the gel could strongly heal the wound in excision with 90.98% wound contraction and 36.16% reduction in epithelialization time, whereas in the incision model, the gel significantly increase (37.86%) the tensile strength on the 13th day of treatment when compared to pure gel control. In a nutshell, A. adenophora produces bioactive compounds that exhibit pharmacological activities and therefore, could be adopted to develop potential drugs or feed supplements to prevent or treat health complications caused by A. adenophora toxicity. Therefore, some potential therapeutic drug candidates (plant extracts, secondary metabolites, and bacteria) from A. adenophora and other sources that could be used to treat or prevent the two major pathogeneses (oxidative stress and inflammation) of A. adenophora toxicity includes the following.

Although many studies have reported on the toxic effects of A. adenophora , other studies have also reported on the plant’s beneficial biological activities, such as its antioxidant, anti-inflammation, anti-microbial, anti-obesity, anticancer and anti-tumor qualities [40][38][41]. These beneficial activities induced by A. adenophora could be attributed to the presence of bioactive compounds in this plant [42]. Oxidative stress is one of the major pathogeneses for A. adenophora toxicity; therefore, the use of antioxidants, especially from natural products, could help eliminate the toxic effects induced by this plant. Numerous bioactive extracts and secondary metabolites in A. adenophora were reported to possess antioxidant properties. For example, ethanolic extract from the leaves of A. adenophora was reported to reduce the generation of hydroxyl radicals [42]. Furthermore, the quinic acid derivative, including 5-O-trans-o-coumaroylquinic acid methyl ester, chlorogenic acid methyl ester, macranthoin F and macranthoin G isolated from the leaves of the plant, showed antioxidant activity against DPPH (1 , 1-diphenyl-2-picrylhydrazyl) radical [43]. Another study that used 2, 2-diphenyl-1-picrylhydrazyl (DPPH) radical scavenging protocol and the ferric reducing ability assay (FRAP) reported that essential oils and cadences extracted from the leaves of A. adenophora showed antioxidant activity similar to the test standards [12]. In addition, oil extracts from A. adenophora showed antioxidant activity, with IC50 values of 8.3 and 4.2 µL, after being tested using the DPPH and β-carotene bleaching methods, respectively [42]. Lastly, methanolic extracts from A. adenophora showed significant DPPH activity as compared to the standard butylated hydroxyl toluene (IC50 for A. adenophora was 92.791, whereas that for butylated hydroxyl toluene was 68.043) [44]. Therefore, harnessing these extracts and secondary metabolites into antioxidant drugs or feed supplements to reduce the ROS damages induced by A. adenophora and other toxins could play an important role in reducing the toxicity of this plant as well utilizing the plant’s resources for the benefit of mankind. However, even though various studies have reported the antioxidant properties of some extracts and secondary metabolites from A. adenophora , there is still the need for effective clinical studies and monitoring to ascertain the safest dose concentration and periods for administration before drug development.

Micro-organisms are indispensable to the nutrition and wellbeing of the host, including humans and animals [47]. Some of these microorganisms have been reported to degrade various toxic compounds in food, soil and the environment. For example, some strains of Pseudomonas , Acinetobacter , Mycobacterium , Haemophilus , Rhodococcus , Paenibacillus , and Ralstonia were reported to encompass the metabolic pathways required for the degradation of many hydrocarbons and mycotoxins [48][49][50]. Similarly, some bacteria were also identified to be able to degrade some major toxins of A. adenophora. Stenotrophmonas spp isolated from A. adenophora could degrade euptox A, thus making A. adenophora safe to feed livestock [51]. Furthermore, a more recent study reported that tannase-producing rumen bacteria, Klebsiella variicola strain PLP G-17 LC, Klebsiella variicola strain PLP S-18 and Klebsiella pneumonia strain PLP G-17 SC could also degrade euptox A. These findings suggest that using the above microbial strains as microbial feed supplements could enhance the utilization of A. adenophora to alleviate the toxicity caused by euptox A ( A. adenophora ). Therefore, there is a need for further studies to isolate more such beneficial bacteria to help degrade the other main toxins (such as 2-deoxo-2-(acetyloxy)-9-oxo-ageraphorone and 9-oxo-agerophorone) in the plant. These bacteria and fungi could be developed into probiotics or other feed supplements that would be administered to animals that are highly exposed to A. adenophora and other noxious plants to prevent or reduce their toxicity. However, to achieve this, there is the need to investigate the efficacy and safety of these microbial strains through standardized experimental animal feeding trials.