Submitted Successfully!
Thank you for your contribution! You can also upload a video entry related to this topic through the link below:
https://encyclopedia.pub/user/video_add?id=15943
Check Note
2000/2000
Equol
Edit
Upload a video
This entry is adapted from 10.3390/nu11092231

Equol, produced from daidzein, is the isoflavone-derived metabolite with the greatest estrogenic and antioxidant activity. Consequently, equol has been endorsed as having many beneficial effects on human health. The conversion of daidzein into equol takes place in the intestine via the action of reductase enzymes belonging to minority members of the gut microbiota.

Abundant epidemiological evidence suggests that diets rich in phytoestrogen-containing foods, such as soy and soy products, reduce the risk of a number of syndromes and chronic diseases, notably menopause symptoms in women, cardiovascular and neurodegenerative diseases, and certain types of cancer [1][2][3]. Isoflavones are non-nutritive phenolic compounds found in the roots and seeds of many plants, of these, soybeans are the richest source [4]. Soy isoflavones are phytoestrogens resembling 17-β-estradiol; although less active than the hormone, they show estrogen-like activity [5]. Extracted from soy or other sources, isoflavones can be administered as food supplements.
In plants, isoflavones are found mostly (>80%) in the form of glycoconjugates, i.e., the glucosides genistin, daidzin, and glycitin, and the corresponding acetyl and malonyl derivatives [6]. Glycosides are not readily absorbed in the gut and have only low-level estrogenic activity [7]. For isoflavones to become bioavailable and functional, these glycosides must be hydrolyzed into their corresponding isoflavone-aglycones, i.e., genistein, daidzein, and glycitein [8].
The amount of aglycones in plasma cannot be predicted from soy or isoflavone ingestion, as many intrinsic (genetic background, gut microbiota, bowel disease, age, sex, etc.) and extrinsic (isoflavone source, method of extraction, formulation, etc.) factors influence their bioavailability [9]. The plasma isoflavone concentration in humans is only 0.5–1.3% of that actually absorbed, much lower than in animal models (0.5–3.1% for rats and 3.1–26.0% in mice) [10]. Results obtained in animal studies may not, therefore, be easily extrapolated to humans. Absorbed aglycones are metabolized mainly to glucuronidated and sulphated derivatives by endogenous phase I and phase II enzymes [9][11]. They may then be further catabolized in the liver or secreted into the bile, thus returning to the intestine via the enterohepatic circulation [12].
Certain aglycone conjugates may have estrogenic activity too, and serve as an intracellular reservoir for the release of free aglycones in target cells [13]. However, as for absorption, extrapolation of plasma concentrations to the tissue level may not be valid. Indeed, the identification and quantification of the isoflavone derivatives in target tissues has rarely been determined [14]. In humans, equol concentrations have been reported to range between 22–36 and 456–559 nmol/kg in breast adipose and glandular tissue respectively [15][16].
Unabsorbed isoflavones and those excreted by the biliary system to the intestine reach the colon where they are deconjugated by bacterial enzymes and then (re)absorbed or further metabolized [12][17]. In the gut, isoflavone aglycones can be metabolized by intestinal microbes via several reactions, including reduction, methylation/demethylation, hydroxylation/dihydroxylation, and C-ring cleavage (Figure 1). 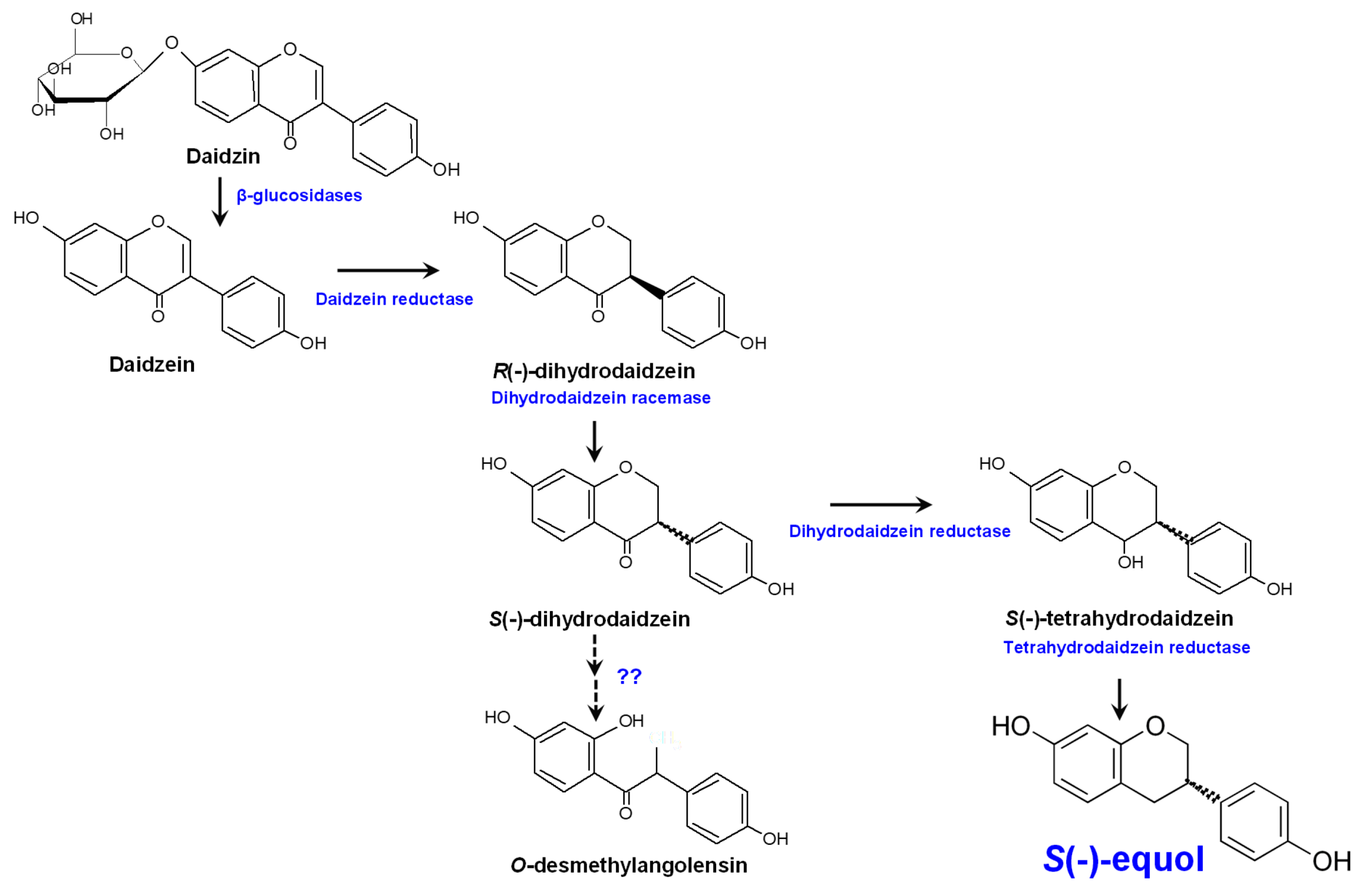 Figure 1. Metabolism of the isoflavone glucoside daidzein by the human gut microbiota and equol biosynthesis pathway.

Extracted from the urine of pregnant mares back in 1932, equol [C15H12O(OH)2] was the first isoflavonoid to be identified [18]. Later, in 1982 it was the first isoflavone-derived compound detected in human urine and blood (reviewed by Setchell and Clerici [19]). Equol is an isoflavone-derived metabolite formed from daidzin/daidzein by bacteria in the distal region of the small intestine and colon [19]. From a chemical viewpoint, equol (4’,7-isoflavandiol) is an isoflavane phenolic compound with a non-planar structure, which might be responsible for its physiological activities [20]. Equol is optically active with an asymmetric carbon atom at the C3 position giving rise to R(-)- and S(-)-equol enantiomers. However, only S(-)-equol has been detected as a result of bacterial daidzein conversion [21][22][23]. Equol is more stable, more easily absorbed, and has a lower clearance than its precursor molecule daidzein [24]. It also shows stronger estrogenic activity than any other isoflavone or isoflavone-derived metabolite [23][25]. As for other isoflavones, equol also shows anti-androgenic activity by binding to and sequestering 5α-dihydrotestosterone [26]. In addition, it is the isoflavone-derived compound with the strongest antioxidant activity [27][28]; antioxidants are thought to have a prominent role in the onset and progress of different chronic diseases, including cancer [29].

In East Asian countries, climacteric vasomotor symptoms during menopause in women are less severe than in Western women and the incidence of cardiovascular disease, osteoporosis, mental disorders, and certain types of cancer is about two- to four-fold of that seen in the West [1][2][3][30][31][32]. Alongside genetic factors, this large difference is assumed to have a nutritional basis. Isoflavones are an important component of Asian diets (15–50 mg day versus <2 mg in Western countries) [33][34][35][36], and observational and epidemiological studies have correlated a high intake of soy and isoflavones with reduced menopause symptoms, increased bone formation, reduced bone resorption, improved learning, and a reduced risk of prostate, colon, and breast cancer [37][38][39][40].
In vitro laboratory studies and animal interventions can predict the impact of isoflavones on human health, but only human trials can provide proof. However, most current human interventions involving isoflavones have suffered from small sample sizes, short trial durations, lack of appropriate controls, the use of isoflavones from various sources, supplements with different aglycone contents, and other methodological flaws [41]. Not surprisingly, this has led to inconsistent results being reported [31][42][43][44][45][46]. Indeed, most reviews and meta-analyses report the results of soy and isoflavone intervention studies to be far from conclusive [1][47][48][49][50][51][52]. As a result, regulatory agencies usually conclude there to be no scientifically sound evidence of isoflavones reducing the risks and symptoms of any disease [14][41][53]. In addition to the effect of genetic variation on the phenotypic expression of human disease [54][55], interpersonal differences in the intestinal microbiota may also account (at least in part) for the discrepancies seen [56][57]. Such differences could give rise to different microbial isoflavone-derived metabolites being produced [12][58], which might explain the lack of effectiveness in some studies. In particular, there has been much speculation regarding the reason why just a fraction (25 to 50%) of the human population produces equol. Conceivably, these subjects might be the only ones who would benefit from soy or isoflavone consumption [46][59][60]. To test this hypothesis, the categorization of the individuals in isoflavone trials by their equol-producing phenotype is pivotal. This only began in recent years [61][31][60][62][63] and no firm conclusions have yet been drawn. Indeed, the results of many studies have been very conflicting [43][44][45][46][64][65][66][67].
In contrast to their possible health benefits, the anti-estrogenic properties of isoflavones might also cause them to act as unwanted endocrine disruptors [68]. In vitro and animal studies both report isoflavones able to interfere with different checkpoints of the hypothalamic/pituitary/thyroid system [69]. This could have a huge repercussion on thyroid homeostasis. Further, the estrogenic activity of isoflavones (and thus equol) could pose a potential hazard by promoting certain types of tumor [70]. However, the scientific evidence supporting their having any harmful consequences is also inconclusive [14][41].

4. Mechanistic Mode of Action of Equol

The mechanistic mode of action of equol is not yet completely understood. Studies have mostly been done through in vitro assays using concentrations higher than those found under physiological conditions, thus limiting the provision of robust and definitive conclusions. Further, equol is found in plasma mainly as a 7-O-glucuronide derivative [71], which makes it difficult to discern the biologically-active form(s) at tissue and cellular levels. In spite of these deficits, evidence from experimental studies suggests that equol may act in multiple ways [72]. Based on its structural similarity to 17-β-estradiol, equol binds to both estrogen receptors (ERs) α (ERα) and β (ERβ—the preferred target) with greater affinity than its precursor daidzein, and to a degree comparable to that of genistein [73][74]. As ERs are not equally distributed among the different tissues, equol might have different effects depending on the ratio of ERα and ERβ isoforms present. Whether it acts as an agonist or an antagonist may further depend on the level of endogenous estrogens present, as they bind to both receptors more tightly [75]. The antioxidant activity of equol seems to be mostly mediated by its interaction with the ERβ [27], which induces the extracellular signal-regulated protein kinases (ERK1/2) and the NF-κB peptide, factors that control transcription, cytokine production, and cell survival [76]. Isoflavones and equol may not act as antioxidants themselves but rather by triggering cell signaling pathways leading to changes in the expression of cellular enzymes such as superoxide dismutase, catalase, and glutathione peroxidase (all involved in counteracting oxidative stress) [29]. Mechanistically, equol’s influence on transcription seems to proceed through the activation of the transactivation function AF-1 [77]. Another mode of action of equol underlying several physiological effects may relate to epigenetic mechanisms, including DNA methylation, histone modification, and microRNA regulation [78].
Equol has been reported to induce acute endothelium- and nitric oxide (NO)-dependent relaxation of the aortic rings, and is a potent activator of the human and mouse pregnane X receptor (PXR), a steroid and xenobiotic sensing protein in the nucleus [79]. Further, it has been proposed that it modulates endothelial redox signaling and NO release, involving the transactivation of the epidermal growth factor receptor kinase (EGFRK) and the reorganization of the F-actin cytoskeleton [80]. Equol has also been shown to prevent (at physiological concentrations) oxidized LDL-stimulated apoptosis in human umbilical vein endothelial cells [81], and to reduce the oxidative stress induced by lipopolysaccharides in chicken macrophages [82]. These activities may provide the basis for therapeutic strategies, for instance by restoring endothelial function in cardiovascular diseases. An improvement in atherosclerosis has also been reported via equol attenuating ER stress, mediated by the activation of the NF-E2 p45-related factor 2 (Nrf2) signaling pathway [83]. The cancer-protective effects of isoflavones and equol have been attributed to a variety of signaling pathways, including the regulation of the cell cycle (by reducing the activity of the cyclin B/CDK complex) [84], the inhibition of cell proliferation (by, for instance, reducing activity of topoisomerase II) [85], the induction of apoptosis [76][86][87], and the degradation of androgen receptor by S-phase kinase-associated protein 2 (PKAP2) [88]. The anti-prostate cancer activity of equol in cell cultures has been proposed associated with activation of FOXO3a (one of the forkhead-family factors of transcription involved in apoptosis) via protein kinase B (Akt)-specific signaling transduction pathway, and with the inhibition of the expression of the MDM2 complex (a negative regulator of tumor suppressor p53) [89][90], plus the inhibition of the degradation of the androgen receptor [88]. Diabetes and other metabolic disorders may be influenced by equol via its preventing glucagon-like peptide 1 (GLP-1) secretion from the GLUTag cells [91]. The modulation of glucose-induced insulin secretion and the suppression of glucagon release (from the α- and β-pancreatic cells, respectively) by GLP-1 in response to the ingestion of nutrients have been firmly established [92]. Equol can also prevent hypoglycemia by activating cAMP signaling at the plasma membrane of INS-1 pancreatic β-cells [93]. Finally, it has been reported to significantly increase the expression of genes coding for collagen, elastin, and tissue inhibitor of metalloproteases, while reducing the expression of metalloproteinases [94]. All these factors contribute towards an improvement of the skin’s antioxidant status, delaying aging. However, despite of all the knowledge gathered by these in vitro observations, the effects of equol on human health in vivo, and their magnitude, are yet to be confirmed.

More
© Text is available under the terms and conditions of the Creative Commons Attribution (CC BY) license (http://creativecommons.org/licenses/by/4.0/)
Upload a video for this entry
Information
Subjects: Nutrition & Dietetics
Contributor MDPI registered users' name will be linked to their SciProfiles pages. To register with us, please refer to https://encyclopedia.pub/register :
Baltasar Mayo
View Times: 99
Revisions: 2 times (View History)
Update Time: 15 Nov 2021
Table of Contents
1000/1000
Hot Most Recent