Submitted Successfully!
Thank you for your contribution! You can also upload a video entry related to this topic through the link below:
https://encyclopedia.pub/user/video_add?id=15840
Check Note
2000/2000
Socioeconomic and Environmental Impacts of High-Speed Rail
Edit
Upload a video
This entry is adapted from 10.3390/su132112231

Countries considering high-speed rail (HSR) developments face enormous challenges because of their high deployment cost, environmental obstacles, political opposition, and their potentially adverse effects on society. Nevertheless, HSR services are importantly sustainable that can have positive and transformative effects on the economic growth of a nation.

High-speed rail (HSR) is categorized as a transport mode that uses a combination of specialized rolling stock and dedicated tracks to transfer passengers between origins and destinations. HSR runs significantly faster and smoother than traditional trains. The first HSR systems appeared in Tokyo, Japan in 1964, known as bullet trains that connected cities with the aim of travel time savings and the mitigation of capacity constraints on existing railways. France was the next country to make high-speed rail available to the public in 1981—the system connected Paris and Lyon with speeds up to 124 mph. Today, the French high-speed rail network grew to more than 2800 km with the Lignes à Grande Vitesse (LGV) allowing speeds of up to 200 mph [1].
Some of the acknowledged benefits of HSR are shorter travel time across long distances, lower transportation costs, reduced fuel consumption, lower highway, and air traffic congestion, rising land values, and economic development in large and small communities [2]. According to a study by Chinese and U.S. economists, extending bullet trains can increase the value of the real estate, improve the quality of life, reduce air pollution, reduce traffic congestion, and provide more travel options for crowded cities, especially in the developing world [3]. The Chinese study is based on the nation’s high-speed rail network, but the researcher’s project is that the benefits experienced there would be the same for California’s proposed HSR system. A study coordinated by Tsinghua University and the University of California found that bullet train systems connecting China’s largest cities to nearby smaller cities have made those cities more attractive for workers, alleviated traffic congestion, and reduced pollution in megacities [4].
The deployment of HSR in the United States will provide Americans with more transportation choices. However, HSR deployment is one of the most expensive and politically charged undertakings of any nation. Therefore, decision-makers would benefit from an updated and comprehensive review of HSR deployment impacts. The most recent review of HSR deployments around the world is more than a decade old [5]. In that review, the authors focused on the various development and operating cost models of HSR deployments through 2006. There were later studies about HSR impacts on society, but they focused only on local regions. For example, a recent study of bullet train systems in China found they reduced traffic congestion, decreased air pollution, attracted workers to smaller connecting cities, and increased the value of nearby real estate [3][4]. Even with so many external benefits, the United States has only recently approved HSR developments in a few large cities [6].

The first high-speed rail system, known as the bullet train, was created in 1964 to link the Japanese cities of Tokyo and Osaka. China has the longest length of HSR in the world with 26,869 km; by comparison, the United Kingdom has about 1377 km of rail [7]. In 2009, there were more than 12,158 km of HSR in the world, which increased to more than 78,850 by 2018. Italy [8] the United Kingdom [9] and France [1] were the next countries to make HSR available to the public. In 1981, the French system connected Paris and Lyon with speeds up to 200 km/h. Today, the French high-speed rail network has expanded to more than 3220 km of rail networks that allow for speeds of up to 320 km/h. Germany’s development lasted nearly two decades [10] whereas the other developments were complete within 10 years. HSR in China has developed rapidly over the past 15 years because of generous funding from their government [11]. In the early 1990s, China started planning the current HSR network as well as the country of Norway [12], modeling it after the Shinkansen system in Japan. Korea began construction shortly after China [13].

Table 1 summarizes the length of a line in operation, under construction, and not started construction [14]. Table 1 is ordered from the largest network to the smallest. Table 1 also includes the year of construction start to the commencement of operations for the first HSR deployment in that country. The last column of Table 1 lists the number of years taken to develop and deploy the first HSR system in each country. The average time is 7.48 years, and the standard deviation is 4.82 years. The average development time for countries in the Asian continent was 8.83 years as compared with 8.25 years for European countries.

Figure 1 revealed that HSR impacts of the highest and the lowest interest were economic development and health, respectively. Articles directed at policymaking ranked next to last even though most of the journals in which articles appeared dealt with policy implications. The pattern in Figure 2 shows that studies about HSR impacts on economic development, the environment, and land use were consistent over the years. Topics in innovation emerged after 2014. The pattern in Figure 3 highlights those studies about the impact of HSR on the economic development of China and Spain dominated. 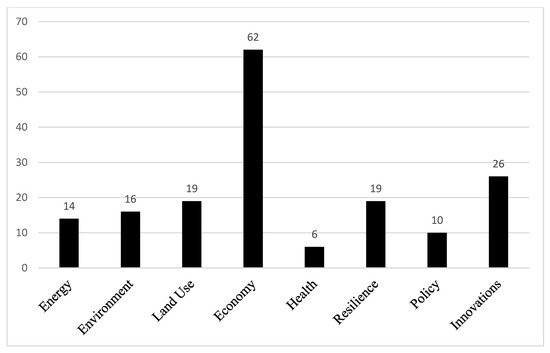 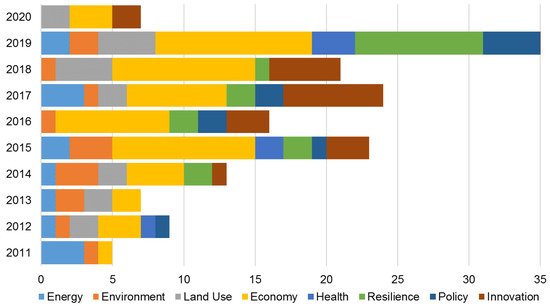 Figure 2. Distribution of articles by year and impact area.

Figure 3. Distribution of articles by impact area and location.

Although extremely expensive to deploy, operate, and maintain, high-speed rail (HSR) positively benefits society. This work revealed that the effects of space-time compression through faster travel provided several economic benefits. Such benefits included lower fuel consumption, job creation, tourism growth, congestion reduction, and enhancements of real estate value along service routes. However, there were also adverse impacts on the environment such as increased pollution, community severance, and risks to biodiversity.
The patterns of article appearance and subject matter covered indicated that interest in the societal effects of HSR sustained an exponential growth since 2011. The exponential growth appeared after the second wave of HSR deployments across Europe. The coverage of HSR deployments in China, Spain, and Italy was dominant. Those countries also had the most extensive HSR infrastructure. The focus of articles on economic, environmental, and land-use impacts remained consistent across time. The articles mostly have positive sentiments about impacts on society. Techniques known for their statistical rigor, such as DID method and Regression analysis, dominated all cross-sections of time, location, impact area, and sentiments assessed.
The authors used all methods except benefit-cost analysis (BCA) and sentiment analysis to analyze deployments in China. Conversely, those methods were used more extensively to analyze deployments in the United States and Europe, suggesting that there were regional differences in influence. These findings suggest that cultural, social, and political differences may influence decisions about HSR deployments in a variety of ways. Therefore, future research will examine how such differences may have influenced HSR deployments in Western, Eastern, and European countries. Factors will include environmental laws, labor laws, land ownership, terrain, and influences by political lobbying from competing modalities such as aviation and trucking.

More
© Text is available under the terms and conditions of the Creative Commons Attribution (CC BY) license (http://creativecommons.org/licenses/by/4.0/)
Upload a video for this entry
Information
Subjects: Urban Studies
Contributor MDPI registered users' name will be linked to their SciProfiles pages. To register with us, please refer to https://encyclopedia.pub/register :
Mohsen Momenitabar
View Times: 48
Revisions: 2 times (View History)
Update Time: 22 Nov 2021
Table of Contents
1000/1000
Hot Most Recent