Submitted Successfully!
Thank you for your contribution! You can also upload a video entry related to this topic through the link below:
https://encyclopedia.pub/user/video_add?id=15824
Check Note
2000/2000
Bone Regeneration Using MMP-Cleavable Peptides-Based Hydrogels
Edit
This entry is adapted from 10.3390/gels7040199

Autogenous bone was identified as the gold standard for bone defects and retained perfect biocompatibility, but it could not fully satisfy the requirements due to low yield, iatrogenic injury and risk [1]. Other solutions such as allografts, xenografts and bone substitute materials hold corresponding shortcomings in terms of, for example, immune response, infectious risk and disease transmission [2][3]. Therefore, a further sustainable and high-yielding strategy is required, which leads us to tissue engineering methods. Numerous studies have recently introduced bioactive scaffolds and their interaction with adjacent bony tissues, and hydrogels have received attention due to their excellent biocompatibility, biodegradability and plasticity [4][5][6].

With their hydrophilic polymeric networks, hydrogels are considered the most promising polymer scaffold in bone tissue engineering [7], and the modification of their permeability and stiffness enables substance exchanges and cell function [8][9]. As the basis and guiding principle of bone regeneration, the degradation behavior of hydrogels is directly related to the speed and quality of bone repair [10]. Specifically, hydrogels in bone regeneration should be constructed by biocompatible materials and hold enough stability for cell activity at an early stage [11][12]. Along with cell growth and microstructural remodeling, biodegradation of hydrogels is required to create appropriate space for the incoming inhabitants. Despite the natural and synthetic polymers used in their preparation, the degradation solution of hydrogels mainly takes into account temperature, pH, light irradiation, ultrasound and enzymes, among other aspects. [13][14][15]. Among them, enzymatically responsive hydrogels are well-recognized at present for their controlled and tunable degradation adapted to in vivo circumstances [16][17].

Response and adaption under environmental variation are intrinsic properties of all biosystems, as well as biomaterials [18]. The transformation of spatial configurations, physical properties or structural stability under proper stimulation helps in the degradation of bone fillers and the release of bioactive cargoes. Enzymes were valued as a promising trigger for novel responsive polymers, considering their biological origin, efficiency and high selectivity [19]. Leading-edge research reported that clustered regularly interspaced short palindromic repeats (CRISPR)-associated enzymes could be utilized to cleave DNA cargoes in responsive hydrogels and for the delivery of genetic information [20]. Remarkably, enzyme levels vary with in vivo microenvironments and biological behaviors, and this variation was used in a novel strategy that integrates enzymatic reaction and controlled release [21]. For instance, a smart hydrogel constructed by glutathione-modified collagen and MMP-cleavable peptide targeted myocardial infarction and ameliorating myocardium remodeling in vivo in a “release on-demand” manner [22]. Particularly, it was revealed that MMPs are involved in bone remolding. Thus, the MMP-cleavable peptides-based hydrogels are promising candidates for bone tissue engineering.

Poly (ethylene glycol) (PEG) is a hydrophilic polymer that has the characteristics of biocompatibility and bioinertia, and it can support cell growth after the addition of the appropriate protease-sensitive connectors and cell adhesion sites [23]. Therefore, PEG hydrogel is a promising synthetic hydrogel. PEG hydrogels have interconnected microporous networks that provide continuous nutrient flow, cell growth and vascularization of engineering tissue ( Figure 1 ). Studies showed that PEG hydrogel helps to maintain the phenotype of natural heart valve cells [24], optimize cell viability and morphology [25], and promote the production of extracellular matrix [26]. Dai et al. prepared a kind of stromal cell-derived factor-1-α-loaded MMP degradable PEG hydrogel [27]. The experimental data show that the hydrogel has good biocompatibility, can promote the recruitment of mesenchymal stem cells, can promote the phenotypic polarization of M2 macrophages, and has good tissue remodeling ability. The hydrogel can also improve the adhesion, activity and proliferation of bone marrow mesenchymal stem cells (BMSCs) and promote the differentiation of BMSCs into valvular interstitial-like cells.

In addition, PEG hydrogels can be modified to meet the needs of specific applications in vitro and in vivo [5][28][29][30][31]. Metzger et al. cross-linked Streptavidin with PEG to prepare hydrogel, which can release immobilized growth factor (GF) and does not depend on the degradation of hydrogel [32]. Research data show that through the appropriate design of the release system, GF can be released by PEG hydrogels in a soluble form that is more effective than the supplementary cell culture medium for local delivery.

Moreover, PEG hydrogel is widely used in cell delivery and bone tissue engineering [33]. Sridhar et al. developed a peptide- and protein-functionalized PEG hydrogel. After being co-cultured with the hydrogel for 14 days, chondrocytes significantly increased the deposition of glycosaminoglycans and collagen, maintained a high level of activity, and produced a more widely distributed matrix. This shows that hydrogel can promote the production of cartilage matrix [34].

It was reported that PEG hydrogel can be used as a blank skeleton, in which multiple scaffolds with various functions can be systematically introduced into the scaffold to allow integrin binding [35], proteolysis and degradation [36][23], and even local isolation of growth factors [37]. Therefore, PEG hydrogels with specific material compositions can be used to guide mesenchymal stem cells to differentiate into specific types of chondrocytes [38]. Nguyen et al. designed and synthesized a three-layer composite hydrogel, based on PEG, that was doped with chondroitin sulfate, metalloproteinase-sensitive peptides and HA [39]. The results show that the hydrogel can not only induce MSCs to differentiate into chondrocytes, but also customize the phenotype and matrix production pattern of differentiated cells according to the specific region of articular cartilage by changing the material composition.

The thiol groups of cysteine usually act as a crosslinker in MMP-cleavable peptides. Although some MMP-cleavable peptides could be crosslinked with polymers by introducing chemical groups via the grafting of amino acids to peptides, tt is easier to introduce some functional groups into the polymers to construct hydrogels with the amino acid sequences. Several common methods of polymer modification are discussed below.

Norbornene (NB) groups, which are also molecule linkers, have attracted increasing attention because their photo-crosslink property and have been widely introduced into biomaterials for use as a bioink in bioprinting [40][41][42]. It is well-known that the photochemical reaction of the NB group holds a speedy reaction rate under physiological pH and temperature, and that the reactions could occur at relatively low radical concentrations [43]. These advantages demonstrate that introducing the NB group into biomaterials might be a promising solution in biomedicine and tissue engineering. Gelatin is a natural polymer, which exhibits cell-interactive properties, and could be easily modified due to its diverse chemical groups, including -OH, -COOH and -NH2. Therefore, gelatin could employ an NB group using 5-norbornene-2-carboxylic acid in the reaction of the carboxylic acid and the primary amines [43]. The norbornene derivant could also be utilized in NB group insertion; Guo et al. synthesized norbornene-collagen that was obtained from acidic collagen after reacting with carbic anhydride [44].

In addition, PEG, which is identified as one of the most common synthesis polymers, also combines with the NB group under the appropriate circumstances. Eight-arm PEG-hydroxyl, dissolved in dichloromethane (DCM) with pyridine and 4-Dimethylaminopyridine (DMAP), could introduce NB groups via an overnight reaction with 5-norbornene-2-carboxylic acid and N,N’-dicyclohexylcarbodiimide under nitrogen conditions [45]. The hydrogel could be formed with MMP-cleavable peptides under ultraviolet light (UV) with lithium phenyl-2,4,6-trimethylbenzoylphosphinate (LAP) and elevated alkaline phosphatase (ALP) activity. As a result, it could be developed as a prospective biomaterial for bone regeneration.

The click chemistry reaction is inspired by nature and boasts mild reaction conditions, and also has high specificity, rich yielding and a speedy reaction rate [46][47]. In particular, it is biorthogonal and widely used in cell therapy with few side reactions [48]. Cysteine is commonly grafted into peptides since its thiol group and alkenes groups are rarely found in nature. Such peptides are extensively used to crosslink the polymers possessed alkene groups (typically the norbornene groups) to form hydrogels via the thiol-ene photo-click chemistry reaction between the thiol group and the alkene groups with cytocompatible light initiation. The reaction, which is mediated by light, starts with radical initiation upon irradiation to form a thiyl radical [49]. Furthermore, the hydrogels are polymerized in a step-growth manner. As a result, the hydrogels exhibit a spatiotemporally controlled gelation behavior and excellent cell encapsulation ability [50]. MMP-sensitive PEG-based hydrogels were identified, and they were found to be formed via the click reaction between 4-arm PEG-modified with norbornene groups and MMP-cleavable crosslinker (KCGPQG↓IWGQCK) [34]. Cells and growth factors were co-encapsulated into the hydrogel and functioned well based on the biocompatibility of this polymer ( Figure 2 ). 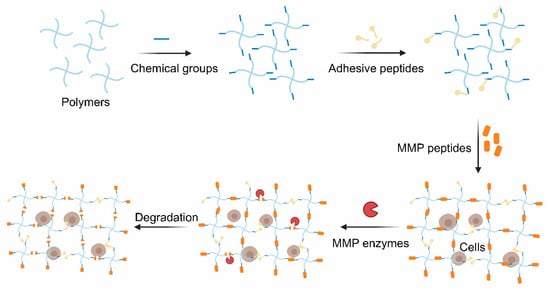 More
© Text is available under the terms and conditions of the Creative Commons Attribution (CC BY) license (http://creativecommons.org/licenses/by/4.0/)
Upload a video for this entry
Information
Subjects: Cell & Tissue Engineering
Contributor MDPI registered users' name will be linked to their SciProfiles pages. To register with us, please refer to https://encyclopedia.pub/register :
Qin Zhang
View Times: 53
Revisions: 2 times (View History)
Update Time: 10 Nov 2021
Table of Contents
1000/1000
Hot Most Recent