Submitted Successfully!
Thank you for your contribution! You can also upload a video entry related to this topic through the link below:
https://encyclopedia.pub/user/video_add?id=15792
Check Note
2000/2000
Biomarkers of Pigs' Emotional Valence
Edit
Upload a video
This entry is adapted from 10.3390/ani11072054

It is widely recognized that the assessment of animal welfare should include measures of positive emotional (affective) state. Existing behavioral and physiological indicators of a positive affective state frequently lack sensitivity, objectivity or are unsuitable in a production environment. Therefore, there is a need to develop new approaches to accurately and objectively measure a positive emotional state in animals, including novel molecular markers such a miRNA. These biomarkers must be measurable in the peripheral circulation and provide an accurate account of the physiological and molecular activity in regions of the brain associated with emotional processing. Further, such markers require validation against established behavioral and physiological indices. Here we investigated the efficacy of circulating miRNA as biomarkers of emotional state in the pig.

The assessment of emotional or affective state in animals can be challenging, particularly the assessment of positive emotion since there are fewer identified behaviors or biomarkers specific to these states. Emotions have been operationally defined as “specific, intense and short-lived responses to stimuli” whilst mood refers to “longer, more ambiguous, and nonattributable affective feelings of lower intensity” [1][2], both of which can vary along two main axes, including arousal, or strength of response, and valence (direction of response, being positive or negative) [3]. Emotions are recognized as complex, multifaceted phenomena, that give rise to rapid physiological and behavioral changes which likely evolved to achieve goals related to survival, such as attainment of valuable resources/rewards and avoidance of harm/punishment [4]. Animal welfare encompasses a long-lasting state comprising the summed-up experiences of the individual [5] and can be defined in terms of affective states and their relative weighting over time [6]. Therefore, the assessment of animal welfare should include measures of animal emotion [7]. However, in order to study animal emotional state, it is first imperative to identify methods that accurately and objectively measures the emotional state of animals.
A number of physiological and behavioral indices are currently used to infer the emotional state of animals. For example, physiological indices including hypothalomo–pituitary–adrenal axis (HPA) activity, sympathetic and autonomic functioning, endocrine function, as well as behavioral parameters have been used as makers of emotional state in animals. However, although these measures can indicate emotional arousal, they are often unable to distinguish between the valence or direction of the emotion being elicited. Furthermore, these measures tend to relate to negative affect, with less focus on, and development of, indicators of positive emotional state [8]. One assessment tool recently shown to have value in this respect is the judgment bias test (JBT), which use an animal’s behavioral response as an indicator of its underlying affective state in response to an unknown stimulus. [9]. Animals first learn to discriminate between a positive stimulus, such as a high value reward, and an aversive or nonrewarding stimulus, such as no reward or punishment [10]. Once animals have learnt to discriminate between positive and aversive stimuli, they are then tested on an ambiguous stimulus, intermediate between the two learned stimuli. These tests are based on the assumption that if, under ambiguity, the animal behaves in a manner normally associated with a positive reward, that animal has an enhanced expectation of a positive outcome that, thus, implies a positive emotional state [11]. Conversely, if the animal displays behaviors consistent with an aversive outcome, that animal has reduced anticipation of a positive outcome, which implies the animal is in a negative affective state [11]. The JBP has been used successfully in a variety of species including rats [12], sheep [13], dogs [14], chickens [15], and pigs [16][17][18], but while JBPs are considered to have good validity [19], they are less suited to production environments due to the time it takes to train animals to perform the test [20]. There is therefore an urgent need to identify and validate objective physiological or molecular markers of positive affect [21][22], in order to complement or even replace existing behavioral and physiological measures [23][24]. Following validation, new technologies may be able to be developed to analyze these biomarkers rapidly on farm using relatively noninvasive sampling, thus making them applicable for production environments (i.e., sensor-based technologies in blood or saliva).
MiRNA are small, noncoding RNA molecules involved in the regulation of genes post-transcriptionally. These molecules are ubiquitous throughout the body, including the brain, and are involved in the regulation of genes, including those associated with emotional processing [22]. For example, dysregulations of specific miRNAs have been used as diagnostic tools for a number of psychological conditions including anxiety [25][26], major depressive disorder (MDD) [27], post-traumatic stress disorder (PTSD) [28], bipolar disorder [29], and schizophrenia [30]. These molecules are involved in the regulation of emotional processes, and are released into the circulation, enabling measurement in the blood, urine or saliva [31][32]. As a result, they have the potential to be biomarkers of the activity associated with emotional processing, including those neuronal systems involved in the regulation of positive emotions such as the serotonergic and dopaminergic reward pathways [22][33][34]. For example, miRNA-16 has recently been implicated in the modulation of serotonergic transmission in the mouse brain [35]. In another mouse study, specific miRNAs, including miRNA-212, were shown to regulate the motivational properties of drug addiction within the prefrontal cortex (PFC) and striatum following the self-administration of addictive drugs [36]. Nevertheless, most miRNA research conducted in humans and rodents has focused on negative physiological or disease related conditions [37], including neuropathic pain or psychological conditions that can impact emotional state. Few studies have investigated miRNA with the specific intention to identify miRNA as correlates of positive emotional state, and to our knowledge no such studies have been conducted in pigs.
To identify and validate novel measures of positive emotion in the pig, including molecular markers such as miRNA, requires an accurate assessment of different affective states in the animal as well as the implementation of a robust means to manipulate affective state in a controlled experimental setting. Husbandry practices are known to influence production outcomes and impact welfare parameters. For example, increased floor space was shown to produce healthier pigs with high immunity and increased comfort and play behavior [38]. Pigs that are socially isolated from pen mates have shown increased behaviors indicative of stress and a decrease in behaviors indicative of positive welfare such as play [39]. The provision of enrichment to animals in farmed systems is suggested to improve biological functioning, as well as increase overall wellbeing, as it allows the animal to perform rewarding and motivated species-specific behaviors [40][41]. Furthermore, the provision of enrichment to pigs has been shown to induce a positive judgment bias compared to animals housed in barren systems, suggesting pigs provided enrichment were in a more positive emotional state [16].

2.1. Identification of Positive and Aversive Cue 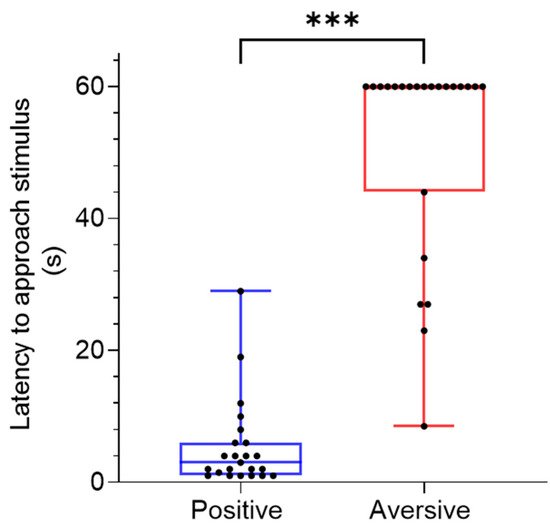 Figure 2. Latency to approach (s) positive and aversive stimulus at week ten of training in pigs (n = 23). Data are medians with range. Significant difference is indicated with presence of asterisk (p < 0.05).

2.2. Cue Location and Latency to Approach 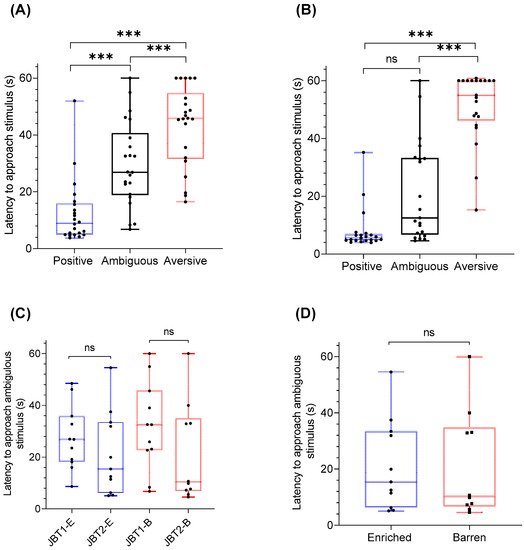 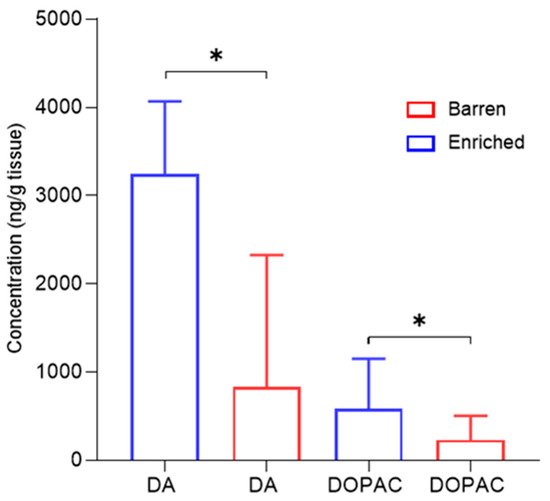 Figure 4. Concentration (ng/g tissue) of dopamine (DA), and its metabolite (DOPAC), in the striatum of pigs exposed to either enriched (n = 6) or barren (n = 6) housing treatments. Data are median ± range. Significant differences are indicated by presence of asterisks (p < 0.05).