Submitted Successfully!
Thank you for your contribution! You can also upload a video entry related to this topic through the link below:
https://encyclopedia.pub/user/video_add?id=15604
Check Note
2000/2000
The Association of Gut Microbiota in Gastrointestinal-Cancer Therapies
Edit
Upload a video
This entry is adapted from 10.3390/biomedicines9101305

In gastric cancer, different tumour entities have different compositions of the gastric microbiome [1]. In colorectal carcinoma, there are microbiome changes compared to healthy individuals. In particular, Proteobacteria and Actinobacteria occur more frequently in patients with colorectal carcinoma [2]. In the following sections, we give an overview of the complications and corresponding microbiome for specific therapeutic options. Furthermore, in Figure 1 the key findings are summarized for a better overview. 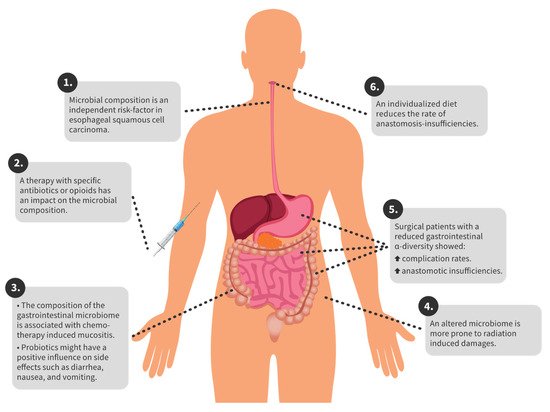 Several studies showed that the microbiome is directly altered after surgery [3][4][5]. In abdominal surgery, anastomotic insufficiencies and abdominal infections are feared complications that often lead to life-threatening sepsis. The most common complications after colectomy in colorectal-cancer patients are anastomotic leakages (8.4%) and wound infection (13.4%) [6]. Patients with a colorectal carcinoma that showed reduced alpha diversity and a higher abundance of Lachnospiraceae were more prone to anastomotic insufficiencies [7]. A higher abundance of Bacteroidaceae is associated with an increased risk of anastomosis insufficiency [8]. In patients with colorectal carcinoma, abundant Bifidobacterium genus in the colorectal tissue is associated with an increased risk of anastomotic insufficiency [9]. A recent study from 2021 showed that rectal or colonic surgery could impact the microbiome for two years, and even after that time, the baseline was not reached. Diversity in patients with complications was lower than that in patients without complications [10].
After the resection of colorectal carcinoma, Pseudomonas, Enterococcus, Staphylococcus, and Enterobacteriaceae were significantly increased, and short-chain fatty acids (SCFAs) were significantly decreased [11]. Meta-analysis revealed that patients who had gastrointestinal surgery and higher diversity with more beneficial bacteria postoperatively also had a better outcome [12]. One study examined the skin microbiome after colorectal surgery and demonstrated a decrease in alpha diversity [13].
A further complication after colorectal surgery can be an ileus. Patients who had suffered a postoperative ileus had a significantly altered gut microbiome compared to patients who returned to normal bowel function [14].
In a study from Asia with 45 patients with oesophageal squamous cell carcinoma, Streptococcus and Prevotella spp. in the oesophageal tissue were independent risk factors for prognosis [15]. Patients with gastric cancer also experience changes in the microbiome during the perioperative period. Compared to the preoperative sample, genera Escherichia/Shigella, Akkermansia, Dialister, and Lactobacillus were more abundant [16].
In patients with gastric carcinoma, a shift in the gut microbiome was demonstrated in the perioperative setting. Thus, patients had fewer Bacteroides, and more Escherichia/Shigella, Clostridium, and Veillonella than healthy individuals did after gastrectomy. Patients also had a nonsignificant decrease in short-chain fatty acids in their stool after gastrectomy [16]. Furthermore, a more similar microbiome (lower beta diversity) between the oral and gastric microbiomes was associated with a lower risk of anastomotic leak after oesophageal resection [17].

3. Complications during Chemo- and Immunotherapy

Patients who suffer from gastrointestinal cancer often receive adjuvant or neoadjuvant chemotherapy, which alters the gut microbiome [18]. A retrospective study showed that patient outcomes can be improved during immunotherapy with bevacizumab using antibiotics. Patients with metastatic colorectal carcinoma had lower mortality rates if treated with antibiotics for a more extended period [19]. Another study showed that Fusobacterium nucleatum was abundant in colorectal-carcinoma patients with recurrence after chemotherapy. This study showed that F. nucleatum controls the Toll-like receptor, microRNA, and autophagy network, thus influencing cancer chemoresistance [20]. Among others, the Fusobacterium nucleatum bacterium is associated with a reduced response to chemotherapy [5][21].
Chemotherapy CapeOx includes capecitabine plus oxaliplatin. A study by Kong et al. showed that surgery and CapeOx chemotherapy significantly altered the gut microbiome, and may lead to an abundance of pathogenic bacteria [4]. Similar results were obtained in a study investigating chemotherapy-induced diarrhoea (CID) in patients with Stage III colorectal cancer after CapeOx chemotherapy and surgery. Here, a dysbiosis of the intestinal microbiome was found in CID patients compared to patients without CID. Among others, Klebsiella pneumoniae was most frequently detected in CID patients [22].
Another problem is the resistance of tumour cells to 5-fluorouracil (5-FU). Fusobacterium nucleatum also seems to play a role here by upregulating the expression of BIRC3 in tumour cells, thereby causing them to become insensitive to 5-FU [23]. In addition, Fusobacterium nucleatum is associated with oesophageal squamous cell carcinoma and cancer-specific survival [24], whereas probiotics, including Bifidobacterium bifidum, improve the outcome of 5-FU chemotherapy in rats with chemically induced colorectal cancer by enhancing the antitumour effect [25]. Carboxymethyl pachyman (CMP) is a polysaccharide that has anti-inflammatory and immune regulatory effects. In colorectal-carcinoma mice treated with 5-FU, the additional administration of CMP restored the diversity of the gut microbiome [26]. In patients with advanced gastric cancer, patients who had received neoadjuvant chemotherapy before surgery also had increased postoperative infections. Lower diversity and reduced Bifidobacterium, Faecalibacterium, and Ruminococcus in patients with postoperative infections were detected [27]. The next step is to modify the effects of Fusobacterium nucleatum to improve patient outcomes. A first study addressed this goal and demonstrated that Paris polyphylla, a herbal medicine, could inhibit both colorectal-cancer and Fusobacterium nucleatum growth in human colorectal-cancer cell lines [28].
Another complication of chemotherapy is mucositis, which is a dose-limiting factor. Thus, mucositis seems to be a complex interplay among the intestinal microbiome, the host cells, and the intestinal microenvironment. Unfortunately, only bacteria that promote mucositis, such as Enterobacteriaceae, and no protective bacteria were identified so far [29]. The administration of probiotics and omega-3 fatty acids in an RCT study of 140 patients benefited quality of life and side effects such as diarrhoea, nausea, and vomiting [30].

More
© Text is available under the terms and conditions of the Creative Commons Attribution (CC BY) license; additional terms may apply. By using this site, you agree to the Terms and Conditions and Privacy Policy.
Upload a video for this entry
Information
Subjects: Oncology ; Surgery
Contributor MDPI registered users' name will be linked to their SciProfiles pages. To register with us, please refer to https://encyclopedia.pub/register :
Felix C.F. Schmitt
View Times: 110
Entry Collection: Gastrointestinal Disease
Revisions: 3 times (View History)
Update Time: 02 Nov 2021
Table of Contents
1000/1000
Hot Most Recent