Submitted Successfully!
Thank you for your contribution! You can also upload a video entry related to this topic through the link below:
https://encyclopedia.pub/user/video_add?id=15595
Check Note
2000/2000
Vitamin D and Primary Ciliary Dyskinesia
Edit
Upload a video
This entry is adapted from 10.3390/app11093818

Primary ciliary dyskinesia (PCD) is a genetic disease characterized by abnormalities in ciliary structure/function. Low plasmatic level of this vitamin is present in the PCD population. The utility of vitamin D supplementation may be essential in this group of individuals.

Motile cilia malfunction causes primary ciliary dyskinesia or PCD. It is a genetic disease, which affects nearly 1:10,000 people worldwide with slightly geographic variation [1]. The symptomatology begins in the newborn period. The spectrum includes a chronic nasal discharge associated with a wet cough. In childhood, it progresses to recurrent upper and lower respiratory infections. It may eventually evolve in pulmonary scarring with the formation of bronchiectasis. It is well known that a dysfunction of the airways’ motile cilia is the basis of the symptoms. The airway motile cilia are specifically accountable for mucus clearance in the airways. In addition, motile cilia are crucial for the life of an organism. They are present in the brain, fallopian tube, eustachian tube, and middle ear. They function in fluid movement and play a crucial role in the embryonic node during development. Situs inversus, opposite of the situs solitus with a typical arrangement, is a congenital condition in which the major visceral organs are mirrored or reversed from their standard locations [2][3][4]. In approximately half of the patients harboring PCD, there are defects in the nodal cilia, which cause situs inversus [2][5][6].

2. PCD under the Lens

PCD is characterized by genetic heterogeneity with variable clinical impact. Genetic studies have discovered 40 PCD-associated genes. Mutations in known PCD genes are responsible for nearly 70% of all PCD cases [7]. The classic “hallmark” of PCD relies on the ultrastructural axonemal defects, including an absence of inner and outer dynein arms, absence of the outer dynein arm only, lack of inner dynein arms associated with microtubular disorganization, and/or central pair organization defects (Figure 1) [8]. 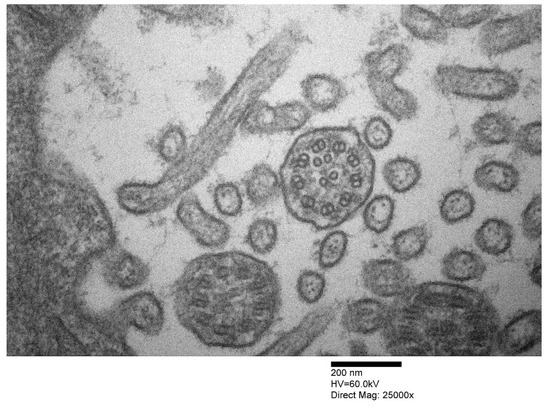 There is a positive association between lung function and body mass index in PCD [9][10], but the nutritional status of children affected with PCD may be relatively low. Marino et al. found that the healthy phenotype of a cohort of children with PCD may be quite altered [11]. Although weak, there is an association between lung function and nutritional status and the bioelectrical impedance spectroscopy (BIS) phase-angle measures. Therefore, BIS has been explicitly utilized to determine body composition in different settings.

It has been shown to identify differences in nutritional state and clinical outcome. Marino et al. emphasized that the use of BIS phase-angle may allow for early identification of at-risk children and may, therefore, be of benefit for nutritional assessments in the appropriate clinical setting [11]. A low BIS phase angle is associated with more inferior dietary status, which may precede anthropometric changes and impact clinical outcomes. Marino et al. found that in children with PCD, there were some associations between BIS phase angle, nutritional status, and clinical outcomes. They advocate for the routine use of BIS phase angle to add sensitivity and specificity in identifying children with nutritional risk earlier than using anthropometry alone. Marino et al.’s study [11] is paramount for identifying PCD patients at nutritional risk and looking for biomarkers of chronic inflammation in PCD. Their study involved 43 children, of which 51% were male. The average age at diagnosis was 2.7 ± 3.8 years, and at the time of the survey was 7.0 ± 3.6 years. Although none of the children studied had a low energy intake, 63% had excessive intake and 6% of children consumed inadequate amounts of protein, and 72% consumed 200% of the reference nutrient intake (RNI) [12][13]. The authors found no associations between energy and protein intake concerning BMI, height for age, or BIS phase angle. Although there were no statistically significant variations between the groups, the FEV1 z score was higher in those with a protein intake of 200% of RNI than those with an adequate protein intake. Remarkably, vitamin D insufficiency (<50 nmol/L) was detected in 54% of the patients in the cohort where the plasma was available. Marino et al.’s study data are critical because children in their cohort had insufficient vitamin D levels, but all other micronutrient levels were within the normal range. The observation that lower nutritional status is associated with more impaired lung function in PCD patients, although weak, is similar to that seen in patients with cystic fibrosis (CF), with a relationship described between FEV1 and BMI. Although CF’s main nutritional issues are probably due to intestinal malabsorption secondary to pancreatic insufficiency, PCD patients’ data may be puzzling. This aspect may suggest that chronic suppurative lung disease, independently from pancreatic involvement, may negatively impact nutritional status [14].

Another study involved the measurement of vitamin D levels in 22 patients with PCD [15]. Mirra et al. [15] studied 15 males and seven females, 10.5 years (range, 2–34 years). These authors found that 72% of PCD patients were vitamin-D deficient-to-insufficient and 28% only were sufficient. In addition, 79% of PCD individuals had limitations in performing vigorous activities, and 53% completed less than 3 h of physical activity per week. Mirra et al.’s study data are also vital because they found hypovitaminosis D in young Italian individuals.

In Campania, cheese and milk products are the mainstays of their diet. Thus, if we consider Mirra et al.’s findings and associated with Marino’s data, we should strongly suggest evaluating these individuals’ duodenal function. Vitamin D plays a crucial part in improving the innate immune response [16]. Interestingly, there is some evidence that vitamin D is also valuable for the current pandemic of COVID-19, a multisystemic infection caused by SARS-CoV-2 [17][18][19]. These two studies reveal an extra-immunologic role of vitamin D, particularly the correct intestinal absorption. Thus, vitamin D may play a considerable role in the growth and of individuals with PCD. Children in Western societies are, however, also at risk if living in high-risk groups.