Submitted Successfully!
Thank you for your contribution! You can also upload a video entry related to this topic through the link below:
https://encyclopedia.pub/user/video_add?id=15545
Check Note
2000/2000
Aragonite and Unusual Pigments Identification
Edit

Aragonite is a mineralogical form of calcium carbonate, mainly of biogenic origin. Historical sources report its use in Roman times as an aggregate in mortars, and in the literature it has only been shown in Roman wall paintings. Thus, its use in 16thcentury wall paintings of the church of Santo Stefano in Selva (Cerignale, Apennines of central Italy) is surprising.

The church of Santo Stefano in Selva (Cerignale) (Figure 1), in the Apennines of Piacenza (central Italy), is in a declining state of neglect and decay. Given its location in a remote area, with no tourism, it is not a high priority for the national heritage. The local community pressed for an analytical campaign on the fragments of the few surviving paintings, in order to preserve their memory. 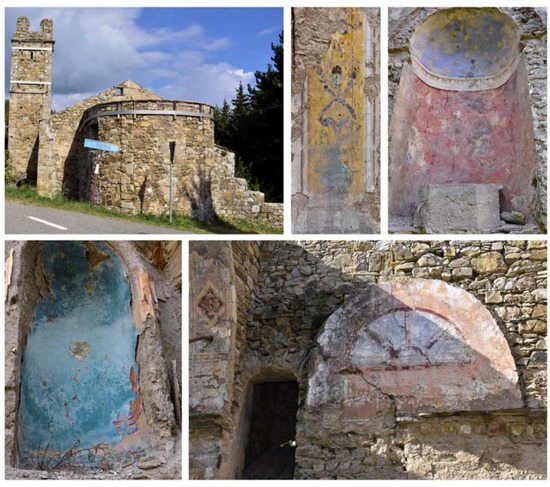 Figure 1. The remains of wall paintings in the church of S. Stefano.

The area between the Po Valley and the Ligurian Sea was once much travelled, and there were also several historical pilgrimages, along important trade ridgeways, such as the salt routes, which involved the exchange of local goods. One of these routes, the “Strada del Cifalco”, followed the natural path of the Trebbia Valley along the ridge between the Aveto and Trebbia rivers, connecting the north of what today is Liguria with Piacenza. It is thus not surprising that the Apennines, the mountainous system of this area, are rich in artistic testimonies, which unfortunately were neglected during the depopulation after the Second World War. This artistic history can be seen in the municipality of Cerignale too: the village of Ponte Organasco, with its medieval layout and many tower houses; the medieval castle of Cariseto, which hosted Emperor Frederick Barbarossa; and the church of Santo Stefano in Selva. The building is located in an area which was once a point of transit and rest for the muleteers travelling between the Trebbia valley and the Aveto valley, on their way to Liguria.
Documentation on the history of the paintings is scarce. The building is listed in a church register which records the churches that in 1523 sent financial dues to the Papal State. The ruins still reveal the elaborate construction technique adopted to simulate a certain opulence, such as the vaulted ceiling, which looks like it is made of stone, but is actually a wooden structure with the intrados made of reeds covered with painted plaster. The facade of the single-nave church is relatively intact, and recalls the classical Greek temple structure. The lesenes support the very elaborate trabeation and triangular tympanum. Three transverse round arches have also remained intact. No records of the wall paintings have been found in the archives. We can thus only assume that the first cycle of paintings dates back to the construction of the building in the 16th century.
The church has almost completely lost the internal wall paintings (Figure 1). The decay originated from the partial settlement of the ground, around the middle of the last century, and more recently from a bolt of lightning that hit the stone bell tower causing a fire that almost completely destroyed the roof.
The present work reports the analytical campaign conducted on fragments from the few wall paintings still in place. The samples were analyzed with optical microscopy and scanning electron microscopy equipped with an energy-dispersive spectrometer, also on polished cross sections, and with X-ray diffraction and infrared spectroscopy on powders. The analyses obtained important information on the pictorial materials, pigments and binders used for the decoration of the walls. Traditional and unusual pigments were revealed together with the widespread use of aragonite probably from shells utilized as a building material.

The fragments analyzed had different colored layers that were identified by IR spectra and XRD analysis of the powders or suggested by EDX elemental spectra and maps (Table 1).
Table 1. Description of the samples, identified pigments and employed analytical techniques (OM: optical microscopy; FTIR-ATR: Fourier-transform infrared spectroscopy in attenuated total reflection; XRD: X-ray diffraction; SEM-EDX: scanning electron microscopy-energy dispersive X-ray spectroscopy; PCS: polished cross section).
Yellow and red ochre were identified based on XRD and FTIR patterns, and then confirmed by iron associated with silicon and aluminum in EDX maps.
The powders of sample ST1, which is colored in aqua green, were analyzed with XRD (Figure 2). A comparison with the instrument database revealed the presence of clinochlore (Mg3(Mg2Al)((Si3Al)O10), which is a member of the chlorite group, with a color that varies between yellowish green, olive green, blackish green and bluish green [5]. The characteristic peaks of calcite (CaCO3), gypsum (CaSO4·2H2O), bassanite (CaSO4·0.5H2O), quartz (SiO2) and barite (BaSO4) were also observed.

Figure 2. Aqua green area of sample ST1: digital microscope image of the surface (a) and XRD analysis on powders (b) showing the main signals of clinochlore (cl).
The pattern of IR bands (Figure 3a) at around 1410 cm−1 (C-O asymmetric stretching) and 1793 cm−1 (combination band), 873 and 712 cm−1 (C-O out-of-plane and in-plane bending vibrations, respectively) is present in all the spectra, which suggests the presence of calcium carbonate as calcite from the binder fraction of the mortar substrate [6][7][8][9][10][11]. The spectra of the white areas present only the peaks at around 1793, 1410, 873 and 712 cm−1, which, as just discussed, refer to calcium carbonate, which constitutes the pigment bianco di Sangiovanni [5]. 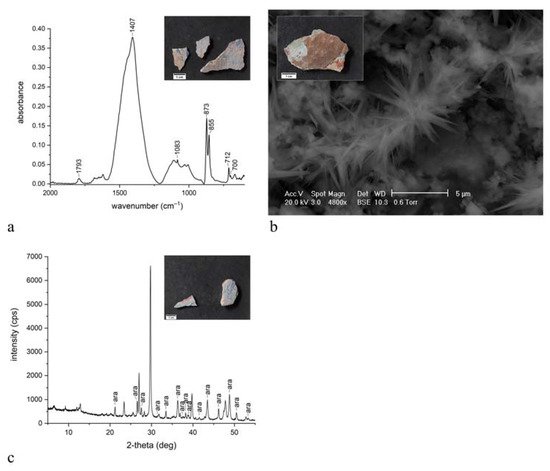 Figure 3. (a) ATR spectra of the red area of sample ST6, showing the peaks of calcite, aragonite, ochre; (b) SEM image in BSE mode of the surface of sample ST19: the typical sharp crystals of aragonite are shown; (c) XRD analysis on powders of mortar support of sample ST2, showing the main signals of aragonite (ara).
The specific peaks at around 1083, 855 and 702 cm−1 found in all the samples suggest the presence of calcium carbonate in the mineralogical form of aragonite, both in the support and mixed with the pigments. The 855 and 702 cm−1 signals are due to ν2 and ν4 CO32− vibrations, respectively, and the absorbance at 1083 cm−1 could be attributed to ν1 symmetric CO32− stretching [12][13]. Figure 3a shows a representative spectrum of aragonite, identified in sample ST6, where the peaks are clearly distinguished from those of calcite. SEM images of sample ST19 (Figure 3b) clearly showed the typical sharp, needle-like crystals of aragonite [14]. Aragonite was always corroborated by the XRD pattern, which also distinguished between the two mineralogical forms of calcium carbonate (Figure 3c).
In some red samples, the EDX investigations showed the distribution of mercury and sulfur in the same area, suggesting the use of cinnabar/vermilion, as in sample ST15 (Figure 4). Similarly, the co-presence of chrome and lead in EDX maps indicated the presence of chrome yellow, as in the yellow area in sample ST11, where the pigment was confirmed by the signals of crocoite (PbCrO4) present in XRD results (Figure 5). 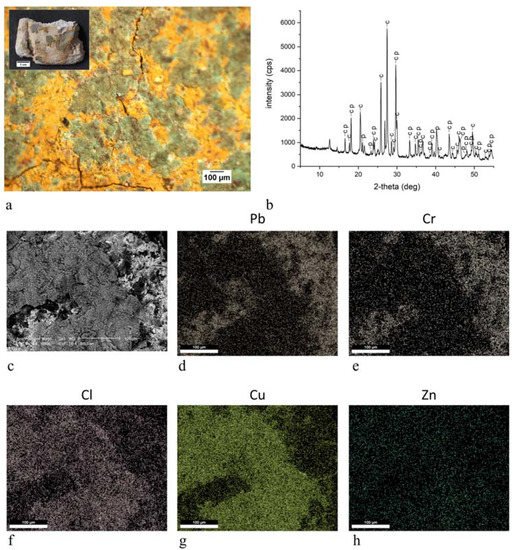 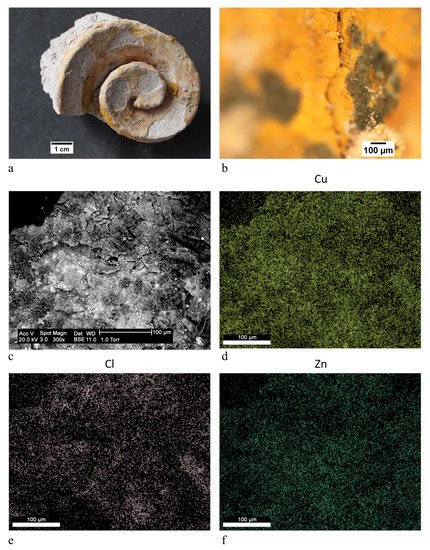 Figure 6. Green area of sample ST8: (a) image of the sample; (b) digital microscope image of details of the green areas of the painted surface (scale bar: 100 μm); (c) SEM image in BSE mode of the painted layer (scale bar: 100 μm); (d) EDX elemental distribution map of copper (scale bar: 100 μm); (e) EDX elemental distribution maps of chlorine (scale bar: 100 μm); (f) EDX elemental distribution maps of zinc (scale bar: 100 μm).
With regards to stratigraphical studies, optical and electronic microscopy revealed a number of colored layers ranging from three to eight. A combination of the EDX elemental maps recorded along the stratigraphy and the IR analysis of the single layers taken, where possible, with micro scalpel, suggested the pigments present in the samples (Table 1). Ochre is the most common pigment, generally alternated with bianco di Sangiovanni white and ultramarine blue. In samples ST3 and ST13, the EDX maps recorded the signals of barium and chrome in the same areas (Figure 7). The combination of these two elements resembles the pigment barium chromate called ultramarine yellow or lemon yellow [5]. Analysis of the polished cross sections revealed strange combinations of pigments. Figure 8 shows the stratigraphy of sample ST20. The inner red layer seems to consist of the overlapping of a layer of cinnabar/vermilion and ochre, due to the presence of an accumulation of mercury and iron, respectively. On the other hand, the alternation of only ochre and azurite was observed in sample ST19. 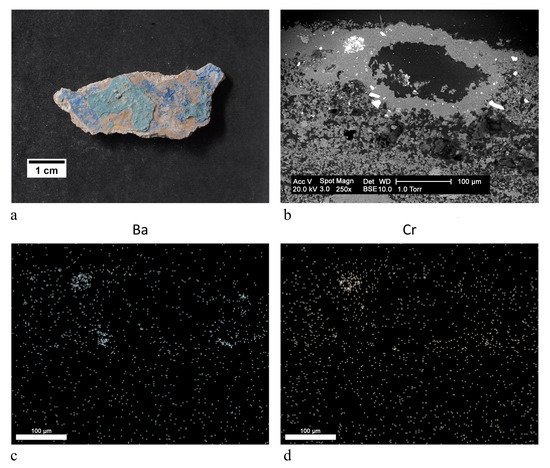 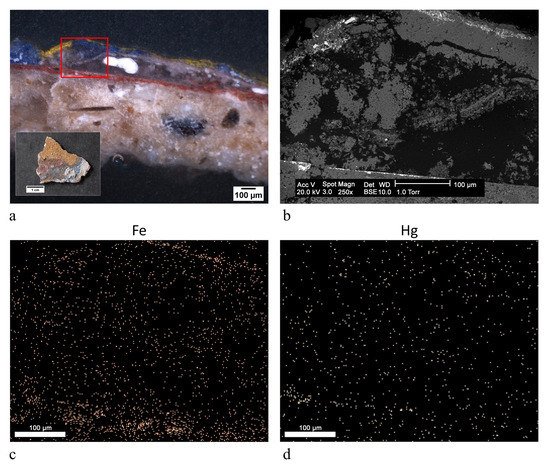 The analysis of the wall paintings of the church of S. Stefano attest to the use of a rich palette of colors and reveal a palimpsest of various painting cycles, as highlighted by the presence of multilayered stratigraphies. Together with common colors, such as ochre, ultramarine blue, bianco di Sangiovanni, cinnabar/vermilion, azurite, a few unusual pigments were identified, specifically clinochlore, Brunswick green, ultramarine yellow, which have rarely been found in painted works of art and never in wall paintings. The presence of these pigments datable to the 19th century, indicate a terminus post quem for the execution of the external pictorial layers. Under the microscope, the underlying layers do not appear to be particularly decayed and therefore did not need to be hidden with other colors. This suggests that the building was painted regularly following whatever tastes were current at the time, using synthetic pigments available on the market from the 19th century. Indeed, there are no records on the most recent restoration works and pictorial cycles. Thus, the identification of modern pigments contributes to shedding light on the non-documented history of the monument.
The results unfortunately also reveal, as expected, the dramatic past and present state of conservation of the paintings. Most have come away from the support; however, those that still survive have been covered on the surface by gypsum and calcium oxalate.
Finally, the ubiquitous presence of aragonite due to the intentional use of shells as an aggregate in mortar is particularly interesting. What is surprising is that the literature shows that this is the only case of this finding in wall paintings that are not from the Roman era. This therefore reveals the use of a building technology from the past in this area of the Apennines, perhaps due to its proximity to the Trebbia River and the Ligurian Sea. It is worth highlighting the importance of this area in trade between the Po Valley and Liguria. It was therefore a very frequented area, probably with the exchange of building practices that could have entailed the use of shells in mortars. It would be interesting to investigate other historical buildings in the area of Cerignale, as the discovery elsewhere of aragonite in mortars would corroborate our hypothesis. Shells were probably used as light aggregate and were therefore easy to transport to the church of S. Stefano, which is located far from the main roads and at an altitude of 700 m. The shells may have originated from the Trebbia River, in the valley below, or in the Ligurian sea, to which the Trebbia valley was connected.
The analyses carried out provide evidence of the unexpected richness and variety of the paintings in the church of S. Stefano, which is at real risk of fading. It is thus important to underline the fundamental role of conservation science, which, by studying the techniques and materials used by the artists of the past, may encourage future restoration projects and enhances and preserves the disappearing beauty.