Submitted Successfully!
Thank you for your contribution! You can also upload a video entry related to this topic through the link below:
https://encyclopedia.pub/user/video_add?id=15506
Check Note
2000/2000
Post-Ischemic Tau Protein
Edit
Upload a video
This entry is adapted from 10.3390/cells10092213 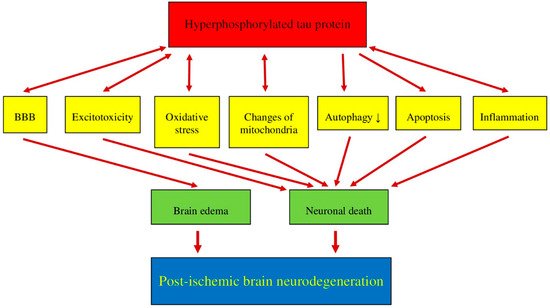 It is well known that autophagy plays a key role in the maintenance of normal levels of tau protein in neuronal cells [63][64][65]. Autophagy has been shown to be an important neuropathophysiological process in brain neurodegeneration after an ischemic stroke [66]. Previous research has shown that a decrease in the tau protein is correlated with an increase in an autophagy marker such as microtubule-associated protein 1A/1B-light chain 3B-II in a 3xTg mouse model of Alzheimer’s disease after reversible hypoperfusion, indicating that autophagy may be a way to reduce the dysfunctional tau protein levels in the brain [67]. In contrast, another study reported a significant reduction in microtubule-associated protein 1A/1B-light chain 3B protein growth and a reduction in infarct size in the P301L-Tau mouse model after ischemia [68]. It might be probable that autophagy insufficiency is triggered by a mutant tau protein with increased levels of its aggregates [68]. In addition, it has been documented that autophagy can induce tau protein expression in neuronal cells that overexpress the human P301L-Tau mutant [69]. In human tauopathies, p62 is an autophagy regulatory protein and its immunostaining co-localizes with tau protein inclusions [70]. In transgenic mice, the activity of autophagy may increase the clearance of the tau protein [71] and thus, reduce the aggregation of the seeded tau protein [72]. The phosphorylation of the tau protein is believed to be due to seeded aggregation [73]. The P62 and nuclear dot 52 protein are among the autophagy cargo receptors playing an important role in protecting against the aggregation of the seeded tau protein in neurons [69][74]. It is, therefore, highly likely that autophagy, not proteasomes, reduces the aggregation of the seeded tau protein (Figure 1) [69].

Apoptosis is naturally programmed cell death, acting as the most important and dangerous neuronal killer following brain ischemia [75]. Tau protein hyperphosphorylation and apoptosis are believed to be two self-contained, self-sufficient, and overlapping neuropathological processes during neuronal death (Figure 1), although most researchers have found no significant relationship between these phenomena [76][77]. However, some studies have shown an ischemic accumulation of cyclin-dependent kinase-5 [5], which regulates tau protein phosphorylation, and may initiate neuronal apoptosis through degradation of the endoplasmic reticulum [78]. It has also been documented that hyperphosphorylation of the tau protein can be prevented by knocking down cyclin-dependent kinase-5, which may protect neuronal cells by alleviating endoplasmic reticulum stress from apoptosis [78]. Recent studies indicate that after cerebral ischemia, hyperphosphorylated tau protein accumulates in cortical neurons and is associated with their apoptosis (Figure 1) [1][2][3][4][5][6]. The above data clearly indicate that neuronal apoptosis after cerebral ischemia is associated with the hyperphosphorylation of the tau protein (Figure 1).

More
© Text is available under the terms and conditions of the Creative Commons Attribution (CC BY) license (http://creativecommons.org/licenses/by/4.0/)
Upload a video for this entry
Information
Subjects: Cell Biology
Contributor MDPI registered users' name will be linked to their SciProfiles pages. To register with us, please refer to https://encyclopedia.pub/register :
Ryszard Pluta
View Times: 45
Revisions: 2 times (View History)
Update Time: 29 Oct 2021
Table of Contents
1000/1000
Hot Most Recent