Submitted Successfully!
Thank you for your contribution! You can also upload a video entry related to this topic through the link below:
https://encyclopedia.pub/user/video_add?id=15490
Check Note
2000/2000
Rice OsHKT1;3 Variants
Edit
This entry is adapted from 10.3390/plants10102006

In rice, the high-affinity K+ transporter, OsHKT1;3, functions as a Na+-selective transporter. mRNA variants of OsHKT1;3 have been reported previously, but their functions remain unknown. In this study, five OsHKT1;3 variants (V1-V5) were identified from japonica rice (Nipponbare) in addition to OsHKT1;3_FL. Absolute quantification qPCR analyses revealed that the transcript level of OsHKT1;3_FL was significantly higher than other variants in both the roots and shoots. Expression levels of OsHKT1;3_FL, and some variants, increased after 24 h of salt stress. Two electrode voltage clamp experiments in a heterologous expression system using Xenopus laevis oocytes revealed that oocytes expressing OsHKT1;3_FL and all of its variants exhibited smaller Na+ currents. The presented data, together with previous data, provide insights to understanding how OsHKT family members are involved in the mechanisms of ion homeostasis and salt tolerance in rice.

Salinity is a dominant abiotic stress that decreases crop growth and productivity to a great extent [1][2][3][4]. Salt stress imposes ion toxicity, osmotic stress, metabolic disturbance imbalance, and a significant decrease in plant yield [5][6][7][8]. Among cereals, rice (Oryza sativa L.) is one of the most consumed staple crops around the world, and it is sensitive to salinity stress at different growth stages [9][10].
High-affinity potassium transporters (HKTs) are responsible for ion homeostasis and salt tolerance in plants [11][12][13]. Plant HKTs are divided into three classes: class 1 HKT proteins (HKT1s) function mainly as Na+-selective transporters, and they are present in both monocotyledonous and dicotyledonous plants; class 2 HKT proteins (HKT2s) function mainly as Na+-K+ symporters, and are present only in monocotyledonous plants; class 3 HKT proteins (HKT3s) are present in mosses and clubmosses, and their selectivity for Na+ and/or K+ is not yet clearly understood [14][15][16][17][18]. TaHKT2;1 was the first HKT characterized, and it has dual functions as a high-affinity Na+-K+ symporter or a low-affinity Na+ transporter according to the external Na+ concentration [19][20]. There is extensive evidence indicating the central role of HKT genes as Na+ and Na+/K+ transporters in controlling Na+ accumulation and salt tolerance in the halophytic turf grass, Sporobolus virginicus, as well as Arabidopsis thaliana, barley, soybeans, and rice [21][22][23][24][25][26][27]. Seven functional HKT genes from rice have been identified. Among them, OsHKT1;1, OsHKT1;3, OsHKT1;4, and OsHKT1;5 were shown to be Na+-selective [22][28][29][30][31][32]. In addition, the OsHKT1;1 gene was identified as a determinant of salt tolerance in rice [33]. An OsHKT1;1 isoform from indica induced higher inward Na+ currents than the japonica-predominant isoform in a heterologous Xenopus laevis oocyte expression system [34]. OsHKT1;4 mediated robust Na+ transport in yeast cells and X. laevis oocytes [35]. Moreover, OsHKT1;4 was involved in Na+ accumulation in the rice shoots, especially in reproductive tissues, upon salt stress [35][36].
OsHKT1;3 was identified as a Na+-selective transporter [29], and its expression was detected in the cortex and vascular tissue of the roots and leaves. Transcripts of OsHKT1;3 were also detected in both salt-tolerant Pokkali and salt-sensitive Nipponbare cultivars [37]. In addition, a high expression of OsHKT1;3 was detected in a Cheongcheong rice cultivar [38]. Abdulhussein et al. [39] reported that the OsHKT1;3 gene played a role in the accumulation of Na+ in old leaves. OsHKT1;3 did not show any type of transport activity in yeast cells but mediated both inward and outward Na+ currents in X. laevis oocytes [28][29][30]. According to Sundstrom [40], the OsHKT1;3 produced a splice variant in addition to the full-length OsHKT1;3. However, the function of the variant is not yet known.
In the present study, we confirmed OsHKT1;3 variants in a salt-sensitive japonica rice, Nipponbare, analyzed their expression patterns, and characterized transport properties using two electrode voltage clamp (TEVC) experiments using X. laevis oocytes, to discuss new aspects of OsHKT1;3 variants. 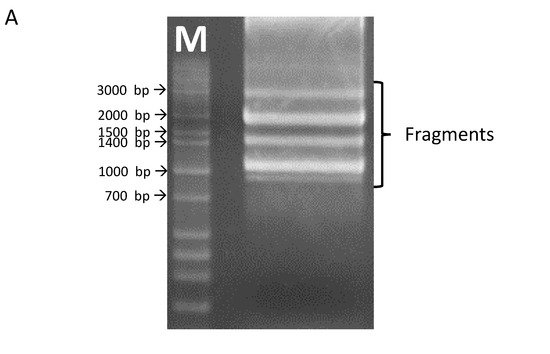 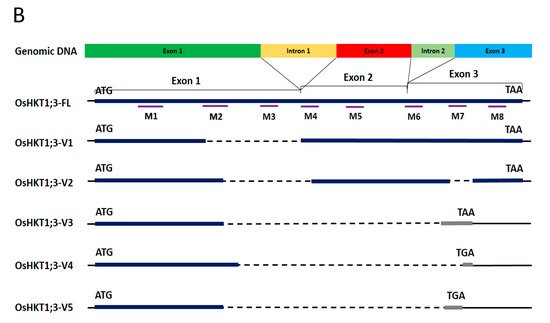 Figure 1. OsHKT1;3 transcripts identified in Nipponbare rice. (A) A gel image of RT-PCR products amplified with primers for OsHKT1;3. (B) Schematic diagrams of OsHKT1;3_FL and its variants. Bold lines indicate amino acid regions that were the same as FL (blue) or different from FL because of the frame shift (grey). The thin lines indicate non-translated regions, and dotted lines indicate missing nucleotide regions (gap) compared to the FL sequence. M1–M8 indicate transmembrane domains predicted using previously registered data from the UniPort database.

Fourteen-day-old Nipponbare rice plants were examined for the tissue-specific expression profiles of OsHKT1;3 in normal growth conditions. The mRNA amounts in the roots and shoots were determined using the absolute quantification method. As a result, the transcript level of OsHKT1;3_FL was significantly higher than other variants, and OsHKT1;3_V1 was lower in both the roots and shoots (Figure 2). No differences in the levels of transcripts were detected between the shoots and roots in the FL, or in any variants at p < 0.05 (data not shown). 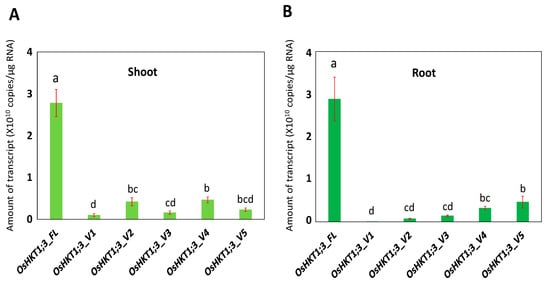 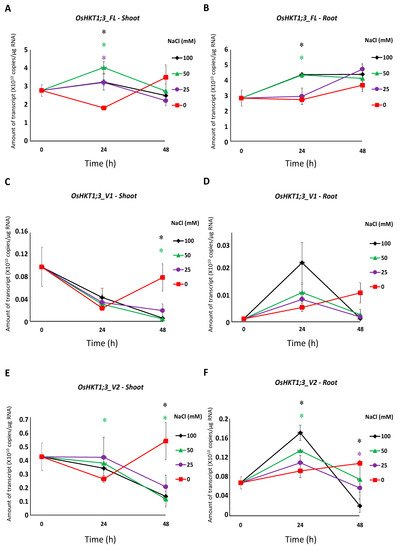 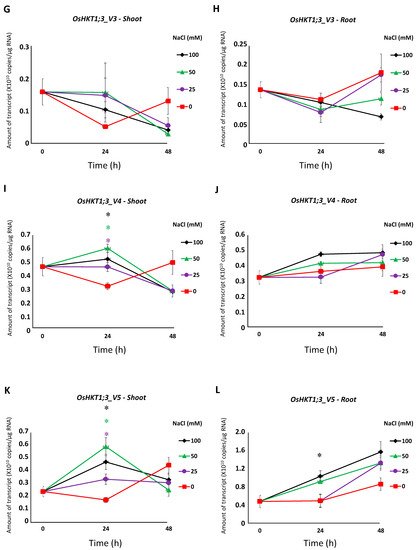 HKTs play important roles in the salt tolerance, ion homeostasis, and distribution of Na+ in plant cells and tissues in salt stress conditions, along with other Na+ transporters [13][14][41].
Previously, several splicing variants of OsHKT1;1 have been reported in the salt-tolerant indica rice, Pokkali [31]. Similarly to OsHKT1;1, it has been reported in a Ph.D. thesis from the University of Adelaide that OsHKT1;3 also produced a spliced variant [40]. In the present study, several splice variants of OsHKT1;3 were confirmed in the salt-sensitive japonica rice, Nipponbare (Figure 1).
Class 1 HKT transporters have been demonstrated to have important roles in Na+ exclusion and salt tolerance mechanisms in several plant species. In rice, the vital role of OsHKT1;1 in Na+ exclusion from the shoots, regulation of Na+ content in the roots, and the Na+ recirculation mechanism from the shoots to the roots was demonstrated [34][42]. The expression of OsHKT1;1 increased in the shoots, but not in the roots [31][42], in salt stress conditions. OsHKT1;5, a Na+-selective transporter, has been indicated to protect leaves, including young ones, in rice through Na+ unloading from the xylem of the roots and sheaths, and the phloem at the basal node, in salt stress conditions [22][29][43]. OsHKT1;4 was demonstrated to be involved in Na+ exclusion in the stems and leaf sheaths (reducing Na+ in leaf blades) of a japonica rice cultivar at the reproductive growth stage [35]. In addition to these OsHKT1 genes, OsHKT1;3 was reported to be involved in salt tolerance [29][30]. The strong expression of OsHKT1;3 in bulliform cells, large, highly vacuolated cells of the adaxial epidermis, may indicate the involvement of OsHKT1;3 in the Na+ recirculation mechanisms from the shoots to the roots [29]. However, the detailed physiological functions of OsHKT1;3 are yet to be elucidated. The present study investigated the function of the OsHKT1;3 variants in japonica accessions.
OsHKT1;3_FL, identified in the present study, was most-closely similar to the previously registered OsHKT1;3 (XM_015770707.2) in the National Center for Biotechnology Information (https://www.ncbi.nlm.nih.gov/nuccore/XM_015770707.2, accessed on 27 July 2021). Oocytes expressing OsHKT1;3_FL in the present study showed a small Na+ current (Figure 4A) as reported previously [30]. However, the transport functions and expressions of OsHKT1;3 variants have not been investigated so far. As seen in Figure 4A,B, all oocytes expressing OsHKT1;3 variants showed small currents in the presence of 96 mM Na+. OsHKT1;3_V3, _V4, and _V5 were short-length variants, and oocytes expressing these variants showed slightly larger bidirectional currents (Figure 4B), but the biochemical functions and physiological roles of such variants remain to be investigated. 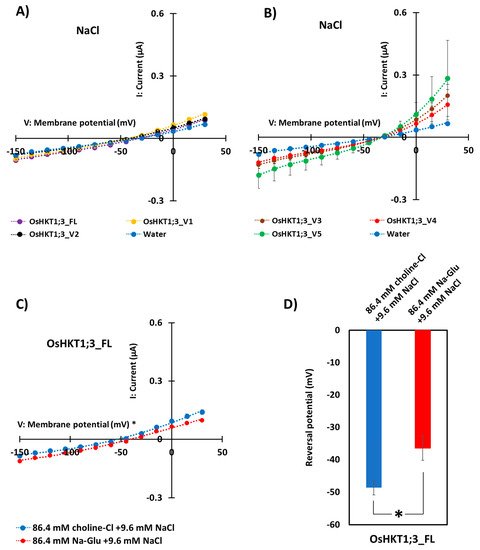 Figure 4. Ion transport activity of OsHKT1;3_FL and its variants. Two electrode voltage clamp experiments using Xenopus laevis oocytes were conducted. (A) Current–voltage relationships from oocytes expressing OsHKT1;3_FL, _V1, _V2, and water-injection control in a 96 mM NaCl external solution. (B) Current–voltage relationships from oocytes expressing OsHKT1;3_V3, _V4, _V5, and water-injection control in a 96 mM NaCl external solution. (C) Current–voltage relationships from oocytes expressing OsHKT1;3_FL in an 86.4 mM choline Cl +8.6 mM NaCl external solution and an 86.4 mM Na-gluconate +8.6 mM NaCl external solution. (D) Reversal potential shift analysis conducted by changing the external Na concentration from 96 mM to 9.6 mM. All external solutions contained, as background elements, 1.8 mM CaCl2, 1.8 mM MgCl2, 1.8 mM mannitol, and 10 mM HEPES (pH 7.5 with Tris). Water was injected as a negative control. Data are means ± SE, n = 8–10. Two independent experiments were performed, and similar results were obtained. TEVC data were fitted with polynomial approximations (degree 3) in (A–C). The significant difference in (D) is indicated with an asterisk (p < 0.05).
According to Jabnoune et al. [29], the expression of OsHKT1;3 showed no significant changes in the roots and leaves in different growth conditions. In addition, OsHKT1;3 expression levels in the Pokkali variety were lower in the roots than that of the sensitive cultivar, Nipponbare [37]. Moreover, Farooq et al. [38] reported recently that OsHKT1;3 (OsHKT6) showed high expression in a Cheongcheong rice variety. In the present study, the OsHKT1;3_FL mRNA was the most abundant in both the roots and shoots among the variants identified (Figure 2). This was different from the OsHKT1;1 transcript [31], in which the transcript of OsHKT1;1_FL was less abundant, and a variant (OsHKT1;1_V1) was most abundant.
The expression of OsHKT1;3_FL and some of its variants increased at 24 h of salt stress (Figure 3), and such results may indicate that OsHKT1;3 and its variants were involved in salt tolerance or ion homeostasis at 24 h, at least partially. However, OsHKT1;3 (both FL and all variants) induced only small Na+ currents in the heterologous expression system using X. laevis oocytes (Figure 4), and showed a relatively stable, but not greatly enhanced, expression pattern after NaCl treatment. These results may suggest that OsHKT1;3 mainly played a supplementary role in salt tolerance or a house-keeping role in rice, unlike other OsHKTs that play critical roles in salt tolerance. The present data, together with previous data, have elucidated various characteristics among OsHKT family members, and will provide insights into how they are involved in the mechanisms of ion homeostasis and salt tolerance in rice.

More
© Text is available under the terms and conditions of the Creative Commons Attribution (CC BY) license (http://creativecommons.org/licenses/by/4.0/)
Upload a video for this entry
Information
Subjects: Plant Sciences
Contributor MDPI registered users' name will be linked to their SciProfiles pages. To register with us, please refer to https://encyclopedia.pub/register :
Shahin Imran
View Times: 52
Revisions: 3 times (View History)
Update Time: 29 Oct 2021
Table of Contents
1000/1000
Hot Most Recent