Submitted Successfully!
Thank you for your contribution! You can also upload a video entry related to this topic through the link below:
https://encyclopedia.pub/user/video_add?id=15462
Check Note
2000/2000
Carnitine in Mitochondrial Fatty Acid Transport and β-Oxidation
Edit
This entry is adapted from 10.3390/molecules25010182

l-Carnitine is an amino acid derivative widely known for its involvement in the transport of long-chain fatty acids into the mitochondrial matrix, where fatty acid oxidation occurs. Moreover, l-Carnitine protects the cell from acyl-CoA accretion through the generation of acylcarnitines.

Carnitine (3-hydroxy-4-N-trimethylaminobutyrate) represents an amino acid derivative and a micronutrient that plays a key role in intermediary metabolism with the main function being the transport of long-chain fatty acids from the cytosol to the mitochondrial matrix where fatty acid β-oxidation occurs. Other established functions of carnitine are the preservation of membrane integrity [1], the stabilization of a physiologic coenzyme A (CoASH)/acetyl-CoA ratio in mitochondria, and the reduction of lactate production [2][3].
Carnitine is present in most, if not all, animal species and in several micro-organisms and plants. In the human body, carnitine is mainly found in a free form (free carnitine) and in the form of acylcarnitine esters, a pool of carnitine bound to various acyl groups that are delivered throughout the body for a wide range of functions [4]. At rest, the skeletal muscle carnitine pool is distributed as 80–90% free carnitine, 10–20% short-chain acylcarnitines (with a number of carbon atoms <10), and <5% long-chain acylcarnitines (with a number of carbon atoms >10) [5].
It has been estimated that the total carnitine content in the human body is about 300 mg/kg, with about 95% stored intracellularly in the heart and skeletal muscle, and the remaining part in the liver, kidney, and plasma [6]. The amount of circulating plasma carnitine accounts for only 0.5% of total body carnitine [7].
Carnitine does not undergo metabolic changes and, therefore, is eliminated as free carnitine in urine. However, a part of carnitine that is not absorbed at the level of the small intestine is completely degraded by bacteria in the large intestine to produce trimethylamine, a quaternary amine that, after enterocyte absorption, is oxidized in the liver by flavin-containing monooxygenase 3 to form trimethylamine-N-oxide (TMAO) [8].
In light of the fundamental role of carnitine in fatty acids β-oxidation for energy production, studies have been conducted to understand whether carnitine supplementation can affect skeletal muscle function and athletic performance in healthy individuals [2][9]. There is controversy as to whether or not carnitine administration can improve physical performance. The difference in exercise intensity, the training or conditioning of the subjects, the amount of carnitine administered, the route of administration, and the timing of administration relative to the exercise led to different experimental results [10].

Humans obtain carnitine mainly from the diet, predominantly from animal-based food products such as red meat, chicken, fish, and dairy. Only 25% of carnitine comes from endogenous synthesis [2][11]. Carnitine biosynthesis requires two essential amino acids: l-lysine, which provides the carbon backbone, and l-methionine that furnishes the N-methyl group [12]. The pathway of carnitine synthesis requires vitamin C, vitamin B6, niacin, and reduced iron as cofactors [13][14]. Lysine residues in some proteins undergo N-methylation using S-adenosylmethionine as a methyl donor, forming 6-N-trimethyl-lysine residues which are converted in carnitine in four enzymatic steps, namely hydroxylation at carbon 3, aldol cleavage, oxidation of the aldehyde to 4-butyrobetaine and hydroxylation of 4-butyrobetaine at carbon 3 [15]. The last enzymatic step is catalyzed by the enzyme 4-butyrobetaine dioxygenase to yield carnitine. It is generally recognized that the first three reactions of carnitine synthesis are widely distributed in the body but the final reaction is only present in the liver, kidney, and brain [7]. Thus, other tissues depend on carnitine uptake from the circulation.
Carnitine homeostasis is guaranteed by intestinal absorption from the diet, modest endogenous synthesis, and efficient renal reabsorption. Intestinal absorption of carnitine occurs by both passive (small intestine and colon) and active (duodenum and ileum) mechanisms [16]. The renal process ensures tubular reabsorption of about 98–99% of filtered carnitine thus conserving a normal carnitine level also in strict vegetarians (vegans) and lacto-ovo-vegetarians [17]. The renal threshold for carnitine excretion is about 50 µmol/L that is about the same value as the normal carnitine plasma concentration [18]. Thus, when plasma carnitine concentration raises, the renal excretion increases whereas the reabsorption decreases, thus maintaining baseline carnitine plasma level [18]. The opposite occurs when the plasma carnitine level is decreased, as in the case of low dietary intake of carnitine [18]. Neither renal reabsorption nor changes in dietary carnitine intake appear to affect the rate of endogenous carnitine synthesis [19][20].
The plasma membrane transport of carnitine is made by the carnitine/organic cation transporters (OCTN), a family of transporters that consists of three isoforms, i.e., OCTN1 (Scarnitine22A4) and OCTN2 (Scarnitine22A5) in humans and animals [21], and Octn3 (Slc22a21) in mice and humans [22]. Among them, OCTN2 is a high-affinity plasma membrane protein that can transport carnitine in a sodium-dependent manner and whose functional defect causes primary systemic carnitine deficiency [23]. OCTN2 is mainly involved in maintaining carnitine homeostasis that results from intestinal absorption, distribution to tissues, and renal excretion/reabsorption. OCTN2 has a high affinity for carnitine and its derivatives and it is present not only at the level of polarized cells of intestine, kidney, placenta and mammary gland but also in other tissues such as liver, heart, testis, skeletal muscle and brain [24][25]. OCTN1, highly expressed at the renal epithelium level and, to a lesser extent, in other tissues, is also involved in carnitine transport but with a lower affinity with respect to OCTN2 [23][24]. Moreover, other transporters such as ATB0,+ [26] and carnitine transporter-2 [27] can also carry carnitine.
Among different peripheral tissues, muscle is probably the main target of carnitine transport. About 90–95% of total carnitine is concentrated in muscle, and the ratio between muscle carnitine concentration and plasma concentration is around 50:1 [28].
Carnitine transport defect, associated with mutations in the OCTN2 transporter, causes profound intracellular and plasma carnitine depletion and very high renal carnitine excretion [29]. The consequence of such a defect is the inability of carnitine to perform its functions, particularly in β-oxidation. Metabolic and clinical aberrations associated with the defect in carnitine transport can be prevented by oral supplementation of pharmacological carnitine dosages (100–400 mg/kg/day). Due to the defective OCTN2, this treatment can increase the plasma carnitine level nearly to normal values but does not bring muscle carnitine concentration to normal values [29].

3. Role of Carnitine in Mitochondrial Fatty Acid Transport and β-Oxidation

Fatty acids from different sources (diet, endogenous de novo synthesis and adipose tissue hydrolysis) can cross the plasma membrane and enter the muscle cell by fatty acid transport proteins (FATPs), fatty acid translocase (FAT/CD36), caveolins and plasma membrane fatty acid-binding proteins (FABPpm) [30]. Once in the cell, long-chain fatty acids are activated to fatty acyl-CoAs by a family of acyl-CoA synthetases (ACS) identified at the plasma membrane, mitochondria, and lipid droplets [31]. FATPs have also ACS activity [32]. The activation reaction, which requires ATP and CoASH, traps long-chain fatty acyl-CoA thioesters inside the cell and, maintaining intracellular free long-chain fatty acids to low concentrations, allows further fatty acid uptake.
As long-chain acyl-CoA derivatives cannot directly cross the mitochondrial inner membrane, the entry of acyl-CoAs into the mitochondrial matrix for β-oxidation is guaranteed, under normal conditions, by carnitine palmitoyltransferase-1 (CPT-1), located on the external surface of the outer mitochondrial membrane [33]. CPT-1 catalyzes the transfer of acyl groups from acyl-CoA to carnitine to produce acylcarnitines and free CoASH (Figure 1). The reaction catalyzed by CPT-1 is tightly regulated to control both fatty acid β-oxidation and ketone body formation [34][35]. There are three different isoforms of CPT-1: CPT-1A, CPT-1B, and CPT-1C [35]. CPT-1 A is expressed in the liver, brain, kidney, lung, spleen, intestine, pancreas, ovary, and fibroblasts [36]. CPT-1B is the muscle isoform and is highly expressed in skeletal muscle, heart, and testis [36]. CPT1-C is the neuron-specific isoform, but its function in neural metabolism remains controversial [37]. CPT-1 is sensitive to inhibition by malonyl-CoA [38]. Since malonyl-CoA represents the product of acetyl-CoA carboxylase, a key enzyme of the cytosolic fatty acid synthesis pathway, malonyl-CoA can reciprocally regulate fatty acid synthesis and oxidation [38]. Thus, a high rate of fatty acid synthesis results in a low rate of fatty acid oxidation, and vice versa. 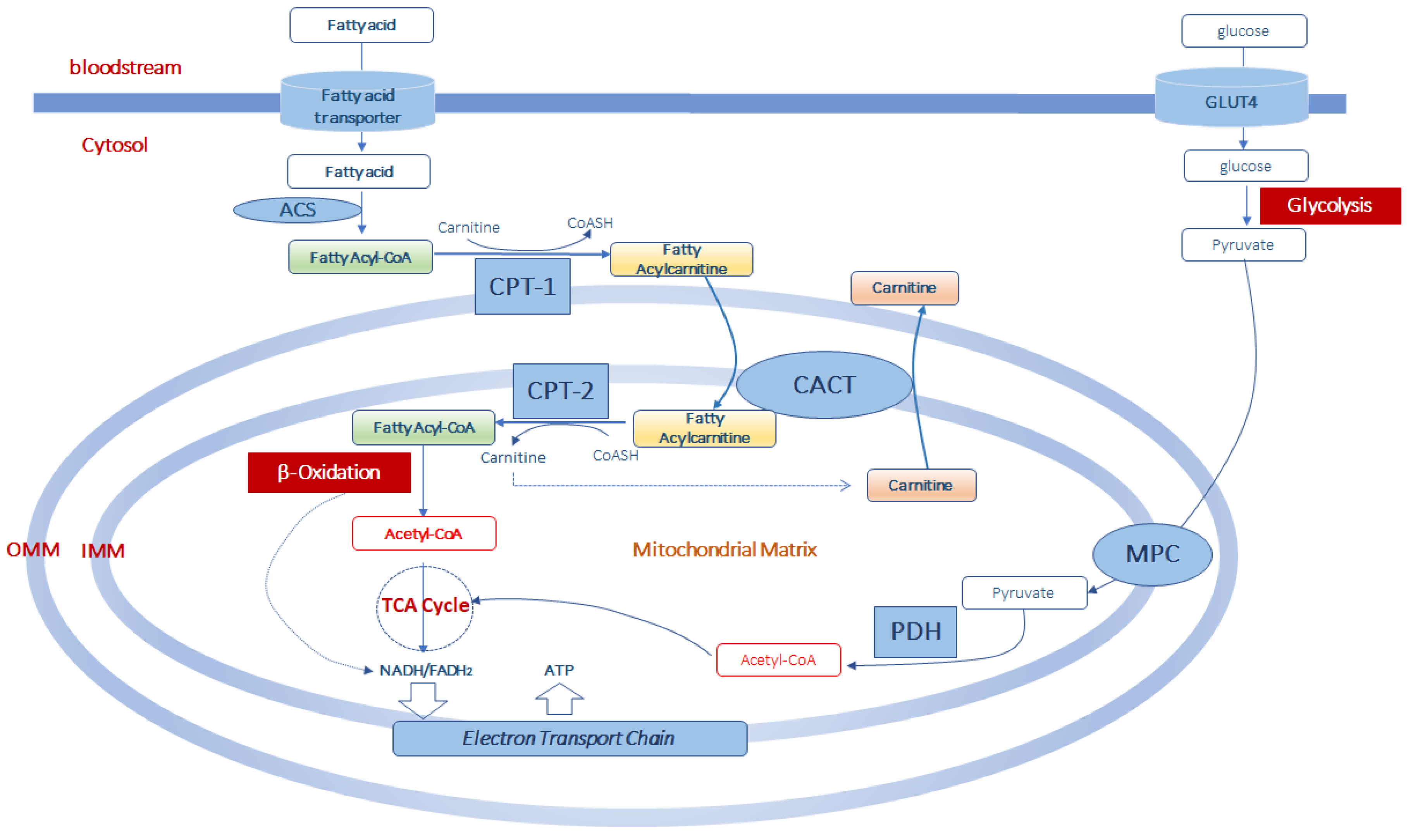