Submitted Successfully!
Thank you for your contribution! You can also upload a video entry related to this topic through the link below:
https://encyclopedia.pub/user/video_add?id=1544
Check Note
2000/2000
HSP90 inhibitors for IPF/COVID-19
Edit
Upload a video
This entry is adapted from 10.3390/ijms21155286

Heat shock protein 90 (HSP90) is an important chaperone that assists the late stage folding of several proteins involved in cell survival in response to environmental stressors. The inhibition of HSP90 is followed by a complex modulation of the proteome and the kinome, that has proved beneficial in cancer and various neurodegenerative diseases. Additionally, accumulating literature suggests that HSP90 may be a key target during the development of pulmonary fibrosis and that its inhibition could serve as a new and exciting therapeutic approach. We have summarized the current evidence about HSP90’s role in Idiopathic Pulmonary Fibrosis (IPF), the results from preclinical studies on its inhibition and the intracellular signaling pathways involved, in a recent review article (Review). In this Article entry, we will introduce the main findings discussed in the review and focus on its translation and possible significance in the era of the SARS-CoV-2 pandemic.

HSP90 is a highly expressed and conserved chaperone, described in diverse isoforms (e.g. α, β, mitochondrial), whose activity is necessary for the proper folding of many client proteins. Different isoform of HSP90 can assemble in heterogeneous or homologous dimers (HSP90αα, HSP90ββ or HSP90αβ), with specific chaperone profiles and affinity for protein partners [1][2]. Few studies have characterized both α and β isoforms behavior [3][4] during the fibrotic process. HSP90β has shown specific tubulin and microtubule-interacting properties playing a role in cell motility, migration and structural cell stability [5]. HSP90α expression is modulated by Signal Transducer and Activator of Transcription 1 (STAT1) and is involved in cell survival by modulating the caspase 3-depending apoptotic pathway [6]. However, more data is required for a better understanding of HSP90 isoforms, especially in order to develop inhibitors with lower or higher affinity.

Fibroblasts represent the central mediators of the fibrotic process as they promote cellular proliferation and deposition of extracellular matrix (ECM) in response to prolonged tissue injury and chronic inflammation [7]. Transforming growth factor-β (TGF-β) is the most important mediator of fibrogenesis, which upregulates and activates fibroblast phenotype and function, inducing fibroblast transdifferentiation [8]. TGF-β signaling is mediated by a complex subset of intracellular mediators divided into the non-Smad- and Smad-dependent signaling pathways [9][10]. HSP90 stabilizes the TGF-β receptor, modulates its signaling cascades and, similarly to TGF-β, directs myofibroblast differentiation.

Samples taken from patients with IPF revealed the presence of both HSP90α and HSP90β in the pulmonary interstitial tissue, whose expression was increased in areas rich in myofibroblasts and fibroblasts [3]. These fibroblasts localized HSP90 mainly in the nucleus and cytosol, and when treated with HSP90 inhibitors, displayed impaired proliferation, migration and differentiation [11]. Indeed, HSP90 administration increased the production of collagen by fibroblasts and the expression of α-Smooth Muscle Actin (α-SMA) by epithelial cells [4]. Thus, HSP90 promotes epithelial-to-mesenchymal transformation (EMT) of epithelial cells and differentiation of fibroblast into myofibroblasts, whereas its inhibition limits the expression of the aggressive phenotype of IPF fibroblasts.

Proteomic profiling plays an important role in biomarker discovery. Proteomic analyses in IPF have been done on peripheral blood, bronchoalveolar lavage fluid (BALF) and lung tissue. While HSP90β-1 was found increased in peripheral blood of patients with IPF [12], both HSP90α and HSP90β were found increased in lung tissue [13][14]. HSP90 exerts distinct roles when expressed intracellularly, intranuclearly or released into the vascular compartment. Indeed, intracellular HSP90 acts as a chaperone, assisting the maturation, correcting the folding and when irreversibly damaged, promoting the degradation of several client proteins [15]. Differently, HSP90 can be released extracellularly in conditions of stress, promoting Antigen Presenting Cells (APC) maturation and, acting as “alarmins”, triggers the immune system response [16]. Thus, IPF displays high levels of HSP90 both intra- and extra-cellularly, which are required for both the augmented intracellular signaling -and subsequent elevated chaperone activity- and for the activation of the immune system in response to the chronic inflammation in the lung.

HSP90 inhibitors modulate and reduce protein trafficking, restore proteostasis and diminish HSP90 chaperone activity, thus blocking the fibrotic process [17]. The number of HSP90 inhibitors has dramatically increased since the first molecule described in 1994 [18]. Geldanamycin is a natural product and a member of the benzoquinone annamycin family that has demonstrated anti-tumor and anti-proliferative characteristics, whose clinical implementation, however, was limited due to liver toxicity [19][20]. 17-N-allylamino-17-demethoxygeldanamycin (17-AAG) is an analog of geldanamycin with higher affinity for the ATP binding site of HSP90, and lower toxicity [21]. This inhibitor attenuated fibroblast activation and, also, fibroblast to myofibroblast transformation [11]. 17-AAG and 17-DMAG modulate ARAF, AKT, CDK4, MET, and PDK1 affecting principally protein kinase activity, as 34% of kinases are reduced and only 6% of them are upregulated [22]. Another HSP90 inhibitor, 1G6-D7, attenuated the severity of the fibrotic process in a murine model of bleomycin-induced pulmonary fibrosis by downregulating the levels of HSP90 [23].

Table 1. HSP90 inhibitors in in vivo studies on Pulmonary Fibrosis. 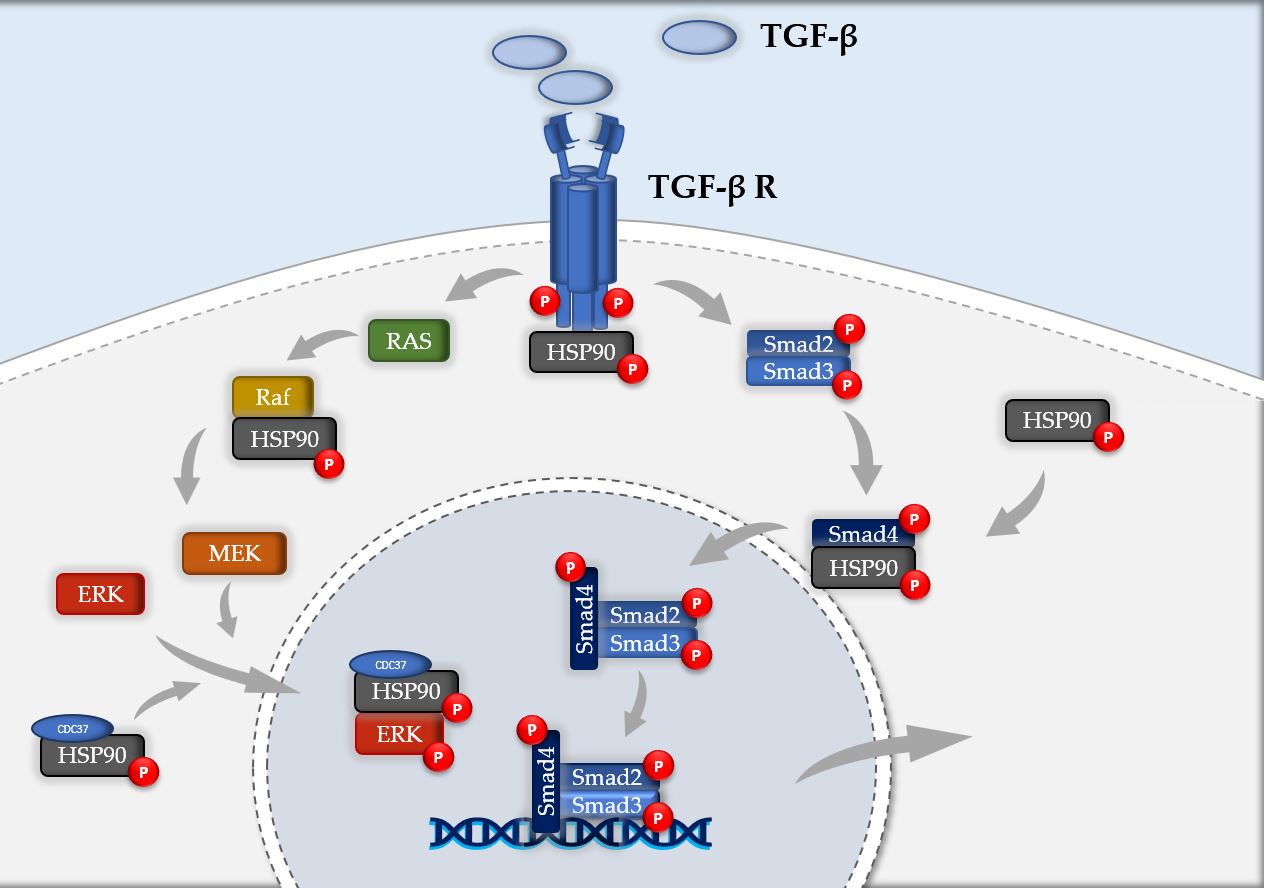 6. The need for new antifibrotic therapies in the era of SARS-CoV-2 Pandemic

Pirfenidone and Nintedanib are currently the only FDA approved drugs for IPF; their effect is limited to slowing disease progression [35] and, as of today, a cure is still missing. Furthermore, as several studies have reported increasing trends in mortality in IPF patients during the last years [36][37], the developing new therapeutical targets is still an unmet medical need. HSP90 inhibitors that are already in clinical trials for cancer, despite the promising results in animal models, require further experimentation for the definition of the optimal dosage and related safety in IPF.

Now more than ever, the development of new antifibrotic treatments, appears imperative because of the potential use in preventing the long-term complications from SARS-CoV-2 related disease (COVID-19). Indeed, COVID-19, similarly to ARDS, provokes long-lasting effects on the lung parenchyma and structure that can result in pleural thickening, atelectasis and pulmonary fibrosis [38][39], that, in patients with Middle-East Respiratory Syndrome (MERS), directly correlates with disease severity and Intensive Care Unit (ICU) length of stay [40]. It was recently proposed to initiate early antifibrotic therapies for COVID-19 patients with or without IPF [41]. Indeed, blocking TGF-β has been already suggested [42][43] since TGF-β is increased in lung sections of patients with COVID-19 [44]. Therefore, HSP90 inhibitors, capable of modulating the downstream cascades of TGF-β, have a strong translating potential for the treatment of COVID-19 patients; clearly, more preclinical and clinical studies are needed.

While few trials are under way to test the effectiveness of Pirfenidone and Nintedanib for the treatment of COVID-19 (NCT04282902, NCT04338802), even more need to focus on the development of new antifibrotic interventions with better efficacy.

In this Article Entry we briefly introduced the most significant results of HSP90 inhibition and modulation of the Proteome as potential therapies against the development of pulmonary fibrosis. We then translated their significance to the era of the SARS-CoV-2 pandemic.

More
© Text is available under the terms and conditions of the Creative Commons Attribution (CC BY) license; additional terms may apply. By using this site, you agree to the Terms and Conditions and Privacy Policy.
Upload a video for this entry
Information
Subjects: Biochemistry & Molecular Biology
Contributors MDPI registered users' name will be linked to their SciProfiles pages. To register with us, please refer to https://encyclopedia.pub/register :
Ruben Manuel Luciano Colunga Biancatelli
,
Pavel A. Solopov
,
John Catravas
View Times: 565
Revisions: 5 times (View History)
Update Time: 07 Aug 2020
Table of Contents
1000/1000
Hot Most Recent