Submitted Successfully!
Thank you for your contribution! You can also upload a video entry related to this topic through the link below:
https://encyclopedia.pub/user/video_add?id=15292
Check Note
2000/2000
L19-TNF
Edit
Upload a video
This entry is adapted from 10.3390/ijms221810020

Tumor necrosis factor (TNF) is used as a pro-inflammatory payload to trigger haemorrhagic necrosis and boost anti-cancer immunity at the tumor site. There is  a depotentiated version of TNF (carrying the single point mutation I97A), which displayed reduced binding affinity to its cognate receptor tumor necrosis factor receptor 1 (TNFR-1) and lower biocidal activity.

Cytokines are small proteins which modulate the activity of the immune system in health and in disease. Certain proinflammatory cytokines are used for cancer immunotherapy [1][2], while other cytokines with anti-inflammatory properties may be considered as tools for the treatment of chronic inflammatory and autoimmune conditions [3].Targeting an active cytokine to a tumor-associated antigen by means of a fusion with a suitable monoclonal antibody may represent a strategy for the enhancement of the cytokines’ therapeutic index [4][5].

Tumor necrosis factor (TNF) is a homotrimeric cytokine which shows direct cytotoxic activity on certain types of cancer cells [6], stimulates anti-tumor immunity [7][8], and may also be active on the tumor endothelium, leading to intravascular blood coagulation [9] or to haemorrhagic necrosis [10]. Recombinant human TNF (Beromun®) is an approved drug in Europe for the treatment of metastatic melanoma and soft tissue sarcoma in the setting of isolated limb perfusion. The systemic use of non-targeted TNF is limited by its narrow therapeutic index and high toxicity at very low doses [11]. Therefore, TNF has been used as an active payload for the generation of tumor-specific immunocytokines [12].
L19-TNF (Fibromun, Philogen S.p.A., Siena, Italy) is a fully-human immunomodulatory product consisting of a non-covalent homotrimeric immunocytokine featuring human TNF fused to the L19 antibody (specific to EDB of fibronectin, a marker of tumor neovasculature) [5]. L19-TNF has been systemically administered to patients with solid tumors [13], as well as in isolated limb perfusion procedures to patients with in-transit melanoma metastases [14].
Now, there is the generation of a depotentiated version of Fibromun product, capable of inducing potent in vivo anti-tumor activity with reduced systemic toxicity. The new molecule, named L19-TNFI97A, was selected among a series of candidates displaying single-point mutations of amino acid residues involved in surface interactions between TNF monomers. The substitution of isoleucine for alanine in position 95 of the human TNF, hence named L19-TNFI97A, showed decreased activity (~100-fold) when compared to wild type L19-TNF (L19-TNFWT), while its biological activity was restored upon binding to the target antigen EDB both in vitro and in vivo. Moreover, the binding affinity of L19-TNFI97A towards its cognate receptor, TNFR1, was decreased compared to the wild type molecule. Preclinical characterization of L19-TNFI97A in tumor-bearing

L19-TNF is a recombinant fusion protein composed by the fully human L19 antibody in scFv format conjugate to the human TNF by a (S4G)3 linker (Figure 1A) forming a natural homotrimer (Figure 1B). To identify products with promising features for subsequent in vivo investigations, 11 different mutant versions of L19-TNF were expressed in mammalian cells and purified by Protein A chromatography, as the VH domain of the L19 antibody is compatible with affinity capture modality [15]. Six of the eleven products exhibited favorable size exclusion and sodium dodecyl-sulfate polyacrylamide gel electrophoresis (SDS-PAGE) profiles (Figure 1C and Supplementary Information Figure S1). Deconvolution of the liquid chromatography-mass spectrometry (LC-MS) profile allowed identification of the expected experimental masses for all the targeted TNF-constructs which were compatible with the predicted values in the absence of any protein glycosylation. Sequences of the fusion proteins are listed in the Supplementary Information. 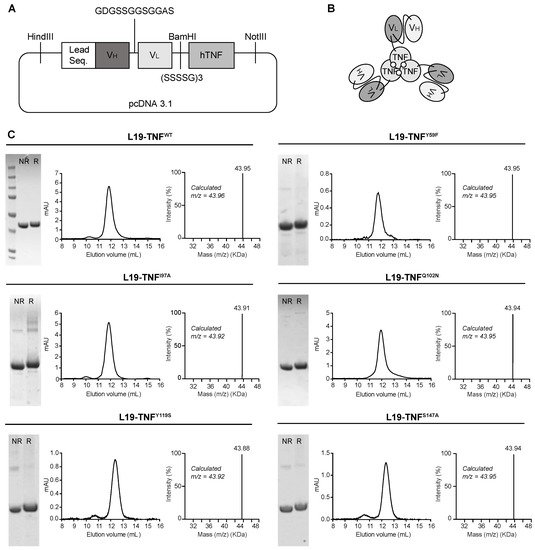 TNF is known to induce direct killing on several tumor cell lines [10]. To evaluate the biocidal activity of L19-TNF muteins upon antigen concentration, a panel of human tumor cell lines were analyzed for the EDB expression by immunofluorescence (Figure 2A). The antigen was not detectable in the human melanoma cell line A-375 and, therefore, the L19-TNF mutants were tested for their cytotoxic activity on these cells in the presence or absence of EDB coating (Figure 2B). Cell killing of L19-TNFWT and the majority of the mutants tested was not affected by the presence of EDB. However, in the absence of EDB, the mutein carrying the single substitution of the isoleucine at position 97 by alanine (hence named L19-TNFI97A) showed 10 times less potency compared to the wild type version. This effect was re-established upon EDB presence (Figure 2C). EC50 values for all the tested proteins are reported in Table 1 and Supplementary Information Table S4.

4. The Mutant I97A Has Reduced Binding Affinity towards TNFR1

Affinity of L19-TNFWT and of L19-TNFI97A was analyzed by Surface Plasmon Resonance. The proteins were reversibly coated on independent EDB-precoated chips. TNFR1 was injected at different concentrations and SPR response was measured (Figure 3A). L19-TNFWT showed a fast kon and very slow koff towards TNFR1 (experimental calculated KD = 10 nM) and the binding kinetics of the mutant L19-TNFQ102N (selected as a mutant with similar in vitro activity to the wild type protein) were comparable (Figure 3B,D). By contrast, the L19-TNFI97A mutant was still a stable homotrimer in gel filtration analysis but exhibited a faster dissociation from the receptor, indicative of a depotentiation of TNFR1 binding (Figure 3C). Fitting and calculated binding constants are depicted in the Supplementary Information Tables S5 and S6. 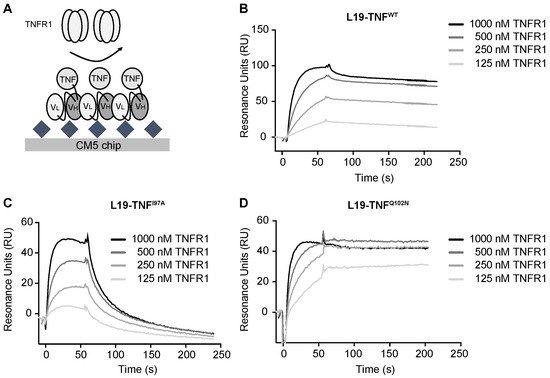 Figure 3. Real time binding analysis of TNFR1 on immobilized L19-TNF muteins. (A) Schematic representation of affinity measurement methodology. EDB was covalently immobilized on the chip, while different L19-TNF muteins were coated on the solid surface thanks to non-covalent L19-EDB interaction. TNFR1 was sequentially injected at different concentrations (starting concentration of 1000 nM, followed by 1:2 dilution series). SPR sensorgrams of (B) L19-TNFWT, (C) L19-TNFQ102N and (D) L19-TNFI97A are presented.

5. The I97A Mutant Accumulates at the Tumor Site and Shows High Levels in Blood

In order to test immunoreactivity of the L19 antibody function and EDB in L19-TNFI97A, immunofluorescence staining was performed on non-treated WEHI-164 tumor cryosections. L19-TNFWT and L19-TNFI97A were both able to bind to EDB present in tumor specimens (Figure 4A). The tumor-targeting performance of L19-TNFI97A was evaluated in immunocompetent BALB/c mice bearing subcutaneously-grafted WEHI-164 tumors. The protein was radiolabeled with 125I and injected intravenously at the recommended dose of 250 µg/Kg. The mutein preferentially localized at the site of the disease, with a high tumor uptake value and excellent tumor-to-normal organs ratio (average tumor-to-organs ratio 5.5:1). Surprisingly, high levels of the mutant were found in blood 24 h post-administration (average tumor-to-blood ratio of 2-to-1) (Figure 4B). 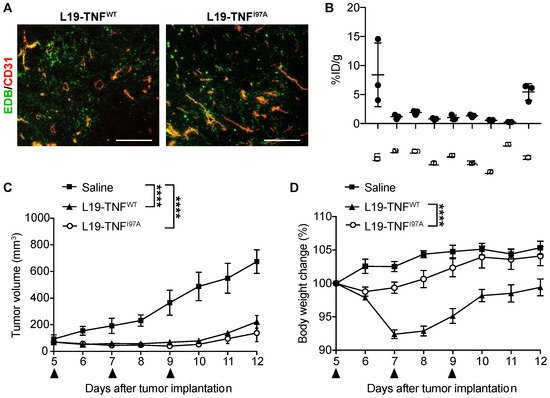