Submitted Successfully!
Thank you for your contribution! You can also upload a video entry related to this topic through the link below:
https://encyclopedia.pub/user/video_add?id=15213
Check Note
2000/2000
Digital Rights
Edit
Upload a video
This entry is adapted from 10.3390/su132011438

Digital rights are fundamental rights in the digital age related to privacy protection in smart cities. In this vein, it has encouraged the United Nations to take an advocacy role regarding the ‘right to have digital rights’ and create the Hub for Human Rights and Digital Technology: ‘Together, as we seek to recover from the pandemic, we must learn to better curtail harmful use of digital technology and better unleash its power as a democratising force and an enabler’.

1. Introduction: ‘The Right to Have Digital Rights’

COVID-19 has hit citizens dramatically, not only creating a general risk-driven environment encompassing a wide array of economic vulnerabilities but also exposing people to pervasive digital risks, such as biosurveillance, misinformation, and e-democracy algorithmic threats [1][2][3]. Furthermore, it has inevitably raised the need to resiliently and techno-politically respond to threats that hyper-connected and highly viralised societies produce [4]. Consequently, over the course of the pandemic, a debate has emerged in several global People-Centered Smart Cities [5][6][7][8][9] regarding the appropriate techno-political response when governments use disease surveillance technologies to tackle the spread of COVID-19 [10][11][12][13][14][15], pointing out the dichotomy between state-Leviathan cybercontrol and civil liberties [16][17][18].
In many ways, the pandemic, has unprecedentedly brought into sharp relief digital rights issues on which several agents had been working for years in cities worldwide [5][19][20][21]. Thus, the digital rights’ claim could be directly seen as a social innovation that is evolving towards an institutional innovation [22][23][24]. The digital rights’ claim, articulated via city networks, is currently offering new modes of urban governance for policy experimentation in city administrations worldwide [6][7][8][25]. As such, these kinds of digital rights-driven projects based on policy experimentations attempt to subvert the ongoing urban politics and governmentality that lack sustainability, with traditional siloed city administrations remaining a central obstacle to sustainable urban development and people-centered smart cities [26].
In 1949, Hannah Arendt [27] wrote a phrase that has gradually become one of her most quoted and often interpreted: ‘the right to have rights.’ The phrase summed up her scepticism about the concept of human rights—those rights that, in theory, belong to every person by virtue of existence [28][27][29][30][31][32]. According to Arendt, the only way for these rights to be guaranteed was being not only a person but also a citizen [33]. This quotation may resemble the current post-COVID-19 algorithmic times, when, in the age of digitisation and datafication, dealing responsibly with citizens’ rights and data poses a dilemma: on the one hand, there is the tangible added value of processing citizens’ personal data by private sector organisations, but on the other hand, there is the claim that individuals should retain control over these data and consequently derived civilian rights [34][35][36][37][38]. Amid surveillance capitalism and beyond a human rights-based approach of Artificial Intelligence (AI) governance [39][40], state-based dataveillance mechanisms like biometrics [41], vaccine passports [42][43][44][45], biobanks, and the Internet within the context of citizenship inevitably force us to reclaim ‘the right to have digital rights’ [45][46][47][48][49].
Calls for the protection of citizens’ digital rights have resulted in countless reports, manifestos, organisations, projects, and political declarations in different regional, national, supranational, and global contexts [5][19][50][51][52][53]. Citizens have traditionally reasserted their positions in relation to the state by claiming human and civil rights and making rights claims. However, the triangle between the state, the market, and the citizenry requires careful balance to protect civic digital rights and liberties and to enable participation and active citizenship [54][55].
The globally widespread phenomenon of the algorithmic disruption has led to new consequences—such as hyper-targeting through data analytics, facial recognition, and individual profiling—received by many as threats and resulting in not-so-desirable outcomes, such as massive manipulation and control via a surveillance capitalism push in the United States (US) [56][57] and the ‘Social Credit System’ in China [58][59][60]. In contrast, these techno-political concerns raised a debate in Europe that crystallised into the General Data Protection Regulation (GDPR), which came into force in May 2018. The emergence of the algorithmic disruption has spurred a call to action for cities in the European Union (EU), establishing the need to map out the techno-political debate on ‘datafication’ or ‘dataism’ [1][61][62]. Moreover, the disruption has also highlighted the potential requirements for establishing regulatory frameworks to protect digital rights from social innovation and institutional innovation. Such policy experimentation frameworks for urban governance cover demands for privacy, ownership [63], trust, access, ethics, AI transparency [64], algorithmic automatisation [65], and, ultimately, democratic accountability [66].
Alongside the algorithmic disruptive phenomena, data technologies alter not only the corpus of citizens’ rights but also the way in which cities conceive and deliver public policy and services to protect these rights [67]. This digital transformation pervasively encompasses all angles of policy experimentation in city administrations: the provision of services, the assignment of resources, the approach to solving social problems, and even the complex decision-making process are increasingly shifting to software algorithms and evolving toward considering citizens as merely data-providers rather than decision-makers [63][68]. This transformational process, stemming from a ‘black-boxed’ algorithmic momentum, is often perceived as a mechanism that increases the efficiency of existing approaches or as simply a process of policy adjustment [69]. However, further policy experimentation and advocacy stemming from social innovation and institutional innovation seem to be necessary in light of the current demands from city administrations worldwide (Figure 1). 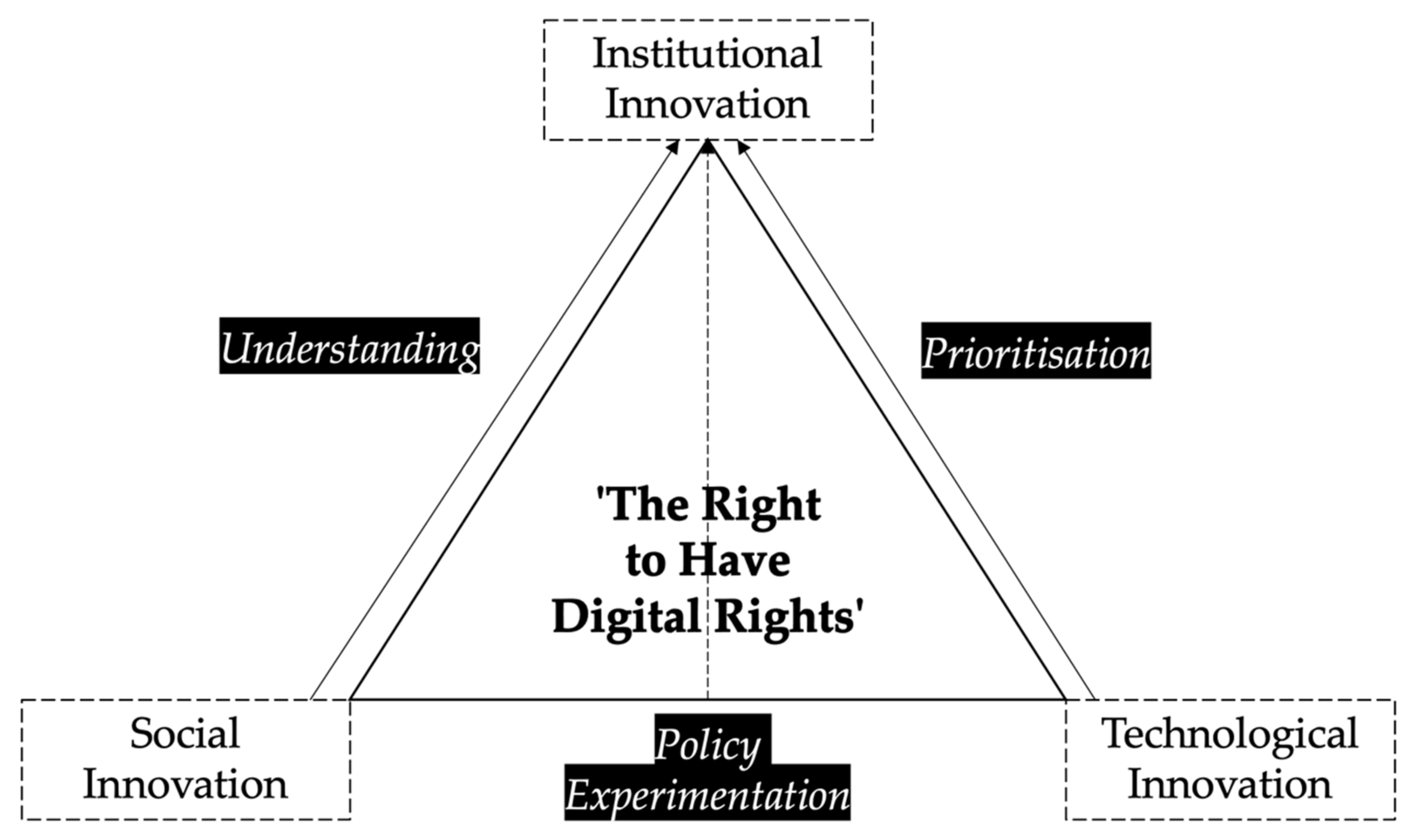 2. The Right to Have Digital Rights in Smart Cities