Submitted Successfully!
Thank you for your contribution! You can also upload a video entry related to this topic through the link below:
https://encyclopedia.pub/user/video_add?id=15165
Check Note
2000/2000
Field Management on Soil and Tea Root Microbiomes
Edit
This entry is adapted from 10.3390/applmicrobiol1020025

Microorganisms in soils and plants affect soil physical and chemical characteristics, affect soil nutrient availability and distribution and are crucial for soil and plant health, aiding in resilience to environmental stresses.

Conventional cropping systems, which rely heavily on chemical fertilizers and control agents, have been utilized for decades, leading to a doubling of crop production and increasing food demand among the global population [1]. However, this agricultural practice has many negative effects on ecological diversity, soil structure and human health [1][2][3]. In contrast, organic cropping systems, which have been practiced for thousands of years, conserve natural sources and maintain environmental health by using organic materials and low intensive tillage, making agriculture sustainable [3]. Field management makes a significant difference and has a great impact on biological diversity, including microorganism community structures and compositions.
Previous reports have shown the effects of agricultural practices on soil and rhizosphere microbiomes. For example, soil bacterial richness and diversity was significantly increased in organic farms, compared to conventional farms [4]. Zhang et al. [5] found that the abundance of bacteria which obtain acid phosphatase activity was altered in rice when the irrigation regimes were changed. In semiarid vineyards, cover crop management not only increased soil organic carbon but also enhanced bacterial diversity compared to conventional tillage. In contrast, fungal diversity was higher under conventional tillage than under cover crop management [6]. In addition, evidence also suggested that soil fungal communities are more sensitive to crop rotation and cropping systems than bacterial communities are [7][8]. There are also reports that show the effects of field management on root endophytic bacterial microbiomes [9][10]. However, there are only a few reports that examine the impacts of field management on both soils and root microbiomes. Hartman et al. [11] reported that field management is a crucial factor in determining soil fungal structure, but in root endosphere it is the main driving force for bacteria rather than fungi. The responses of bacterial and fungal communities to agricultural practices vary based on environmental conditions and crop species, suggesting that more investigation is required to elucidate the effects of agriculture practices on soil, rhizosphere and endosphere microbiomes.
Tea (Camellia sinensis L.) is one of the most important economic crops in the world. It is a perennial crop that is grown for the harvesting of young leaves. Thus, nutrient replenishment, especially nitrogen, is crucial for tea production. However, the long-term application of chemicals is harmful to soil health and the ecosystem at large. Several studies showed that applying organic fertilizers to tea farms increases soil pH, organic carbon and total N content [12][13]. The width and length of tea leaves are also greater under organic farming systems, although yield might be reduced compared to conventional farming systems [12][14]. Moreover, leaves harvested on organic farms also enhance tea’s antioxidant properties [14][15][16]. In addition, Qiu et al. [17] examined soil microbial diversity through temperature gradient gel electrophoresis and found a lower Shannon index when applying chemical fertilizers instead of organic manure, suggesting that field management affects microbial biodiversity in tea farms. However, little is known about the microbial community structures and species that are sensitive to field management in the tea farms.

2. Identification of OTUs That Are Sensitive to Field Management and Growth Environments

The distinction of bacterial community composition among samples was demonstrated by PERMANOVA and PCoA. Next, we performed the LEfSe procedure to display how taxonomic abundance was affected by field management strategy. At all the levels, samples derived from organic farms were relatively abundant compared to those from conventional farms. One phylum (Latescibacterota), four classes, six orders and six families (LDA score > 4) were enriched in the samples from organic farms. In contrast, only one class, one order and one family were enriched in the samples from conventional farms (Figure S4).
We further identified the OTUs that were sensitive to field management strategies by performing an indicator species analysis. Among OTUs identified in the pool of soil bacteria, 11 and 26 OTUs were potential indicator species of conventional and organic farms, respectively, and five OTUs were co-occurred in both types of cropping systems, meaning that they might have been indicators of soil bacteria. Among root endophytic OTUs, 21 and 16 OTUs were identified as indicator species of root endophytes under conventional and organic cropping systems, respectively, and only two OTUs, assigned to Phenylobacterium and Thermosporothrix, were co-occurred under both cropping systems; these are the bioindicators of root bacteria. Interestingly, four OTUs were co-occurred in the roots and soils derived from conventional farms, while only one OUT, assigned to Sphingomonas, was co-occurred in the soil and root samples from organic farms, suggesting that these OTUs might be the indicator species of cropping systems in either soils or roots (Figure 1; Table S2). In summary, we identified the indicator species of different sample types under different cropping systems. Further validation will be required to establish a strong association between bacterial groups and field management. 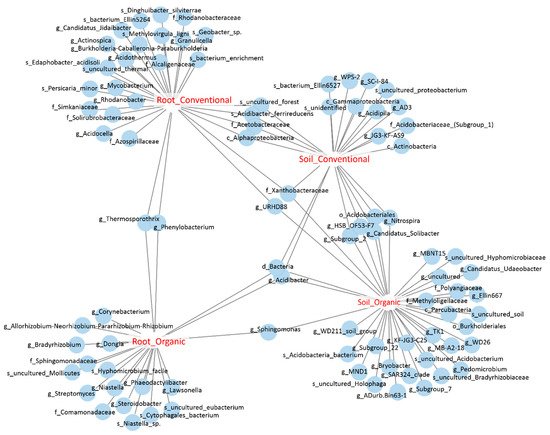 Figure 1. The bipartite network shows soil and root OTUs that were sensitive to cropping systems. Each circle represents an individual OTU that was significantly associated with the corresponding sample groups (p < 0.05).