Submitted Successfully!
Thank you for your contribution! You can also upload a video entry related to this topic through the link below:
https://encyclopedia.pub/user/video_add?id=15099
Check Note
2000/2000
Oxidative Quality of Dairy Powders
Edit
This entry is adapted from 10.3390/foods10102315

Lipid oxidation (LO) is a primary cause of quality deterioration in fat-containing dairy powders and is often used as an estimation of a products shelf-life and consumer acceptability. The LO process produces numerous volatile organic compounds (VOC) including aldehydes, ketones and alcohols, which are known to contribute to the development of off-flavours in dairy powders. The main factors influencing the oxidative state of dairy powders and the various analytical techniques used to detect VOC as indicators of LO in dairy powders are outlined.

Oxidation of bovine milk fat is recognised as the main factor in the development of undesirable flavours in products such as whole milk powder (WMP) and infant milk formula (IMF). Lipid oxidation (LO) is responsible for the formation of primary and secondary oxidation products including aldehydes, ketones and alcohols, which can impact on nutritional and sensory properties of dairy powders [1]. Factors that can contribute to the oxidative stability of dairy powders include the quality of the raw milk (fatty acid (FA) composition, bovine diet, and storage conditions), processing parameters, powder composition (especially water activity), presence of pro- and anti-oxidants (natural or added during processing), packaging materials, storage and transport conditions. LO is a free radical chain reaction consisting of three stages; initiation, propagation, and termination. Free radicals and peroxides (tasteless, flavourless compounds) [2] are generated during the initiation phase when molecular oxygen reacts with unsaturated FA [3]. The rate of the propagation cycle is directly proportional to the degree of lipid unsaturation [4]. The resultant termination products (secondary LO products) are generally quite stable, however, it is these secondary LO products (mainly aldehydes, ketones, alcohols, and hydrocarbons) that actually contribute to off-flavour development and have been described as grassy, soapy, cardboard-like, painty, tallowy and/or fishy [5][6]. Secondary LO compounds can be monitored and quantified instrumentally as molecular-level indicators of oxidised flavours in dairy products. This measurement can be used in place or in combination with sensory analysis to provide an overall profile of the flavour stability of a dairy powder [6][7]. The presence and increase of numerous secondary LO products in dairy powders during processing and storage is well documented [6][8][9]. However, there is a lack of knowledge linking the quantification of volatiles associated with LO to descriptive sensory attributes in dairy products in general [10]. The aims of this review are as follows: (1) to summarize the main factors influencing the oxidation of dairy powders, (2) to summarise the various analytical techniques used to detect and quantify VOC as indicators of LO, and (3) to highlight the use of combined analytical and sensory approaches to better understand the LO process in dairy powders.

It is generally accepted that oxygen reacts naturally with many organic substrates resulting in the formation of primary oxidation products; hydroperoxides and other oxygenated compounds. There are three known types of LO that can affect dairy products; auto-oxidation, photo-oxidation, and metal induced oxidation [11].

The mechanism of the auto-oxidation of PUFA as a radical chain reaction was established more than half a century ago. The process of LO can be broken into three distinct, but partially overlapping phases of radical reactions; initiation, propagation and termination [12] ( Figure 1 , Figure 2 and Figure 3 ). Free radicals and peroxides, both of which are highly reactive, are generated during the initiation phase when molecular oxygen reacts with unsaturated FA. In addition to oxygen, oxidative initiators such as chemical oxidisers, transition metals (e.g., copper and iron), and enzymes (e.g., lipoxygenases) contribute to the rate of the initiation phase [3]. Heat and light also exacerbate the rate of the initiation phase and the other phases of LO [13]. The rate of auto-oxidation is increased by increasing unsaturation of the alkyl chain [13], and the matrix also plays a role in the susceptibility of a product to oxidation [14]. FA alkyl chains are susceptible to oxidation at alkene bonds and neighbouring allylic carbons. 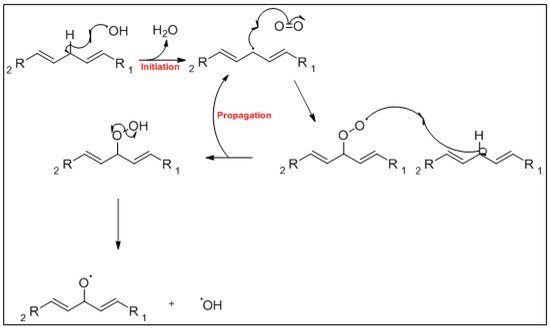 Figure 1. The mechanism of the first two phases of the lipid oxidation process; initiation and propagation.

Figure 2. The mechanism of conjugation of the lipid oxidation process. 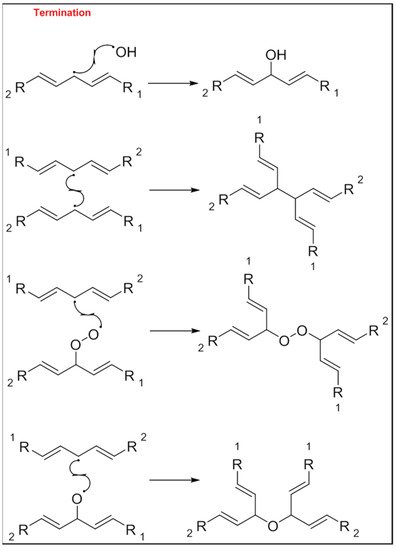 Photo-oxidation and free-radical reactions at allylic carbons are responsible for the breakdown of unsaturated lipids [12][13][15]. These reactions produce hydroperoxides in these allylic bonds, and cause changes in the position and geometry of double bonds. Auto-oxidation and photo-oxidation are associated with different hydroperoxide reaction products, indicating that different reaction mechanisms are involved [16]. Photo-oxidation of milk has been well documented [11][17], exposure to light, either natural or artificial, can cause development of off-flavours in milk within 15 min [18]. The subsequent aromas have been characterised as burnt protein, cabbage-like and plastic [11], however, their intensity can decrease the longer the milk is exposed to light, allowing newly activated off-flavours to dominate. These off-flavours have been described as cardboard-like, metallic and rancid [19][20][21]. Exposure to ultra-violet (UV) light can enable the oxidation of fat to volatile aldehyde compounds and has also been found to cause the degradation of sulfur–containing compounds, both of which are major contributors to off-flavours in milk [18]. A study by Silcock et al. [22] reported good correlation between negative sensory perceptions and VOC formation for milk stored in light-exposed containers, these include photo-oxidation and auto-oxidation compounds such as dimethyl disulfide, and aldehydes such as heptanal, pentanal and hexanal. For milk stored in containers protected from light, no correlation between the sensory attributes and VOC was documented.

Furthermore, the type of light the product is exposed too can also have an impact on the levels of oxidation. A study by Brothersen et al. [18] demonstrated that exposure of milk to fluorescent light (commonly used in the retail of dairy products) resulted in greater changes in LO levels, compared with exposure to white light-emitting diodes (LED). This study demonstrated that even high quality milk is susceptible to photo-oxidation at the point of sale dependent upon the type of lighting.

Various FA within milk are broken down via oxidation to primary and secondary oxidation products. The formation of a hydroxyperoxide through the oxidative mechanisms discussed earlier, breaks down to form an alkoxyl radical which splits by homolytic β-scission each side of the carbon bonded to the oxygen radical. The major FA in milk and some of their associated breakdown products are outlined in Figure 4 a–e. 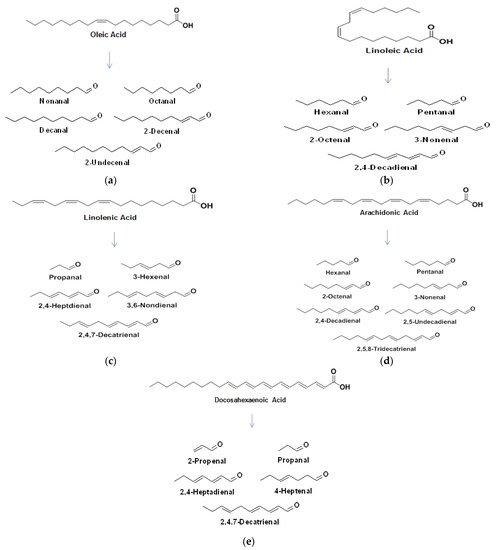 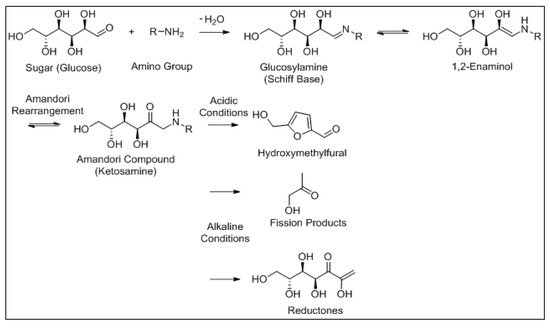 Figure 5. Schematic of the Maillard reaction of glucose with a generic amino group RNH2. The carbonyl functional group on the sugar undergoes a substitution reaction with the amino group of a protein or amino acid to form an N-substituted glycosylamine. This undergoes isomerisation by undergoing an Amandori rearrangement forming a ketosamine. This can undergo a number of reactions to produce a range of compounds which can undergo further reactions.

Similar to the Maillard reaction, the Strecker reaction mechanism is also linked to LO. Aldehydes are readily converted to secondary alcohols or acids and are therefore known as transitory volatile compounds with some known to be a result of Strecker reactions [29][30]. The degradation of amino acids during the Strecker reaction is one of the primary mechanisms resulting in the final aroma compounds of the Maillard reaction. The process involves the oxidative deamination and decarboxylation of the amino acid in the presence of α-dicarbonyl compounds formed in the Maillard reaction and the formation of the corresponding Strecker aldehyde [31][32]. Each amino acid produces a specific Strecker aldehyde which comprises one carbon atom less than the amino acid from which it is formed. Strecker aldehydes such as 3-methylbutanal (malty flavour) [33] and phenylacetaldehyde (honey-like flavour) are derived from leucine and phenylalanine, respectively, and are commonly reported as aroma contributors in dairy products [34]. LO and Maillard reactions interact in complex food systems and can share common chemical mechanisms and intermediate compounds [23]. Moreover, certain carbonyls derived from LO such as alkadienals and ketodienes have been shown to promote the oxidative degradation of amino acids to produce the corresponding Strecker aldehydes via Strecker-type reactions [35][36]. The Strecker reaction is outlined in Figure 7 .

There are various techniques and strategies used to measure LO in dairy products. Some commonly used, relatively simple, and practical methods to assess LO are POV, TBARS, and the KREIS test. Their widespread use is mainly due to ease of use and low cost, although they are more qualitative rather than quantitative.

Several analytical methods have been optimised for detecting off-flavours associated with LO in dairy products, such as solvent-assisted flavour evaporation (SAFE), GC-MS [37], and GC-O [38]. GC-flame ionization detection (FID) or GC-MS have become the methods of choice for quantitative VOC analysis. These approaches are undertaken in combination with a specific method to extract and concentrate the VOC using either static or dynamic headspace techniques, sorption-based techniques, liquid based extraction or solvent assisted techniques. As previously mentioned, care must be taken not to increase VOC associated with LO during the analytical technique, as previous studies have demonstrated that certain LO VOC can increase between 37 °C and 60 °C [39], therefore, including appropriate controls is necessary to prevent false positives.

TD also works on the bases of heating samples to allow VOC reach the gaseous phase. As with HS-SPME, TD is used as an extraction and pre-concentration step prior to analysis by GC. VOC and some semi-VOC are extracted by this technique onto suitable phases packed into TD tubes, with many different phases available that can target individual VOC or chemical classes, or for more generic untargeted approaches. Removal of the trapped compounds from the phase(s) onto the GC column involves heating of the TD tube in a gas flow, and sometimes further concentration is possible using an in-line focusing trap. TD has been applied to a number of dairy products [40][41], milk powder [42], and IMF [43]. A number of application notes are also available on the use of TD [44][45][46]. Its widespread use in dairy products may be limited as moisture management can be problematic.

Faulkner et al. [40] achieved good results for milk samples (up to 65 volatile compounds from a range of chemical classes) using a new high capacity SE technique called HiSorb followed by GC-MS analysis. Currently PDMS-coated stir-bars are the only phase commercially available for these techniques, which somewhat reduces the applicability of SBSE to the extraction of non-polar compounds due to the poor extractability of more polar analytes [47]. However, Ochiai et al. [48] demonstrated that solvent-assisted SBSE improves peak resolution and extraction efficiency of polar and non-polar compounds. Moreover, Schiano et al. [49] concluded that solvent-assisted SBSE provided the most consistent detection of selected compounds in commercial milks, although the levels of compounds detected were not significantly ( p > 0.05) higher compared to conventional SBSE or SPME extraction methods. Some of the most common techniques used for the extraction of volatiles from dairy powders are outlined in Table 1 .

Table 1. Summary of the primary methodologies used for volatile extraction and analysis of dairy powders.

More
© Text is available under the terms and conditions of the Creative Commons Attribution (CC BY) license (http://creativecommons.org/licenses/by/4.0/)
Upload a video for this entry
Information
Subjects: Biochemical Research Methods
Contributor MDPI registered users' name will be linked to their SciProfiles pages. To register with us, please refer to https://encyclopedia.pub/register :
Holly Clarke
View Times: 47
Revisions: 2 times (View History)
Update Time: 19 Oct 2021
Table of Contents
1000/1000
Hot Most Recent