Submitted Successfully!
Thank you for your contribution! You can also upload a video entry related to this topic through the link below:
https://encyclopedia.pub/user/video_add?id=1509
Check Note
2000/2000
Gastrointestinal Diseases in Primary Immunodeficiencies
Edit
Upload a video
This entry is adapted from 10.3390/ijms21155223

In recent years, the incidence of immune-mediated gastrointestinal disorders, including celiac disease (CeD) and inflammatory bowel disease (IBD), is increasingly growing worldwide. It is well established that primary immunodeficiencies (PIDs) exhibit gastrointestinal manifestations and mimic other diseases, including CeD and IBD. The most common PIDs in adults are the selective immunoglobulin A deficiency (SIgAD) and the common variable immunodeficiency (CVID). However, some differences concerning diagnostics and management between enteropathy/colitis in PIDs, as compared to idiopathic forms of CeD/IBD, have been described. There is an ongoing discussion whether CeD and IBD in CVID patients should be considered a true CeD and IBD or just CeD-like and IBD-like diseases. This review addresses the current state of the art of the most common primary immunodeficiencies in adults and co-occurring CeD and IBD.

Autoimmune diseases of the gastrointestinal (GI) tract are increasingly growing worldwide over the last decades. They concern both inflammatory bowel disease (IBD) and celiac disease (CeD) [1][2]. The increasing body of evidence that primary immunodeficiency (PID) can complicate diagnostics of CeD [3] and mimic IBD [4] implicates the need for a comprehensive review of this topic, especially when several studies have shown that autoimmune manifestations are the second most common manifestation of PIDs after infections [5][6].

PIDs are often considered pediatric ailments, whereas between 25 and 45% of PIDs are diagnosed in adults. Among all PIDs, more than 50% make up abnormalities in humoral immunity [7], making immunoglobulin deficiency the most common PID in children and also among adults. In the latter group, selective immunoglobulin A deficiency (SIgAD) and common variable immunodeficiency (CVID) are the most common diagnoses [8].

Here we aim to present the up-to-date knowledge on the incidence, pathophysiology, symptoms, diagnostics, and management of autoimmune GI diseases, specifically CeD and IBD, in patients with underlying SIgAD or CVID. Moreover, this review is focused on differences between the classic forms of the above-mentioned diseases and those observed in patients with compromised humoral immunity, to estimate whether we are facing a spectrum of one disease or different diseases characterized by a similar clinical manifestation.

Various sources seem to agree on the occurrence of SIgAD among CeD patients, which is approximately 2–3%. Such a value is provided by the ESsCD guidelines for 2020 and is based on a large European cohort study by McGowan et al. [9][10]. The prevalence of CeD in individuals with SIgAD varies depending on author (6.7-30%) [10][11][12][13][14]. Most authors agree that the prevalence of CeD in patients with SIgAD is higher than in the general population; however, this requires further investigation.

The basic principles of CeD diagnostics in SIgAD patients are similar to those applied to IgA-sufficient individuals. The most important difference concerns serological diagnostics. In immunocompetent patients, first-line testing comprises of measurement of the anti-TG2 IgA level in serum [9]. This approach is not effective in SIgAD patients, as false negative results might be obtained; thus, patients with SIgAD may elude CeD diagnosis [15][16][17]. To avoid such a situation, ESsCD recommended assessing total IgA levels concurrently with serology testing to determine whether IgA levels are sufficient [9]. In the case of a lowered IgA serum level, IgG anti-TG2 and IgG-DGP are regarded as the best tool for identifying CeD in patients [9][18]. The next step in CeD diagnostics, after serological examination, is a small intestinal biopsy and histological assessment of the taken specimens. Histopathology findings in SIgAD patients with CeD do not vary much from those of patients with CeD alone [19][20]. It is indistinguishable from the pathology seen in non-SIgAD patients with CeD in terms of increased numbers of intraepithelial lymphocytes, villous atrophy, crypt hyperplasia, and infiltration of the lamina propria with lymphoid cells. The main difference concerns IgA-secreting plasma cells, which are absent in CeD patients with coexisting SIgAD [21][22][23]. Symptoms of CeD in IgA-deficient patients do not vary from those in patients with CeD alone [4]. SIgAD patients with CeD are responsive to gluten withdrawal and a gluten-free diet (GFD) is recommended [24][25][26][27].

The prevalence of enteropathy in CVID patients varies depending on the author (10 up to 60%) [28][29][30]. These values concern the incidence of non-infectious enteropathy, which is not synonymous with CeD. The true prevalence of the latter is very difficult to estimate, as it is not fully established whether we are facing CeD or only celiac-like enteropathy in CVID patients. Regardless of the way we classify this entity, CeD-resembling findings, including villus atrophy and increased intraepithelial lymphocytes, are common among CVID patients (8-50%) [31][32][33][34][35].

Enteropathy accompanied by malabsorption is a common clinical presentation of CVID; however, villus atrophy remains a challenging finding in this group. Serological diagnostics is insufficient in individuals with CVID [26][36].  In the vast majority of cases, CVID enteropathy differs from CeD not only the results of the serological assays, so it is debated whether it can be classified as true CeD or rather should be called celiac like [32]. Histological assessment of a duodenal biopsy shows a paucity or absence of plasma cells [25]. Besides, villous atrophy is usually less severe and the IEL count is often lower than in CeD, excessive neutrophil infiltration can be observed, as well as graft versus host-like lesions or follicular lymphoid hyperplasia [28][32]. ESsCD guidelines from 2019 say directly that an absence of plasma cells suggests CVID [9]. It is suggested that the only criterion to confirm CeD diagnosis in CVID patients is the histological response to a GFD [37][38]. Other researchers highlighted the importance of HLA determination, as the presence of the DQ2 or DQ8 haplotype can be associated with concomitant CeD, thus allowing the identification of CVID patients at risk [35]. Furthermore, if both HLA-DQ2 and HLA-DQ8 are negative, the diagnosis of CeD is highly unlikely [9]. There is no doubt that true CeD can be diagnosed in CVID patients, but yet according to current knowledge, this relationship is rare. In the vast literature research, we found no data on differences between symptoms of CVID enteropathy and symptoms of CeD, which led us to the conclusion that manifestations of these entities are indistinguishable based on clinical signs.

Approximately 50% of patients do not respond to GFD [39]. Some sources indicate that this percentage might be even up to 80% [28]. GFD is recommended only in HLA-DQ2 or HLA-DQ8 carriers as an attempt of a 6- to 12-month trial with follow-up histologic assessment [6][28][32]. Patients without HLA-DQ2 or HLA-DQ8 or unresponsive to GFD should be treated as a distinct disorder. In this case, short-term steroids or immunomodulators, including azathioprine and 6-mercaptopurine, can be used [25]. There is also evidence for the efficacy of an elemental diet, while in the case of severe malabsorption, limited use of total parenteral nutrition might be required [11][25].

A graphical summary concerning CeD in the discussed PIDs is presented in Figure 1.

To date, the literature indicates no significant differences between IBD in SIgAD and only IBD in terms of histological features, symptoms, and treatment. Histological findings in coexistent SIgAD and UC or CD are consistent with those concerning UC or CD separately [6][42].

Enteropathy is a common manifestation of CVID [28]. It is difficult to determine the actual prevalence of IBD among CVID patients. Not many studies on this topic are available and authors usually limit themselves to stating that concomitant CVID and IBD occurrence exceeds this in the general population. In many reviews, the prevalence of 2–13% of IBD among CVID patients repeats [34][43][44]. Most authors agree on that the clinical signs in IBD or IBD-like within CVID patients show no significant differences with those without CVID and include weight loss, chronic diarrhoea, rectal bleeding, abdominal pain, and malabsorption [4][25][26][45]. The main difference concerns the possibility of co-occurring severe infections in immunocompromised patients [46]. Histopathology assessment of colon specimens from CVID patients shows endoscopic and histopathological features that overlap considerably with CD or UC [26][34][47][48]. One difference that can help distinguish idiopathic IBD from CVID enteropathy/colitis remains the paucity of plasma cells in their biopsy (observed in 68% of the patients) [34][49]. Many authors are in favour of the theory that CVID enteropathy/colitis is a distinct independent disorder, separate from classic IBD, as there is an aforementioned lack of plasma cells in the mucosa [50][51][52]. This approach highlights that CVID can mimic lymphocytic colitis, collagenous colitis, and colitis associated with graft-versus-host disease [53][54][55]. All the above-described observations suggest that some cases of gut inflammation in CVID patients can be diagnosed as true IBD, while others should be referred to as IBD-like. There is an ongoing discussion on this topic and no consensus has been reached yet.

The clinical approach in managing IBD in primary antibody deficiencies remains a challenge. Regardless of the doubts of whether IBD in CVID should be referred to as IBD, or rather IBD-like disease, or CVID enteropathy/colitis, most authors recommend using therapy schemes for IBD, with increased caution concerning immunosuppressive drugs [4][56]. However, there is little data about the therapeutical approach in this case. Gut inflammation in CVID is usually difficult to control and often resistant to standard IBD therapy  [56][57]. Treatment of non-infectious GI disease in CVID includes corticosteroids, elimination of bacterial overgrowth with antibiotics, 5-aminosalicylic acid, 6-mercaptopurine, and azathioprine [56][58][59]. Besides, several groups reported substantial efficacy of targeted biological therapies, including anti-TNF-α drugs (infliximab and adalimumab), and the anti-IL−12/IL−23 monoclonal antibody ustekinumab [49][60][61][62][63][64][65]. Vedolizumab, an inhibitor of α4β7integrin, was also used in CVID-enteropathy, although with different results [28][66]. Furthermore, CVID patients with substantial T-cell defects require careful monitoring for fungal infections when on biological treatment. Immunoglobulin replacement therapy lowers the frequency of recurrent or severe infections and reduces the rate of hospitalization, but it was found to be ineffective in IBD-like disease in CVID [29][32][44].

A graphical summary concerning IBD and CVID is presented in Figure 2. 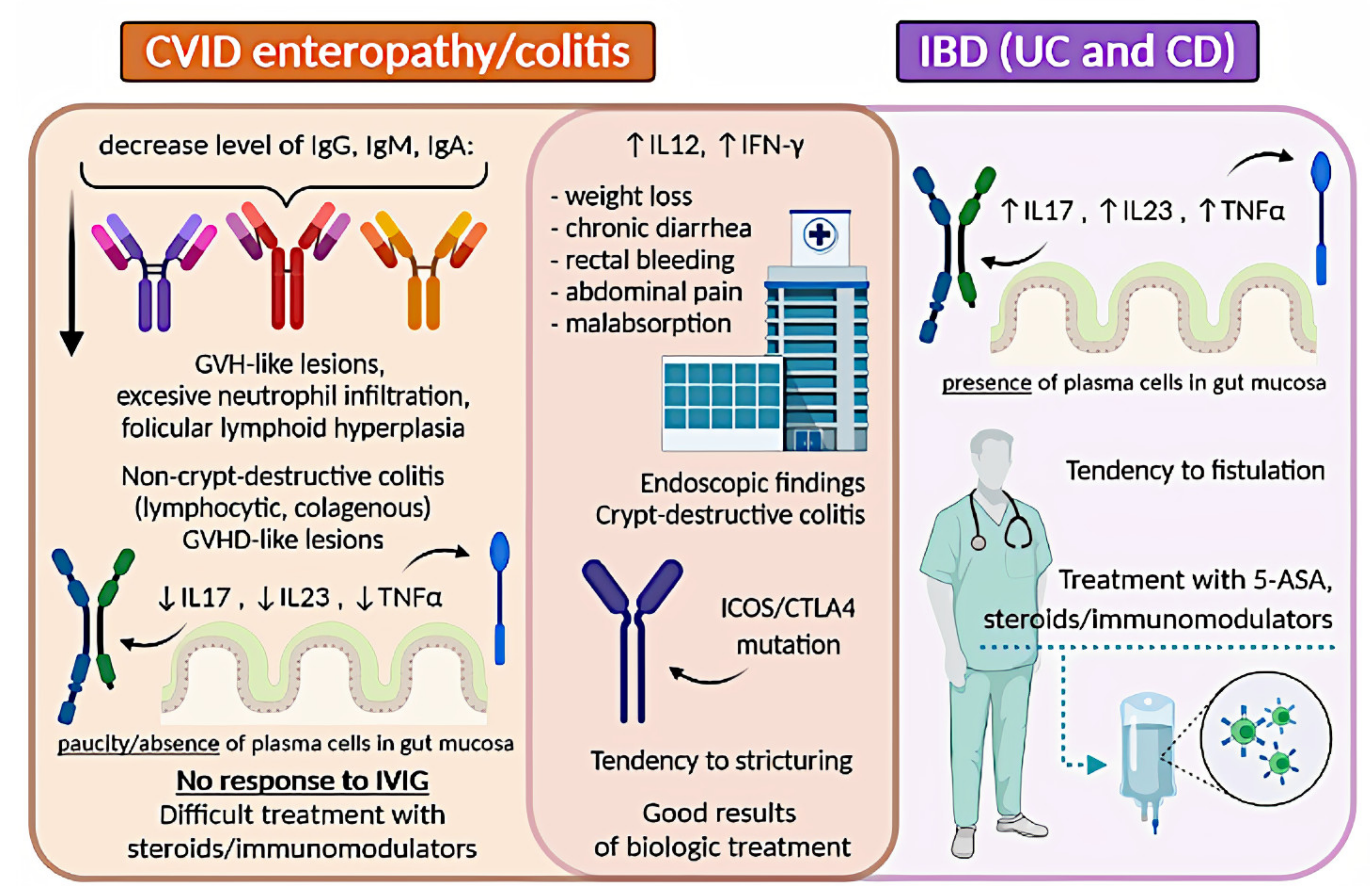