Submitted Successfully!
Thank you for your contribution! You can also upload a video entry related to this topic through the link below:
https://encyclopedia.pub/user/video_add?id=15050
Check Note
2000/2000
Water Quality Degradation
Edit
Upload a video
This entry is adapted from 10.3390/w13192660

Water quality degradation is happened through the natural processes that influence the surface water and groundwater quality by various sources such as climate changes, natural disasters, geological factors, soil-matrix, and hyporheic exchange. Water could also be contaminated by anthropogenic factors. Anthropogenic pollutants are substances caused by human actions, mostly resulting from land-use practices.

Water resources are essential for life as we know it, in cultivated farmland, sustainability, human consumption, economic development, and environmental systems [1]. Globally, over five billion inhabitants are dependent on groundwater and surface water systems since people use these resources in numerous ways such as potable water, housing, crop production, and manufacturing applications [2][3]. The degradation of water resources is a much-studied phenomenon and can be caused by natural processes (climate change, water-rock interactions, and geological factors) and human activity (agriculture practices and urban waste), as well as the presence of considerable chemical compounds since the industrial revolution [4]. Despite this, the management of surface water and groundwater as resources remains complicated in many circumstances and relevant information remains unknown [5]. Apart from anthropogenic activities, natural heterogeneities of rock/soil interact with water, influencing natural water cycles and affecting water quality across all domains [6]. Such modifications can have severe repercussions for the functioning of human health and the living organism [7]. In addition, the physicochemical and biological characteristics, as well as quality, quantity and availability of water resources, fluctuate because of the impact of natural and human activities [2]. The pollutant types, pathways, and sources, as well as how they influence the surface water and groundwater systems based on natural sources and anthropogenic activities, are shown in Figure 1 . 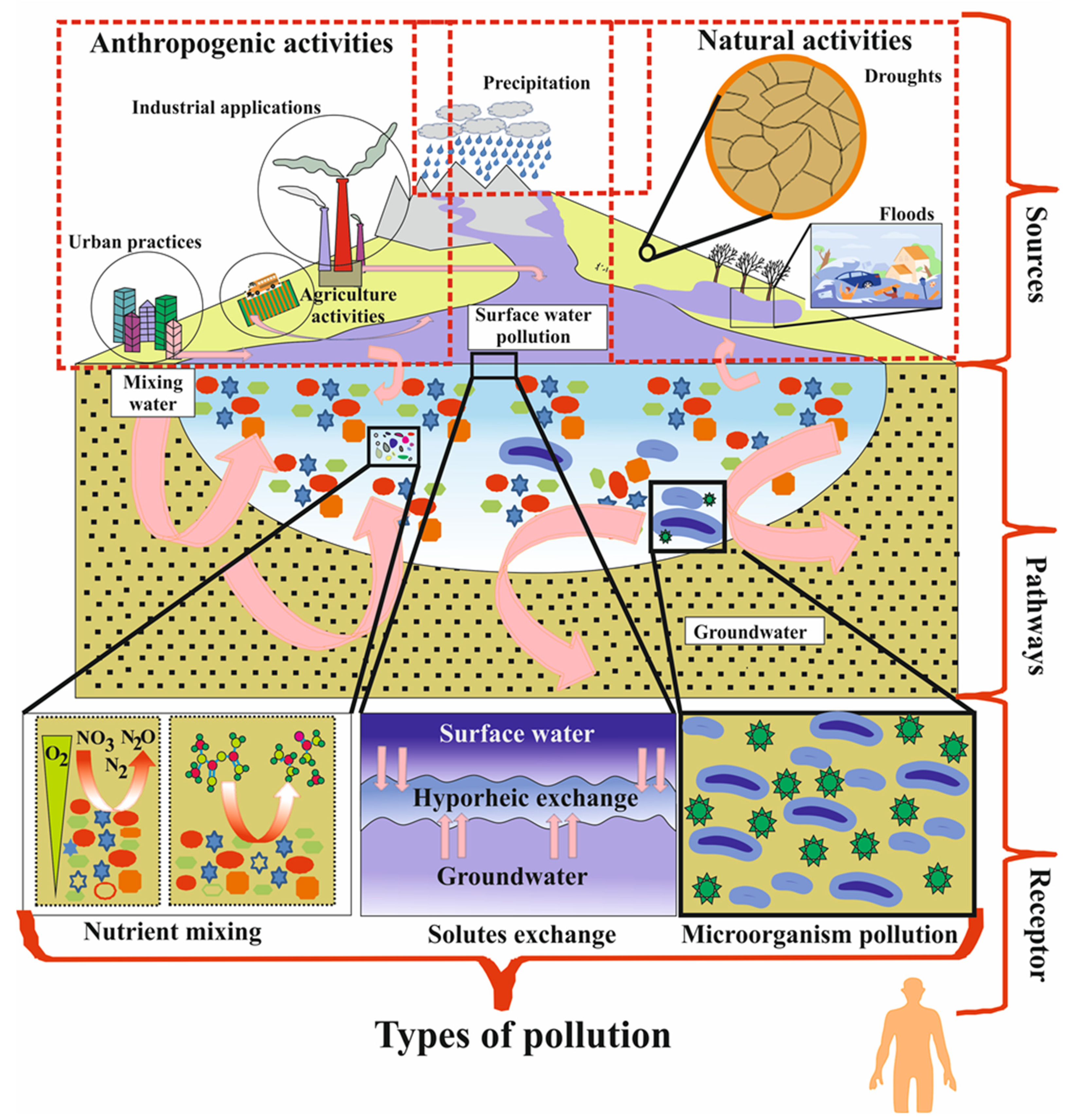 Figure 1. Schematic diagram illustrates water contamination due to natural sources (droughts and floods) and anthropogenic sources (industrial, agriculture, and urban activities), their pathways, receptors, and other types of pollution.

Surface water contaminations (specifically in rivers and streams) are mainly due to urbanization, agriculture, and manufacturing discharge [8]. In addition, environmental physical factors can also cause contamination, whereas the temperature of an aquatic environment can fluctuate with heated water discharged from power plants [9]. Moreover, hydro-heated water or water containing certain contaminants may not become an issue at any time of the year if it is immediately diluted by combining with surface water [10]. Further, pollutants released by agriculture activities include metals, pesticides, pathogens, nutrients, and salts that influence surface water [11][12]. Moreover, untreated and partially treated sewage, construction waste, and solid/liquid waste factors contain hazardous substances emitted into the river water by urban activities [13].
Some inorganic substances, such as zinc, iron, copper, nickel, etc., are necessary for the development of animals and plants, but these substances are harmful for animals or plants when the concentrations go above the acceptable limitations [14]. In addition, certain heavy metals such as lead, mercury, cadmium, and arsenic are no longer essential for the growth of plants and animals [15]. These toxic metals are mainly attributed to wastewater effluent in surface water due to conventional wastewater treatment, municipal waste based on activated sludge activities, and household waste [16]. Such pollutants are found widely at low concentrations from nanograms/liter (ng/L) to micrograms/litre (μg/L) [17]. Consequently, these toxic pollutants are released into river water either directly or indirectly, mainly by industrial waste, municipal and urban factors, as well as contaminated surface water discharge into the groundwater aquifer system by infiltration through soils and land-use practices [18].
Groundwater aquifer vulnerability and its pollution risk in the anthropogenic environment increases from the complicated interactions of the natural mechanisms of the hydrological system with the physical changes to the land surface, discharge waste from human factors, and water resource exploitation [19]. Further, physical landscape alterations cause an increase in the vulnerability of groundwater systems through topography changes, artificial water bodies, construction, river channeling, surface sealing, and changes in surface ruggedness [20]. In addition to the change in land use and land cover, the widespread utilization of synthetic and natural chemical compounds (pesticides and fertilizers) is also part of anthropogenic activity [21]. Utilization of these compounds generates agricultural productivity and can be beneficial for animal and human health, sufficient energy, functional infrastructure, and production of materials [22][23]. Nevertheless, numerous compounds used extensively today have been revealed to be persistent, mobile and soluble in aquifer systems, which is harmful to human health and environment systems [24]. Several other substances are still unknown threats, and thus far, the risk that chronic product exposure to a combination of substances has been difficult to quantify in many environmental areas.
When groundwater is polluted with toxic chemical compounds through human activities it can become unsuitable for several years [25]. The residence time of chemical pollutants can be retained in the groundwater system for weeks to months, years, and decades [26]. It depends upon the properties of the physicochemical compounds and environmental scenarios, and further lack of water supplies does not remove the effects of the groundwater pollution. Previous studies have identified the flow of groundwater through the hydrological cycle of pollutants from waste sewage or spill areas to surrounding rivers, channels, and lakes [2][27]. In the scientific community, problems in the context of groundwater pollution are widely known. Regulatory bodies have determined the high level of numerous toxic compounds in potable water systems at many places of the world. For instance, nitrate and fertilizer compounds have been recorded at high concentrations in groundwater systems [28]. Therefore, the contamination resulting directly from agriculture and industrial activities is a persistent and growing problem. According to recent estimates, 80% of the world’s population in 25 countries suffer the horrible death of infectious diseases caused by groundwater contamination [29]. The current expansion of human practices is often contrasted directly with what is required to safeguard groundwater supplies for future consumption [30][31].
This review discusses several major contaminants of water resources degraded by natural and human factors, as well as several critical inorganic pollutant classifications released from anthropogenic activities. Furthermore, this study highlights several case studies in the literature investigating historical and emerging issues in polluted water resources and the diversity of issues in various areas of the globe. The impacts of these activities are described to emphasize the multiple issues arising if anthropogenic regulations are present on top of natural controls [32]. Scientific and government regulations have highlighted the critical need for better comprehension of pollutant processes in water resources and the environment [33]. The complicated interactions between types, sources, and transport pathways of water resource pollutants in various settings have been addressed in this study. Consequently, sustainable water quality should be secured rapidly, and transdisciplinary and transboundary activity is required, especially as humans go towards 2025 [23][34].

An important problem for environmental researchers and decision-makers remains the improvement of understanding the extent and behavior of polluting chemicals on the surface and subsurface as well as the combined impact of a combination of substances [35][36][37]. Some countries have been performed and created a standard with limitations based on information on current regulations for water resource concentration, especially drinking water [38][39][40]. These are critical factors that must be recognized, regardless of the complexity of solvent movement, reaction, and surface activity, whether compound control, mitigation, or water system rehabilitation is to effectively protect or enhance water quality. In this section, the characteristics of several prominent inorganic water pollutants are discussed (nitrate, fluoride, and heavy metal concentration).

Non-carbon-based materials are referred to as inorganic pollutants. The most significant inorganic substances are naturally found in the environment system, such as nitrogen, fluoride, and heavy metals [14]. Furthermore, arsenic, fluoride, and iron pollutants are geogenic, while nitrates and some other heavy metals are mainly caused by anthropogenic behavior such as weak wastewater systems, poor agricultural practices, and industrial discharges [41]. In groundwater, in many regions of the world, including India, high levels of metals (mainly heavy metals) and other toxicants, such as fluoride and nitrate, have been found beyond the threshold limit, rendering them unfit for drinking. The most studied heavy metals produced by different wastewater factories are arsenic, copper, chromium, mercury, nickel, and zinc [42]. The impact of inorganic contaminants and their organic forms on flora and fauna of the Earth’s environment is devastating (atmosphere, lithosphere, and hydrosphere), as they cause many health-related issues (abnormal growth, high risk of breast cancer, diabetes, obesity, etc.).
This results in oxygen depletion as the phase of decomposition occurs. These components overgrow and use a lot of oxygen during their development. The dissolved oxygen may be used more than can be filled during the decomposition process, contributing to the shortage of oxygen and having severe implications for the biota stream [43]. Failure to provide oxygen may destroy aquatic species. When marine species die, the components break down and cause more oxygen depletion. A type of organic pollution can occur when aquatic environments accumulate inorganic contaminants such as nitrogen and phosphates [2]. Inorganic contaminants such as nitrogen and fluoride are illustrated in Table 1.
Table 1. Water pollution due to fluorides and nitrates in numerous countries across the world.

Heavy metals are found on the Earth’s surface by natural and anthropogenic activities [52]. Heavy metals are naturally released from volcanic eruptions, metal corrosion, soil erosion, atmospheric sources, and weathering of rocks or minerals. Heavy metals are discharged primarily from industries, domestic wastes, mining, smelting or treating of ores, landfills, and livestock, and secondarily from pesticides and fertilizers. Heavy metals are a broad concept in the metals/metalloids group, and they have a more dominant atomic density of more than 4000 kg/m3 [14]. Even with low metal ions’ concentration in water supplies, nearly every heavy metal is harmful to human beings [53]. The quantity and quality of water resources are affected by the high concentration of heavy metals as well as availability for human consumption.
High quantities of these toxic substances are dangerous to humanity and may interact with several aspects of the earth because of their harmful effects and portability. In addition, these toxic metals are non-biodegradable and challenging to clean. Heavy metal contaminations in water resources and the environment must be monitored, recognized, and regulated. Toxic elements are released mainly from the exploitation of treated wastewater, industrial wastewater, sewage sludge, fertilizers, mining operation, and soil minerals; thus, the discharge of this waste into water becomes polluted [14]. Moreover, heavy metal concentrations are absorbed into the water bodies by various industries’ effluents (tanneries, electrical products, electroplating, dyes, and others) and cause significant environmental problems even at low concentrations of metal ions. These substances are directly or indirectly discharged into the surface water, which increases the concentration of the ions and percolates in the groundwater, as well as polluting both [3].

Geological processes, natural disasters, climate change, and surface water and groundwater interactions are the main natural causes of contamination. There are case studies available that cover various issues such as surface water and groundwater quality and contaminating sources. However, there are few case studies that examine specific topics such as water resources pollution types, sources, and pathways. The multitude of cases demonstrates the wide range of subjective challenges to water systems as a result of long-term supplies for human utilization and environmental protection. Challenges include food production, urban development, increased drug production and usage, and inadequate sewage facilities, as well as declining scientific evidence on water quality. In such cases, a lack of importance placed on water resources as renewable hampers the complicated problem of maintaining water quality. Transdisciplinary study and practice can serve to gain better knowledge to understand the pollution processes, types, pathways, and their consequences on water resources. This makes for a lot of possibilities for interdisciplinary research areas (environmental sciences and related fields) and transboundary communication.