Submitted Successfully!
Thank you for your contribution! You can also upload a video entry related to this topic through the link below:
https://encyclopedia.pub/user/video_add?id=14901
Check Note
2000/2000
Lipoprotein(a) and Cardiovascular Diseases
Edit
Upload a video
This entry is adapted from 10.3390/biomedicines9091271

Lipoprotein(a) (Lp(a)) is a low density lipoprotein particle that is associated with poor cardiovascular prognosis due to pro-atherogenic, pro-thrombotic, pro-inflammatory and pro-oxidative properties. Traditional lipid-lowering therapy does not provide a sufficient Lp(a) reduction. For PCSK9 inhibitors a small reduction of Lp(a) levels could be shown, which was associated with a reduction in cardiovascular events, independently of the effect on LDL cholesterol. Another option is inclisiran, for which no outcome data are available yet. Lipoprotein apheresis acutely and in the long run decreases Lp(a) levels and effectively improves cardiovascular prognosis in high-risk patients who cannot be satisfactorily treated with drugs. New drugs inhibiting the synthesis of apolipoprotein(a) (an antisense oligonucleotide (Pelacarsen) and two siRNA drugs) are studied. Unlike LDL-cholesterol, for Lp(a) no target value has been defined up to now. 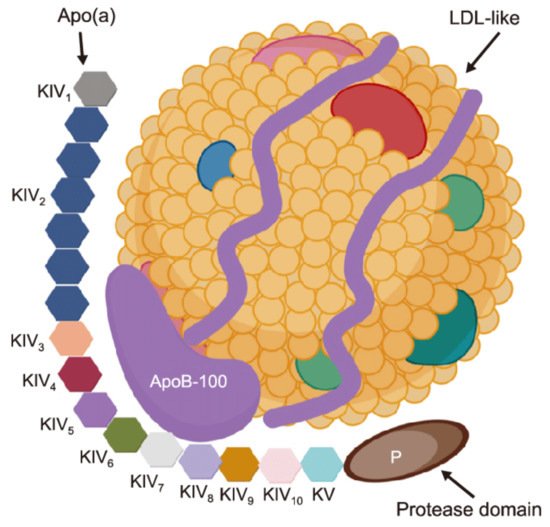 Figure 1. Lipoprotein(a) [Lp(a)] structure. Created with BioRender.com. Reprinted from Ref. [2].
This lipoprotein had been detected in 1963, in the 1990s studies demonstrated its role in the development of myocardial infarction or stroke. In the last years Lp(a) was internationally recognized as an important atherogenic risk factor. Its elevation can be observed in European populations, but especially persons of African origin exhibit highly elevated Lp(a) concentrations. It has been proposed that the physiological role of Lp(a) may be to promote wound healing. Its normal concentration does not exceed 30 mg/dL (75 nmol/L), in some people no Lp(a) can be detected [3]. It is interesting that Lp(a) is only found in human beings, in old world monkeys, and hedgehogs.
Lp(a) consists of two major components. The first component is an «LDL-like» particle, its structure is similar to an LDL. This particle contains apoB-100. The second component is a specific glycoprotein apolipoprotein(a) (apo(a)), which is bound covalently to the apoB contained in the outer shell of the particle. This particle is similar to plasminogen with a size ranging from 300 to 700 kDa. [3].
LPA gene controlled Lp(a) plasma concentrations, they are individual. This gene is located on chromosome 6q26-27. The variability in size of apo(a) is caused by copy number variations within the LPA gene that determines the number of kringle IV (K-IV) Type 2 repeats [4][5]. These variable apo(a) sizes are called as “apo(a) isoforms.” A correlation was found between the apo(a) isoform size and the Lp(a) plasma concentration. The larger isoforms accumulate intracellularly and induce a slower rate of production. Lp(a) is synthesized after its release from the cells, so the larger isoforms limit the Lp(a) plasma concentration [4][5]. In contrast, a low number of isoforms is associated with a higher Lp(a) concentration.
Lp(a) influences both to the processes of atherogenesis and thrombogenesis. This lipoprotein was found to be involved in the following pathogenetic mechanisms of atherogenesis: increasing arterial wall cholesterol deposition, attracting inflammatory cells to vessel walls and inducing monocyte-chemotactic activity in sub-endothelial spaces, generation of oxidized radicals in monocytes, foam cell formation, and smooth muscle cell proliferation [1]. Lp(a) is the major carrier of a wide array of oxidized phospholipids and is the trigger of multiple proinflammatory pathways [1][6]. Lp(a) also is hypothesized to be involved in tissue repair through the interacting with components of the vascular wall.
Activation of thrombogenesis by Lp(a) is explained by the fact that the structure of apo(a) is similar to plasminogen. Lp(a) competes with plasminogen for its binding site, decreases plasmin synthesis and inhibits fibrinolysis. Lp(a) stimulates the secretion of PAI-1. However, high Lp(a) concentrations were not associated with the risk of venous thrombosis or venous thromboembolism in clinical trials [3].
A linear relationship between Lp(a) concentration and coronary heart disease incident in general population was supported by Mendelian randomization analysis [7]. Based on available data, European guidelines suggest, that an Lp(a) concentration of 50 mg/dL or higher is a potential target for treatment, and it should be mentioned, that this point is absent in the United States guidelines [8][9]. It is estimated that about 20% of a European population have elevated Lp(a) levels. Though it has to be admitted that not each person with such a feature will develop cardiovascular diseases. Evidently, additional risk factors like smoking, arterial hypertension, hyperlipidemia, renal insufficiency, and diabetes mellitus play a role. Very often patients who suffer from a myocardial infarction at a young age (before 50 years) come from families where the parents or even grandparents were affected from cardiovascular events at a comparatively young age. In the present time, new drugs are in the pipeline which will rather effectively and specifically decrease Lp(a) concentrations. Among the available drugs only PCSK9 inhibitors exert such an effect, but an elevation of Lp(a) is no officially accepted indication for their use. In some countries, first of all in Germany, high Lp(a) levels are accepted as an indication for the extracorporeal lipoprotein apheresis (LA) [8].
This review reports about the current situation with respect to the efficiency and mechanism of action of drugs decreasing Lp(a) concentrations and points out the position of LA. Special attention will be paid to outcome data for cardiovascular events.
A major problem which has not been resolved up to now is the difficulty of measuring Lp(a) concentrations. The number of Kringles IV Type 2 which is mainly responsible for the given level has an impact on the accuracy of the measurement. Previously, the mass of Lp(a) was measured (the dimension is mg/dL), more recently the number of Lp(a) particles is estimated (the dimension is nmol/L). It is not possible to convert simply one dimension into the other.
In addition, certain mutations in the Apo(a) gene may have an effect on Lp(a) concentrations, but looking for these mutations is not recommended in daily practice.

However, FDA did not approve any drugs for Lp(a) lowering. PCSK9i are one of the few pharmacotherapeutic options, which can reduce Lp(a). They can be used as monotherapy (e.g., PCSK9i), or in combination therapy (e.g., PCSK9 inhibitor + niacin) [10][11][12].
PCSK9i lower Lp(a) concentrations by approximately 25% [13][14] and it was observed, that it can reduce [15][16][17]. In the Fourier Study a weighted least square linear regression analysis that examined the association between treatment effect on CHD death, MI, or UR and per unit decrease in Lp(a) adjusting for differences in LDL-C showed a significant risk reduction for Lp(a). In the Odyssey Outcomes Study mathematical models have been used to calculate the effect of the reduction of Lp(a) by the PCSK9 inhibitor independently of the baseline and concomitant reduction of Non-HDL-C and LDL-C levels. Also, clinical and demographic variables have been taken into account. Using these models an independent effect of the reduction of Lp(a) on outcome data was shown [18][19][20]. In the FOURIER analysis the median baseline Lp(a) value was 37 nmol/L, a higher rate of major coronary events (coronary heart disease (CHD), death, MI, or urgent revascularization) in patients with higher baseline Lp(a) values was shown [19].
Greater efficacy was displayed in patients with higher baseline Lp(a), a 23% reduction with baseline Lp(a) above the median versus 7% below the median. Major coronary events were reduced by 15% per 25 nmol/L reduction of Lp(a). The ODYSSEY OUTCOMES analysis revealed a median baseline Lp(a) of 21.2 mg/dL and like the FOURIER analysis, confirmed baseline Lp(a) predicted MACE incidence. The effect of Lp(a) lowering on MACE could be shown after adjustment for demographic and clinical variables [20]. In the alirocumab group, median reduction in Lp(a) was 23.6% (5 mg/dL) and predicted reduction in MACE (HR 0.86, 95% CI 0.80–0.92), independent of LDL-C. Thus, PCSK9 inhibition may represent a therapeutic modality, that refines residual risk management beyond solely lowering LDL-C.
In practice 13% of patients have unusual responses (not optimal decreasing of LDL level) to PCSK9 inhibitors [21]. One of possible explanations for this fact is that these patients had high concentrations of Lp(a) [21]. The exact mechanism for Lp(a) clearance is not fully elucidated, but it is influenced by PCSK9 inhibitors. It was found that PCSK9i reduce LDL-C and Lp(a) in 2:1 ratio. For example, LDL-C reduced by 50–60% and Lp(a) by 25–30%. However often it may be in a discordant manner—in more than 30% Lp(a) and LDL-C do not fall concordantly [22][23]. As was shown by B. Warden, patients with unusual response to PCSK9i had a 2.5-fold higher baseline of Lp(a) compared to usual responders (73 vs. 30 mg/dL, respectively), but baseline LDL-C concentration was similar in both groups (133 vs. 132 mg/dL, respectively). Thus, the reduced LDL-C response could be accounted for the higher proportion of the LDL-C, consisting of Lp(a) particles, which are not cleared efficiently by the LDL receptor [21].
Also, a high prevalence of discordance in LDL-C and Lp(a) reduction was demonstrated in response to evolocumab, particularly when baseline Lp(a) concentrations were higher. This fact indicates the possibility of alternative pathways of Lp(a) reduction by evolocumab beyond LDL receptor (LDLR)–mediated clearance [23].
The exact mechanism of Lp(a) lowering by PCSK9i remains unknown. Current hypotheses include several assumptions: (1) increased clearance of Lp(a) particles via the LDLR [24]; (2) increased clearance of Lp(a) via additional receptors (LDL receptor-related protein 1[LRP1], cluster of differentiation 36 receptor [CD36], toll-like receptor 2 [TLR2], scavenger receptor-B1 [SR-B1], and plasminogen receptors) [25]; (3) reduction in apo(a) production, secretion, and/or assembly [26][27][28].
There are several challenges for the fact, that Lp(a) is largely cleared from the plasma via LDLR. Some of them are the following: the affinity of Lp(a) for the LDLR is far less than that of LDL [27]; Lp(a) catabolic rates are similar in familial hypercholesterolemia (FH) and non-FH patients [29]; Lp(a) levels are largely unaffected by drugs, that upregulate the LDLR (e.g., statins) [30]; PCSK9 inhibition in patients with homozygous FH (HoFH) and null LDLR mutations lowers Lp(a) more than LDL-C levels [30]; similar levels of Lp(a) were seen in carriers vs. non-carriers of loss of function PCSK9 mutation [31][32][33]; and epidemiological studies do not consistently demonstrate a correlation between plasma PCSK9 and Lp(a) concentrations [34].
If the LDLR was a major pathway for Lp(a) clearance, then PCSK9 antagonism should produce proportional reductions in LDL-C and Lp(a), with patients achieving the 2: 1 ratio (LDL-C 50–60%: Lp(a) 25–30%) seen in the large clinical trials. However, recent works has highlighted the fact that a significant proportion of patients demonstrate discordant responses with robust reductions in LDL-C but minimal or no reduction in Lp(a) [22][23]. Two recent studies have examined the issue of discordance, defined a ratio LDL-C: Lp(a) reduction as 3.5:1. This corroborates to an LDL-C reduction of ≥35% and an Lp(a) reduction ≤10% [22][23].
Patients with lower baseline Lp(a) demonstrated the greatest Lp(a) reductions in response to PCSK9 inhibition. The PROFICIO (Program to Reduce LDL-C and Cardiovascular Outcomes Following Inhibition of PCSK9 in Different Populations)—is the clinical trial program, which evaluated 895 patients receiving evolocumab [24]. Baseline LDL-C and Lp(a) concentrations were 133 and 46 mg/dL, respectively. Average reductions on evolocumab were 63.3% and 29.6%, and it confirmed the expected 2:1 ratio. The study displayed a moderate correlation (r = 0.37, p < 0.001) between percent LDL-C and Lp(a) reduction. Discordance was progressively more prevalent among those with higher baseline Lp(a), 10 mg/dL (19.7%), 30 mg/dL (26.5%), and >50 mg/dL (28.6%) [24].
It is conceivable that Lp(a) clearance may be dependent on apo(a) isoform size. PCSK9i induced Lp(a) reduction, which correlates to baseline Lp(a) values, with larger isoforms, signifying lower plasma concentrations, seeming to be more effectively cleared. Importantly, both of these studies suggest, that there are other mechanisms and/or pathways beyond LDLR that account for PCSK9i induced Lp(a) reductions [35].
Numerous animal studies help to interpret clinching data on the metabolism of the role of Lp(a) and its metabolic characteristics [36][37]. It was shown that modulation of LDLR expression with the PCSK9 inhibitor alirocumab did not alter the cellular or the hepatic uptake of Lp(a), LDL receptor is not a major route for Lp(a) plasma clearance [37]. This research has some limitations. The results of this work have clinical implications because they underpin why statins are not efficient at reducing Lp(a).

More
© Text is available under the terms and conditions of the Creative Commons Attribution (CC BY) license (http://creativecommons.org/licenses/by/4.0/)
Upload a video for this entry
Information
Subjects: Allergy
Contributor MDPI registered users' name will be linked to their SciProfiles pages. To register with us, please refer to https://encyclopedia.pub/register :
Tatiana Kuznetsova
View Times: 26
Revisions: 2 times (View History)
Update Time: 09 Oct 2021
Table of Contents
1000/1000
Hot Most Recent