Submitted Successfully!
Thank you for your contribution! You can also upload a video entry related to this topic through the link below:
https://encyclopedia.pub/user/video_add?id=14878
Check Note
2000/2000
Aluminum Alloy 5083
Edit
Upload a video
This entry is adapted from 10.3390/jmmp5030088

The semi-solid metal (SSM) 5083 aluminum alloy was developed for part manufacturing in the marine shipbuilding industry and including other industries using this material in the manufacture of parts.

Several factors need to be addressed in the manufacture of parts in the marine shipbuilding industry, such as corrosion resistance, strength, and material weight. Aluminum is one of the most popular materials for producing parts because it is lightweight and strong. Aluminum alloy 5083 is one of the materials that meet the criteria because this type of aluminum has a low density, good corrosion resistance, good formability, and is the strongest non-heat-treatable alloy used in annealed conditions [1]. In the manufacture of specific marine ship-building components, a casting process is required. Dendritic microstructures can be formed in most alloy casting processes, which affect the strength of the material. However, improving the structure of the parts through the casting process can be achieved using the semi-solid casting method. This involves forming the metal by casting and partially hardening the metal with nondendritic grains or spheroidal/globular grains. Wannasin J. [2] developed a gas-induced semi-solid process for industrial applications, known as the gas-induced semi-solid (GISS) technique. This process applies fine gas bubble injection, using argon or nitrogen, for example, through a graphite diffuser into metallic water in order to produce semi-solid metals through the principle of metal water displacement and spot heat suction.
Friction stir welding (FSW), a popular marine shipbuilding welding method, involves lower temperatures than the melting temperature. This solid-state welding technique has many advantages, such as producing a fine microstructure, strong welding metallurgical properties, and no loss of mixed elements [3]. Kumar et al. [4] investigated the FSW characteristics in AA5083 and AA6063. The results showed that the welded joints were free from severe defects. The variation in hardness was due to the phase binding of the dissimilar alloys and the changes in the grain structure. Koilraj et al. [5] studied the FSW characteristics of the dissimilar aluminum alloys AA2219 and AA5083 to establish the optimal process parameters using the Taguchi technique. It was found that materials on the advancing side occupied the weld area. The minimum welding hardness occurred in the heat-affected zone (HAZ) on the AA5083 side. Durga Prasad M.V.R et al. [6] optimized the process parameters for FSW on the dissimilar aluminum alloys AA5083 and AA6061 using Taguchi L9 orthogonal array. It was found that the welding speed was an important factor that affected the percentage of elongation and hardness in the weld zone. The tool angle is an important factor in determining the hardness at the HAZ and the thermal–mechanically affected zone (TMAZ). Cavity defects were found in all joints welded with threaded cylindrical tools. Raweni A et al. [7] studied the optimal parameters for FSW on AA5083 using the Taguchi method with a signal-to-noise (S/N) ratio analysis to establish suitable welding parameters and ANOVA to determine the influence between the parameters. Bayazid S.M et al. [8] studied the effects of FSW parameters, such as rotational speed, welding speed, positioning of the joint plate on the microstructure, and mechanical properties of alloys 6063 and 7075 using the Taguchi technique and ANOVA. The results of the study showed that the rotational speed, welding speed, and placement of the plates influenced the tensile strength of the joints by 59%, 30%, and 7%, respectively. A predictive model was established for the tensile strength according to the FSW parameters and the experiments. Shojaeefard M.H et al. [9] studied the mechanical and microstructure properties of AA1100 in FSW using the orthogonal Taguchi L9 experimental design to determine and forecast the optimal grain size value. The ultimate tensile strength and hardness were verified for accuracy by running a confirmation test with the optimal parameters. ANOVA was also performed to determine the most important factor in FSW. Javadi Y et al. [10] studied residual stress arising from the FSW of 5086 aluminum sheets using the Taguchi statistical experimental design to determine the optimal welding parameters, including feed rates, rotational tool, pin speed, pin diameter, and shoulder diameter. The optimal parameters of the process depended on the effect of the residual stress connection parameters. According to ANOVA, it was concluded that the most significant effect on the maximum longitudinal residual stress was the feed rate, whereas the pin and shoulder diameter had no notable effect. The change in rotational speed led to the change in the heat that occurred during welding, which greatly affected the residual stress. Gite R.A et al. [11] criticized the application and parameters of FSW. Sillapasa et al. [12] investigated the fatigue strength of a different friction stir welding process (FSWp) using 6N01 and 7N01 and found it to be adequate. The relationship between the fatigue strength and the hardness was σa (R = −1) = 1.68 HV (σa is in MPa and HV has no units).

The SSM 5083 aluminum alloy specimens manufactured using the FSW process were prepared for mechanical property testing and analysis of their metallurgical structures, as shown in Figure 1.

Figure 1. The cutting distance of the welding workpiece for mechanical properties testing and metallurgical structural analysis.
For the preparation of the tensile specimens, a HAAS TM-1 CNC VERTICAL MILLING MACHINE was used to reduce the specimen’s width; their thickness and surface features were maintained. The tensile tests were conducted using a universal testing machine (NARIN; model: NRI-CPT500-50 NARIN INSTRUMENT Co., Ltd.; Samut Prakarn, Thailand), according to the American Society for Testing of Materials standard ASTM E8M-04 [13], as shown in Figure 2.

Figure 2. Dimensions of the ASTM E 8M-04 standard tensile specimen [13].
Welding hardness test was performed across the SZ, the HAZ, the TMAZ, and the BM using a Vickers’s microhardness tester (SHIMADZU: model: HMV-G Series; Tokyo, Japan) at a load of 0.2 kgf, an indentation distance of 0.2 mm, and an indentation time of 10 s. The distance between the test points was 15 mm from the center of the workpiece on both the advancing side (AS) and the retreating side (RS), as shown in Figure 3.

Figure 3. Profile of hardness test positions.
The specimens were prepared for macrostructural analysis using the resin aluminum casting technique. They were then polished using different grades of emery papers: from P220 to P1200. Then, the samples were polished with alumina powder (1–3 microns). Thereafter, the samples were etched with a mixture of 100 mL H2O and 3 mL HF for 25 s. Finally, they were rinsed with distilled water and wiped clean with alcohol. A hot air gun was used to blow over the samples in order to dry them faster.
The specimens were prepared for microstructural analysis with the same procedure as macrostructural workpieces, except that the samples were etched with the mixture of 190 mL H2O, 5 mL HNO3, 3 mL HCl, and 2 mL HF for 10 s. These chemicals were obtained from UBU Materials Laboratory, Ubon Ratchathani University, Ubon Ratchathani, Thailand. An optical electron microscope (LEICA; model: SDM2500M; Wetzlar, Germany) was used to observe the microstructure of the welded joint at the HAZ, the TMAZ, and the SZ. It was equipped with SEM (FEI; model: Quanta 450 FEG; Zurich, Switzerland). EDS (Oxford Instruments; model: X-Max 50; Oxford, UK) was used to analyze the chemical composition.

From the tensile strength analysis of the rotational speed of 1200 rpm, a welding speed of 10 mm/min, and a threaded cylindrical tool pin profile had the maximum tensile strength at 221 MPa, it was found that the defect location of the specimens occurred at the heat-affected zone on the advancing side (AS-HAZ) because the HAZ had the lowest mechanical properties compared to the other areas. This was because fractures often occurred in the HAZ [14], as shown in Figure 4. 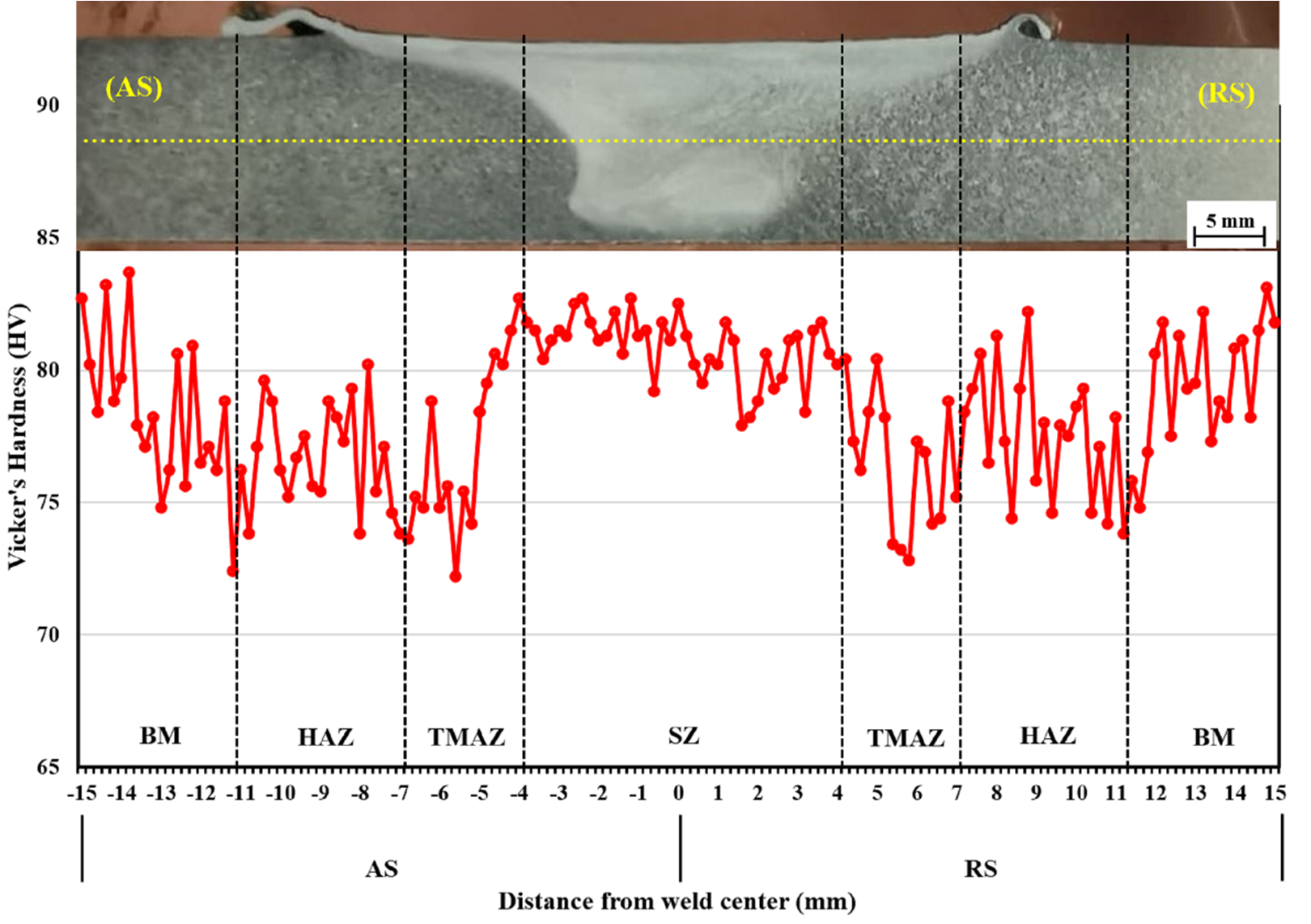 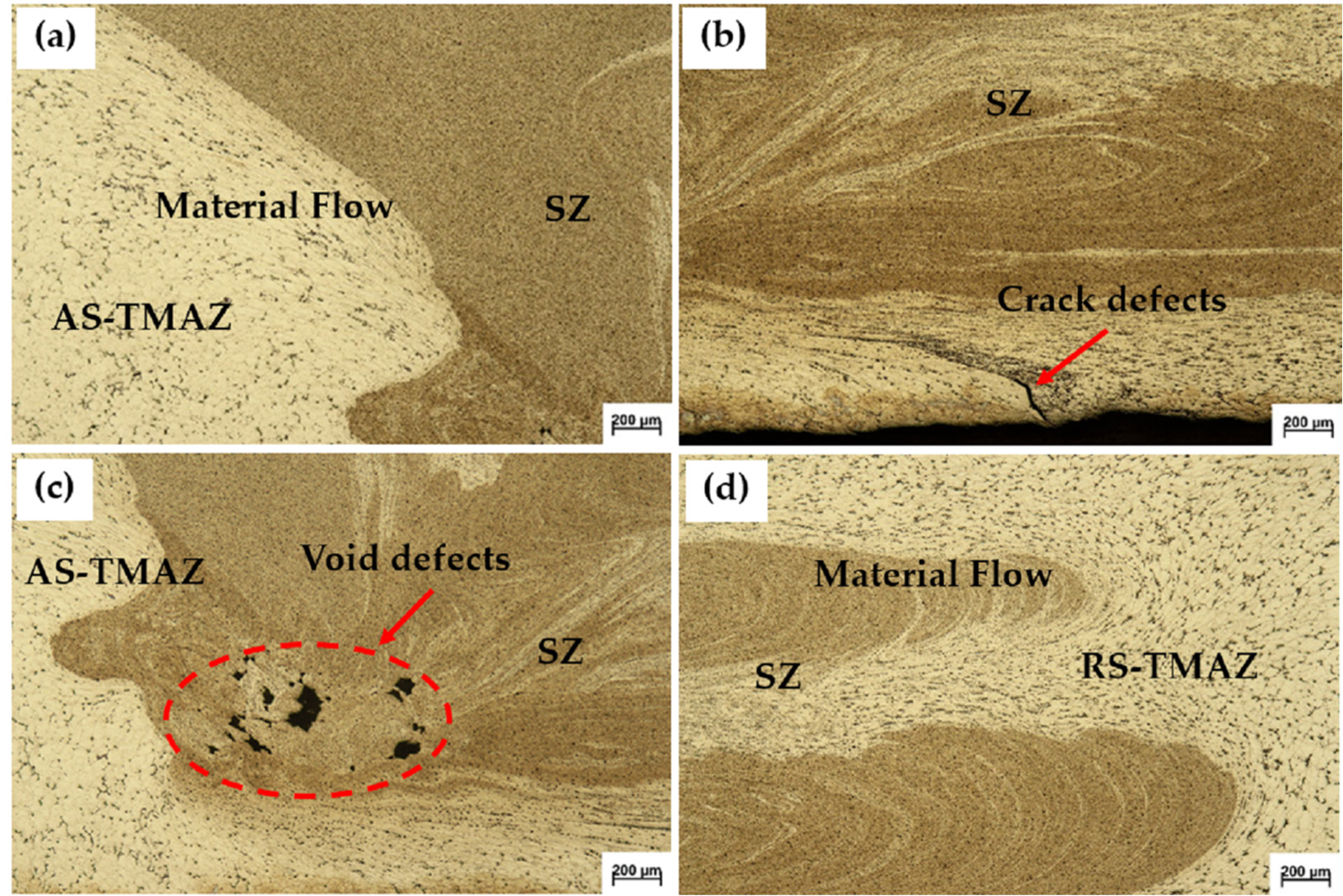 4.  Signal-to-Noise Ratio (S/N Ratio) for the Tensile Strength and the Hardness in the SZ

Signal-to-Noise Ratio (S/N Ratio) The signal-to-noise ratio (S/N ratio) was analyzed for each level of the process parameters, wherein a higher S/N ratio indicates a better weld quality characteristic (the higher, the better) [[17][18]]. Therefore, the optimal process parameter was the one with the highest S/N ratio.

The optimal FSW process parameters for the successful friction stir welding of aluminum alloy SSM 5083 obtained from the tensile strength and the S/N ratio were as follows: A1B1C2: a rotational speed of 1000 rpm, a welding speed of 10 mm/min, and with a threaded cylindrical tool pin profile.

The optimal FSW process parameters for the successful friction stir welding of aluminum alloy SSM 5083 obtained from the hardness in the SZ and the S/N ratio were as follows: A2B1C2: a rotational speed of 1200 rpm, a welding speed of 10 mm/min, and with a threaded cylindrical tool pin profile.

More
© Text is available under the terms and conditions of the Creative Commons Attribution (CC BY) license (http://creativecommons.org/licenses/by/4.0/)
Upload a video for this entry
Information
Subjects: Metallurgy & Metallurgical Engineering
Contributor MDPI registered users' name will be linked to their SciProfiles pages. To register with us, please refer to https://encyclopedia.pub/register :
Konkrai Nakowong
View Times: 83
Revisions: 2 times (View History)
Update Time: 08 Oct 2021
Table of Contents
1000/1000
Hot Most Recent