Submitted Successfully!
Thank you for your contribution! You can also upload a video entry related to this topic through the link below:
https://encyclopedia.pub/user/video_add?id=14770
Check Note
2000/2000
Plant-Associated Burkholderia Species
Edit
Upload a video
This entry is adapted from 10.3390/ijms20010121

The genus Burkholderia belongs to the subphylum of β-proteobacteria and encompasses Gram-negative bacterial species with high genetic versatility and adaptability to various ecological niches.

The genus Burkholderia belongs to the subphylum of β-proteobacteria and encompasses Gram-negative bacterial species with high genetic versatility and adaptability to various ecological niches [1]. More specifically, they are able to occupy ecosystems as diverse as soils, plants, and even animal and human bodies as serious disease-causing agents [2][3][4]. Recently, Burkholderia organisms have drawn increasing attention as abundant and fundamental components of various ecosystems. The first member of the genus was isolated in 1942 from carnations displaying wilt and root-rot symptoms. It was initially named Phytomonas caryophylli and later renamed Pseudomonas caryophylli [5]. In 1950, another species was isolated from onions showing sour skin rot and named Pseudomonas cepacia [6][7]. Some members, originally included in the genus Pseudomonas, were later reclassified in the new Burkholderia genus due to improved taxonomic tools, the availability of techniques for DNA–DNA hybridization, as well as for 16S rRNA analysis [8]. Since then, many other species have been, and are still being, described and added to the genus.
The adaptability of Burkholderia spp. to diverse environments and their ecological versatility rely on the high genetic plasticity of their multi-chromosome genomes, rich in insertion sequences [9] and exhibiting a relatively high proportion of coding regions, allowing these bacteria to produce various metabolites with degradative potential [10]. Such metabolic capacity is a fundamental feature for their survival and fitness in different habitats [11].
The Burkholderia cepacia complex (BCC), one of the major components of the Burkholderia genus, comprises a group of related opportunistic human pathogen species responsible for pulmonary infections, particularly in immunocompromised and cystic fibrosis patients [9]. Due to the importance of BCC members as human pathogens, intensive research efforts and discussion have been devoted to the epidemiology of human diseases caused by Burkholderia spp. Other related species include animal pathogens such as Burkholderia mallei and plant pathogens such as Burkholderia glumae, Burkholderia gladioli, and Burkholderia plantarii. Notably, another group of plant-associated Burkholderia spp. comprises potentially beneficial species of plant growth-promoting or plant-symbiotic bacteria, favoring the healthy growth of plants by nitrogen fixation and protection against plant diseases. From the taxonomic standpoint, an effort is being made to better discriminate beneficial from pathogenic Burkholderia spp. [12]. 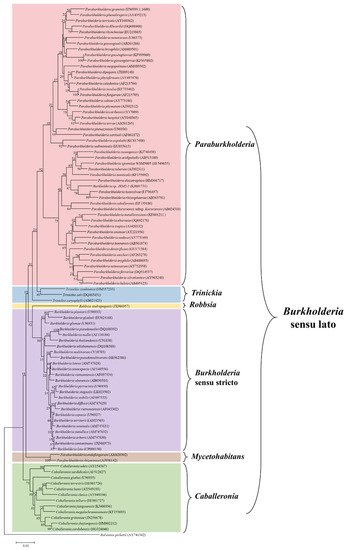 Figure 1. Phylogenetic tree constructed by the neighbor-joining method using 16S rRNA sequences of representative strains of Burkholderia sensu lato assemblage. The 16S rRNA sequences were retrieved from the SILVA database (https://www.arb-silva.de/). Species names were corrected to match the current taxonomic positions and the accession numbers for each sequence are given in parenthesis following the species name. The updated genera and their phylogenetic relationships are also shown. Ralstonia pickettii (AY741342) was used as an outgroup.
With regard to the scope of the current review, phytopathogenic Burkholderia species are classified in the Burkholderia sensu stricto group, closely related to the Burkholderia cepacia complex; the former Burkholderia andropogonis is currently a separate genus as Robbsia andropogonis; and Burkholderia caryophylli is now classified as Trinickia caryophylli. On the other hand, most of the plant-beneficial Burkholderia species were transferred to the Paraburkholderia and Caballeronia genera.

3. Genomic Features of the Plant-Associated Pathogenic and Beneficial Burkholderia

Because of the clinical importance of the B. cepacia complex, special consideration is devoted to these bacteria by genomic studies and, therefore, their genomes are well-characterized [9]. Besides common genomic features shared by most organisms of the large Burkholderia sensu lato group, functional features specific to the plant-associated groups are present and allow them to occupy various ecological niches with different lifestyles, as pathogens, legume nodulators, or biocontrol agents. Common features of Burkholderia species include relatively large multi-replicon genomes, the presence of genomic islands, and multiple insertion sequences conferring high genome plasticity [9][10].

Generally, Burkholderia organisms have larger genomes (7–8 Mbp on average) than other bacteria; however, the genome size greatly varies among different Burkholderia groups. The smallest genome among the free living Burkholderia (3.75 Mbp) is found in the fungal endosymbiont, Mycetohabitans rhizoxinica (basonym Burkholderia rhizoxinica), whereas the largest genome (11.5 Mbp) is found in the soil bacterium Paraburkholderia terrae (basonym Burkholderia terrae). It is suggested that genome size can provide insights into the evolutionary history and the relationships between Burkholderia species. It is also noted that the particular lifestyle of Burkholderia species might reflect selective pressure for a specific genome size [23].
Two main models for genome evolution in Burkholderia species were proposed: (i) plasmids might undergo rearrangements following parallel transfer, becoming established as additional chromosomes or megaplasmids and allowing for bacterial acquisition of essential genes; and (ii) loss of genomic information following rearrangements [24]. An example of the latter mechanism could be M. rhizoxinica, the obligate endosymbiont of the zygomycete Rhizopus microsporus, which is a causal agent of rice seedling blight development by production of rhizoxin [25]. The genome of M. rhizoxinica, containing one chromosome, a megaplasmid, and a plasmid, is remarkably small (relative to other Burkholderia), most likely because of rearrangements and deletion of genomic information, especially in genes coding for mobile genetic elements. The endosymbiotic lifestyle reduced the bacterial capacity to adapt to varying habitats and made efficient sensing superfluous [26][27]. On the other hand, a large part of the chromosomal coding region is devoted to the production of the secondary metabolite, rhizoxin [26][27].
Regarding the plant symbiotic Burkholderia, which can also be free-living in the bulk soil or water, a characteristic large genome size could explain their versatile lifestyle and the capacity to perform many plant-beneficial functions [28].
In another comparative genomic study of phytopathogenic Burkholderia species, Seo et al. [29] analyzed the genome sequences of different strains of B. glumae, B. gladioli, and B. plantariiand found genome size variations not only between species but also between different strains of the same species. For B. glumae, the smallest genome size, ~4.9 Mbp, was exhibited by the AU6208 strain, whereas the largest, ~7.2 Mbp, was found in the BGR1 strain. The relatively small genome size of B. glumae AU6208 could be attributed to genome rearrangements or deletions, as a result of adaptation to different hosts. Notably, although pathogenic to rice, AU6208 was originally isolated from infant patients, unlike other strains that were all isolated from rice as the original host. The genome size of B. gladioli BSR3 is ~9 Mbp and that of B. plantarii is ~8 Mbp.

A multi-replicon genome structure is found in most Burkholderia species with various numbers of chromosomes and plasmids. Martínez-Aguilar et al. [28] studied the multi-replicon genomes of plant-associated diazotrophic Burkholderia species and found that three strains of Paraburkholderia unamae and Paraburkholderia silvatlantica (formerly Burkholderia spp.) contain genomes of four replicons. The largest and smallest replicon sizes are ~3.31 and ~1.11 Mbp, respectively. In addition, the genomes of three strains of Paraburkholderia tropica (formerly Burkholderia tropica) contain five replicons ranging from ~3.24 to ~0.53 Mbp. The authors suggested that such multi-replicon large genomes could explain the capacity of these diazotrophic Burkholderia species to efficiently colonize the rhizosphere as well as endophytic environments.
A multi-replicon genome structure is also reported among the plant-pathogenic Burkholderia species. The genomes of the representative strains B. glumae BGR1 and B. gladioli BSR3 contain two chromosomes and four plasmids, while the B. plantarii ATCC43733 genome contain two chromosomes and one plasmid [29]. Agnoli et al. [30] found that deletion of the third chromosome from the genomes of several BCC species results in the attenuation of virulence and the loss of many functions such as the ability to utilize several substrates, antifungal activity, and biosynthesis of extracellular polymeric substances. Intriguingly, bacterial viability is not significantly affected, despite the massive loss of genomic information (~1 Mbp). This finding indicates that multi-replicon genomes are essential for adaptation but not necessarily for bacterial growth and survival.
While studying the pan- and core-genomes of Burkholderia species, Ussery et al. [14] found that only few hundred genes are conserved among all genomes to form the Burkholderia core genome, whereas more than 40,000 gene families are present in the Burkholderia pan genome. A more recent study of the available genome sequences, focusing on 110 genome sequences, shows that around 35,680 genes belong to pan-gene and 717 to core-gene families [23]. In the latter study, the number of shared genes has significantly dropped upon adding genes from different replicons to the analysis, which indicates the low percentage of genes shared by different genomic replicons of Burkholderia. In the same context, Seo et al. [29] analyzed the genomes of 106 Burkholderia species, representing the different groups, and found that 78,782 genes correspond to pan-genomes, while 587 are core genes conserved in all tested species. By considering the genomes of several strains of three plant pathogenic Burkholderia (B. glumae, B. gladioli and B. plantarii), 12,758 pan-genome genes are present in the tested strains, while 1908 genes are found conserved as the core-genome [29].

Along with the above-mentioned features of Burkholderia genomes, other unique features are related to the genetic plasticity of these bacteria, such as the presence of genomic islands and multiple insertion sequences. Genomic islands refer to foreign DNA regions that have been horizontally acquired and became integrated within the genomes of several Burkholderia species. They have important evolutionary roles and can specify several accessory functions [31]. Multiple approaches have been used to identify these foreign DNAs, such as the analysis of G+C content, which has been found to differ in genomic islands with respect to the rest of the genome [32][33]. Genomic islands vary in their structure and content between Burkholderia species and account for more than 10% of the genomes in most species [24]. Genomic islands linked to pathogenicity and transmission have been extensively characterized. However, the coding capacity of genomic islands is not only associated with pathogenicity and virulence but also with adaptive traits such as symbiosis and metabolism [31]. An example of this is the environmental species Paraburkholderia xenovorans (formerly Burkholderia xenovorans), in which more than 20% of total genes are a recent acquisition and mainly involved in niche adaptation [34].
The genomes of Burkholderia species also contain many diverse insertion sequences that are mainly attributed to genomic rearrangements and replicon fusion and are related to transcriptional regulation [10][24][35][36]. This finding indicates that the presence of multiple insertion sequences in Burkholderia genomes has a role in phenotypic, as well as genetic diversity, by activating and/or inactivating adjacent genetic loci. Target genes may be inactivated or, in the case of adjacent promoter-less genes, activated by the promoters provided by insertion sequences [37]. Furthermore, the presence of multiple copies of the same insertion sequence may drive genetic rearrangements by fusion of two replicons, inversion, deletion, and duplication of the intervening region [38][39]. Accordingly, the transposition of insertion sequences is a very important evolutionary mechanism for the emergence of adaptation capacity and variability in Burkholderia species. A clear example of insertion sequence-mediated genomic alterations is provided by the genome of B. mallei, which is suggested to arise from several deletions and inversions of the Burkholderia pseudomallei genome. Evidence supporting such an assumption includes the presence of insertion sequences bordering most of the breakdown points and the presence of regions from chromosome 1 of B. pseudomallei on chromosome 2 of B. mallei [40]. In the phytopathogen B. glumae, the insertion sequences IS1417, IS1418, and IS1419 are characterized and found to be prevalent among different field strains. Apparently, these sequences may have been horizontally acquired by B. glumae from other related species, as they are also found in species such as B. gladioli and B. plantarii, with IS1417 being the most prevalent [41].

More
© Text is available under the terms and conditions of the Creative Commons Attribution (CC BY) license (http://creativecommons.org/licenses/by/4.0/)
Upload a video for this entry
Information
Subjects: Biochemistry & Molecular Biology
Contributor MDPI registered users' name will be linked to their SciProfiles pages. To register with us, please refer to https://encyclopedia.pub/register :
Mohamed Mannaa
View Times: 34
Revisions: 4 times (View History)
Update Time: 30 Sep 2021
Table of Contents
1000/1000
Hot Most Recent