Submitted Successfully!
Thank you for your contribution! You can also upload a video entry related to this topic through the link below:
https://encyclopedia.pub/user/video_add?id=14739
Check Note
2000/2000
Acne Inversa
Edit
This entry is adapted from 10.3390/cells10082094

Acne inversa, namely, Hidradenitis suppurativa (HS), is a chronic inflammatory skin disease affecting ~1% of the global population. HS typically occurs after puberty, with the average age of onset in the second or third decades of life and with a female predominance. Approximately one third of patients are genetically predisposed. Moreover, lifestyle factors, such as smoking and obesity, play a crucial role in the clinical course of HS.

Due to its chronic nature and frequently occurring relapses, HS has a great impact on the patients’ quality of life, deeply affecting social, working, and psychological aspects [1][2][3][4]. Therefore, early diagnosis is very important for HS patients in order to ensure the best possible course of this stigmatizing and painful disease.

HS is usually localized in the apocrine gland-bearing areas ( Figure 1 ). According to the modified Dessau definition, three diagnostic criteria should be matched: presence of typical lesions, typical locations, and chronicity [5]. Deep-seated painful nodules, abscesses, suppurative sinus tracts or tunnels, bridged scars, and double- and multi-ended comedones (also known as “tombstone comedones”) are described as typical lesions. Commonly, patients experience pain, malodor, a burning sensation, and an itch [6]. Chronicity, defined as two recurrences within the period of six months, is based on a complex pathogenesis underlying the disease; nodules and abscesses can rupture, bleed, and produce purulent discharge. The role of bacteria, infections, and superinfections in HS is still debated and controversial, but they probably have a role in promoting the chronicity of HS [7]. The persistence of the pathology entails the occurrence of dermal contracture and fibrosis of lesional skin. Intertriginous anatomic locations are typically involved, particularly the axillary, infra- and intermammary, inguinal, perineal, perianal, and gluteal regions [8].

HS may less frequently occur in the lower abdomen, suprapubic, retroauricular, nape, eyelids, and scalp [9][10]. Since diagnosis of HS may typically be delayed for years, in order to enhance a correct diagnosis, other factors should be investigated; above all, a family history of HS and history of other follicular occlusion diseases [11]. Moreover, the identification of pathogenic microbes should be evaluated and it could be useful in the therapeutic management, even if a primary infection is not the principal cause of HS [12]. Considering the lack of knowledge to date on the exact pathogenetic mechanism underlying the onset of HS, the phenotypic variants available today still receive criticisms and proposals for change. Three clinical subtypes of HS have been described: axillary-mammary, follicular, and gluteal [13]. According to another classification by van der Zee et al. [14], there are six phenotypes of HS: (i) regular type; (ii) frictional furuncle type; (iii) scarring folliculitis type; (iv) conglobata type; (v) syndromic type; and (vi) ectopic type. Recently, it was suggested to distinguish between a follicular subtype and an inflammatory phenotype, which is usually associated with a worse course of HS [15]. 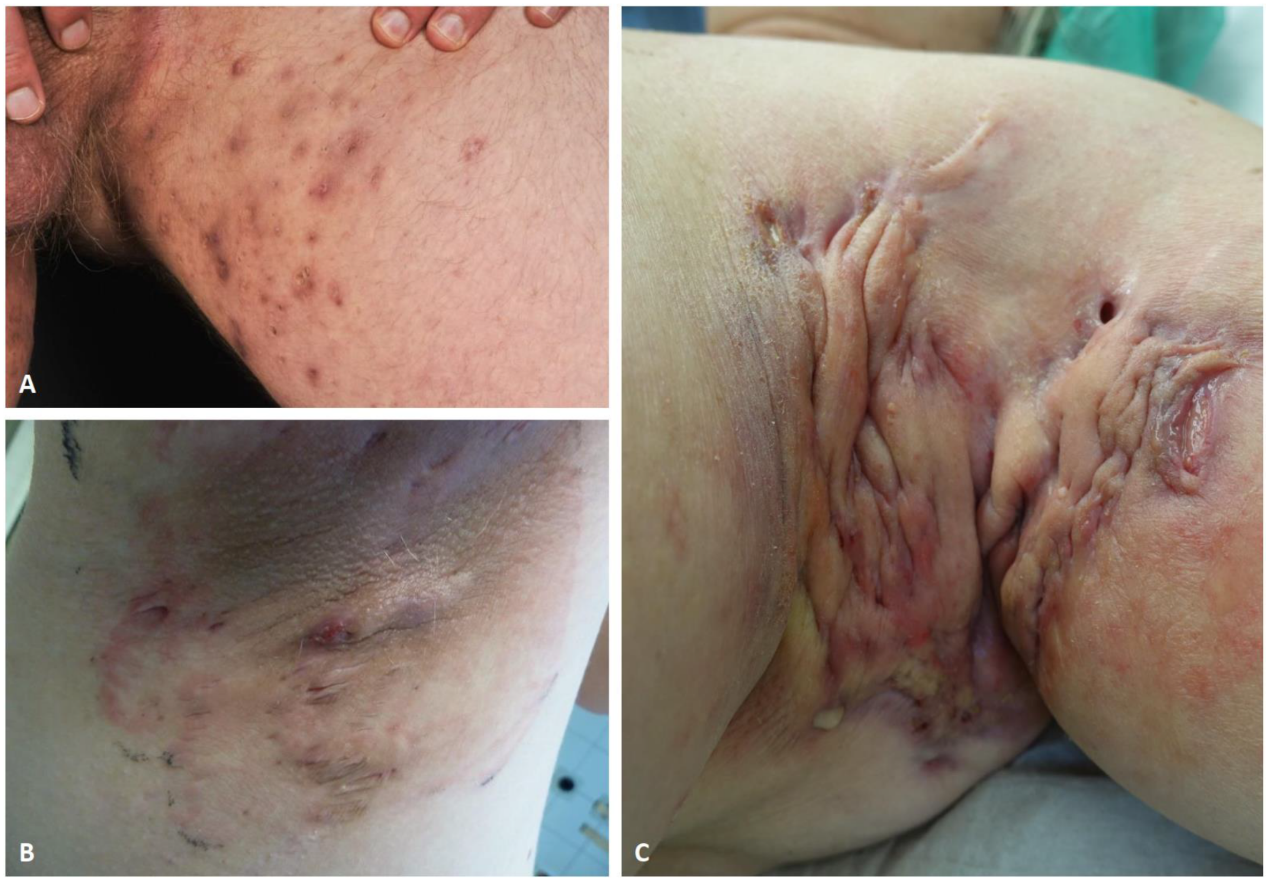 The first severity classification of HS was proposed by Hurley in 1989, categorizing patients into three stages based mainly on the presence of sinus tracts and scarring. The Hurley scoring system is a simple tool, nevertheless it is non-quantitative and static. Indeed, the use of this method in clinical studies may have significant limitations [16]. A more complex and detailed severity scoring method, called the Sartorius Scoring system, better suited to assess disease severity and grade of inflammation, was later proposed. Even though it is more accurate and precise in defining the severity of the disease, the Sartorius score may be time-consuming in routine clinical practice. Still today, the Hurley staging and the Sartorius scoring, together with HS Physician Global Assessment systems are the most commonly used assessment tools [17][18]. In addition, the HS Clinical Response (HiSCR), defined as the reduction in at least 50% of total abscess and inflammatory nodule count, with no increase in abscess count and no increase in draining fistula count relative to baseline, is used mainly to assess treatment effects in trials [19]. Recently, several other clinical measures for assessing HS disease severity were described, including the recently proposed HS Severity Score System (IHS4), the Acne Inversa Severity Index, and the Severity Assessment of HS score, which need further validation [20][21][22]. Ultrasound (US) aids in the diagnosis and assessment of HS disease severity [23]. Different subclinical lesions have been identified and categorized using US, and their recognition is able to modify a therapeutic approach [24]. Wortsman and colleagues proposed a sonographic scoring system for HS (SOS-HS) that combined the results of parameters included in Hurley’s classification with the relevant sonographic findings [23]. Finally, it is well known how HS may have a significant impairment of patients’ quality of life (QoL). Therefore, specific QoL tools have been developed and validated for HS: HiSQOL [25], HSQoL-24 [26], and patient-reported outcome (PRO) questionnaires [27]. Recently, a new graphical tool able to better describe HS burden, the so-called HIDRAdisk, has been introduced [28][29].

Advances in understanding HS pathogenesis are leading to the future expansion of the disease treatment armamentarium [30]. Indeed, several small molecules and biologics are under investigation, for moderate-to-severe HS therapy (Table 1). With phase III trials ongoing, the anti-IL-17 agents bimekizumab (which blocks IL-17 A and F) and secukinumab (which blocks IL17A) are in the most advanced stage of clinical development showing promising results, based on the extensive evidence of the activation and upregulation of the IL-17 pathway in HS inflammation [31]. Even if controversial data regarding possible paradoxical reactions have been described [32], recent studies have showed only partially confirmed effectiveness of secukinumab in the treatment of moderate-severe HS, since HiSCR was achieved only by 41% of patients at week 28 [33]. Bermekimab, which targets IL-1α, has shown resolution of inflammatory lesions and pain in a phase II trials on moderate-to-severe HS while phase II trials are also being conducted for spesolimab which acts on neutrophil recruitment and activation by targeting IL-36 [31].
In addition, modulation of several proinflammatory cytokines and chemokines, such as TNF-α, IL-12/IL-23, CXCL9, and CXCL10, through administration of the oral phosphodiesterase-4 inhibitor apremilast was positively tested in mild to moderate HS in a phase II study [34]. However, drugs which are being tested for HS are very numerous and further include also complement 5a (C5a) and C5a receptor blocking agents (avacopan and IFX-1), janus kinase (JAK), signalling inhibitors (tofacitnib and upadacitinib), anti-CD40 (iscalimab), and anti-iIL23 agents (guselkumab and risankizumab) [31][35]. Furthermore, case reports or case series also show good results for other drugs, such as certolizumab pegol (anti-TNF-α) [36][37][38], tildrakizumab (anti-IL23) [39], ixekizumab (anti-IL17) [40], and brodalumab (anti-IL17 receptor) [41]. In this crowded future treatment scenario, it should be emphasized that HS is a complicated disease that involves both pathological and environmental factors. Hence, treating HS will continue to involve a multidisciplinary approach with monotherapy, often tending not to be efficacious or enough alone. Future treatment should be guided by personalized therapy, biomarkers, and pharmacogenomics (precision medicine), which should drive the therapeutic choice in order to maximize clinical outcomes and limit adverse events following patients peculiarities at genetic and phenotypic level [42].
Table 1. Ongoing and upcoming interventional trials on HS.
ADA, adalimumab; AMP, Allogeneic Micronized Amniotic Membrane Product; CD, cluster of differentiation; G-CSF, granulocyte colony-stimulating factor; IL, interleukin; IRAK4, interleukin-1 receptor associated kinase 4; JAK, janus kinase; LTA4H, leukotriene A4 hydrolase; n.a., not applicable; NPWT+/−i, negative pressure wound therapy with(+)/without(−) instillation; TNF, tumor necrosis factor.

HS is a chronic inflammatory skin disorder with many contributing factors. It can greatly impact patients’ quality of life and social and work activities due to frequent disease relapses with painful and foul-smelling lesions. Therefore, prompt treatment is necessary to reduce the HS burden. Available medicaments are limited, mostly off-label, and surgical interventions are often required to achieve remission. Immunomodulatory therapies targeting specific cytokines might represent an effective option in controlling this condition. Adalimumab, a TNF-α blocker, is the only FDA-approved biological drug for moderate-to-severe HS, whereas the majority of cytokines’ selective inhibitors (e.g., IL-12/23 and IL-17) are still in their early phases. However, clinical efficacy of all novel treatments reported so far is modest. Thus, HS remains a challenging disease to treat, and patients often need a multidisciplinary approach. Future translational studies are needed to better define this enigmatic skin disorder.

More
© Text is available under the terms and conditions of the Creative Commons Attribution (CC BY) license (http://creativecommons.org/licenses/by/4.0/)
Upload a video for this entry
Information
Subjects: Dermatology
Contributor MDPI registered users' name will be linked to their SciProfiles pages. To register with us, please refer to https://encyclopedia.pub/register :
Emanuele Scala
View Times: 91
Revisions: 2 times (View History)
Update Time: 29 Sep 2021
Table of Contents
1000/1000
Hot Most Recent