Submitted Successfully!
Thank you for your contribution! You can also upload a video entry related to this topic through the link below:
https://encyclopedia.pub/user/video_add?id=14572
Check Note
2000/2000
Limosilactobacillus reuteri Fermented Brown Rice
Edit

Oxidative stress has been postulated to play a role in several diseases, including cardiovascular diseases, diabetes, and stress-related disorders (anxiety/depression). Presently, natural plant-derived phytochemicals are an important tool in reducing metabolomic disorders or for avoiding the side effects of current medicinal therapies. Brown Rice (Oryza sativa L.) is an important part of Asian diets reported as a rich source of bioactive phytonutrients.

Oxidative stress is a condition that is caused by an imbalance between antioxidants and free radicals of living organisms. This imbalance occurs due to the excessive production of reactive oxygen species (ROS) or antioxidant deficiency that leads to the damage of aerobic organisms as well as chronic inflammation; referred to as oxidative stress [1]. Lower ROS concentration is important for normal cellular signalling, while excess ROS can cause oxidative damage to DNA, lipids, proteins, and is associated with several chronic diseases [2][3]. The current definition of oxidative stress includes metabolic stress-related pathways that participate in both cellular and extracellular metabolic events. The biology of oxidative stress is extremely complex, with multiple mechanisms at work [4]. Regardless of the mechanism, oxidative stress causes the onset of many diseases including cardiovascular diseases, diabetes, and anxiety or depression which are considered a major public health issue worldwide. As a result, consuming antioxidants to prevent oxidative stress is becoming important for health. Moreover, an increase in the health-consciousness of consumers has increased the demand for nutritional and disease-preventing functional foods, probiotics, prebiotics, and postbiotics. Numerous studies have focused on probiotics, specifically lactobacilli strains, that have the potential to act as antioxidants to protect the host from oxidative stress [5]. Some lactobacilli strains have been found to quench oxygen free radicals using a chemical antioxidant method.
Many studies have been reported that phytochemicals (e.g., polyphenols and phenolic acids) derived from natural plants have the potential to target oxidative stress and inflammatory pathways [6][7]. Rice is a staple food (in many countries) that belongs to the grass family (Oryza sativa). The total worldwide production of rice was about 769,657,791 tonnes in an area of 167,249,103 ha. Epidemiological studies have shown that the low incidence of chronic diseases in rice-consuming regions can be correlated with rice antioxidants [8][9]. The antioxidant activity and phytochemical content of brown rice (BR) have been recorded in several studies. Components such as γ-oryzanol, phenolic acids, gamma-aminobutyric acid (GABA), flavonoids, and γ-tocotrienol contribute to the health-promoting properties of brown rice [10].
Evidence supports the effect of solid-state fermentation (SSF) techniques using lactic acid bacteria (LABs) and fungal strains on antioxidant levels and bioactive properties in a variety of substrates, including barley [11], pearl millet [12], and rice [2]. Many researchers, food scientists, and industrialists use the SSF process to enhance the nutritional quality of food and food products. Biological methods are environmentally friendly, relatively safe, and rely on the use of appropriate and specific microorganisms [13]. Our study aimed to provide knowledge to quantify the quality of these phytochemical antioxidants in whole brown rice to meet the needs of food producers and consumers of rice: (1) to analyze the antioxidant properties of differently fermented brown (FBR) rice over raw brown rice (BR); (2) detection of bioactive compounds in raw BR and different LABs fermented brown rice using ultra-high-performance liquid chromatography quadrupole time-of-flight mass spectrometry (UHPLC-QTOF/MS), and (3) detection of cellular antioxidant activity of the best LAB fermenting bacterial strain (L. reuteri FBR).

In the present research, the phenolic compositions of BR treated with different fermentation bacteria were selected and positively or tentatively identified by UHPLCQ-TOF-MS/MS. Phenolic identification and characterization were achieved by comparing our results with mass spectral literature evidence and cross-referencing it with other available spectral databases, such as Metlin and Metabolomics Workbench. A total of 15 phenolic compounds were tentatively found from our soluble extracts of raw BR, L. reuteri FBR, L. fermentum FBR, and L. plantarum FBR respectively, as shown in Table 1. In the ethanol extract, we identified compounds 1 to 14 at different adduct charges [M − H]− and [M − H]+ which are identified by comparing with mass spectral libraries, XCMS online (Metlin), and Metabolomics Workbench. Heat map analysis was used for clustering phenolic compounds based on their concentrations (Figure 1) where the colour scheme from blue to red shows concentration in decreasing order. 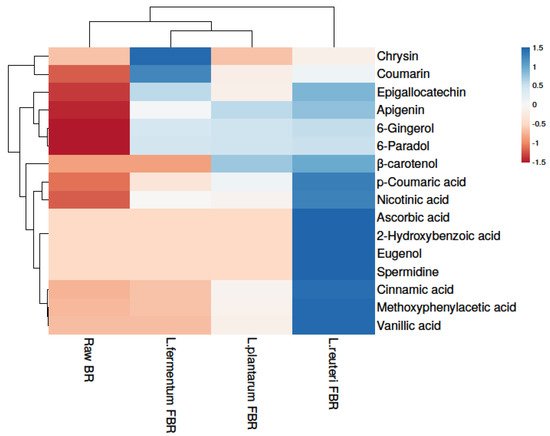 In the growth and development of organisms, amino acids play an important role and can also improve the taste of food. In our present study, a total of 18 amino acids were detected in raw and differently fermented BR samples (Figure 2 and Table 2) which shows statistically significant differences from each other after comparing their levels. Raw BR contained the least number of amino acids, which may be due to more bound molecules with the parent, whereas fermentation leads to an increase in amino acid content. The levels of amino acids were detected highest in the L. reuteri FBR sample which might be strain-specific as fermentation microorganisms produce enzymes that lead to the formation of several metabolites and bioactive compounds from the food matrix [20]. In the ethanol extract, we found levels of some essential amino acids (tryptophan, lysine, methionine, and histidine), as well as certain conditionally essential amino acids (arginine, ornithine, serine, and glutamine), increased drastically after fermentation (Figure 2 and Table 2). The identification was done by comparing with mass spectral libraries, XCMS online (Metlin) and Metabolomics Workbench. In amino acids, L. reuteri FBR also shows the highest number of amino acids content as observed in phenolic compounds. 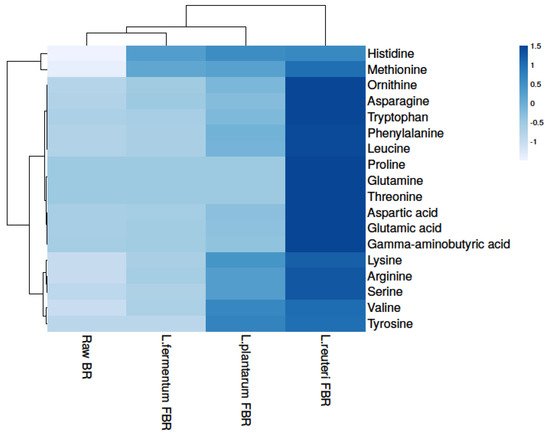 In particular, fermentation has been proposed as a tool for enhancing foods’ nutritional values, both in terms of enhanced bioavailability of bioactive components as well as the production of health-promoting end-products. Due to their proven benefit, in the last decade, short-chain fatty acids (SCFAs) have emerged as some of the most researched compounds. In the present study, 13 fatty acids were detected in raw and different LABs fermented BR samples (Table 3) and fatty acid levels were found to be significantly different in all samples. The results show that the highest levels of fatty acids were found in L. reuteri FBR. Heat map analysis was used for separating fatty acids based on the different concentrations, represented in different shades of green (dark to light) in decreasing order (Figure 3). 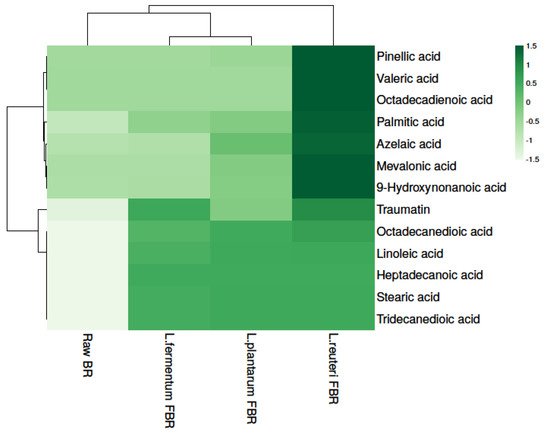 Cytotoxicity is regarded as an important step in determining the suitability and further applications of any food extract. Using the Ez cytox assay kit, the cytotoxic effect of L. reuteri FBR extracts at 0.3–10 mg/mL concentrations was investigated using Caco-2 cell lines. Figure 4 depicts the cell viability results of the extract after 12 h of incubation. It was observed that cell viability was not much decreased after increasing the concentration up to 10 mg/mL. No significant differences were observed in cytotoxicity assay by using 0.3–10 mg/mL concentrations (Figure 4). The extract was observed to be non-toxic after 12 h assay as the extract still shows about 97 per cent of cell viability. Our results were found similar to the results presented by Yue et al. [21]. 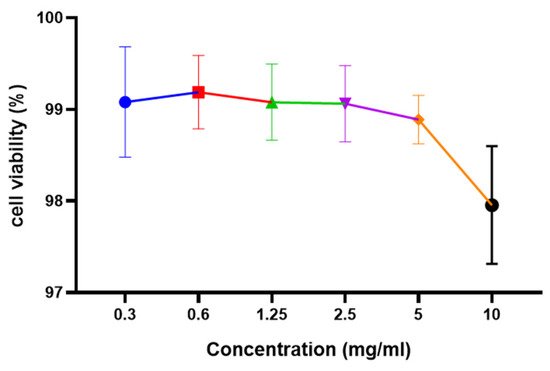 The effect of pretreatment of Caco-2 cells with L. reuteri fermented extract of brown rice on intracellular reactive oxygen species (ROS) was determined using a cell-based assay. The fluorescent probe DCFH-DA is used as an indicator of ROS and oxidative stress in our study. The nonionic and nonpolar DCFH-DA probe diffuses passively into cells before being hydrolyzed by intracellular esterases to form nonfluorescent 2′,7′-dichlorofluorescein (DCFH). Later in the presence of ROS, DCFH that is trapped inside cells is oxidized into fluorescent 2′,7′-dichlorofluorescein (DCF) [22]. When the cellular antioxidant defence system fails to compensate for ROS production, oxidative stress occurs. This reaction can be slowed down using bioactive compounds, preventing the generation of DCF. Following the uptake of antioxidant compounds can be accomplished on the cell membrane surface or within the cell [23]. We evaluated the effect of our L. reuteri FBR extract against oxidative stress in Caco-2 cells. In our study, ABAP was chosen as an intracellular oxidizing agent to simulate oxidative stress in cells. 600 µmol L−1 ABAP was chosen as the optimal concentration to induce oxidation. As represented in Figure 5A, CAA values in L. reuteri FBR extract were observed to be 5.7 times higher than the raw BR sample at a concentration of 1mg/mL. Our results indicate that extracts reduced ROS levels at rest in a dose-dependent manner (Figure 5B); CAA values were increased with concentration (0.5 mg/mL to 5 mg/mL) from 49.50 ± 1.67% to 72.49 ± 1.23%. The strength of inhibition strongly followed a curvilinear pattern as L. reuteri FBR extract concentrations increased. A similar effect was previously observed in the study of Grauzdytė et al., where they observed Phyllanthus phillyreifolius extracts in HEK-293 cells [24], and the study of Kellett et al. [25] in Caco-2 cells.

In our study, we discovered that L. reuteri FBR had higher antioxidant activity as well as a higher concentration of phenolics and flavonoids among all LABs used for the study. This shows the ability of L. reuteri as a promising fermentation strain to increase the bioavailability of cereals or grains in producing health-promoting functional materials. L. reuteri fermentation improves phenolic constituents and antioxidant activity of BR, improves food quality, and confers organoleptic characteristics. Furthermore, we discovered that L. reuteri FBR enhanced the production of essential amino acids and fatty acids using untargeted metabolomics. The present study has provided information on bioactive compounds and antioxidant activities as well as the cellular antioxidant capacities of L. reuteri FBR. These data are required for the processing of the whole BR and its products for the pharmaceutical and food markets. As a result, new strategies and collaborations among industry, researchers, and relevant agencies are required to publicize whole grain consumption. Additionally, the current research is part of ongoing efforts to increase the added value of brown rice production and use in the prevention of human chronic diseases caused by oxidative stress. Moreover, these findings also make this sample a promising material for the development of health-promoting functional food. Whereas, it is necessary to perform more research into the mechanisms of different types of fermentation (solid and liquid-state) on single/pure phenolic compounds and antioxidant properties. Furthermore, in vivo models should be used to study the bioavailability and absorption of phenolic compounds in the gut.