Submitted Successfully!
Thank you for your contribution! You can also upload a video entry related to this topic through the link below:
https://encyclopedia.pub/user/video_add?id=14418
Check Note
2000/2000
Sertraline in Hemodialysis Patients
Edit
This entry is adapted from 10.3390/medicina57090949

Depression and anxiety are the most common psychiatric disorders in end-stage renal disease (ESRD) patients treated with hemodialysis (HD) and may correlate with lower quality of life and increased mortality. Depression treatment in HD patients is still a challenge both for nephrologists and psychiatrists. The possible treatment of depressive disorders can be pharmacological and non-pharmacological. In our article, we focus on the use of sertraline, the medication which seems to be relatively safe and efficient in the abovementioned population, taking under consideration several limitations regarding the use of other selective serotonin reuptake inhibitors (SSRIs).

Depression and anxiety are the most common psychiatric disorders in end-stage renal disease (ESRD) patients treated with hemodialysis (HD). Their prevalence is increasing in recent years [1], reaching the rate of 20–40% for depression [2][3] and 20–52% for anxiety [4], depending on the methodological approach. According to the studies, these psychiatric disorders may correlate with lower quality of life, increased hospitalization rate, suicidal behavior, hemodialysis nonadherence, and increased mortality [5]. Despite the number of studies on this issue, major depressive disorder (MDD) in ESRD patients is still underdiagnosed, and its treatment is not optimal [6] [Table 1]. Anxiety disorders seem to be overlooked even more often [7], which is probably associated with significant overlapping of symptoms with depression [8]. As initiation of dialysis is a large change in everyday functioning with a potential to induce or worsen psychiatric symptoms, screening for depression [9] and anxiety is suggested at the beginning of renal replacement treatment.

Table 1. Comparison of depression in ICD-10 and DSM-5 classifications.
The possible treatment of depressive and anxiety disorders can be pharmacological and non-pharmacological. The first choice drugs for both of the above are selective serotonin reuptake inhibitors (SSRIs), including citalopram, escitalopram, fluoxetine, fluvoxamine, paroxetine, and sertraline Table 2 [12][13]. While their administration is widely considered to be safe and effective in ESRD patients, further studies are still needed in this field [14]. Non-pharmacological interventions may include psychotherapy, mindfulness meditation, and frequent HD [15].
Table 2. Antidepressive agents with serotonin reuptake transporter (SERT) inhibition activity.
In our article, we focus on the use of sertraline due to several limitations regarding the use of other SSRIs in ESRD patients. Fluoxetine and fluvoxamine are considered to be less efficacious [16]. Moreover, fluvoxamine has a significant impact on liver metabolism of other drugs. Administering citalopram and escitalopram bears the risk of increasing QTc interval in doses larger than 20 mg and 10 mg, respectively. These doses have been set as maximum for elderly patients [17][18], limiting therapeutical options with these drugs in many ESRD patients. While there have recently been voices raising doubts about decisions limiting the use of citalopram and escitalopram [19], these restrictions still stand. In view of the above, sertraline may seem like a relatively safe and efficient medication. However, before administering, one should consider several side effects particularly significant in the treatment of ESRD patients. These adverse effects, along with specific benefits, are discussed below in Table 3 and and Figure 1. 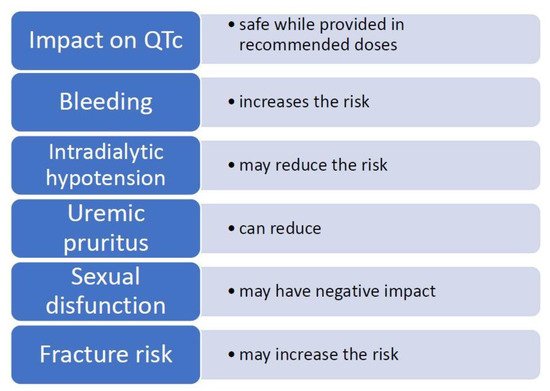 2. Sertraline—General Properties of the Medication

Studies evaluating sertraline’s safety and efficacy in ESRD patients performed so far usually had small samples and lacked placebo control [39]; therefore, in further parts of this article, references are also made to data from the general population. The European Renal Best Practice (ERBP) guidelines suggest that trials with SSRIs in patients who meet criteria for moderate Major Depressive Disorder (MDD) should last for 8–12 weeks, after which the effect of the treatment should be evaluated [43]. This is rather inconsistent with the psychiatric clinical practice when the first evaluation for depressive and anxiety patients is usually done after 4 weeks with considerations of temporizing, increasing the dose, switching to another antidepressant, or combining several drugs in patients with minimal response or safety issues [44][45].
Before starting the treatment with sertraline, no specific medical tests are required [46]. To minimize side effects, psychiatrists usually start with a subtherapeutic dose of 25 mg for one week with an increase to 50 mg after this period. These means of precaution should be especially considered in patients with coexisting anxiety, in advanced age, and those more susceptible to side effects. While doses up to 300 mg have been used, the maximum dose is considered to be 200 mg. ERBP guidelines do not suggest any need to change the dosing in stages 3–5 of chronic kidney disease (CKD), but some studies suggest that smaller doses of sertraline may be required in ESRD patients, yet the post-hemodialysis supplementation is suggested to be unnecessary [47]. The effect of the treatment can be usually seen after 4–6 weeks. The drug should be taken daily. While most psychiatrists and patients prefer it to be taken in the morning, some patients may experience sedation, and an evening dosage would be more appropriate. The general rule is that sertraline should be taken every day in the same regimen (time of day, dose splitting, with or without food). Due to a fairly long half-life time (66 h in the general population when including its less active metabolite, norsetraline) [48], missing a single dose should not result in any withdrawal side effects. This is also the reason why this drug is relatively easy to discontinue. Sertraline is a moderate inhibitor of CYP2B6 and CYP2D6 with a dose-dependent effect of increasing other drugs metabolized through these pathways [49]. Effect on other CYP450 subunits is not clinically significant, and its interactions are less potent than these of fluoxetine, fluvoxamine, or paroxetine.
Sertraline is considered to be safe to use. The adverse effects that seem to be more common while using sertraline compared to other SSRIs are diarrhea and activation [50]. In some cases, drowsiness, headache, or sexual dysfunctions may appear [50]. One should also keep in mind the antiplatelet effect of sertraline, which, while in some cases beneficial [51], may be an issue in patients with greater bleeding risk [52]. Modification of antidepressant treatment needs to be considered in some patients [53]. Regularly observed practice is also an adjustment of antiplatelet therapy dose (for instance, by reducing acetylsalicylic acid dose from 150 mg to 75 mg) after adding sertraline. This course of action, however, has no support in current literature.
Adverse effects during sertraline administration are usually mild and can be alleviated by changing the treatment regimen (lowering the dose, changing the time of administration, splitting the dose into BID (two times a day) or TID (three times a day), adding low doses of trazodone for sexual dysfunctions or insomnia, etc.) [54][55].
The general rule during antidepressant treatment is that we should struggle to achieve full remission and continue administration of the drug for the maintenance period of at least 6 months before any attempts of down-titrating or discontinuing the medication [56].

More
© Text is available under the terms and conditions of the Creative Commons Attribution (CC BY) license (http://creativecommons.org/licenses/by/4.0/)
Upload a video for this entry
Information
Subjects: Pharmacology & Pharmacy
Contributor MDPI registered users' name will be linked to their SciProfiles pages. To register with us, please refer to https://encyclopedia.pub/register :
Alicja Kubanek
View Times: 72
Revisions: 2 times (View History)
Update Time: 23 Sep 2021
Table of Contents
1000/1000
Hot Most Recent