Submitted Successfully!
Thank you for your contribution! You can also upload a video entry related to this topic through the link below:
https://encyclopedia.pub/user/video_add?id=14400
Check Note
2000/2000
Resistant Starches and Non-Communicable Disease
Edit
This entry is adapted from 10.3390/foods10092062

Resistant starch (RS) is the starch fraction that eludes digestion in the small intestine. RS is classified into five subtypes (RS1–RS5), some of which occur naturally in plant-derived foods, whereas the others may be produced by several processing conditions. The different RS subtypes are widely found in processed foods, but their physiological effects depend on their structural characteristics.

Non-communicable diseases (NCDs) are chronic disorders, which tend to be of long duration. NCDs are due to a combination of genetic, physiological, environmental and behavioral factors, including unhealthy diets, physical inactivity, tobacco smoke or alcohol use. NCDs can be preventable by nutrition and the adoption of an active lifestyle [1][2]. Nutritional habits and physical activity represent a winning combination to counteract the rising burden of NCDs. Both unhealthy diets and a lack of physical activity are determinants to develop obesity, which in turn is linked to: (i) rise of blood pressure, (ii) increase of blood glucose and (iii) elevation in blood lipids , i.e., all conditions leading to the development of metabolic diseases. Therefore, obesity is strongly associated with chronic inflammation, which in turn leads to metabolic and cardiovascular diseases and even cancer [3]. On this basis, understanding the mechanisms leading to obesity is essential to develop preventive strategies and new treatments [4][5]. Food intake plays a critical role in the development of metabolic diseases. Recently, an investigation on European children from six different nations has highlighted that the consumption of fiber-rich foods does not meet present recommended daily intake guidelines [6]. The authors have found out a weak but significant correlation between an increase in BMI and a decrease in consumption frequency of wholegrain cereals and wholemeal products (bread, cereals, biscuits, pasta, rice). Furthermore, adopting the consumption of high-fiber foods in early childhood can delay the initiation of impaired condition [6][7]. These results are mostly driven by Italy (lower cereals consumption frequency). Angel Keys was the first to describe the Mediterranean Diet (MeD) as such and to present it to the popular thoughts as it is today. He was a biologist and physiologist who focused his studies on the dietary habits of people living in the South of Italy. Following the joint candidacy of Italy, Spain, Greece and Morocco, succeeded by Cyprus, Croatia and Portugal, the MeD was recognized by UNESCO, WHO and FAO. Such a diet varies by country and region; therefore, it has a range of definitions. It usually includes a low intake of meat and eggs, a moderate intake of dairy products and milk, and a large consumption of vegetables, fruits rich in phenols, fish, olive oil and seeds, rich in unsaturated fats [8][9]. Furthermore, legumes, whole cereals, potato, bread and rice are indicated in the Mediterranean food pie chart ( Figure 1 ). 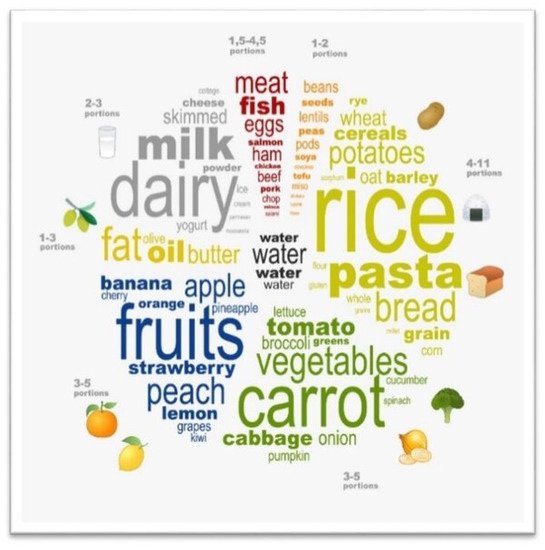 In recent years, the gut microbiota has been widely investigated, and its imbalance, due to antibiotics use [10], has been related to many disorders, including inflammation and oxidative stress, which underlie several chronic diseases, such as obesity, type 2 diabetes and chronic kidney disease [11]. Several reports have evidenced that a prebiotic supplemented diet can healthily regulate the gut microbiota, thus relieving disorders due to its imbalance. Prebiotics comprises non-digestible dietary soluble fiber, which can be used by the gut microbiota for fermentation. In this context, RS can act as a substrate for microbial fermentation in the large intestine [11] by supplying an energy source and fermentative products, such as short-chain fatty acids (SCFAs) in their anionic forms, in such a way RS is able to modulate microbial growth and could influence colonic health ( Figure 2 ). On this basis, RS is believed to be a prebiotic and to influence the GI of foods favoring a lower intestinal absorption of glucose, even in the presence of polyphenols that in turn inhibits enterocytic starch digestion enzymes [12] 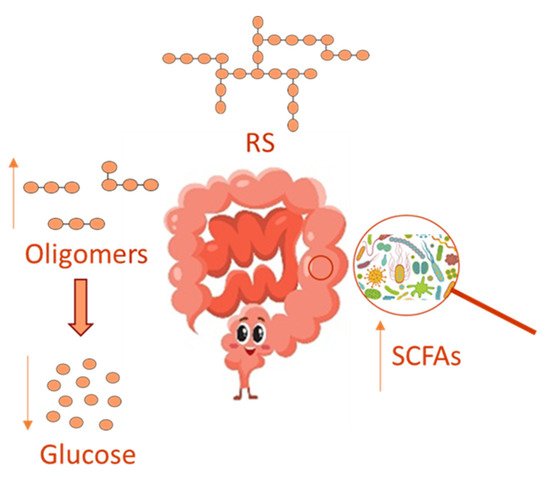 When compared to food containing only readily digestible starch, the rate of digestion of RS-containing foods in the small intestine is substantially slower. As a result, consumption of such food leads to a sustained and lower level of glucose release [13]. This effect is reflected by the GI, a ranking system that organizes different food products based on the glycemic response to food consumption [13]. Researchers discovered a decrease in starch digestibility in treated food compared to untreated food after producing retrogradation in test meals [14]. They also observed a slower rise in blood glucose levels in human subjects upon consuming treated food when compared to those consuming untreated food [14][15]. Several studies have reported that potatoes generally have medium to high GI, which has often negatively impacted their consumption, but such studies have overlooked the many nutritional and health benefits of potatoes [16][17]. Interestingly, the GI varies depending on the potato variety, origin, maturity and processing methods, which can alter the starch digestibility of consumed foods. Hence, the concept of glycemic load (GL) was developed to simultaneously describe the quality (i.e., GI) and quantity of carbohydrates in a meal or diet [18][19]. Potato starch consists of 70–80% amylopectin, which is a highly branched, high molecular weight biopolymer. Amylose represents approximately 20–30% of starch, and it is a relatively long, linear, α-glucan with only a few branches. The relative proportion of amylose and amylopectin is important, given that amylose acts as a restraint to swelling and, upon cooling, it forms retrograded starch more readily [20][21][22]. Other than total starch, structure and moisture content [23], as stated above, other factors can also impact the glycemic response, including the growing conditions, maturity of the potato variety and cooking methods [24]. Potato varieties, maturity level, starch structure, methods of food processing and composition of the meal affect the GI of potatoes. Boiling, baking, microwave or oven cooking, extrusion and frying result in diverse degrees of gelatinization and starch crystallinity in potatoes. Cooling or storage after processing potatoes significantly reduces their GI because of the retrogradation of starch molecules. Although beneficial effects of resistant starch consumption have been observed, the current results of studies on the underlying molecular mechanisms in both animals and humans are not yet conclusive. Additional research efforts are necessary in order to reach a better understanding of the effects of habitual RS consumption on glycemic control.

The mammalian gastrointestinal microbiota makes important contributions to the health of the host, including immune system development, nutrient metabolism and absorption, drug metabolism as well as protection against infection [25]. An altered microbiota (dysbiosis) has been associated with human diseases, such as diabetes, obesity, inflammatory bowel diseases, fecal occult blood and colorectal cancer [25][26][27]. By the way, diet is also considered a key modulator of the composition and function of the gut microbiota. Over the past few decades, the dietary intake of RS has been investigated. RS is a type of fermentable fiber considered a prebiotic since it can reach the large intestine, in which gut bacteria ferment it. RS fermentation leads to SCFAs production and pH reduction in the proximal large intestine. It has long been known that diet influences the microbial communities of the gastrointestinal tract. Although studies to understand how different classes of RS can affect microbiota are limited, it is clear that high-fiber diets greatly modulate the composition of mammalian microbiota [28]. Among the different classes of resistant starches, RS1–RS5 ( Table 1 ), type 3 (RS3) is endowed with the strongest prebiotic properties [29]. Recent studies have explored the comparative physiological effects of diverse types of RS, investigating RS-induced changes in the microbiome that might be substantial in health and disease. Bacteria in the large intestine can be exposed to as much as 20 g of RS per day in humans [30]. RS may exert protective effects through broader mechanisms associated with fermentation. Acetate, propionate and butyrate are the most abundant anionic form of SCFAs generated from colonic microbial metabolism. SCFAs play a key role in the regulation of the inflammation process; contextually, they induce protective effects by stimulating or lessening inflammatory cytokines production, as well as by inhibiting or facilitating immune cells recruitment [31]. Furthermore, the fermentation of RS in the colon results in the production of gases (methane, hydrogen and carbon dioxide), small amounts of organic acid in its anionic form (lactate, succinate and formate), branched SCFAs either in anionic form such as valerate and butyrate. This latter is mainly obtained from the fermentation of RS2 than that of other RSs; notably, it has displayed interesting anti-inflammatory properties [30][32][33]. In particular, RS2 can promote a greater growth of bacteria belonging to the families of Bifidobacteriaceae and Lactobacillaceae , which are known to reduce inflammation [32]. Additionally, RS2 supplementation led to an increase in the gut level of Faecalibacterium ; this prompted the authors to hypothesize a bacterial involvement in the anti-inflammatory effect exerted by the prebiotic fiber [33]. A future research direction to better assess gut/fecal microbial composition and serum concentration of anionic form SCFAs before and after RS2 intake could be represented by rodent models [34][35].

Table 1. Classification of RS and example of foods rich in RS.

More
© Text is available under the terms and conditions of the Creative Commons Attribution (CC BY) license (http://creativecommons.org/licenses/by/4.0/)
Upload a video for this entry
Information
Subjects: Nutrition & Dietetics
Contributor MDPI registered users' name will be linked to their SciProfiles pages. To register with us, please refer to https://encyclopedia.pub/register :
Erika Cione
View Times: 49
Revisions: 2 times (View History)
Update Time: 22 Sep 2021
Table of Contents
1000/1000
Hot Most Recent