Submitted Successfully!
Thank you for your contribution! You can also upload a video entry related to this topic through the link below:
https://encyclopedia.pub/user/video_add?id=14385
Check Note
2000/2000
Probiotic Endophytes for Banana
Edit
Upload a video
This entry is adapted from 10.3390/microorganisms9091805

Endophytic bacteria reside in the internal tissues of the plant, establishing a strong symbiotic relationship that promotes plant growth and provides protection in exchange for a niche to carry out its life cycle. The nature of their mutualistic association depends on their location in the plant tissue, either intercellularly or intracellularly. Since they promote plant growth, increase crop yields, and afford disease resistance under harsh environmental conditions, endophytic bacteria are considered plant probiotics.

In 2017, bananas were ranked 12th among the top 20 commodities globally, reaching a record production of 116 million tons. Currently, around 5.2 million hectares in 135 countries are dedicated to banana production [1]. Additionally, banana is the fourth most important crop, often recognized as a staple in food security and cash crop for generating income [2]. The most common and widely exported banana is the Cavendish (AAA) group of dessert bananas (Lacatan, Robusta, Valery, Giant Cavendish, Grand Naine, dwarf Cavendish, Petit Naine, and dwarf Parfitt) that account for about 43% of global banana production [1].

Cavendish bananas are grown in nutrient-limited soils under excessive nitrogen (N) fertilization and frequently water-limited conditions [3][4]. In addition, pathogenic fungi, which are becoming increasingly virulent and resistant to fungicides, threaten banana production in major growing areas [4][5][6][7]. Banana plants have a relatively high nutrient and water demand compared to other crops; therefore, applications of high dosages of potassium (K) and N are required in banana orchards to replenish the nutrients exported from the soil to the plant and fruits [8]. It has been reported that an average of 400 Kg N ha −1 Y −1 is used in the Caribbean and Latin American banana orchards, resulting in severe contamination of water bodies [9].

Endophytic bacteria reside in the internal tissues of the plant, establishing a strong symbiotic relationship that promotes plant growth and provides protection in exchange for a niche to carry out its life cycle [10]. The nature of their mutualistic association depends on their location in the plant tissue, either intercellularly or intracellularly [11][12]. Since they promote plant growth, increase crop yields, and afford disease resistance under harsh environmental conditions, endophytic bacteria are considered plant probiotics [13][14][15][16][17].

Plants have distinct microenvironments that harbor complex and diverse microbial communities, considered a second genome [18]. Plants have selected these microbial communities over millions of years of co-evolution to form a plant-specific microbiome, resulting in various interactions between plants and microorganisms [19]. Additionally, beneficial and detrimental microbial effects on plants can directly or indirectly affect microorganism-microorganism interactions [20].

Beneficial microbes (i.e., rhizospheric and endophytic) improve the acquisition of soil nutrients and tolerance to abiotic stresses and combat pathogens. These functions promote plant growth and consequently increase the ecological fitness of the natural environmental or agricultural system [21]. Endophytic microbes are a subset of the plant microbiome. This group of diverse and heterogeneous bacteria can easily enter plant roots through different mechanisms [22]. It is important to point out that the nature of plant-endophyte interactions can range from mutualism to pathogenicity. It was previously demonstrated that the type of interaction depends on abiotic and biotic factors, including the genotypes of plants and microbes, environmental conditions, and the dynamic networks of interactions within plant biomes [23].

More recently, microbiologists have been using high-throughput sequencing (HTS) methods to explore the structure of bacterial communities, identifying members that cannot be easily cultured in the laboratory [24][25][26], including phyla such as Planctomycetes, Verrucomicrobia, and Acidobacteria [27][28]. A significant proportion of the bacterial genera reported as endophytic is commonly found in the rhizosphere, suggesting that the endophytic microbiome may be a subpopulation of the rhizospheric bacteria [10].

In recent years, significant steps have been taken towards understanding many facets of the plant microbiome and their interactions. With advances in sequencing technologies and analytical tools, we have learned about plant-microbial and microbial-microbial interactions and how microbes are recruited from the environment and assembled into a defined structure. These interactions are widely dependent on soil type, host genotype, and agricultural management [38]. Indeed, these types of studies have altered our perception of the complexity and dynamics of plant-microbe interactions.

Plant microbiomes have been studied by inferred functions derived from descriptive genetic data (metagenomics) and/or combined with metabolomics and culture-dependent approaches to develop synthetic microbial communities (SynComs) [39][40][41]. SynCom research and development involves employing microbial candidates as new functional probiotics for plants [40][42]. According to an analysis of 30 publications, Marin et al. [43] showed that SynComs could range from 3 to 190 microbial strains, mainly composed of bacteria belonging to the phyla Proteobacteria, Actinobacteria, Firmicutes, and Bacteriodetes.

After assembling the microbial consortium, it is then tested in plants to evaluate whether the functions and structure mimic the observed function and structure of the plant microbiome under natural conditions in the time and space of a multidimensional and complex system [38][43]. This approach reduces the complexity of the microbial community without modifying the original interactions among microbes and the host plant (Reviewed in [42][43]). A significant advantage of SynComs is that they are composed of adapting microbial communities with defined and predictable traits for crop management, producing effects that a single microbe could not generate. Additionally, due to the plasticity of SynComs in the laboratory, it is possible to understand how the plant alters its behaviors and genetic responses by removing one or several members of the consortium [43].

Plant microbiome studies are gradually considering the synergistic and cumulative effects of SynComs on different microorganisms, expanding our knowledge of plant diseases [44][45][46][47][48][49][50]. SynComs have also been designed to elucidate the specific function of plant microorganisms, including nutritional aspects (e.g., nitrogen fixation by diazotrophs) [51] and mineral assimilation (e.g., phosphate and organic nitrogen) [52][53]. Thus, the concept of SynComs for creating microbial consortia under laboratory conditions is a promising ecological strategy for developing more resilient and productive crops.

4. The Banana Endophytic Microbiome or Endophytome: History, Diversity, Functionality, and the Cry for Help Phenomena

These studies demonstrate that the method of analysis, cultivar, and microhabitat (root, pseudostem, and leaf) are influential factors for endophytic bacteria diversity in banana plants. Figure 1 shows the relative abundance of endophytic bacteria that have been reported in some studies mentioned in this review. The studies were carried out in different tissues of banana plants (Dwarf Cavendish and red banana AAA) and Prata Anã (AAB) varieties grown in commercial plantations exposed to different stress factors (2A). We can also observe the influence of the analysis method (cultivated and non-cultivated) on the distribution of the endophytic microbial community (2B). 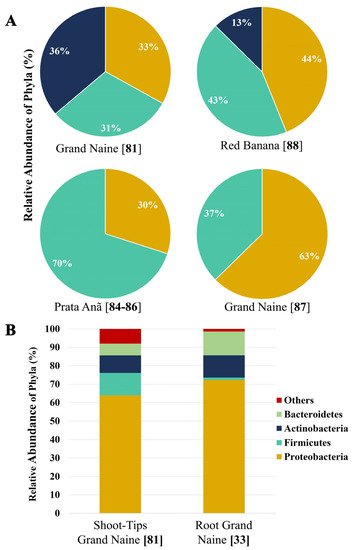 Figure 1. Relative abundance of cultivable and non-cultivable endophytic bacteria at phylum level from different cultivars of banana. (A) Comparative analysis among cultivable endophyte populations of shoot tips [54], roots under organic management [55], and red banana leaves of banana Cavendish AAA [55] and the Grand Naine under organic management. In the three tissues, the Proteobacteria was the predominant phylum. Leaves lacked members of the Actinobacteria phylum. Interestingly, Prata Anã recruits more Firmicutes to the roots. (B) Non-cultivable analysis of root endophytes. Both studies showed that Proteobacteria is the main microbial phylum in Cavendish bananas. The averages were calculated using data from previously published studies [56][54][57][58][59][55][60].

Previously, Rudrapa et al. [61] showed that malate efflux induces B. subtilis attraction to Arabidopsis roots during Pseudomonas syringae infection. The attracted B. subtilis triggered systemic resistance and protected plants against P. syringae . The “cry for help” concept was recently supported by a field experiment in which durum wheat naturally infected by Fusarium graminearum was enriched with Stenotrophomonas rhizophila in the rhizospheres and root endospheres to alleviate fungal disease [62]. This protection mechanism has not been described in banana plants. However, evidence shows that the microbial community shifts in banana plants infected by Fusarium , indicating a “cry for help” mechanism.

In another study, previously mentioned in this review [55], a probiotic formulation of endophyte bacterial strains isolated from banana roots under organic management was developed. After a strict selection based on PGP-properties, two strains of Pseudomonas ( P. plecoglossicida and P. taiwanensis ) were found to retard foliar necrosis symptoms in field trials. The control plants presented necrosis symptoms from the first leaf (i.e., the youngest leaf). In contrast, plants treated with endophytic bacteria only showed necrosis symptoms at the fourth leaf (i.e., older). Furthermore, the fruit and the bunch’s average weight was higher in banana plants treated with the endophyte probiotic bacteria.

Our research group has studied black Sigatoka from two scientific approaches to reduce the impact of black Sigatoka in bananas: a) the biochemistry and physiology of P. fijiensis and b) the endophytic bacteria populations and their usefulness as probiotics in commercial plantations of Colima and Jalisco, Mexico [5][14][63][64][65]. First, we proposed E. cloacae , which is widely distributed in banana plants and seeds [14][66][67][68], as a keystone member of the microbial community of these plants. This endophyte serves as a plant-growth promoter, contributes to banana plant nutrition and imparts fungal disease tolerance [56][69][70][71].

More
© Text is available under the terms and conditions of the Creative Commons Attribution (CC BY) license (http://creativecommons.org/licenses/by/4.0/)
Upload a video for this entry
Information
Subjects: Microbiology
Contributor MDPI registered users' name will be linked to their SciProfiles pages. To register with us, please refer to https://encyclopedia.pub/register :
Miguel Beltran-Garcia
View Times: 40
Revisions: 2 times (View History)
Update Time: 22 Sep 2021
Table of Contents
1000/1000
Hot Most Recent