Submitted Successfully!
Thank you for your contribution! You can also upload a video entry related to this topic through the link below:
https://encyclopedia.pub/user/video_add?id=14171
Check Note
2000/2000
Properties of Anthocyanins
Edit
Upload a video
This entry is adapted from 10.3390/nu13082831

Anthocyanins are a subgroup of flavonoids, which are a prevalent and numerous class of secondary plant metabolites, that all share the C6-C3-C6 flavan or 2-phenyl-benzodihydorpyrane skeleton.

Anthocyanins are a subgroup of flavonoids, which are a prevalent and numerous class of secondary plant metabolites, that all share the C6-C3-C6 flavan or 2-phenyl-benzodihydorpyrane skeleton (Figure 1A). In plants, they are used for pigmentation, UV-filtration, protection from reactive oxygen species or nitrogen fixation. Other subgroups, based on chemical structure, are anthoxanthins, flavanones, flavanolols, or flavans. 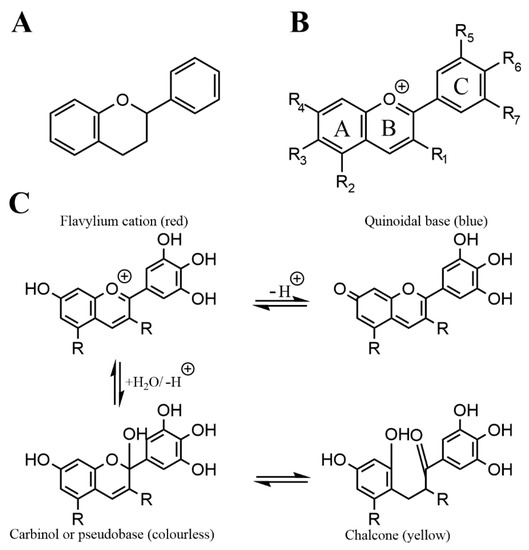 Figure 1. Chemical structure of flavan (A), the general anthocyanin structure (B) and the structure and color change of anthocyanin with pH in aqueous solution (C).
To date, there are more than 500 different anthocyanins known, which makes them the biggest group of water-soluble plant pigments [1]. Their name derives from the greek anthos (flower) and kyanous (dark blue). They are based on the flavylium cation, which makes them electrically charged at low pH; because of this, there is a color change based on pH, which can be used as a pH indicator. Their chemical structure and the resulting color based on pH is shown in Figure 1C.
Anthocyanins can be further divided based on their substitutions at the skeleton, especially at ring B, or the glycosylation at ring A and C (Figure 1B). Without a sugar attached, they are called anthocyanidins, the most common ones being pelargonidin, cyanidin, peonidin, delphinidin and malvidin [2]. Main sugar moieties are the monosaccharides glucose, arabinose, galactose as well as the disaccharide rutinose (6-O-α-l-rhamnosyl-d-glucose) [3]. Generally, Cyanidin is the most abundant anthocyanidin and Cyanidin-3-glucoside the most common anthocyanin [4][5].
A further description of the chemistry of anthocyanins can be found e.g., at Mattioli et al. (2020) [6].
Natural dietary sources of anthocyanins are dark berries such as bilberries, blackberries or blackcurrants and red berries such as strawberries, cranberries or redcurrants [4][7][8][9]. Other common fruit sources are cherries, pomegranate and red grapes. In vegetables, they can be found in beetroot, purple corn, red cabbage, black carrots or eggplant [4]. In dark berries, a common and frequently consumed source of anthocyanins, the concentration ranges from around 80 up to 700 mg/100 g fresh weight [4][7][8]. However, these levels vary depending on growth conditions and strain [10][11]. The anthocyanin composition also varies between plants and species. Blackcurrants, for example, comprise of four different anthocyanins (glucoside and rutinoside of cyanidin and delphinidin), whilst bilberries comprise of 15 different anthocyanins (arabinoside, galactoside and glucoside of cyanidin, delphinidin, malvidin, peonidin and petunidin) [5]. Table 1 shows the anthocyanin content in common fruits and vegetables [4][7][8][12][13][14][15][16][17][18][19][20][21][22].
Table 1. Common natural food sources for anthocyanins and their respective anthocyanin content.

Since anthocyanins, in fruits, vegetables or supplements, are taken up orally, they encounter several different chemical and biological milieus until they are absorbed or excreted and are chemically or enzymatically metabolized. The absorption pathway of anthocyanins seems to deviate compared to the pathway of other flavonoids [23][24]. McGhie and Walton [2] stated a comparatively low bioavailability since only 0.1% of oral cyanidin-3-O-glucoside could be found in urine. HPLC as a detection method is debatable since its low pH leads to cation formation in anthocyanins. Manach et al. reviewed studies using anthocyanin amounts ranging from 150 mg to 2 g. Blood plasma concentration of just 10–50 nM were found and retrieval from urine differed from 0.004% to 0.1% [24].
Czank et al. (2013) as well as de Ferrars et al. (2014) used 500 mg 13C isotopically marked cyanidin-3-O-glucoside (C3G) and collected biological samples over 48 h [25][26]. Mean percentage of recovered 13C in urine, breath and feces was 43.9 ± 25.9%. Relative bioavailability was 12.38 ± 1.38% (5.37 ± 0.67% excreted in urine and 6.91 ± 1.59% in breath). They also found a total of 24 labeled metabolites. These included phase II conjugates (cyanidin-glucuronide, methyl cyanidin-glucuronide, and methyl C3G-glucuronide), but also degradants (proto catechuic acid and its own phase II conjugates (i.e., vanillic acid or isovanillic acid), and phloroglucinaldehyde), hippuric acid, and ferulic acid. While C3G serum concentration peaked around 2 h post-consumption, its degradants peaked approx. 6 h post-consumption. Other metabolites, such as vanillic acid or ferulic acid, reached their maximum concentration 11–16 h post-consumption. They were the first to show that the observed effects of anthocyanins in humans may not only be accomplished by anthocyanins themselves, but also by their metabolites [25][26].
Ackermann (2010) studied the effects of several body fluid models on anthocyanins [27]. He found no influence of salivary juice on anthocyanin composition as well as no influence of oral enzymes or bacteria even at longer incubation times. However, he annotates that oral pH is difficult to simulate since it is dependent on food uptake. In a gastric juice model (pH 1.81), containing pepsin, he also found no metabolization over an incubation time of 4 h. This has also been found by others [28][29][30]. However, more recent studies suggested that there might be changes in anthocyanin composition and content in the stomach depending on the type of anthocyanin (i.e., cyanidin or delphinidin) [31].
As anthocyanins can be detected in blood serum rapidly after ingestion, it was found that they are absorbed from the stomach without prior metabolization [32][33][34]. Passamonti et al. [32] suggested the bilitranslocase to be involved in this transport. In a human gastric epithelial cell model (NCI-N87), used for studying drug metabolism [35], a non-linear transport of anthocyanins had been found, suggesting an active transport [36]. Similarly, Oliveira et al. found a trans-epithelial transport in a different gastric model (MNK-28). In a computational model, they found anthocyanins to show affinity for the human glucose transporter 1 (GLUT1) [37]. In a further study, silencing of GLUT1 and GLUT3 mRNA resulted in a transport reduction of Malvidin-3-glucoside and other anthocyanins from a purple sweet potato peel extract, suggesting these two transporters to play an important role in anthocyanin transport in the stomach. However, the transporters seem to have different affinities to anthocyanins depending on the glycosylation level [38].
In artificial duodenal juice (pH 7.2), containing pankreatin, a commercial mixture of amylase, lipase, and protease, Ackermann (2010) found a decrease of 8 out of 12 anthocyanins 30 min after incubation [27]. Only the concentration of the Petunidin glycosides and Cyanidin-arabinoside did not decrease. After 10 h of incubation, all anthocyanin concentrations were 12% of base level or below. After 24 h, no traces of anthocyanins could be found. In control solutions, containing no enzymes, he found a similar result, suggesting only an influence of pH rather than enzymes. In ex vivo studies of the small intestine, he found a half-life period of 1.9–4.6 h with delphinidin-glycosides being much more unstable than malvidin- or petunidin-glycosides. In a large intestine model, 1 h incubation resulted in an anthocyanin decrease of up to 90%. It should be noted that the model was composed of porcine caecum instead of human. These results, namely the absorption in the small and large intestine, were also confirmed by others [39][40]. However, the small intestine seems to be the main absorption site together with the stomach (see also [23]).
Additional to these findings, the influence of the gut microflora was also examined. The general influence of small and large intestine microflora on anthocyanin metabolization was discovered early [41][42]. The metabolization products also seem to depend on anthocyanin structure and glycosylation [40][43].
Cassidy and Minihane (2016) reviewed several studies concerning metabolization of flavonoids. In the small intestine, the lactase phlorizin hydrolase (LPH) is considered to hydrolyze glycosides into their aglycones, which then can enter the cells via passive diffusion. However, anthocyanins are an exception to this since they are mainly present as glycosides. Glycosides can enter epithelial cells via transporters like the sodium-dependent glucose transporter 1 (SGLT1) and be hydrolyzed in the cells [38][44]. After absorption, they undergo phase I metabolism in the liver by P450 monooxygenases and phase II metabolism by enzymes like urine-5′-diphosphate glucuronosyltransferases (UGT) or catechol-O-methyltransferases (COMT) [45]. In addition, enterohepatic recycling has been found to account, to a degree, for the persistence of anthocyanin conjugates and complexity of metabolites produced from a dose of anthocyanins, thus demonstrating the complexities involved in understanding the bioavailability of anthocyanins [46].
Overall, anthocyanins seem to have a higher bioavailability than initially thought. They seem to be not influenced by gastric acid but are converted into a variety of metabolites, mainly in the small intestine by enzymes and gut microflora. An overview of the ADME is shown in Figure 2.

More
© Text is available under the terms and conditions of the Creative Commons Attribution (CC BY) license (http://creativecommons.org/licenses/by/4.0/)
Upload a video for this entry
Information
Subjects: Nutrition & Dietetics
Contributor MDPI registered users' name will be linked to their SciProfiles pages. To register with us, please refer to https://encyclopedia.pub/register :
Philipp Ockermann
View Times: 114
Revision: 1 times (View History)
Update Time: 14 Sep 2021
Table of Contents
1000/1000
Hot Most Recent