Submitted Successfully!
Thank you for your contribution! You can also upload a video entry related to this topic through the link below:
https://encyclopedia.pub/user/video_add?id=14140
Check Note
2000/2000
Tumor-Derived Galectins
Edit
Upload a video
This entry is adapted from 10.3390/cancers13184529

In humans, the immune system is constituted by approximately 1013 T lymphocytes at a given time [1]. However, lymphoid homeostasis is highly dynamic, depending on the continuous production of naïve cells in central hematopoietic organs, their activation, survival, and generation of immune memory in peripheral organs. Each of these processes depends on continuous biological signals that lymphocytes receive from their microenvironment [2]. At a molecular level, multiple signaling pathways are involved in lymphocyte regulation. Although we only have a partial understanding of this subject, an extensive compendium of the literature supports galectins as being prominent actors in the regulation of immune homeostasis in both central and peripheral organs (as discussed below).
Currently, 12 human galectin members have been described and found in GenBank (https://www.ncbi.nlm.nih.gov/genbank/; accessed on 15 July 2021). Galectins are involved in the regulation of different cellular processes, among which we can mention cell differentiation, cell adhesion and migration; gene transcription and RNA splicing; and cell cycle and apoptosis [3,4]. Such biological functions depend on their lectinic properties (recognition of N-acetyllactosamine sequences displayed on the cell surface, in the extracellular matrix, or intracellular glycoconjugates) (Table 1). Besides, and studied to a lesser extent, they also depend on non-lectinic properties mediated by interactions of galectins with nucleic acids, proteins, lipids, and complex biomolecules (reviewed in [4], Table 1).
Table 1. The galectins’ interactors and their impact on cancer immune escape.
Interestingly, the expression profile of galectins is altered during several pathological conditions (expert opinions for each disease have been reviewed in [5,6,7,8,9,10,11,12,13,14]). In particular, the production of galectins-1, -3, -7, -8, and -9 is deregulated during tumorigenesis [15,16,17]. These galectins are detected in transformed cells and their associated stroma in various types of cancers [18,19]. In the latter case, it is not clear whether stromal cells produce galectins by themselves or take them up from neighboring transformed cells [20,21,22]. However, galectins play essential roles in controlling the tumor microenvironment properties independently of their cellular origin [18,19]. Notably, tumor-associated hypoxia and inflammation contribute to the deregulation of galectins expression [23,24,25,26]. As a consequence, increased levels of these galectins are detected in the sera of cancer patients. Until mid-2021, more than 55 independent studies have been recorded in this field (here, and due to space limitations, we only cite some examples on each galectin member [27,28,29,30,31,32,33,34,35,36,37,38]).
Increased galectins production in cancers has been proposed as a prognostic factor since they can easily be detected in the biological fluids and their expression in the tumor microenvironment generally predicts a poor clinical outcome for patients [15,19,39,40,41]. Besides being used as interesting biomarkers, these tumor-derived galectins display active roles in defining tumor progression. Despite the multiple influences these proteins have on the behavior of tumor cells (e.g., tumorigenesis, metastasis, and angiogenesis) [16], it is clear that they constitute an important strategy applied by tumors to evade an immune attack [42]. This review aims to deepen our knowledge on how galectins, abundantly produced by tumors, can impact the production, activation, and effector function of anti-tumor T lymphocytes; some of these processes occur at anatomic sites distant from the tumor (Figure 1). 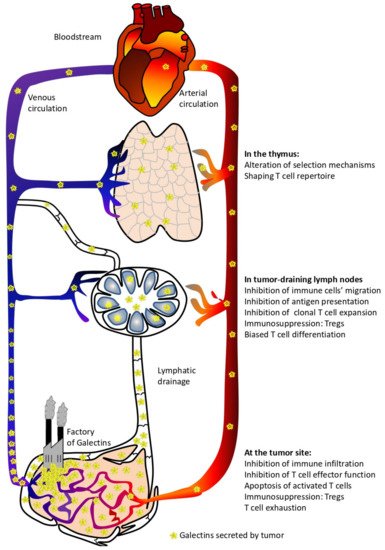 1.1. Do Circulating Tumor-Derived Galectins Have Any Impact on Naïve T Cell Production?

1.2. T Lymphocyte Regulation by Galectins at the Periphery

In humans, the peripheral T cell pool is constituted by approximately 4 × 1011 naïve T lymphocytes [123]. In general, analysis of the murine peripheral T cell repertoire has demonstrated that each naïve clonotype is made up of few cells [162]. Similar low frequencies for each T clonotype have been found in humans [163]. More stringent restrictions apply to the anti-tumor-specific T cell repertoire since potent central selection processes only allow the exit of low avidity clonotypes against self-epitopes [164]. On the other hand, the frequency of anti-tumor T cells is increased through the clonotypes reactive against the neoepitopes, which arise as a consequence of tumor genetic instability; these clonotypes are not eliminated by central tolerance [165,166]. In general, basic studies have reported variable, low frequencies of pre-existing anti-tumor T lymphocytes in healthy individuals [167,168,169]. These low numbers of cells constitute the available army to recognize and eliminate transformed cells. In cancer patients, the said T cells expand and gain cytotoxic function in a tumor-dependent manner since each of these cancers differs in their mutational ratio, in their immunogenicity [170], and use of evasion pathways. Despite these considerations, the low number of specific anti-tumor T cells represents a real challenge for immuno-oncology. This fact implies that the expansion and gain of function of the few tumor-specific T cells must be as efficient as possible, at the risk of losing these effector cells. Hence, understanding the tumoral strategies leading to lymphocyte de-functionalization is essential to counteract them during cancer immunotherapies.
To assess the role of tumor-derived galectins on the function of immune cells in the periphery, we will focus on two anatomical locations where tumors have a direct and significant influence: the draining lymph nodes and the tumor itself. It does not imply that circulating galectins (produced by tumors) can influence cellular functions in other anatomical locations; these are beyond the scope of this review.