Submitted Successfully!
Thank you for your contribution! You can also upload a video entry related to this topic through the link below:
https://encyclopedia.pub/user/video_add?id=14122
Check Note
2000/2000
Multi-Organ Histopathological Changes
Edit
Upload a video
This entry is adapted from 10.3390/v13091703

Infection with SARS-CoV-2, the virus responsible for the global COVID-19 pandemic, causes a respiratory illness that can severely impact other organ systems and is possibly precipitated by cytokine storm, septic shock, thrombosis, and oxidative stress. SARS-CoV-2 infected individuals may be asymptomatic or may experience mild, moderate, or severe symptoms with or without pneumonia.

Infection with SARS-CoV-2, the virus responsible for the global COVID-19 pandemic, primarily causes a respiratory illness. Approximately 193 million cases have been reported worldwide, resulting in more than 4 million deaths to date. COVID-19 is likely precipitated by cytokine storm, septic shock, thrombosis, and oxidative stress [1]. Infected individuals develop a wide range of symptoms ranging from mild to severe illness. Symptoms can appear 2–14 days after exposure to the virus. These include, fever, chills, loss of taste or smell, sore throat and cough, shortness of breath or difficulty in breathing, congestion and runny nose, fatigue, muscle and body aches, severe headache, nausea or vomiting, and diarrhea [2][3].
Most individuals (81%) develop mild to moderate symptoms of COVID-19, which can extend to pneumonia [4][5][6][7][8][9][10][11]. However, 14% of patients develop severe symptoms that include dyspnea and hypoxia, with more than 50% showing lung involvement [12][13]. Additionally, 5% of patients suffer critical symptoms such as respiratory failure and shock. At least one third of individuals infected with SARS-CoV-2 virus do not develop noticeable symptoms at any point in time [14]. Asymptomatic carriers tend to not get tested, thus spreading the virus to others and leading to an increase in infections. Individuals may develop symptoms later (pre-symptomatic) or have very mild symptoms [14]. Recently, multiple SARS-CoV-2 variants were reported to be circulating globally. These include a UK variant (B.1.1.7, also known as VOC-202012/01), South African variants (B.1.351, 501Y.V2), and Brazilian variants of SARS-CoV-2 (P.1, B.1.1.28.1, and B.1.617.2). These variants have been classified by the CDC as variants of concern [15] due to their high rate of transmissibility, although their epidemiology and impact on humans are unclear. More recently, the additional SARS-CoV-2 variants B.1.427, B.1.429, B.1.525, P.3, B.1.617.1, B.1.620, B.1.621, and C.37 (variants of interest), as well as B.1.617.3, B.1.214.2, A.23.1+E484K, A.27, A.28, C.16, B.1.351 + P384L, B.1.351 + E516Q, B.1.1.7 + L452R, B.1.1.7 + S494P, C.36 + L452R, AT.1, B.1.526, B.1.526.1, B.1.526.2, B.1.1.318, P.2, B.1.1.519, AV.1, P.1 + P681H, B.1.671.2 + K417N (variants under monitoring), and B.1.427/B.1.429 and B.1.616 (de-escalated variants) have been reported.
Over the past 1000 years, coronaviruses have continually evolved [16]. The earliest identification of coronaviruses was in animals. It first isolated as an infectious bronchitis virus (IBV) in chickens in 1947 [17], followed by the isolation of mouse hepatitis virus (MHV) in mice in 1949 [18]. In 1946, pigs in the United States were identified as carriers of a transmissible gastroenteritis virus (TGEV) [18]. In the 1960s, human coronaviruses were isolated from respiratory tract infections [19]. B814 and 229E were the first two viruses isolated in humans [20][21]. Subsequently, tissue cultures were used to isolate additional coronavirus strains (OC16 and OC43) from humans [22][23]. To date, coronaviruses have been identified in numerous other species, including calves, dogs, cats, bats, sparrows, rabbits, and turkeys [24]. Early phylogenetic studies on SARS-CoV-2 genomic sequences showed that it clustered closely with sequences originating from SARS-like viruses from bats within lineage B of the betacoronavirus genus. Lineage A groups are prototypical coronaviruses such as MHV and the human coronaviruses HCoV-HKU1 and HCoV-OC43 (Figure 1A,B) ([25][26][27][28][29][30][31][32][33][34][35][36][37][38][39][40] tree.bio.ed.ac.uk/software/figtree/ accessed on 7 July 2021) (Software (ed.ac.uk accessed on 7 July 2021)), while the other highly pathogenic coronavirus, MERS-CoV, is found within lineage C, along with the related camel-derived MERS-CoV ([41][42] and references therein). The S protein amino acid sequences from four representative beta coronaviruses (HCoV-HKU1, MHV, SARS-CoV, and MERS-CoV) were aligned and the solved S protein structures were compared to determine their amino acid identity and the overall structural organization similarities among these proteins. The findings showed an average of approximately 30% identity among the four viral S proteins at the amino acid level, with the exception of HCoV-HKU1 and MHV, which share an amino acid identity of 59% at the S protein ([41][42] and references therein). While there are dissimilarities between the amino acid sequences, the structure of the four betacoronavirus S proteins were found to have similar folding patterns. 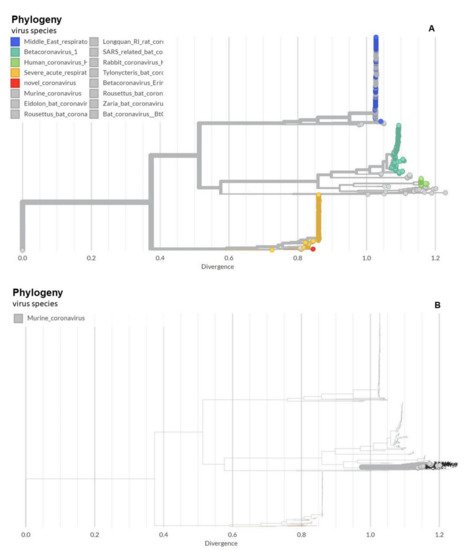 Figure 1. Phylogeny of coronaviruses including the novel coronavirus SARS-CoV-2. (A) Phylogeny of coronaviruses including the novel coronavirus SARS-CoV-2.; (B) Phylogeny of murine coronaviruses including the murine hepatitis virus.
MHV-1 infection of A/J mice produces clinical SARS-like disease with high mortality [43][44][45]. These mice develop severe pulmonary disease at day 6 post-MHV-1 infection and 60% mortality from 7 to 12 days post-infection. On day 2, patchy interstitial alveolar thickening and fluid accumulation in alveolar spaces (pulmonary edema) are prominent. At death, the lungs show severe interstitial pneumonitis with large areas of complete consolidation. The interstitial inflammatory reaction includes the presence of hyaline membranes, fibrin deposition, and significant lymphocyte and macrophage infiltrates. Infiltrating cells in MHV-1-infected lung tissue from A/J mice are predominantly macrophages and neutrophils on days 2–6 post-MHV-1 infection. T cells (CD3 positive) also increase in the infiltrates, especially by day 6 post-infection. Examinations of the livers of MHV-1-infected A/J mice show normal histology at day 6, but on days 7 or 8 just prior to death, evidence of severe hepatic congestion has been observed, as in humans [46]. Thus, A/J mice are highly susceptible to MHV-1-induced pulmonary disease when the virus is delivered intranasally.

MHV-1 inoculated female mice displayed signs of sickness (drowsiness and lack of movement) at 2 days post-exposure. About 43.75% of mice (7/16) showed signs of illness on day 2 post-MHV-1 inoculation, and the number of mice exhibiting clinical signs increased gradually (56.25%, 62.5%, and 75.0% on days 3, 4, and 5, respectively) (Figure 2A). Of note, the remaining 25% of mice did not show any clinical signs (observed for up to 91 days). Further, exposure of mice to DMEM alone had no effect on animal survival.

Figure 2. MHV-1 inoculated mice displayed signs of sickness. (A) About 40% of mice showed signs of sickness on day 2 post-MHV-1 inoculation, and the number of mice exhibiting clinical signs increased gradually (up to 75%). The remaining 25% of mice did not show any clinical signs (observed for up to 91 days). (B) MHV-1 inoculated mice showed clinical signs (from stages I to VI) from days 2 to 12 and beyond. Mild to moderate clinical signs (stages I–III) were observed from days 2 to 4. The MHV-1 infected mice showed severe sickness (stages IV–VI) from day 6 onward. Further, 60% of animals died from days 7 to 12 (n = 16).
Stage I symptoms (drowsy and lack of movement) on day 2 and stage II symptoms (slightly ruffled fur and altered hind limb posture) on day 3 were observed post-MHV-1 inoculation. Stage III symptoms (ruffled fur and mildly labored breathing) were detected on days 4 and 5. Stage IV (ruffled fur, inactivity, moderately labored breathing, and tremor) was observed on day 6, and stages V and VI (ruffled fur, obvious labored breathing and lethargy, as well as a moribund state and death) were noted from days 7 to 12 (Figure 2B). Figure 2A,B involves the same animals. For example, in Figure 2A, approximately 40% of animals showed clinical signs of infection and all of them were in stage I. On day 3, about 55–60% animals showed clinical signs of infection that were of stage II. The additional mice (10–20%) that exhibited clinical signs of infection at later stages showed a severity similar to that of mice that exhibited clinical signs of infection at early stages. Of note, we observed mild diarrhea (several loose stools in one day) in the early stages of illness (from 2 to 4 days). However, the diarrhea ended from days 5 to 12 and occurred only in a few animals (5/16 mice), as observed in humans in association with COVID-19 [47][48]. Further, MHV-1 inoculated mice displayed severe venous thrombosis (4/16 mice at days 5–7), a characteristic feature of COVID-19 (Figure 3) [38][39][40][41][42][49][50][51][52][53]. Milder forms of thrombosis were also observed in MHV-1 inoculated mice at days 5–7 (7/16). The natural history of the disease was observed in mice that survived after day 12 for up to 91 days.

MHV-1 inoculated mice were monitored for weight loss from day 2 onwards. MHV-1 administered mice showed approximately 20% weight loss on day 3, around 25–30% weight loss on day 4 and 5, and 35–40% weight loss from days 7 to 12 (Figure 4). Of note, the weight loss occurred rapidly on days 6–7 in animals that showed severe clinical signs (from about 25% to 40%). We were unable to control this since it was not obvious whether any particular animal would lose that much weight in a short period of time, and as such we could not provide glucose/KCl (i.e., fluid support). The reason for such rapid weight loss is unknown. It is possible that rapid body fluid loss or a lack of fluid intake and loss of muscle mass and fat during the end stages may have occurred, as has frequently been observed in humans in association with SARS-CoV-2 infection. While our elaborated survival/characterization study shows the exact nature of the viral infection, and our initial characterization study will assist researchers in better understanding the severity of disease progression and in designing mechanistic studies, we will include the humane endpoint criteria in future investigations based on our current observations. 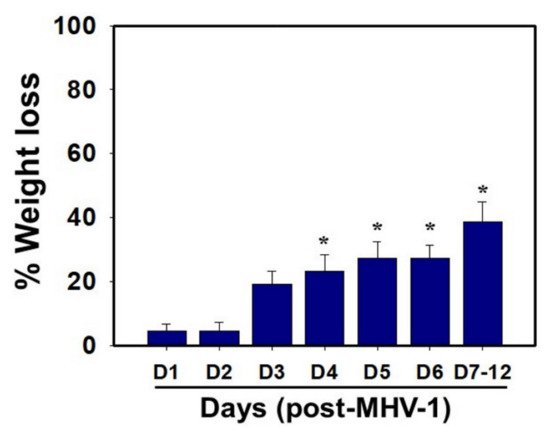 Lung: MHV-1-infected mice at day 7 showed inflammation (i.e., granular degeneration of cells, and migration of leukocytes into the lungs), along with proteinaceous debris filling of the alveolar spaces with fibrillar to granular eosinophilic protein strands caused by the progressive breakdown of the capillary wall and epithelial integrity, permitting leakage of protein rich edematous fluid into the alveoli, and the presence of hemosiderin-laden macrophages (indicating pulmonary congestion with dilated capillaries and leakage of blood into alveolar spaces). Furthermore, peribronchiolar interstitial infiltration, bronchiole epithelial cell necrosis, necrotic cell debris within alveolar lumens, alveolar exudation, hyaline membrane formation, alveolar hemorrhage with red blood cells within the alveolar space, and interstitial edema are all characteristic features of infected lungs in humans with SARS-CoV-2 infection [59] (Figure 5). 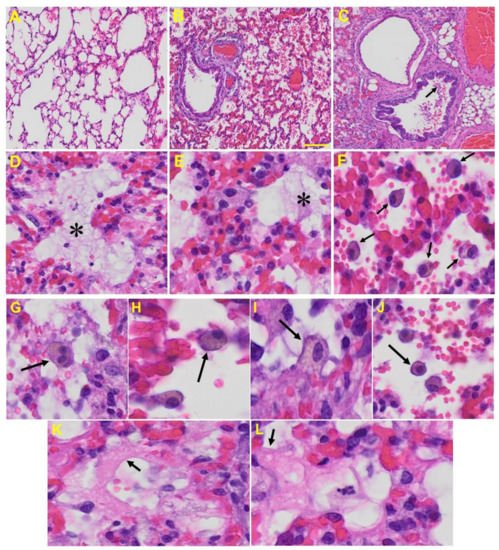 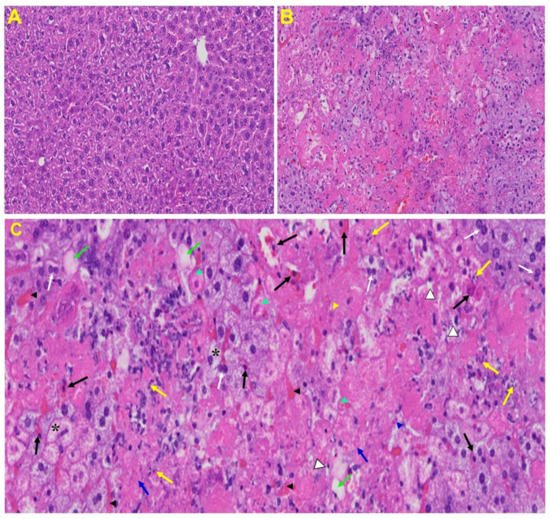 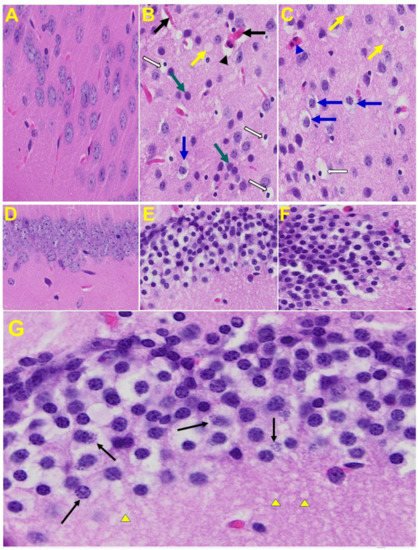 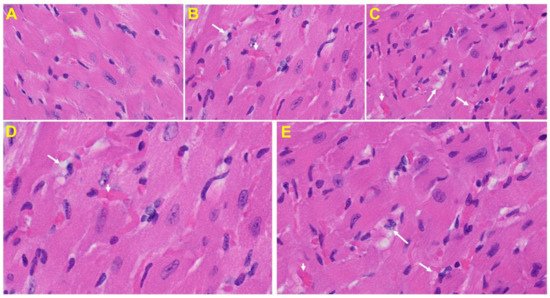 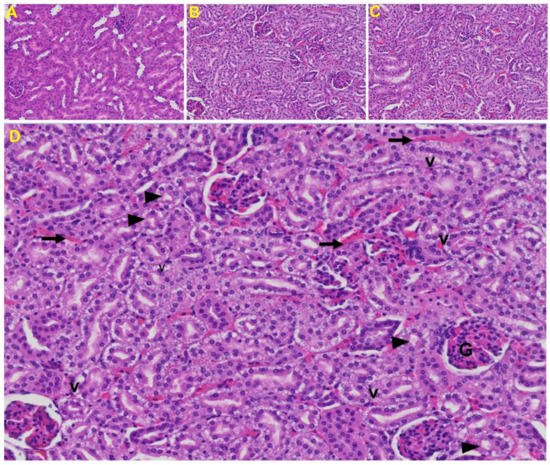