Submitted Successfully!
Thank you for your contribution! You can also upload a video entry related to this topic through the link below:
https://encyclopedia.pub/user/video_add?id=14041
Check Note
2000/2000
Pharmaceuticals Removal from Water
Edit
Upload a video
This entry is adapted from 10.3390/environments8080085

In recent decades, the intense environmental contamination was mostly attributed to the rapid industrialization of the modern societies dictated by the increased human needs, raising serious concerns in the international scientific community [1][2]. Among the various wastes present in water bodies, pharmaceuticals (PhCs) hold a special place since their presence even at low concentrations can cause irreversible damage to the ecosystem and human health [3]. PhCs can be divided into various categories concerning their characteristics such as anti-inflammatory (e.g., diclofenac), antiepileptic (e.g., carbamazepine), stimulant (e.g., caffeine), β-blockers (e.g., propranolol), antibiotics (sulfamethoxazole), psychiatric (e.g., venlafaxine), antimicrobials (e.g., triclosan), etc. [1].
Since pharmaceutical wastewater includes compounds of high complexity, the processes related to their degradation are quite demanding [2]. Various methods were applied to remove PhCs from water and wastewater, such as coagulation or biological treatment [4][5][6][7]. However, the complete removal and mineralization of PhCs cannot be achieved with these conventional methods [8], and the demand for more advanced methods for wastewater treatment resulted in the development of advanced oxidation processes (AOPs) during the 1980s [2]. Based on the in situ generation of oxygen species of high reactivity (ROS), such as hydroxyl (•OH) or superoxide radicals (O2−), the most significant advantage of AOPs is that they can completely mineralize even non-biodegradable pharmaceutical wastewater employing specific conditions under an environmentally friendly manner [9]. Various AOPs are applied to degrade organic compounds divided into different categories concerning the employed methodology for the generation of reactive oxygen species (photochemical or non-photochemical) or the use or not of catalytic materials during the process (homogeneous or heterogeneous). Some of the most common AOPs are ozonation, UV/hydrogen peroxide, and photocatalysis [10].
Among the applied AOPs, the electrochemical oxidation processes (EOPs) are highly efficient technologies with a facile operation. They are easily combined with other AOPs and biological treatment [8]. The electrochemical oxidation of PhCs can be performed on the surface of the anodic electrode of the electrochemical cell (direct) or via the ROS produced from the water oxidation performed on the anode surface (indirect) [8][11][12], as depicted in Figure 1. In addition, some ROS produced during electrolysis can diffuse to the bulk solution, thus enhancing the efficiency and partially bypassing mass transfer limitations. Moreover, the coupling of the EOPs with other physicochemical technologies is considered a highly efficient combination, with a typical example of this technology being the reactive electrochemical membrane [13]. 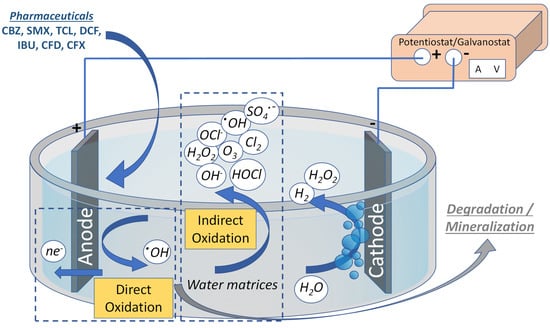 Figure 1. Direct and indirect electrochemical oxidation process for the mineralization of PhCs.
Recently, Dao et al. [12] and Zhang et al. [8] published two exceptional works relevant to the recent progress concerning the electrochemical oxidation processes for PhCs degradation. Dao et al. [12] studied the recent advances in removing various PhCs from aqueous solutions applying EOPs. They focused their research efforts on the various parameters affecting the efficient PhCs degradation using EOPs such as the reactor design, the electrode materials (BDD, lead, etc.) or the operational parameters (current density, pH, etc.). Zhang et al. [8] studied the recent advances in electrochemical anodic oxidation processes focusing mainly on the parameters affecting the efficiency of the process. Most of the examined parameters that the aforementioned research groups have found to affect the EOPs for PhCs removal are practically the same such as the design of the electrochemical reactor, the electrode material, the applied current density, the electrolyte concentration, the initial PhCs concentration or the pH of the solution.

2. Contamination of Aquatic Environment by PhCs

The contamination of the water bodies by the PhCs is attributed to hospital or pharmaceutical industry waste, personal hygiene products or therapeutic drugs [14]. The most frequently detected PhCs in water bodies are antibiotics, antiepileptics, antidepressants, anti-inflammatories, antihistamines, and β-blockers [15]. The unknown negative long-term effect that PhCs may have on human health through drinking water as well as the problems that the presence of these organic compounds may cause to the ecosystem, resulted in the development of a research field relevant to this issue. The special features of the structure of most PhCs distinguish them from other industrial wastes and make their degradation quite demanding. Typically, large polar molecules of high complexity with various structures and weights are combined to form PhCs. The composition of these molecules is characterized by the presence of various ionizable compounds, whereas their ionization degree strongly depends on the pH of the solution. Common PhCs such as SMX may remain in the environment for ca. a year or even more, as in the case of clofibric acid [16]. The persistency of these PhCs may result in their accumulation, which is possible to increase their biological activity [14].
The consumption of PhCs may follow two possible pathways, either being excreted without being chemically converted or undergoing biochemical reactions during the metabolization process. These biochemical reactions include the redox reactions, hydrolysis and alkylation reactions, and the formation and subsequent extraction of glucuronide and sulfates as metabolites [17][18]. PhCs are introduced into the environment either by their disposal in rubbish that could be prevented or via biological wastewater produced by humans or animals, which is difficult to prevent [14].