Submitted Successfully!
Thank you for your contribution! You can also upload a video entry related to this topic through the link below:
https://encyclopedia.pub/user/video_add?id=13936
Check Note
2000/2000
Interaction between Emotion and Pseudoneglect
Edit
This entry is adapted from 10.3390/sym13081531

“Pseudoneglect” refers to a spatial processing asymmetry consisting of a slight but systematic bias toward the left shown by healthy participants across tasks. It has been attributed to spatial information being processed more accurately in the left than in the right visual field. Importantly, evidence indicates that this basic spatial phenomenon is modulated by emotional processing, although the presence and direction of the effect are unclear.

Over the last two decades, much research has focused on the influence of emotion on spatial biases in both patients and neurologically intact individuals, based on the strong influence that emotion has on attention in everyday life, on the tight interconnection between the neural mechanisms that mediate these two phenomena, and on the brain lateralization of emotion processing. In this context, spatial attention tasks such as the line bisection have been used in an attempt to disentangle the issue of emotion and attention lateralization. The rationale is that if attention is right-lateralized and emotion is also right-lateralized (i.e., “right-hemisphere hypothesis” [1]), then both functions concur in shifting the activation balance in favor of the right hemisphere, enhancing the pseudoneglect in the left hemifield. An alternative account sees positive emotion lateralized to the left and negative emotion to the right (i.e., the “valence-specific hypothesis” [2]) predicts that negative emotion should increase the relative activation of the right hemisphere and enhance pseudoneglect. In contrast, positive emotion should increase the relative activation of the left hemisphere and attenuate pseudoneglect.

The association between emotion and the right hemisphere goes back to the very early neurology literature when Mills [3] observed that patients with a lesion in the right side of the brain had an impairment in emotional expression. For the right-hemisphere hypothesis, the perception of emotional stimuli is related to the activity of the right hemisphere, regardless of affective valence [4]. Conversely, the valence-specific hypothesis is based on evidence that lesions in the left frontal lobe were related to negative emotional states while lesions in the right hemisphere were more associated with positive or maniac emotional states [5]. For the valence-specific hypothesis, the left hemisphere processes positive emotions, whereas the right hemisphere processes negative emotions [6]. An alternative, the “approach–withdrawal” hypothesis, proposes that brain asymmetries observed for positive and negative emotions are related to the underlying motivational system linked to positive and negative emotions [7]. Accordingly, the left prefrontal cortex is involved in processing approach-related emotions, such as happiness and anger, whereas the right prefrontal cortex processes withdrawal-related emotions, such as sadness and fear. Despite a large body of research, evidence on the interaction between emotion and spatial attention is still not well understood. A systematic review on the relation between pseudoneglect and emotion conducted according to the PRISMA guidelines (see Figure 1), [8] yielded 15 studies published by February 2021 that measured the relationship between emotional processing and spatial attention pseudoneglect. 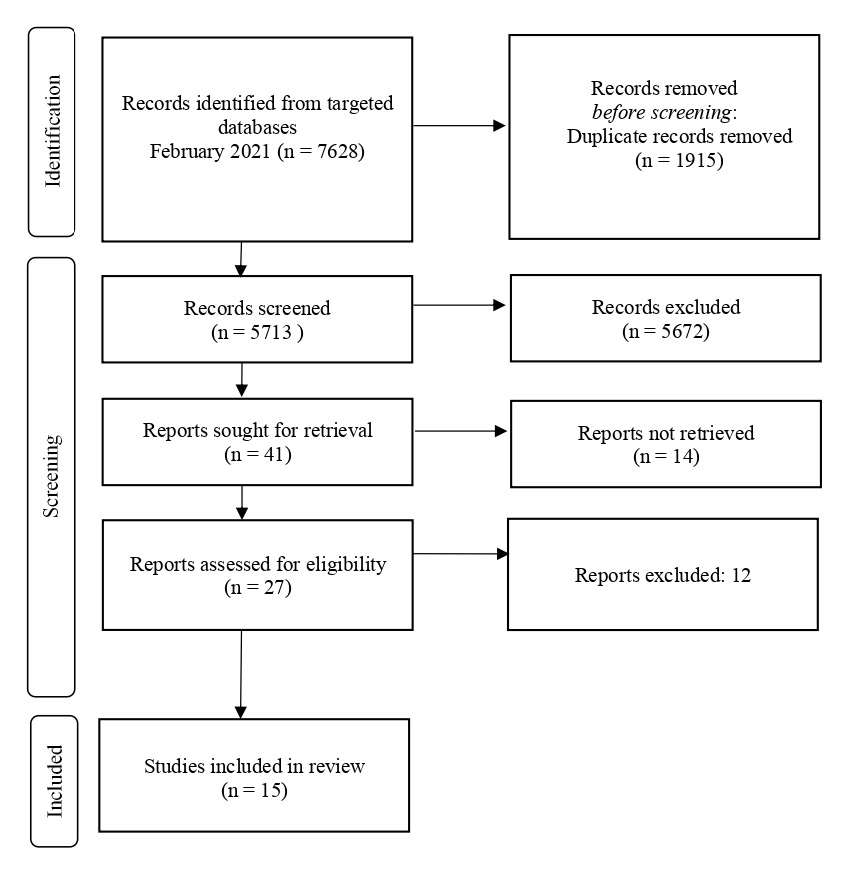 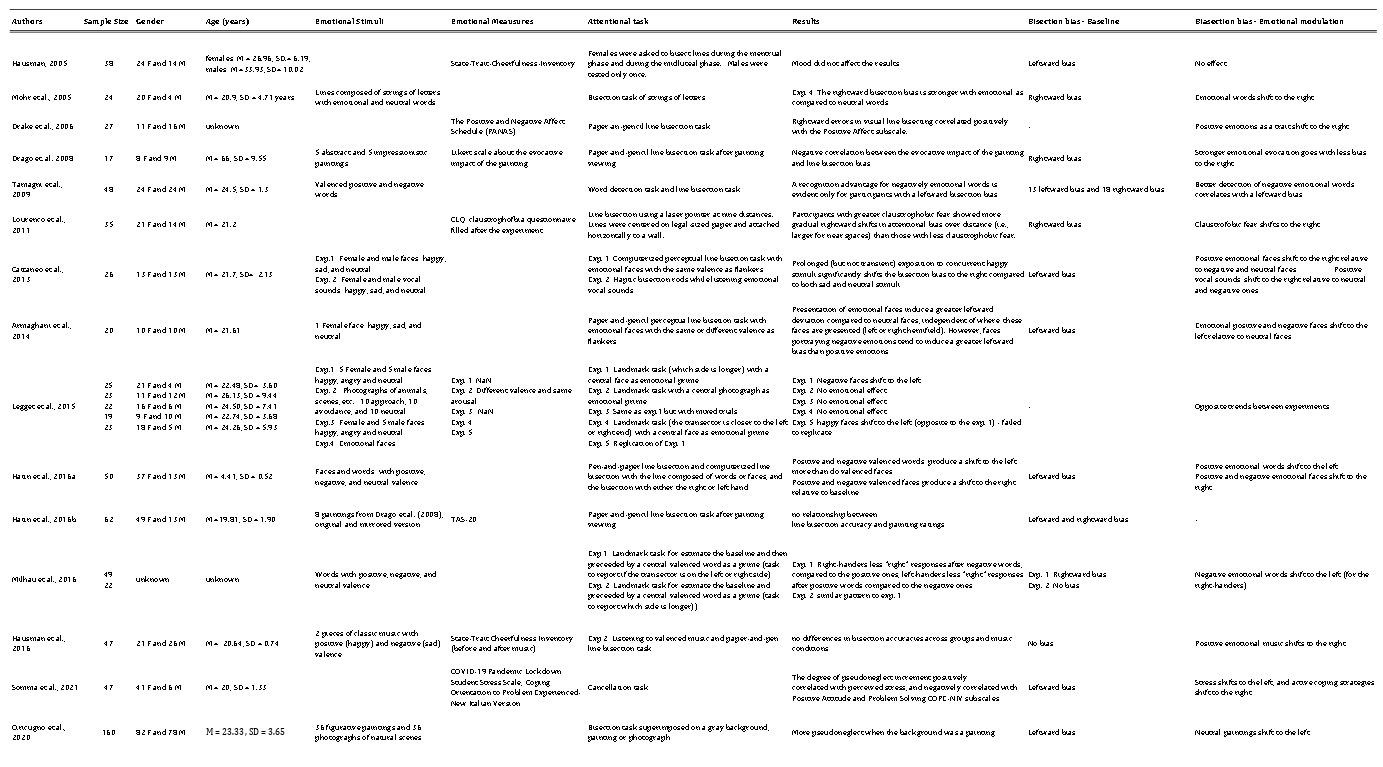 Of the 15 studies meeting the inclusion criteria, 11 studies used visual stimuli, such as faces, words, and pictures with emotional connotations. The main finding is that the majority of the studies found that pseudoneglect was modulated by emotional stimuli or by participants’ self-reported emotional state or trait. However, the direction of these effects is less clear-cut. Of the studies with emotional faces or words, three reported that emotion induces a rightward bias (or attenuates the leftward bias): one study used emotional words [9], one used angry and happy faces [10], and one used happy and sad faces [11]. Four studies reported that emotion induces a leftward bias (or attenuates the rightward bias): one study used happy and sad faces [11] and three studies used negative words [9][12][13][14]. One study with faces and words reported mixed results [15]. The two studies using auditory stimuli [11][16] report a rightward bias when listening to sad and happy music. Moreover, studies on the effects of self-reported affect and traits on pseudoneglect show that positive affect [17] and positive attitude [18] are correlated with a rightward bias. Finally, greater self-reported claustrophobic fear is related to a rightward bias when the line bisection is performed at a short distance [19].

The entry conclude that there are substantial methodological differences across studies that could account for the heterogeneity in the observed findings. Firstly, the time between presenting the emotional stimuli and spatial attention tasks varies, with some employing simultaneous and others sequential presentation. This difference does not rule out low-level variables (such as surround suppression) due to simultaneous versus sequential stimulus presentation that might contribute to the attention bias [20]. Secondly, some studies present the line flanked by two emotional stimuli and some others flanked by just one stimulus on the left or right side of the line. However, contextual stimuli may influence the localization of the subjective midpoint, biasing the bisection away from the location of the flanker [21]. Indeed, using one flanker seems to increase the attentional load for extracting the segment from the background and reduce the salience of the flanked-line segment [22]. Thirdly, there are individual differences in the attention bias at baseline and this variability does not seem to predict the direction of changes driven by the emotional modulation of the bisection bias. Finally, an additional neural factor may contribute to the complex picture that emerges from the literature. This is related to which hemisphere is preferentially involved in processing the specific category (e.g., faces, words, sounds, etc.) of the stimuli used and their relative position in the visual field (i.e., central vs. peripheral presentation). For instance, visual stimuli such as faces and words likely activate networks of non-parietal visual category-selective regions that include the right fusiform face area [23] and the left visual word form area [24].

Future studies should consider comparing brain activation asymmetries during the baseline and during the task while taking into account the brain hemisphere that is preferentially involved in processing the category of stimuli used.