Submitted Successfully!
Thank you for your contribution! You can also upload a video entry related to this topic through the link below:
https://encyclopedia.pub/user/video_add?id=13873
Check Note
2000/2000
Sympathetic–Vascular Interactions
Edit
Upload a video
This entry is adapted from 10.3390/biomedicines9081007

Sympathetic–vascular interactions means that the sympathetic nervous system plays a pivotal role in the short- and long-term regulation of different cardiovascular functions. In recent decades, increasing evidence has demonstrated that sympathetic neural influences are involved not only in the vasomotor modulation of small resistance arteries but also in the control of large arteries. Sympathetic activity and vascular function, which are key factors in the pathophysiology and prognosis of cardiovascular disease, are linked by a close relationship. Evidence from experimental studies indicates that the sympathetic nervous system is critically influenced, at the central and also at the peripheral level, by the most relevant factors regulating vascular function, namely nitric oxide, reactive oxygen species and endothelin. Additionally, there is evidence of a reciprocal influence between endothelial function and sympathetic mechanisms.

Basic and clinical studies carried out during recent decades have allowed to substantially improve the available information on the role of the sympathetic nervous system in the regulation of cardiovascular function in physiological conditions and in pathologic states directly or indirectly affecting the heart and systemic circulation [1]. Evidence has been provided that sympathetic neural influences, in conjunction with other circulating humoral factors, exert a fundamental role in the homeostatic control of the cardiovascular system [1]. Such interactions represent the key pathophysiological steps in the development and progression of several cardiovascular diseases, becoming important triggers of complications, markers of prognosis and targets of treatment.

An increase in sympathetic activity may reduce arterial distensibility via at least two non-mutually exclusive mechanisms. First, distensibility may be reduced because the resulting increase in vessel diameter stretches the less distensible component of the vessel wall (e.g., collagen), making the relationship an inverse one [2][3][4]. Second, distensibility can be reduced because of a sympathetic-dependent increase in heart rate, given that this increase is associated with a stiffening of medium-sized and large elastic arteries in both animals and humans [5][6]. An additional mechanism may consist in contraction of the vascular smooth muscle because the elastic modulus of contracted muscle tissue is greater than that of the relaxed one [7].

The vast majority of clinical conditions known to be characterized by an adrenergic overdrive, including essential hypertension, congestive heart failure, chronic kidney disease, obesity and metabolic syndrome, share endothelial dysfunction as a common hallmark [7]. It should be emphasized that in some of the above conditions, sympathetic overdrive and, concomitantly, endothelial dysfunction have a clear-cut clinical relevance because both have been shown to represent independent markers of the disease prognosis [8][9][10][11][12].

The increased sympathetic activity reported in clinical conditions characterized by high blood pressure appears to be a peculiarity of the essential hypertensive state, being undetectable in the secondary forms of the disease [13]. Furthermore, various studies have convincingly shown that the magnitude of the adrenergic overdrive parallels the severity of the hypertensive state, becoming more and more elevated as the clinic or ambulatory blood pressure values progressively increase [13]. Although several studies support the “central neurogenic “ nature of the hypertension-related sympathetic overdrive, evidence has been provided showing that a decrease in nitric oxide levels can “per se” at least in part be responsible for the augmented sympathetic neural drive [14][15]. Similarly, in patients with chronic kidney disease, also characterized by a marked sympathetic activation [9], circulating plasma levels of asymmetric dimethylarginine, an inhibitor of nitric oxide, are elevated [16].

The situation appears to be more complex in congestive heart failure, which is characterized by functional and structural cardiovascular alterations which involve the cardiac pump and the peripheral circulation as well. The latter include, among others, a reduction in arterial distensibility and, thus, an increase in arterial stiffness, which may favor the progression of the heart failure state by determining changes in central hemodynamics [17]. A number of factors, alone or in combination, participate in the development and progression of the arterial stiffness alterations, including sympathetic activation [18]. It is worth mentioning that, firstly, a significant relationship exists between the reduction in arterial distensibility (and thus the increase in arterial stiffness) and the magnitude of the adrenergic overdrive, and secondly, cardiac sympathetic activation appears to be closely linked to pulmonary arterial pressure, independently of heart failure etiology [19]. Regarding the mechanisms responsible for the neuroadrenergic overdrive characterizing heart failure, growing evidence supports the notion that the central sympathoinhibitory effects exerted by nitric oxide appear to be impaired in this condition, presumably because of a decrease in the availability of neuronal nitric oxide synthase [20]. This represents the pathophysiological background for the finding that endothelial dysfunction appears to be a hallmark of the heart failure state. In this context, it is worth mentioning that both endothelial (and more generally vascular) alterations and adrenergic overdrive share a common behavior. Namely, the alterations occur early in the clinical course of the disease, being detectable in a mild heart failure state (patients belonging to New York Heart Association functional classes I and II) and becoming more and more pronounced as the clinical severity of the disease increases ( Figure 1 ) [21]. 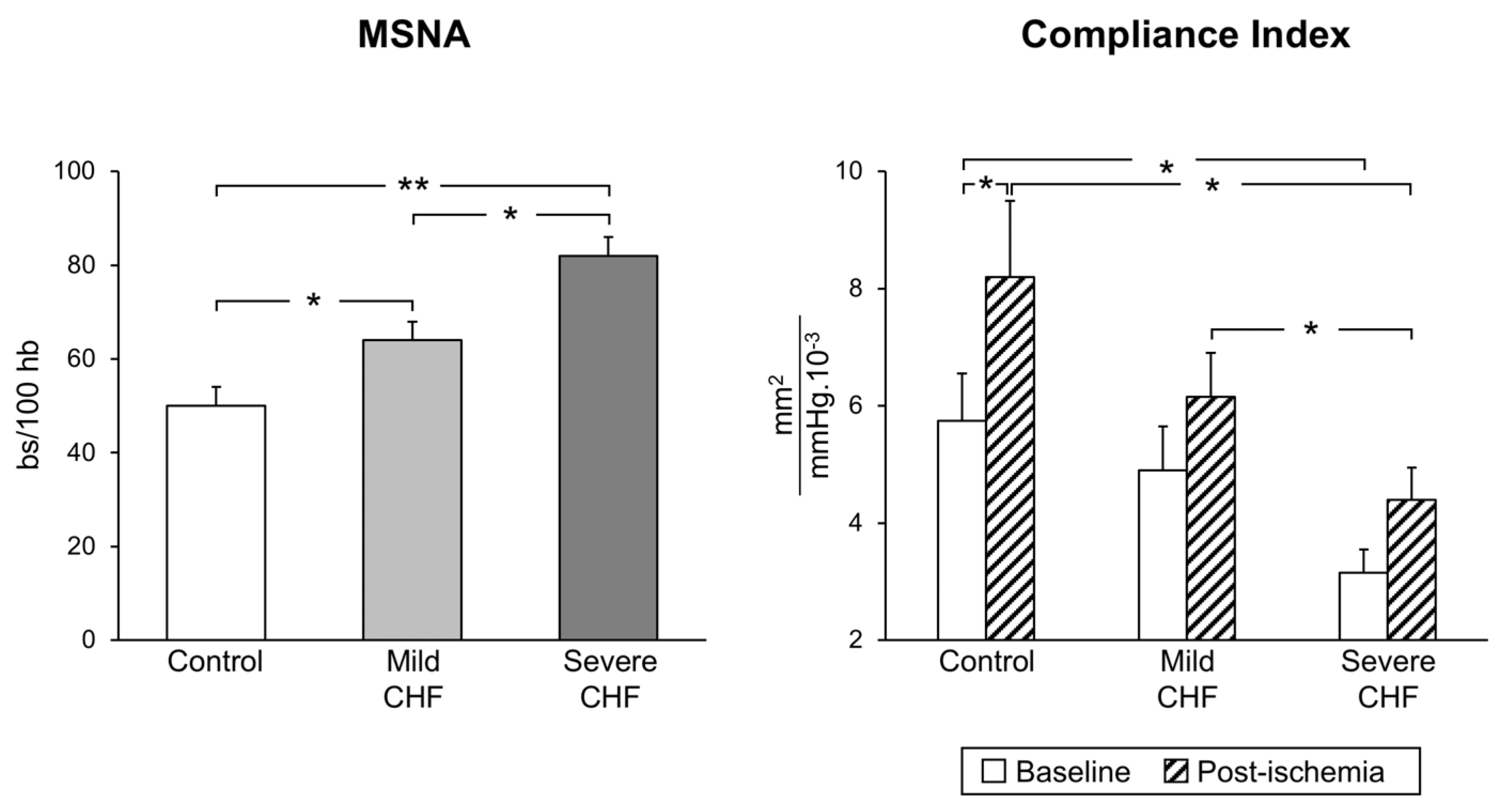 An intriguing question is whether and to what extent the sympathetic abnormalities described in hypertension and in congestive heart failure can be reversed by drug treatment. Evidence has been provided that different pharmacological interventions may favor a partial restoration (although not a full normalization) of the sympathetic abnormalities described in the abovementioned clinical conditions [18][22]. This may particularly be the case for drugs, such as angiotensin-converting enzyme inhibitors, angiotensin II receptor blockers and, among beta blockers, nebivolol, which combine the sympathomoderating effects with a favorable action on nitric oxide.

Cardiometabolic diseases characterized by a marked sympathetic activation, such as obesity and metabolic syndrome [23], also display profound alterations in the structural and functional characteristics of large and medium arteries. These abnormalities, which include an increase in arterial stiffness, a reduction in arterial distensibility and an impairment of endothelial function, have also been reported in small resistance arteries [23][24]. Given the close relationship found between the functional and structural alterations described in the coronary and subcutaneous small arteries, these vascular and endothelial abnormalities may have important implications for the progression of organ damage related to cardiovascular risk factors and for determining cardiovascular prognosis [25].

Despite the remarkable achievements in understanding the relevance of sympathetic–vascular interactions in the clinical arena, a number of issues remain still controversial, which will be targets of future investigations. These include the potential relevance of the genetic background in the modulation of endothelial and sympathetic functions and their interactions [26]. They will also include the participation of immune mechanisms in the vascular–sympathetic crosstalk [27]. A further area of future research is represented by an in-depth investigation on how the sympathetic–vascular interactions may participate in determining the so-called “residual cardiovascular risk”, i.e., the risk of incidence of vascular events or progression of established vascular damage persisting in patients despite treatment with current evidence-based recommended care [1][13]. Among the various factors responsible for the phenomenon, a likely one is represented by the finding that pharmacological interventions, although able to correct the sympathetic and endothelial abnormalities reported in cardiovascular disease, are unable to achieve complete normalization of the neuroadrenergic–vascular functions, with adverse consequences for cardiovascular health [28]. This conclusion may be extended to some of the cardiovascular-device-based interventions recently introduced for the treatment of cardiovascular disease (hypertension and heart failure in particular), such as renal nerve ablation and carotid baroreceptor stimulation, which have been shown to exert not always univocal effects on sympathetic and vascular endothelial function [9][15]. Future studies are thus needed also in this specific new area of cardiovascular therapeutic intervention.