Submitted Successfully!
Thank you for your contribution! You can also upload a video entry related to this topic through the link below:
https://encyclopedia.pub/user/video_add?id=13845
Check Note
2000/2000
Pluripotency
Edit
Upload a video
This entry is adapted from 10.3390/cells10082049

Following fertilization, in the mammalian embryo, a series of programmed cell divisions occur whereby the arising cells progressively acquire their own cellular and molecular identity, and totipotency narrows until when pluripotency is achieved. The path towards pluripotency involves transcriptome modulation, remodeling of the chromatin epigenetic landscape to which external modulators contribute. Both human and mouse embryos are a source of different types of pluripotent stem cells whose characteristics can be captured and maintained in vitro.

The ability of a cell to differentiate and give rise to different specialized cell types represents the cell potency. Thus, depending on a cell’s differentiation potential, potency spans from totipotency, pluri-, multi-, oligo- or uni-potency [1][2]. The fusion of two highly differentiated cells, an oocyte with a spermatozoon, gives rise to the zygote, a single totipotent cell, which has the capability to develop into an entire, fully functional organism. Then, as development proceeds, totipotency becomes restricted at stages that vary among species.

In the mouse, following the first cell division, the blastomeres of 2-cell stage embryos may not be equally totipotent. Unequal segregation of the zygote cytoplasmic components [3] may influence totipotency continuity in the blastomere pairs. Then, embryonic cells evolve towards pluripotency while the embryos undergo through cellular events that occur at specific time points after fertilization. At 2.5 days post coitum (dpc), 8-cell stage embryos undergo compaction, followed by morula cavitation and blastocyst formation (3.5 dpc), the latter constituted of an outer single-layered epithelium, the trophectoderm (TE) and an inner cell mass (ICM) facing a fluid-filled cavity (first lineage specification) ( Figure 1 ). While the TE forms the fetal component of the placenta, the ICM, initially made of common progenitor cells [4], gives rise, through a second lineage specification, to the epiblast (EPI) and the primitive endoderm (PrE) ( Figure 1 ) [5]. During this time window, EPI cells become pluripotent, i.e., able to develop into ectoderm, mesoderm and endoderm (the three germ layers), to the germ line and to the extraembryonic ectoderm and mesoderm. At 4.5 dpc, following hatching from the zona pellucida, the mature blastocyst implants into the endometrium and gastrulation will then follow at 6.5 dpc. 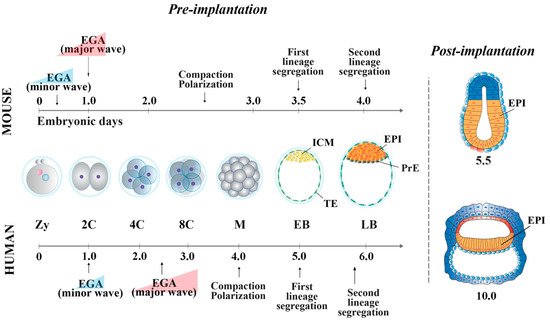 Figure 1. Mouse and human embryonic development from the zygote to early post-implantation stages. Zy, zygote. C, cell. M, morula, EB, early blastocyst. LB, late blastocyst. ICM, inner cell mass. TE, trophectoderm. EPI, epiblast. PrE, primitive endoderm (5.5 dpc and 10 dpf embryos images were redrawn and modified from [6]).
The embryo cell potency can be captured and transferred in vitro, and both human and mouse peri-implantation embryos are a source of different types of pluripotent stem cells (PSCs), whose characteristics depend on the developmental stage of the embryo. The first lines of stem cells (SCs), named embryonic stem cells (ESCs), were derived from the ICM of mouse 3.5–4 dpc blastocysts in 1981 by Martin [7] and by Evans and Kaufman [8] and, 17 years later, from the ICM of human 5 dpf blastocysts by Thomson and colleagues [9]. In 2007, mouse epiblast stem cells (EpiSCs) were originally derived from the EPI, dissected from 5.5 dpc [10] or 5.75 dpc [11] post-implantation embryos. Following these first studies, EpiSCs were also derived from embryos up to 8 dpc [12]. Although strongly influenced by culture conditions [13], ESCs and EpiSCs represent an extraordinary tool for understanding cell pluripotency, the mechanisms that underlie its identity, maintenance and evolution. These mechanisms include the fine regulation of transcriptional networks, epigenetic landscapes, families of RNAs and several inter-related molecular pathways.

From the morula stage, lineage specification and differentiation are accompanied by a decrease of global cell potency, the latter achieved through a precise spatio-temporal activation of key genes [14][15]. At this stage, the first lineage specification is determined by several regulatory pathways [16][17][18][19][20]. In outer cells, the inactivity of the Hippo pathway allows the expression of Cdx2 and Gata-3 , which together with Notch , Eomes and Elf5 contribute to the establishment of TE fate [21][22]51,[23][24][25][26][27][28]. In the inner cells, the Hippo pathway is activated, allowing transcription of ICM-specific genes (e.g., Oct-4 , Nanog , Sox2 and Esrrb) [29]. Mouse ICM is composed by heterogeneous cells, which co-express different levels of lineage-associated factors, such as Gata-6 (PrE) and Nanog (EPI) [30][31].

At the blastocyst stage, cells of the ICM undergo a second lineage specification determined by the FGF/FGF-receptor signaling, mediated via MEK/ERK [32][33]. Gata-6 and FGF/ERK induce PrE fate [24][34][35], whereas Gata-4 and Sox17 are involved in its maintenance [34][36]. EPI cells are characterized by the expression of Oct-4, Nanog, Sox2, Kfl2, Klf17 and Esrrb, all involved in pluripotency maintenance [21][37][24][38]. Specifically, the establishment and maintenance of the pluripotency state is characterized by a well-defined “pluripotency gene regulatory network” (PGRN) and by a strong cooperation of transcription and epigenetic factors that act in synergy [39][40]. The PGRN is a very highly interconnected system, in which Oct-4, Nanog and Sox2 represent the central functional core. Among this triad of genes, Oct-4 is at the top of the pluripotency regulatory hierarchy, being essential to reach and maintain pluripotency [41][42][43].

In human embryos, at the compacted morula stage (4 dpf), both specific TE determinants and ICM-related genes are expressed to determine the first lineage specification [66]. The lineage-specific transcripts become mutually exclusive only at the early blastocyst stage (5 dpf). However, it has been shown that 5 dpf TE cells still retain the ability to form ICM cells [92], and, conversely, isolated ICMs can also generate TE cells [93], indicating that cells at this stage of development are not yet fully committed. The specification of the cell lineages does not seem to occur through a stepwise process, as for the mouse [66], with transcriptional differences being detected at 5 dpf, once the blastocyst is formed. Additionally, it is unclear whether Hippo pathway determines the first cell fate decision [55,94]. GATA-3 and CDX2 are also involved in TE cell determination [53,56,95]. Then, a second lineage specification occurs, where human EPI cells display the expression of NANOG, OCT-4 and SOX2, all required for pluripotency maintenance, and of KLF17 [24][38][44]. GATA-6, initially broadly expressed in the early blastocysts, is involved in PrE fate induction [27][34], together with SOX17 and GATA-4. These latter two are expressed later and are restricted to the PrE, where they are required for its maintenance [24][34].

During the early phases of development, molecular modifications, e.g., DNA methylation, histone methylation and acetylation, and, for female embryos, the progressive silencing of X-linked genes for dosage compensation, determine specific epigenetic landscapes, which contribute to the progressive acquisition of pluripotency.

SCs, isolated either from embryos at different stages of pre- and early post-implantation development or from PSC lines, can be maintained in vitro applying self-renewal culture conditions [45][46] and possess cellular and molecular features that mirror different pluripotency states, defined as extended, naïve, intermediate and primed. They are characterized by distinguishable colony morphology, growth factor requirement, energetic metabolism, molecular signatures and, in the female cell lines, X inactivation status [40][47][48].

Mouse ESCs retain the same molecular and transcriptional features of the EPI cells present at 4.5 dpc pre-implantation embryo stage [49], with a pluripotency characteristic called “naïve” [47] (Figure 2). When injected in early pre-implantation embryos, naïve mESCs contribute to all somatic lineages and to germline, indicative of their pluripotency in vivo [50]. Mouse ESCs are in an unstable balance between pluripotency and differentiation signals, which support self-renewal (maintained by LIF) or promote differentiation (induced by FGF). However, the addition of exogenous LIF favors self-renewal at the expense of differentiation [51]. In recent years, SCs, derived from either 5–6.5 dpc mouse embryos or naïve ESCs, have been shown to possess intermediate states of pluripotency between naïve and primed. These transition pluripotency states are defined as “poised” [52], “rosette” [53] or “formative” [54][55][56][57] (Figure 2). These cells, while downregulating the naïve transcriptional program, begin to acquire the competence for multi-lineage differentiation, although they do not yet express lineage-associated markers. Mouse EpiSCs, derived from the EPI of post-implantation embryos at 6.25–8 dpc, are characterized by a pluripotency status named “primed”. As naïve mESCs, primed mEpiSCs display unlimited potential to self-renewal and differentiate into the three germ layers in vitro, but they are limited in their pluripotency in vivo, as they cannot give rise to blastocyst chimeras [10][58][59]. 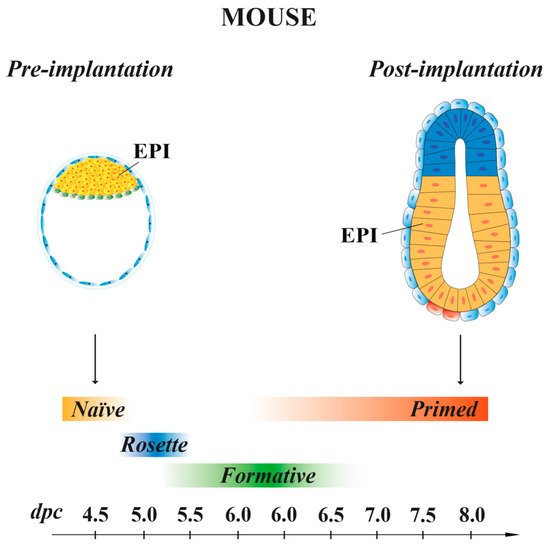 Figure 2. Pluripotency status of stem cells (SCs) derived from 4.5–8 days post coitum (dpc) embryos. ESCs derived from the mouse blastocyst have a naïve pluripotency; EpiSCs derived from post-implantation embryos have a primed pluripotency. SCs derived from either 5–6.5 dpc mouse embryos or naïve ESCs possess rosette or formative pluripotency, intermediate between the naïve and primed pluripotency. EPI, epiblast.
The first derived human ESC (hESC) lines showed primed pluripotency [10][60][61][62][63]. Many efforts were made to obtain hESCs with naïve pluripotency. In a series of studies, naïve pluripotency has been successfully acquired from the conversion of primed hPSCs [64][65]. In other studies, naïve pluripotency was captured from embryos and maintained in vitro following the development of specific derivation and culture protocols [65][66][67][68][69][70]. Similar to the mouse, naïve and primed hESCs display some differences in their transcriptional networks [249]. When analyzed with single-cell RNA sequencing, naïve and primed populations present different transcriptomes, but all naïve cell lines analyzed are homogeneous among themselves, as well as primed cell lines.
The Oct-4, Sox2 and Nanog triad represents the core of both naïve and primed mouse and human pluripotency networks. The triad is conserved between mouse and human, but few interactor genes are shared between the two species. In naïve PSCs, interactor genes, which relate to the triad, are also expressed in EPI cells, while, in primed PSCs, interactors are also found expressed in mesoderm, endoderm and ectoderm germ layers, suggesting that the different pluripotency states are sustained by dissimilar molecular networks, which also change between the two species.

More
© Text is available under the terms and conditions of the Creative Commons Attribution (CC BY) license (http://creativecommons.org/licenses/by/4.0/)
Upload a video for this entry
Information
Subjects: Cell Biology
Contributor MDPI registered users' name will be linked to their SciProfiles pages. To register with us, please refer to https://encyclopedia.pub/register :
Paola Rebuzzini
View Times: 57
Revisions: 5 times (View History)
Update Time: 03 Sep 2021
Table of Contents
1000/1000
Hot Most Recent