Submitted Successfully!
Thank you for your contribution! You can also upload a video entry related to this topic through the link below:
https://encyclopedia.pub/user/video_add?id=13814
Check Note
2000/2000
Black Phosphorus
Edit
Upload a video
This entry is adapted from 10.3390/pharmaceutics13091344

Black phosphorus (BP) is one of the emerging versatile nanomaterials with outstanding biocompatibility and biodegradability, exhibiting great potential as a promising inorganic nanomaterial in the biomedical field. BP nanomaterials possess excellent ability for valid bio-conjugation and molecular loading in anticancer therapy. Generally, BP nanomaterials can be classified into BP nanosheets (BPNSs) and BP quantum dots (BPQDs), and both of them can be oxidized and degraded to nontoxic phosphonates and phosphate under physiological conditions, improving their safety as a nano drug carrier in cancer therapy. In addition, BP nanomaterials can be applied as photothermal agents (PTA) for photothermal therapy (PTT) and photodynamic therapy (PDT) due to their high photothermal conversion efficiency, large extinction coefficients, and capability of producing singlet oxygen. Recently, it has been reported that BP-based phototherapy is capable of activating immune responses and alleviating the immunosuppressive tumor microenvironment by detection of T lymphocytes and various immunocytokines, indicating that BP-based nanocomposites not only serve as effective PTAs to ablate large solid tumors but also function as an immunomodulation agent to eliminate discrete tumorlets.

Cancer is a deadly disease that severely threatens public health. Despite the rapid development of modern medicine, effective treatment methods toward cancer are still insufficient. Lack of stability, unsatisfactory therapeutic outcome, unavoidable side effects, and potential drug resistance are typically the main reasons that lead to the failure of anticancer therapy [1]. Nowadays, more and more attempts based on precise drug delivery have been made to ameliorate cancer treatment efficacy. Nanomaterial-based platforms have been widely studied in drug delivery due to their unique properties. They are effective carriers of multiple therapeutic and diagnostic agents due to plenty of advantages, such as localized drug delivery ability, enhanced bioavailability, reduced systemic toxicity, and improved pharmacokinetics through their tunable physicochemical characteristics [2][3]. In addition, nanomaterial-based platforms have captured the researchers’ attention worldwide in the field of both immunotherapy and phototherapy during cancer therapy. For instance, nanomaterials that incorporate immunomodulatory agents such as peptides, nucleic acids, immune checkpoint inhibitors, and other small immunostimulating agents can activate immune cells and modulate the tumor microenvironment to enhance anticancer immunity [4]. Furthermore, nanomaterials also protect sensitive antigens or proteins from degradation or inactivation in the complex physiological environment during cancer immunotherapy. However, insufficient biocompatibility, low biodegradability, and inadequate drug loading ability are the major limitations for the broad application of these nanocarriers [5][6][7]. Therefore, it is essential to adopt a suitable nanoplatform with better anticancer efficacy and fewer aforementioned limitations.
From all the nanomaterials, black phosphorus (BP) stands out as an excellent candidate in the biomedical field. BP is an allotrope of phosphorus which can be prepared through the conversion of white phosphorus (WP) or red phosphorus (RP) under high pressure and high temperature [8]. Nano-scaled BP was firstly synthesized by Li et al. in 2014 [9]. Recently, nano-scaled BP has been obtained through various types of synthesis routes including ultrasonic-assisted liquid-phase exfoliation, wet ball milling, and the solvothermal method. Due to the numerous advantages possessed by BP, it is widely applied in various field such as nanomedicine, detection and sensing, photocatalysts, and optical modulation [10]. Currently, the application of BP as nano drug carriers in anticancer therapy has attracted many researchers’ attention. According to Figure 1, with the property of broad visible absorption band and unique electronic structure, nano-scaled BP exhibits outstanding photothermal conversion efficiency and photosensitivity, which enables it to produce an excellent photothermal and photodynamic effect during cancer therapy, subsequently leading to the devastation of tumor tissue [11]. Moreover, the puckered structure of nano-scaled BP endows it with a huge specific surface area, offering it with a high drug loading ability [12]. In addition, BP can be degraded into nontoxic phosphonates and phosphate after the reaction with water and oxygen in vivo, and coincidentally, phosphorus is an important element that exists abundantly in the human body for osteogenesis, which broadens its application as a kind of biodegradable nanomaterial within the body [13]. From all these mentioned above, BP can be regarded as a safe and multifunctional nanoplatform for anticancer drug delivery [14][15]. 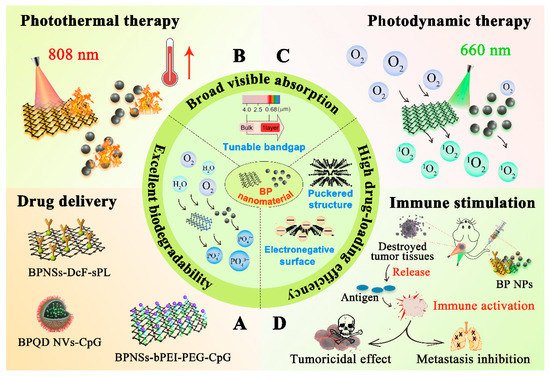 Figure 1. Schematic illustration of the outstanding properties of BP nanomaterials and their applications in anticancer therapy. (A) BP nanomaterials are ideal nano drug carriers with excellent agent-loading ability in drug delivery due to their puckered structure, electronegative surface, and excellent biodegradability. (B) BP nanomaterials exhibit an outstanding photothermal effect under 808 nm laser irradiation due to their broad visible absorption, leading to hyperthermia and the subsequent tumoricidal effect. (C) Due to the unique electronic structure, BP nanomaterials show excellent photodynamic effect under 660 nm laser irradiation, producing large amount of singlet oxygen in local tumor, and eventually leading to tumor destruction. (D) Both PTT and PDT can induce immunogenic cell death (ICD) when irradiating the tumor in situ at specific wavelength. Antigens are released in large quantities from the destroyed tumor tissue, which can strongly activate tumor immunity for further producing tumoricidal effect and inhibiting tumor metastasis.
However, there are still some obstacles that impede the wide application of BP nanomaterials. For instance, due to its easy reaction with oxygen or water in ambient conditions, the stability of BP is not so good [16]. Surface modification is a suitable solution to prevent BP nanomaterials from being degraded. After the surface functionalization through physical or chemical modification, oxygen or water can be effectively separated from BP nanomaterials, which prevents them from degradation and ensures their original physiochemical properties [17]. Moreover, surface functionalization also endows BP nanomaterials with other properties, such as stronger drug-binding ability, precise tumor-targeting ability, long in vivo circulation time, and enhanced dispersity under physiological conditions. Besides, as an electronegative nano drug carrier with high drug-loading ability, numerous types of positive-charged agents can be loaded onto the surface of BP nanomaterials through electrostatic interaction [18]. The loading of chemotherapeutic drugs and immunostimulatory agents through BP nanomaterials can guarantee the stability of them with a simultaneously reduced administered dosage and corresponding potential side effects.
Currently, the dominated treatment modalities to cancer in clinic are surgery, chemotherapy, and radiotherapy. These cancer therapies aim to eliminate cancer cells but do so at the same expense of normal cells, which sometimes causes serious side effects, accelerating the cancer development in turn. Therefore, a number of newly developed therapeutic strategies including targeted therapy, immunotherapy, gene therapy, and phototherapy have been selectively adopted or in clinical trials [19]. In particular, cancer immunotherapy, which can either instigate or enhance the host immune response to track and destroy cancer cells, has gained considerable attention. Recently, many immunotherapy approaches including monoclonal antibody (mAb) therapy, cytokine therapy, tumor vaccination, checkpoint blockade, and chimeric antigen receptor (CAR) T-cell therapy have been used in clinical studies to treat cancer metastasis [20]. However, many cancers are inherently immunosuppressive and are difficult to control through current immunotherapy [21]. Hence, the combination of topical therapy, such as phototherapy, with immunotherapy can cleverly overcome these limitations as well as amplify the merits of the therapeutic efficacy, which could not only maintain the advantages of immunological approaches, such as systemic immune activation and long-term anticancer immunity, but also increase the selectivity of the overall treatment [22].
Phototherapy, including photothermal therapy (PTT) and photodynamic therapy (PDT), is a non-invasive or slightly invasive therapeutic approach that utilizes laser to deliver energy to the target tissue, providing an alternative solution for primary tumor ablation due to its high specificity in light delivery, low degree of trauma, and effectiveness in destroying the target tumor [23][24]. Near-infrared (NIR) light has been widely applied as the light source for phototherapy due to its deep penetration ability into biological tissues. NIR light can be applied in phototherapy through in situ administration with natural absorbance agents such as photoactive agents or photosensitizers [25]. These photoagents can convert absorbed photon energy into thermal energy, which is termed as PTT for the hyperthermia treatment of cancers, or absorb the specific light energy to generate cytotoxic reactive oxygen species (ROS), which is known as PDT [26]. Therefore, to achieve the goal of eradicating primary tumors and relieving metastasis, a strategy called photoimmunotherapy (PIT) that combines phototherapy and immunotherapy has emerged [27]. PIT is a synergistic treatment approach of which the advantages of both phototherapy and immunotherapy will be augmented while the inherent shortcomings are minimized. As is shown Figure 1D, this combined therapy modality can not only eliminate the primary tumor and clear up residual tumor cells, but also track the metastatic or distant sites, providing more possibilities for patients with advanced tumors.

BP possesses a highly thickness-dependent direct bandgap, varying from 0.3 eV for bulk BP to 2.0 eV for nano-scaled BP [30]. To BP nanosheets (BPNSs), the optical bandgap can be finely tuned by regulating the number of layers, which allows BPNSs to absorb a broad range of wavelengths. Additionally, BP nanomaterials exhibit a large NIR extinction coefficient and high photothermal conversion efficiency. As a result, BP nanomaterials can serve as effective PTA for PTT [31]. Therefore, the energy of incident light can be converted to heat through BP nanomaterials, thereby leading to photothermal ablation of tumors under NIR irradiation [32]. Besides, upon illumination, the energy from the excited excitons of BP nanomaterials can be transferred to the surrounding O2, which subsequently leads to the change of O2’s electronic configuration [33]. Furthermore, eventually, singlet oxygen (1O2) can be generated at a high level, which is the key factor for PDT-induced tumor cell apoptosis [34].

As one of the most common bio-components existing in human body, phosphorus makes up approximately 1% of the overall body weight and this important element is closely connected to the formation of cell membranes and deoxyribonucleic acid (DNA), as well as the mineral components of hard tissue [35]. The lone-pair electrons on each phosphorus atom cause the relatively high reactivity of BP toward water and oxygen, leading to the subsequent degradation of BP into nontoxic phosphates (PO43−) and other PxOy species in the physiological environment [36][37]. The PO43− traps the surrounding positive calcium ions (Ca2+) to form calcium phosphate (CaP), which can facilitate local biomineralization for in situ bone regeneration [38]. Although analogs of PO43− are the common form of existence for molecules containing phosphorus in our body, transient elevation of cytosolic PO43− can affect oxidative stress, inhibit proliferation of cancer cells, and eventually induce apoptosis [39].

As a novel drug delivery carrier, BP nanomaterials exhibit high drug-loading capacity because of the corrugated crystalline and textural properties [40]. Nano-scaled BP possesses a puckered structure, endowing it with a large surface area-to-volume ratio to load therapeutic drugs with high efficiency [41]. For example, Zhou et al. constructed a BPNSs-based complex loading CRISPR-associated protein 9 (Cas9) ribonucleoprotein with high loading efficiency, which showed a remarkable Cas9 ribonucleoprotein loading capacity of 98.7% on BPNSs [42]. In addition, doxorubicin (DOX) was absorbed onto BPNSs via electrostatic interaction by Chen et al., and the drug-loaded nanosheets even showed 950% loading capacity for DOX in weight, which was higher than any previously reported nanomaterials [23].

More
© Text is available under the terms and conditions of the Creative Commons Attribution (CC BY) license (http://creativecommons.org/licenses/by/4.0/)
Upload a video for this entry
Information
Subjects: Nanoscience & Nanotechnology
Contributor MDPI registered users' name will be linked to their SciProfiles pages. To register with us, please refer to https://encyclopedia.pub/register :
Yijun Mei
View Times: 75
Revisions: 2 times (View History)
Update Time: 02 Sep 2021
Table of Contents
1000/1000
Hot Most Recent