Submitted Successfully!
Thank you for your contribution! You can also upload a video entry related to this topic through the link below:
https://encyclopedia.pub/user/video_add?id=13774
Check Note
2000/2000
CYP3A4
Edit
This entry is adapted from 10.3390/pharmaceutics13081261

CYP3A4 is a low specificity isoenzyme of the CYPs family, which contributes to the metabolism of approximately 50% of all marketed drugs. Induction or inhibition of CYP3A4 activity results in the varied oral bioavailability and unwanted drug-drug, drug-food, and drug-herb interactions.

Failed drug therapy due to unintended drug-drug interactions occurs widely in clinical medicine and could impact drug efficacy and safety [1][2][3]. According to the World Health Organization, the annual financial cost of medically-related harm globally is approximately $42 billion USD [4]. In order to exert a therapeutic effect, drugs must be absorbed via a certain route of administration, such as oral, intravenous, intramuscular, nasal and subcutaneous, among which oral delivery is the most preferred method due to several well-recognized reasons, including convenience, non-invasiveness, extended drug release, suitability for long-acting medication and a long shelf-life [5][6], but the liver and small intestine constitute the main sites of drug metabolism, leading to pharmacokinetic (PK) variability (i.e., different drug concentrations in the blood or at sites of action) [7][8]. Special populations, such as the elderly, children, women, pregnancy, hospitalized patients and even certain ethnicities, are particularly vulnerable to certain prescribed oral medication(s), because their physiological differences (e.g., metabolism) and/or ongoing life circumstances (e.g., polypharmacy, comorbidities) may result in unpredictable drug-drug interactions [9].

Before reaching the target site of action, orally administered drugs encounter a host of obstacles in the gastrointestinal tract (GIT), such as a substantially changing pH in the stomach, upper and lower intestinal segments, extensive enzymatic degradation (e.g., lipase, trypsin, amylase), varied GI motility (e.g., gastric emptying, peristalsis), complex bacterial diversity and physical barriers of the mucus and mucosal layers [10][11]. Among those complex GIT environmental factors, pre-systemic metabolism of Cytochrome P450 (CYPs) enzymes expressed in the intestine and liver is the main factor that significantly contributes to the variability in drug response [12]. Particularly, out of all the CYPs involved in human drug biotransformation, CYP3A4 is the most important oxidation enzyme by virtue of the fact that at least 50% of marketed drugs metabolized by CYPs are metabolized by CYP3A4 [8][13]. The amount and activity of CYP3A4 is considerably regulated by inflammation, fasting state and a broad spectrum of xenobiotics, including top prescribed pharmaceuticals (e.g., midazolam, felodipine), common foods (e.g., grapefruit juice) and widely used herbal medicines (e.g., St. John wort (SJW)) [14][15][16] ( Figure 1 ). However, drug development selects the most effective and safe dose in the study population (not the individual) without any regard for such drug response variability due to CYP3A4 metabolism, as it is impractical to investigate many different doses in different patients. Yet, from a clinical medicine point of view, “one-dose-fits-all” regimen can be potentially dangerous for patients as huge inter- and intra-individual variability in CYP3A4 may lead to varied systemic drug concentrations, in turn, causing unpredictable therapeutic outcomes and intolerable adverse effects [17]. 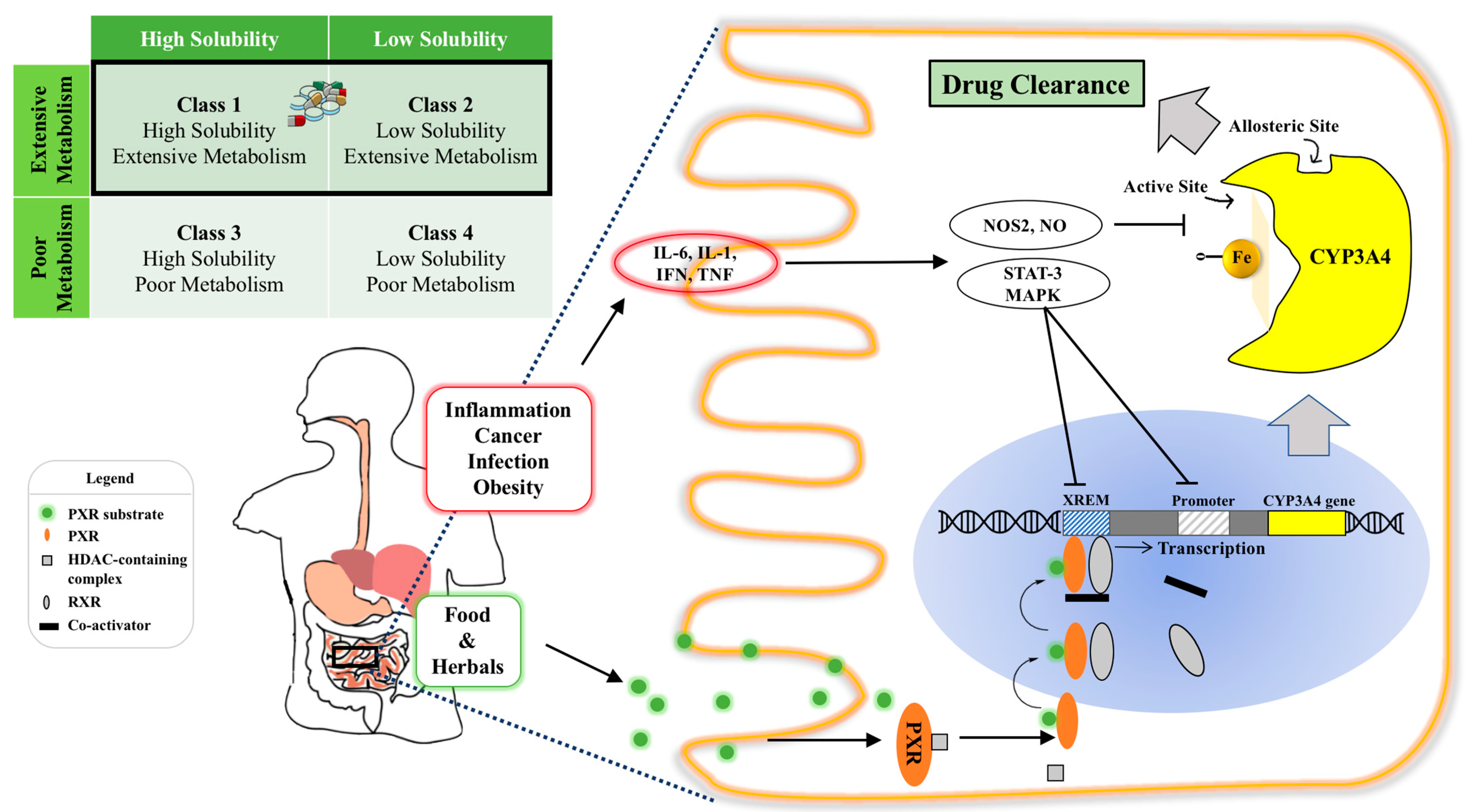 Despite incongruity between industrial and clinical sectors in how to determine drug dosing, for most drugs, the prediction of their in vivo efficacy and toxicity relies on free (i.e., bioavailable) drug concentration at the site of action [18]. However, before reaching systemic circulation, the passage of orally administered drugs through the GIT could be attenuated by the presence of drug transporters (e.g., P-glycoprotein (P-gp)) and metabolizing enzymes (e.g., CYP3A4) in the small intestine. The additional barrier of first-pass metabolism, as the portal vein flows through the liver, also contributes to drug elimination.

Once systemically available, drugs may partition into other tissues such as the lung and heart, depending on their physiochemical properties such as lipophilicity. In addition, food intake has a strong effect on the extent of oral drug absorption [19][20][21]. Particularly, postprandial state with a high fat meal can have both positive and negative impact on the drug bioavailability by altering the dissolution, the rate and extent of absorption [22]. Ingested dietary lipids (e.g., triglyceride, monoglyceride, fatty acids) are known to increase dissolution and solubilization of lipophilic compounds with log P > 5, modulate GIT transit and inhibit CYPs activity [22][23]. Because of this, the U.S. Food and Drug Administration (FDA) has issued guidance for “Food-Effect Bioavailability and Fed Bioequivalence Studies” to label some medications that are strongly influenced by a meal [24]. All of these factors could confound the predication of a therapeutically relevant dose, and partially attribute to the decline in accumulative clinical success rate (i.e., ~11.6%) [25][26]. As a result, the question of whether adequate drug concentrations at the target have been achieved may underpin variability in drug response.
The influence of those physiological GIT barriers (e.g., CYP3A4, pH) as well as extrinsic regulatory variables (e.g., diet, health conditions) on absorbed drug concentrations can be largely determined by the properties of the oral dosage form, which in turn depends on its design and manufacture [27]. For example, in a randomized crossover study, Mueller et al., compared two marketed cyclosporin formulations, Sandimmune vs. Sandimmune Neoral®, and found that the long chain triglyceride-based Neoral® was much less influenced by fat-rich meals, indicating that lipid-based formulations to deliver the drug was advantageous when individualizing a dosage regimen [28][29]. Especially, lipid-based formulations, which account for approximately 2–4% of the pharmaceutical market, represent one of the most popular approaches to improve the solubilization of poorly water-soluble compounds and to overcome the GIT barriers. Pharmaceutical grade lipid excipients in lipid-based formulations are physiological or physiologically related, including fatty acids (e.g., oleic acid, myristic acid), ethyl esters (e.g., ethyl oleate), triglycerides of long- or medium- chain fatty acids (e.g., corn oil, Miglyol®), and non-digestible mineral oil [30]. The intraluminal process (e.g., bile salts) of ingested lipids from formulations forms solubilised phases to facilitate the drug absorption [30][31].
Among diverse lipid-based formulations, lipid-based nanosystems (LNS) have been an ever-growing segment of pharmaceutics that primarily involves FDA’s Biopharmaceutics Classification System (BCS) Class 2 & 4 drugs with low solubility and/or poor permeability [32]. LNS encompasses various subtypes with different nanostructures, including solid lipid nanoparticles (SLN), liposomes, nanostructured lipid carriers (NLC), polymer-lipid hybrid nanoparticles (PLN), and self-nanoemulsifying drug delivery systems (SNEDDS) [33][34][35][36][37]. Because of combined attributes of both lipidic carriers and nanosized particles, LNS can facilitate the delivery of active pharmaceutical ingredients (API) into the blood circulation via either the hepatic portal vein or the GIT lymphatic system [38]. Particularly, for LNS containing triglycerides, cholesterol esters or long chain fatty acids, they are incorporated into the large lipoprotein chylomicrons (75–1200 nm) upon re-esterification and preferentially trafficked via the intestinal lymphatic system, thus effectively evading first-pass metabolism in the liver [39]. In recent years, an increasing body of evidence has shown that certain components (e.g., surfactants, lipids and polymers) used in LNS can reduce intra-enterocyte metabolism [40]. Using CYP3A4 substrate midazolam as the probe, studies of effects of common surfactants, co-solvents and oils (e.g., Tween, PEG, poloxamer, oleic acid) on the drug disposition found 68.2% of tested excipients significantly inhibited CYP3A4 biotransformation activities [41][42]. In addition, with advancing nanotechnology, LNS can be adapted by modulating their lipid composition and decorating them with polymers or ligands to target different regions of the GIT, in order to achieve a controlled, sustained, and targeted drug delivery [43].

Many drugs are victims of CYP3A4 interactions. Unfortunately, interactions with CYP3A4 restrict the clinical use for these drugs that ultimately impact patient treatments. If these drugs can be formulated to avoid CYP3A4 binding, then they can be successfully used in therapy. Many lipid-based, polymeric and inorganic drug carriers have been used clinically and experimentally with great success to overcome the limitation of free therapeutics (e.g., solubility) and heterogenous biological barriers (e.g., systemically, microenvironmentally, and cellularly) across patient populations and diseases because of their capability of being engineered in a more personalized manner [44]. Figure 2 illustrates three potential approaches of orally administered LNS to address enterocytic CYP3A4 metabolism and in turn, drug-response variability. 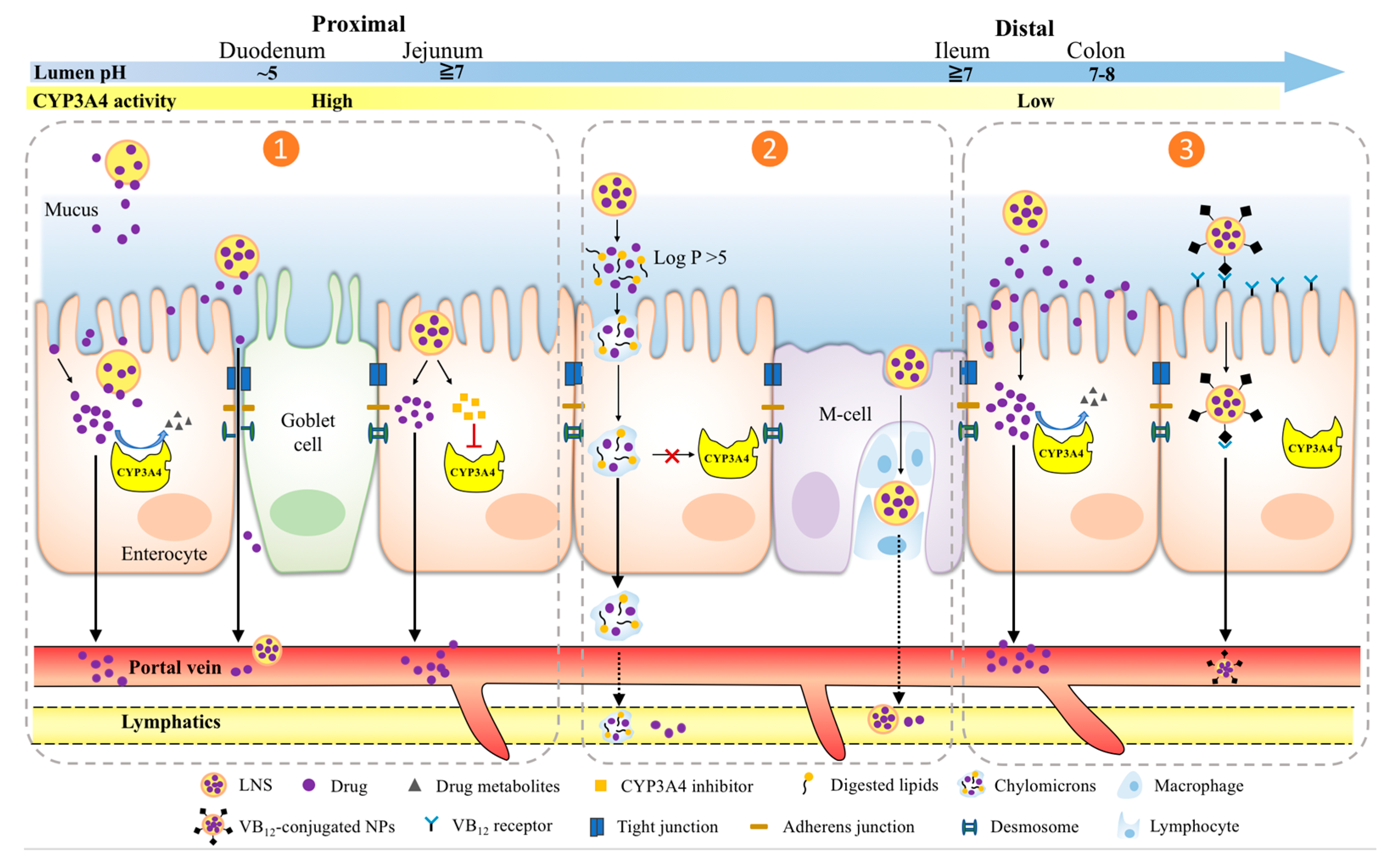