Submitted Successfully!
Thank you for your contribution! You can also upload a video entry related to this topic through the link below:
https://encyclopedia.pub/user/video_add?id=13690
Check Note
2000/2000
Phenolic Composition of Grape Stems
Edit
This entry is adapted from 10.3390/biom11081221

Grape stems are a by-product from the wine industry that has been underused to date despite having great potential for the agro-food, pharma and cosmetic industries. This entry statistical analysis revealed that the influence of environmental factors such as light, temperature and precipitations have different impact on the synthesis of polyphenols depending on the family of the specific compound.

The agricultural sector and the agro-food industry generate a large quantity of problematic residues because of their high humidity and also their high content of organic matter. One of those industries corresponds to the wine industry, that produces high levels of waste, which is a major problem and concern from both economic and ecological point of view [1]. The main by-products of this industry include grape stems, skins and seeds, that involves 20% of the weight of the processed grapes [2]. Currently there exist innovative applications for the use of these residues, including the use of grape skins for the production of infusions [3], food supplements [4] or as additives in the winemaking process itself [5]. Among them, grape stem are the least studied by-products despite representing a large amount of annual waste [6]. Usually, grape stems are used as organic fertilizer, as feed for ruminants [7] or valorized through the production of ethanol and paper pulp [8]. However, in recent years, several studies have demonstrated that these by-products contain high concentrations of polyphenols, cellulose, hemicellulose and lignin [9][10][11], which is causing a growing interest in their use as bioactive phytochemicals [12][13]. For instance, Leal et al. [14] found that stem extracts present antimicrobial activity, with high efficacy against ulcers produced by Gram-positive bacteria in foot wounds. In addition, they observed that these extracts have an anti-inflammatory capacity by inhibiting the production of nitric oxide by lipopolysaccharide-stimulated macrophages, and anti-aging effect by inhibiting the anti-tyrosinase and anti-elastase activities. Grape stem extracts have also been demonstrated to be a good therapeutic agent, as they possess antibacterial activity against a wide variety of pathogens, including Listeria monocytogenes, Staphylococcus aureus, Enterococcus faecalis, Escherichia coli, Pseudomonas aeruginosa and Salmonella enterica [15][16]. Other authors also found that the use of these by-products in food industry, in cosmetics and in products with pharmacological activity is interesting since they have potential antioxidant, antimicrobial, anti-inflammatory and anticancer activity, among others [17][18][19][20].
Several authors have demonstrated that the antioxidant activity of grape stem extracts is correlated with their phenolic composition [7][12][16][21][22]. There exist a large variety of phenolic compounds belonging to different families identified in grape stems. Among them, caftaric and gallic acids are the most representative phenolic acids found in grape stems, trans-resveratrol and ε-viniferin the two main stilbenes, quercetin derivatives the main flavonols, catechin and epicatechin the most abundant flavanols, and malvidin-3-glucoside and other malvidin derivatives are the anthocyanins most frequently identified in those by-products [9]. Despite this, Teixeira et al. [23] found that the composition and concentration of polyphenols on grape stems depend on the grape variety, ripeness, climatic and geographical growing conditions and cultivation practices. However, the magnitude of the influence of each parameter in the phenolic composition of grape stem it is not well known. There exist research works that studied the influence of the grape variety on the phenolic composition of grape stem extracts [21][24][25], but there are few studies that afford the influence of a relevant factor such as the vintage in the polyphenolic composition of grape stems. Recently, Blackford et al. [9] performed a compilation of the phenolic composition of different grape stems reported in the literature by different authors. In this work it is confirmed that there exist differences in the phenolic composition and antioxidant capacity among stems from different varieties and vintages. However, it is very difficult to compare the values obtained from different studies, since the extraction protocols are different, and, also, data are presented in different units. For this reason, the main objective of the present work is to know how the grape variety and the vintage can affect the phenolic composition of grape stem extracts from six varieties (Garnacha, Tempranillo, Mazuelo, Graciano, Chardonnay and Cabernet Sauvignon), all of them from the same geographical region, and three of them coming from two different vintages (Garnacha, Mazuelo and Tempranillo). The use of samples from the same geographical region will guarantee that the influence of soil, culture practices and climatic conditions will be very similar in all cases, so the use of the same extraction and analysis protocols will allow obtaining reliable information about the influence of the variety and vintage on the phenolic composition of grape stem extracts. 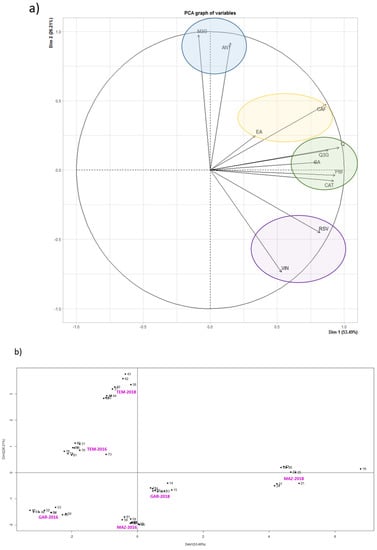 Figure 1. Principal component analysis (PCA) of phenolic compounds of grape stem extracts from Mazuelo, Garnacha and Tempranillo varieties from vintages 2016 and 2018. (a) Variables graph: GA (gallic acid); CAT (catechin); Q (quercetin); Q3G (quercetin-3-derivative); M3G (malvidin-3-glucoside); ANT (unknown anthocyanin); RSV (trans-resveratrol); VIN (ε-viniferin); CAF (caftaric acid); EA (elagic acid); PB1 (procyanidin B1); (b) Individuals factor map. Individuals (Mazuelo 2016 and Mazuelo 2018; Graciano 2016 and Graciano 2018; Tempranillo 2016 and Tempranillo 2018) are presented in pink color.
Nevertheless, and despite that the concentration of all variables increased from 2016 to 2018, the phenolic compounds contained in the third cluster were the most affected from the “vintage” factor. Therefore, gallic acid, quercetin, quercetin-3-derivative, catechin and procyanidin B1 presented the highest increase in concentration from 2016 and 2018, and this effect is particularly remarkable in Mazuelo stem extracts (Figure 1b).
On the other hand, it can be observed that both malvidin-3-glucoside and the unknown anthocyanin, which correspond to the first PCA cluster, are the compounds that best reflect the position of Tempranillo stem extracts in Figure 1b. It seems that grape variety has a more decisive influence on the concentration of these compounds in grape stems than vintage. Similar conclusions can be obtained for both stilbenes, as the variation in concentration levels of both trans-resveratrol and ε-viniferin is higher among varieties than between vintages. In the case of stilbenes, it also seems that these compounds are the phenolics least affected by weather conditions during grape development and veraison, since there has hardly been variation in their concentration from one year to another in any of the varieties studies in comparison with the rest of phenolic compounds analyzed.
In view of all these results, it could be concluded that the biosynthesis and accumulation of anthocyanins in grape stems between vintages is not correlated with either the behavior observed for the flavan-3-ols (catechin), proanthocyanidins (procyanidin B1), flavonols (quercetin and its derivative) and hydroxybenzoic acid (gallic acid), or the stilbenes (trans-resveratrol and ε-viniferin) analyzed in the present work, so they are not equally affected by the same factors.
Finally, it is noteworthy that the compounds corresponding to each cluster are related by its chemical structure. This could mean that the influence of the environmental factors such as light, temperature and precipitations have different impact on the polyphenols depending on the family of the specific compound. Although the comparison of the results obtained in the present study with other works is very difficult as each study consider distinct factors and use different protocols, other authors also found different influence of environmental factors on the synthesis and accumulation of the different families of phenolic compounds. Therefore, Blancquaert et al. [28] studied the evolution of flavonoids under altered temperature and light conditions of grapes during ripening in two different vintages. Although they studied the evolution of flavonoids in grape and not in grape stem, they also found different behavior between anthocyanins and flavonols. They concluded that the reduction of UV-B light significantly decreases the amount of flavonol biosynthesis, while this parameter has low influence in the case of anthocyanins, being both light and temperature the main factors that affect their synthesis and accumulation. Teixeira et al. [29] have also concluded that there exists different behavior between anthocyanins and proanthocyanidins with temperature and radiation, and identified flavan-3-ol compounds and proanthocyanidins as the most stable phenolics under diverse growing conditions.

The results showed that there exist significant differences in antioxidant activity, TPC and TF among grape stem from different varieties, and also between stems from the same grape variety but different vintages. The year that presented the highest number of days with extreme temperature conditions and accumulated precipitations during the time of grape development, veraison and ripeness (2016), was also the year in which the grape stems presented the lowest TPC, TF, antioxidant activity and concentration values of individual phenolic compounds. Regarding individual phenolic compounds, in general, Mazuelo presented higher concentration values of the different phenolic compounds than Garnacha and Tempranillo. It was also found that climatic conditions during the specified period of time had different impact on the synthesis of polyphenols depending on the family of the specific compound. Specifically, quercetin and its derivative, catechin, procyanidin B1 and gallic acid were the compounds most affected from one vintage to another, while the stilbenes presented a marked varietal component, since there has hardly been variation in their concentration from one year to another in any of the varieties studied in comparison with the rest of phenolic compounds analyzed.
In view of these results, it is important to consider that not only the variety can have a deep impact on the phenolic composition of a grape stem extract. Changes in the phenolic composition within the same variety among different vintages could significantly determine the future application of their corresponding extract. Therefore, the knowledge of the composition of grape stem extracts of different grape varieties and vintages is very important, as offers the possibility to select the most suitable application for each extract.

More
© Text is available under the terms and conditions of the Creative Commons Attribution (CC BY) license (http://creativecommons.org/licenses/by/4.0/)
Upload a video for this entry
Information
Subjects: Food Science & Technology
Contributor MDPI registered users' name will be linked to their SciProfiles pages. To register with us, please refer to https://encyclopedia.pub/register :
Nerea Jiménez-Moreno
View Times: 57
Revisions: 2 times (View History)
Update Time: 30 Aug 2021
Table of Contents
1000/1000
Hot Most Recent