Submitted Successfully!
Thank you for your contribution! You can also upload a video entry related to this topic through the link below:
https://encyclopedia.pub/user/video_add?id=13593
Check Note
2000/2000
Fucoidans and Bowel Health
Edit
This entry is adapted from 10.3390/md19080436

Fucoidans are cell wall polysaccharides found in various species of brown seaweeds. They are fucose-containing sulfated polysaccharides (FCSPs) and comprise 5–20% of the algal dry weight. Fucoidans possess multiple bioactivities, including antioxidant, anticoagulant, antithrombotic, anti-inflammatory, antiviral, anti-lipidemic, anti-metastatic, anti-diabetic and anti-cancer effects. Dietary fucoidans provide small but constant amounts of FCSPs to the intestinal tract, which can reorganize the composition of commensal microbiota altered by FCSPs, and consequently control inflammation symptoms in the intestine. Although the bioactivities of fucoidans have been well described, there is limited evidence to implicate their effect on gut microbiota and bowel health.

“Fucoidans” refer to fucose-containing polysaccharides with sulfate groups, extracted from brown seaweed species such as Fucus vesiculosus, Cladosiphon okamuranus, Laminaria japonica and Undaria pinnatifida [1]. It is well-known that fucoidans are present in the seaweed cell wall to sustain cell membrane stability and protect their structure against dehydration [2]. The structure of fucoidans has been correlated with their biological and immunological activities, such as antioxidant, anti-coagulant, anti-thrombotic, anti-inflammatory, anti-viral, anti-lipidemic, anti-metastatic, anti-diabetic and anti-cancer effects [3]. Although fucoidan extracts have been widely used in various health care products including food supplements [4] and cosmetics [5], their bioactivities were reported to be sensitive to alterations in their structural composition. Moreover, understanding their functional properties are complicated since it is dependent on fucoidan extraction methods and the different seaweed species [6]. Some studies have demonstrated that functional characteristics of fucoidan extracts are closely linked to their structural formula, compositions of sugars, sulfate content and sulfate group positioning [3][7]. Therefore, more knowledge about structural and chemical characteristics of fucoidan is essential to better understand functional properties of the fucoidan.

The intestinal epithelial barrier includes various types of cells, such as enterocytes, goblet cells, Paneth cells, and enteroendocrine cells, which are derived from multipotent intestinal stem cells (ISCs). A recent study showed that dietary components can also affect the differentiation of intestinal progenitor cells [8]. Lgr5+ ISCs can only recognize digested fructose and further differentiate into absorptive (i.e., enterocytes) or secretory progenitors (i.e., tuft cells, goblet cells, and Paneth cells), respectively. In addition, the intake of carbohydrates and proteins ameliorates intestinal epithelial injury by increasing membrane permeability [9]. Enterocytes line the surface of the epithelium in the small and large intestines, joined to each other by tight junctions. They are known to interact with nutrients including polysaccharides through antigen uptake and endocytosis [10]. Another study demonstrated that fucoidan extracted from Sargassum cinereum reduced the growth of the colon cancer cell line Caco-2, which has characteristics similar to enterocytes with a brush border epithelial layer [11]. In a study using human enterocyte-like HT-29-luc cells treated with extracts from Undaria pinnatifid, higher superoxide anion radical scavenging capacities and increased cell viability were shown compared to control groups [12]. Other studies on Caco-2 cell lines [13] showed that the eggshell membrane protein from chitosan/fucoidan nanoparticles reduced NO products and expression levels of TNF-α and IL-6, as well as having increased the paracellular permeability of fluorescein isothiocyanate-dextran in IECs, suggesting the importance of increasing bioavailability of fucoidan extracts to optimize their efficacy on immune response.

Fucoidan has also been reported to modulate immune cell counts and their functions. A study employed immunohistochemistry to identify fucoidan-positive cells and their cell types in the small intestine of rats fed 2% fucoidan. The authors detected fucoidan and ED1 (macrophage marker) double-positive cells, indicating that intestinal macrophages may be the main cell type to internalize fucoidan [14]. A recent study showed that fucoidan treatment also affects the production of intracellular reactive oxygen species and recruitment of macrophages and neutrophils in LPS-induced RAW 264.7 murine macrophage cell lines and zebrafish larvae [15]. In the case of dendritic cells (DCs), significantly lower expressions of MHCII and CD86 was observed in bone marrow-derived DCs of non-obese diabetic mice fed fucoidan compared to those in the control group [16].

Fucoidan as a bioactive compound with high molecular weight and sulfated polysaccharides [18]. Fucoidan extracts contain many sugars including fucose, galactose, xylose, mannose, and glucose [3]. While fucose is generally rich in most brown seaweed species, the proportions of the saccharides vary among different species [19] (Table 2). Microvilli and plasma membranes of enterocytes play a critical role in the digestion and absorption of fucoidan [14]. There might be three possible routes of fucoidan oligosaccharides through intestinal epithelium. Many digestive enzymes including amylase, protease and lipase are attached to the plasma membrane and help in breakdown of fucoidans to the constituent monosaccharides [20][21]. These compounds may infiltrate enterocytes by active transport via Na+-dependent glucose transporters [22]. In addition, they could be directly recognized and transported into the epithelium by endocytosis of IECs [23]. It is also assumed that they are absorbed as short-chain fatty acids (SCFAs) by the fermentation by-products from fucoidan [24]. The transported nutrients from fucoidan as energy sources could enhance intestinal barrier integrity and maintain intestinal homeostasis by interacting with various intestinal cells (Figure 2). 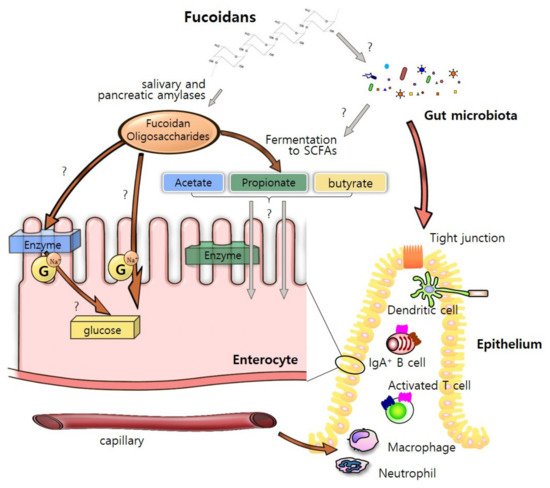 Figure 2. A pivotal role of fucoidans in the intestine. We suggest three possible routes of transporting fucoidans through intestinal epithelium. The fucoidan and its fermenters, short-chain fatty acids (SCFAs), can be digestive by several enzymes resided on intestinal epithelial cells, especially enterocytes. Although the mechanism of nutrient uptake is still unclear, fucoidan can lead to potential effect on host immunological homeostasis and microbiota composition. The ideas of the figure were based on [14][20][21][22][23][24].

Dietary fucoidans have been reported to have enhanced bioactivity and play pivotal roles in improving the gut health of animals, including humans [25], mice [26], livestock [27], and fish [28] (Table 1).

Table 1. Effects of dietary fucoidan as an immune regulator.

Inflammatory bowel diseases (IBD), including ulcerative colitis (UC) and Crohn’s disease (CD), are the most common intestinal disorders. In particular, IBD is a disease with an increasing worldwide incidence rate, and is characterized by multiple inflammatory reactions of unknown cause in the intestine. Two different fucoidan preforms, the fucoidan-polyphenol complex and depyrogenated fucoidan (DPF), have been shown to ameliorate DSS-induced acute colitis through the downregulation of pro-inflammatory cytokines, leading to decreased pathohistological scores [26]. Fucoidan extracts from Chnoospora minima also improve host inflammation symptoms by inhibiting the nitrous oxide (NO)-mediated expression of prostaglandin (PG) E2 in zebrafish [35]. Another intestinal disease that seriously threatens human health is colorectal cancer, which is the third most common cancer worldwide. Emerging evidence suggests that fucoidan may be a prospective anti-cancer agent. Although the efficacy of fucoidan uptake in intestinal epithelial cells varies based on its molecular size, fucoidan extracted from Cladosiphon okamuranus has been shown to enhance the survival rate in mice of a colorectal tumor-bearing model [36]. Fucoidan can control cell viability and the cellular cycle by downregulating the insulin-like growth factor (IRF)-I receptor via the Ras/Raf/ERK pathway [37]. Fucoidan extracted from Sargassum cinereum enhances reactive oxygen species (ROS) production and, consequently, inhibits cell proliferation by increasing the permeability of the mitochondrial membrane and the efficacy of apoptosis in Caco-2 cells [11].

As the intestine is closely associated with nutrient uptake, natural compounds have been studied as potential therapeutic agents to enhance intestinal immunity in humans. Although the effect of fucoidans in cell lines and animal models has been investigated, many questions remain unanswered, such as cellular phenotypes changed by fucoidan intake being a direct trigger to increase humoral immune responses. The structural composition of fucoidans varies with different seaweed species, harvest locations, and extraction methods. In addition, the bioactivity of fucoidans differs based on the degree of sulfation, monosaccharide composition, molecular weight, and the route of administration. Therefore, a better understanding of how fucoidan works in the intestinal area as a dietary additive or food supplement will help develop diet-based therapies for bowel diseases, such as IBDs or colorectal cancers (CRCs).

More
© Text is available under the terms and conditions of the Creative Commons Attribution (CC BY) license (http://creativecommons.org/licenses/by/4.0/)
Upload a video for this entry
Information
Subjects: Pharmacology & Pharmacy
Contributor MDPI registered users' name will be linked to their SciProfiles pages. To register with us, please refer to https://encyclopedia.pub/register :
Sun Young Lim
View Times: 59
Revisions: 2 times (View History)
Update Time: 27 Aug 2021
Table of Contents
1000/1000
Hot Most Recent