Submitted Successfully!
Thank you for your contribution! You can also upload a video entry related to this topic through the link below:
https://encyclopedia.pub/user/video_add?id=13504
Check Note
2000/2000
Angiopoietin-like Proteins
Edit
This entry is adapted from 10.3390/ijms22168439

Angiopoietin-like proteins (ANGPTLs) are a family of eight proteins with a diversity of applications, including pro- and anti-angiogenic properties.

So far, eight ANGPTLs have been discovered (they are numbered from 1 to 8) [1]. Characteristics of ANGPTLs are shown in Figure 1. Seven of ANGPTLs (ANGPTLs 1 to 7) exhibit an N-terminal coiled-coil domain and a C-terminal fibrinogen-like domain. Only one angiopoietin-like protein, ANGPTL8, which is homologue of the ANGPTL3 N-terminal domain, lacks a C-terminal fibrinogen-like domain. Their structures are remarkably similar to that of angiopoietins, as ANGs have two of the same domains as ANGPTLs 1 to 7, an N-terminal coiled-coil domain that mediates homo-oligomerization and a C-terminal fibrinogen-like domain that binds the endothelial-specific receptor tyrosine kinase (TEK) [2][3][4]. Angiopoietin-like proteins are proteins that, in humans, are encoded by genes localized in chromosome 1 (ANGPTLs 1, 3, and 7), chromosome 9 (ANGPTL2), chromosome 11 (ANGPTL5), and chromosome 19 (ANGPTLs 4, 6, 8) [3]. They have been also considered orphan ligands as they do not bind to the receptors that normally bind angiopoietins (i.e., tyrosine kinase with immunoglobulin-like and EGF-like domain 1 (Tie1), and the previously mentioned endothelial-specific receptor tyrosine kinase (TEK or Tie2)). This may be the main difference between ANG and ANGPTL, as it indicates that the mechanism of the ANGPTL action may be dissimilar from that of ANG. However, numerous studies show that ANGPTLs, similar to ANGs, are able to effectively intensify or regulate the metabolism of lipids and glucose, as well as angiogenesis (Figure 2) [1][2][3][4][5]. 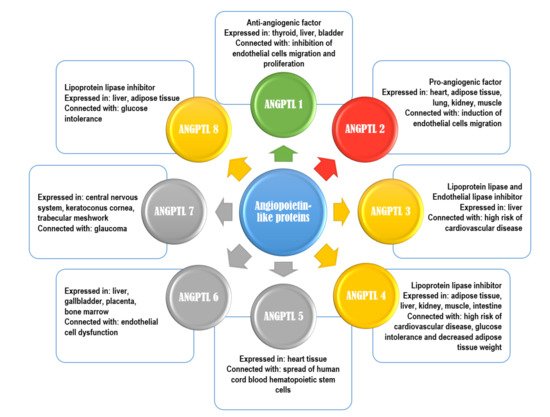 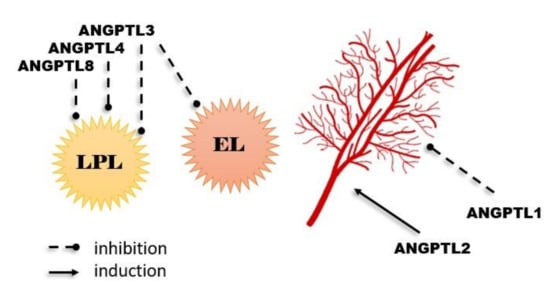 Figure 2. Most important physiological functions of angiopoietin-like proteins.
For example, ANGPTLs 3, 4, and 8 have the possibility of inhibiting the activity of lipoprotein lipase (LPL), which is predominantly responsible for triacylglycerol (TG) clearance in blood plasma. As high TG levels are an important risk factor for cardiovascular disease, researchers checked for reduced plasma TG levels in humans with loss-of-function alleles of ANGPTLs 3 or 4. The described “dependence” was noticed, and a reduced risk of cardiovascular disease was observed. Additionally, overexpression of ANGPTL4 (which is expressed and synthesized in adipose tissue, liver, kidneys, muscles, heart, brain, thyroid, and intestines) can intensify the intracellular lipolysis of TG inside adipocytes, which results in decreased adipose tissue weight [6][7][8][9][10]. In addition, ANGPTL3 (similar to ANGPTL8, practically entirely expressed in the liver and in a small part of the kidney and adipose tissue) is considered an inhibitor of endothelial lipase (EL). EL occurs on endothelial cells and has a part in HDL catabolism, primarily having a role in the hydrolysis of phospholipids transported by high-density lipoproteins (HDL). Moreover, ANGPTL3 loss-of-function mutations are connected to familial combined hypolipidemia, as its deficiency is correlated with reduced cholesterol and triglyceride levels in all lipoprotein fractions [11][12][13].

Interestingly, some authors revealed that the level of ANGPTL4 in plasma and its mRNA expression in adipose tissue can be decreased by hyperinsulinemia, which means that ANGPTL4 is involved not only in the angiogenesis process, but may also play a role in the course of diabetes mellitus or metabolic syndrome. It is believed that ANGPTL4 is also responsible for tumor development, vascular stability, glycemic homeostasis, lipid metabolism, cell differentiation, wound healing, inflammation development, and the regulation of redox potential [14]. It was also shown that reduced levels of ANGPTLs 4 and 8 might improve glucose tolerance [15][16]. Additionally, high serum levels of ANGPTL6 (expressed in the liver, gallbladder, placenta, and bone marrow) have been found in patients with metabolic syndrome and in women with subsequent pregnancy-induced hypertension. That is why its potential role in endothelial dysfunction was suggested. In addition, overexpression of this protein in animals was connected with weight loss and increased insulin sensitivity even in a high-fat diet. This protein influences wound healing by improving vascularization and proliferation of epidermal cells [17].
Angiogenesis is a process by which new blood vessels are formed. In physiological conditions, progression of angiogenesis is controlled by numerous factors, which may have pro- or anti-angiogenic properties. The most significant stimulators of these mechanisms are proteins of the VEGF family, fibroblast growth factor (FGF) family, angiopoietin/Tie system (ANG and ANGPTL), or metalloproteinases (MMPs). Formation of the blood vessels network is not always a physiological process. When the balance between the factors inhibiting and stimulating the angiogenesis is disturbed, pathological processes take place. Moreover, uncontrolled and deregulated recurrence of angiogenesis, as a response to extended or excessive inflammation in some pathological processes, is also found as malignant tumor development and cancer progression. Intensive tumor cell proliferation requires an enhanced supply of oxygen and nutrients. In cancer cells, this process is fostered by the induction of angiogenesis-stimulating factors. Its regulation depends on growth factors, cytokines, and cellular processes triggered in response to inflammatory stimuli or ischemia. As it is well known that inflammation promotes tumorigenesis and tumor progression, most ANGPTLs may have some functions in cancer progression [4][18][19].
Some ANPTLs may have pro- or anti-angiogenic properties. For example, ANGPTL2 was reported to be a proangiogenic factor. It is mainly expressed and synthesized in the heart, adipose tissue, lung, kidney, endothelial cells, and skeletal muscle tissues, where during hypoxia, its production is raised, which induces angiogenesis and migration of endothelial cells. ANGPTL2 expression in the adipose tissue is mainly connected with the circadian rhythm, with peak concentration during the period of activity. Adipose tissue ANGPTL2 regulates adipocyte differentiation and increases insulin sensitivity. The source of this protein in the adipose tissue are macrophages, and its expression has also been shown in the kidney subocytes of patients with diabetic nephropathy [20][21]. In contrast, ANGPTL1 (angioarrestin) was reported to be an anti-angiogenic protein. It was found that ANGPTL1 is normally synthesized and expressed in the thyroid, liver, muscle, connective tissue, bladder, and gallbladder [18]. Angiopoietin-like protein 1 can also inhibit the proliferation of endothelial cells, the migration of these cells, and their adherence to fibronectin, which is related to the inhibition of the formation of new blood vessels. The presence of this protein was found in many pathological tissues, and a reduction of its expression in the corresponding neoplasms was observed. The anti-angiogenic effect of ANGPTL1 was also confirmed in the tumor cell lines of lung and breast cancer. That is why the inhibition of cancer cell growth and tumor metastasis is a major effect of ANGPTL1 [3].
ANGPTL5 is synthesized in heart tissue and has a functional part in the spread of human cord blood hematopoietic stem cells [22]. While ANGPTL7 is synthesized and expressed mainly in the central nervous system, keratoconus cornea, and trabecular meshwork, it is believed to be involved in the pathophysiology of glaucoma. Its presence was first demonstrated in the cornea of the eye, where its function was associated with the absence of blood vessels in this area. A relationship was also demonstrated between the expression of ANGPTL7 and the co-production of extracellular matrix components, in particular type I collagen, which is important in maintaining the correct structure of the eye cornea and fluid perfusion in the trabecular meshwork tissue [23].
Proteins from the ANGPTL family, although they are produced in various tissues, i.e., in the liver, adipose tissue, brain, and many others, they are also present in the blood. Many of them were shown to correlate with biochemical parameters used in the diagnosis and monitoring of metabolic diseases, including type II diabetes. Testing the concentrations of proteins from the ANGPTL family in the blood may be of great diagnostic importance in the future, particularly in the treatment and prevention of diabetes mellitus (as these proteins are involved in the metabolism of lipids and glucose), and neoplastic lesions (mainly connected with angiogenesis and metastases), especially in the course of the neoplasm, where diet, as in the case of diabetes, plays an important role (i.e., for colorectal cancer) [4][5][14][18].

More
© Text is available under the terms and conditions of the Creative Commons Attribution (CC BY) license (http://creativecommons.org/licenses/by/4.0/)
Upload a video for this entry
Information
Subjects: Biochemistry & Molecular Biology
Contributor MDPI registered users' name will be linked to their SciProfiles pages. To register with us, please refer to https://encyclopedia.pub/register :
Monika Zajkowska
View Times: 62
Revisions: 2 times (View History)
Update Time: 25 Aug 2021
Table of Contents
1000/1000
Hot Most Recent