Submitted Successfully!
Thank you for your contribution! You can also upload a video entry related to this topic through the link below:
https://encyclopedia.pub/user/video_add?id=13330
Check Note
2000/2000
ROS in the Tumor Microenvironment
Edit
Upload a video
This entry is adapted from 10.3390/cancers11081191

Reactive oxygen species (ROS) are important signaling molecules in cancer. The level of ROS will determine physiological effects. While high levels of ROS can cause damage to tissues and cell death, low levels of ROS can have a proliferative effect. ROS are produced by tumor cells but also cellular components that make up the tumor microenvironment (TME).

Reactive oxygen species (ROS) include superoxide, hydrogen peroxide and hydroxyl radicals. While ROS can be damaging to lipids, proteins and DNA, in recent years their role as important intracellular and extracellular signaling molecules has become evident [1]. The mitochondria are the major source of ROS within a cell and play an essential role in regulation of proliferative, apoptotic and metabolic pathways [2][3][4]. It is established that the hallmarks of cancer include metabolic reprogramming as well as a tumor promoting microenvironment [5]. At the interface of both of these important biological events are ROS which are produced by cancer cells as well as cellular components in the microenvironment [6][7][8][9]. Understanding how the crosstalk between both extracellular and intracellular ROS not only within the tumor but also with regards to cells that make up the tumor microenvironment (TME) will be critical to our understanding of the process of tumorigenesis.

The majority of endogenous ROS produced in cells result from metabolic reactions occurring within the mitochondria or peroxisome. However, there is a subset of ROS that are also produced by nicotinamide adenine dinucleotide phosphate (NAPDH) oxidases (NOX) which are a family of transmembrane proteins that transport electrons across biological membranes and catalyze the conversion of oxygen into superoxide. Superoxide is then further reduced by superoxide dismutases (SODs) to produce H2O2. ROS can also be produced from cyclooxygenases, lipoxygenases and thymidine phosphorylase [10].
ROS play an important role in tumorigenesis and affect multiple biological processes such as cell proliferation, genomic instability, inflammation, resistance to apoptosis and metabolic reprogramming. Increased levels of ROS are observed in a number of cancer cell lines [11]. In a tumor cell, ROS are primarily generated by the mitochondria. Mitochondria produce superoxide (O2•) from one-electron reduction of oxygen through the mitochondrial electron transport chain (ETC) [12]. Within the mitochondria, ROS are generated at a number of different sites, the most important being complexes I, II and III [13][14]. Complex I and II generate O2• in the mitochondrial matrix while complex III produces O2• in both the matrix and intermembrane space [15][16]. O2• generated in the mitochondrial matrix is converted to H2O2 by superoxide dismutase protein 2 (SOD2) [17]. Complex III-generated intermembrane space O2• can travel to the outer mitochondrial membrane and into the cytosol where it is converted into H2O2 by superoxide dismutase protein 1 (SOD1) [18]. Given access to the cytosol, it is thought that complex III-generated ROS are responsible for affecting cellular signaling [19].
As mentioned previously, ROS levels are often elevated in cancer, however, high levels of ROS can have deleterious effects therefore, cells have evolved mechanisms in order to maintain a proper balance of ROS. These mechanisms include peroxide scavenging systems (peroxidases) which control H2O2 levels by reducing H2O2 to H2O [20]. Production of mitochondrial ROS are also regulated by the availability of O2, the rate of electron flux through the ETC, the concentration of given electron carriers and the mitochondrial membrane potential [12][21]. Finally, the localization of mitochondria within the cell has an important effect on influencing cell signaling pathways as clustering of mitochondria to discrete areas of a cell can preferentially affect adjacent signaling pathways [22][23]. Together these mechanisms allow for balance of the effects of ROS which can be exploited by tumor cells in order to drive cells preferentially towards a proliferative state.
Mitochondrial ROS can stimulate multiple signaling pathways. Perhaps the most well-known is the requirement of mitochondrial ROS for the stabilization of hypoxia-inducible transcription factors (HIFs) under hypoxia [24][25][26][27]. HIF stabilization leads to initiation of a broad transcriptional program including regulation of genes important for angiogenesis [28]. In order for angiogenesis to occur proliferation of endothelial cells is required [29]. To that end, HIF upregulates the expression of vascular endothelial growth factor (VEGF). VEGF is a soluble growth factor that binds to VEGF receptors and activates signaling pathways important to endothelial cell proliferation [30]. The mitogenic effects of VEGF are mediated most commonly through the activation of the extracellular-signal-regulated kinase/mitogen-activated protein kinase (ERK/MAPK) pathway which is a potent stimulator of cell proliferation [31]. Mitochondrial ROS are also critical in the activation of T-cells [32]. Reduced levels of complex III-generated mitochondrial ROS in mice leads to the inability for sustained T-cell activation despite stimulation with CD3 or CD28 [32]. Furthermore, a study demonstrated that mitochondria translocate to the immunological synapse in a T-cell line, and mitochondrial H2O2 is required for T-cell receptor (TCR) signal transduction through MAPK signaling [33]. Together, this data suggests that mitochondrial ROS augment TCR signal transduction after antigen stimulation required for T-cell stimulation and proliferation. Together, mitochondrial ROS play an important role in stimulating physiological cell proliferation and can be exploited by a tumor to promote survival and growth.
Tumors produce high levels of ROS [11]. Initially it was felt that high levels of ROS contributed to tumorigenesis by oxidative damage to DNA leading to genomic instability [34]. However, studies also demonstrated increased protein expression of cellular antioxidants in cancer cells [35]. Thus, cancer cells have the ability to maintain elevated mitogenic signaling without incurring substantial oxidative damage. Indeed, oncogenes and/or tumor suppressor loss in cancer cells lead to ROS production. For example, a study in which oncogenic H-RasG12V was overexpressed in 3T3 fibroblasts demonstrated increased production of ROS required for mitogenic signaling [36]. Furthermore, mouse embryonic fibroblasts transformed by the loss of p53 tumor suppressor as well as expression of oncogenes Akt, H-RasG12V or KrasG12D demonstrated that mitochondrial ROS are required for anchorage-independent growth in soft agar [6]. Mitochondrial DNA mutations in several genes important for the function of the ETC are present in a number of human cancers [37]. These mutations also lead to increased levels of mitochondrial ROS production [38][39][40]. Loss of mitochondrial transcription factor A (TFAM) in a mouse model of K-ras driven lung cancer demonstrated reduced tumor growth [6]. TFAM is necessary for mitochondrial DNA replication. When TFAM is absent oxidative phosphorylation is impaired and hence levels of mitochondrial ROS are decreased [6]. Furthermore, this study demonstrated that mitochondrial ROS are required for anchorage independent growth in numerous cancer cell types [6] Taken together, the production of ROS by tumor cells plays an important role in driving tumorigenesis however, ROS production by other non-tumor infiltrating cells as well as the overall oxidative state of the local TME has profound effects on tumor biology (Figure 1).

The TME includes not only tumor cells but tumor lymphatics, tumor vessels, extracellular matrix, non-cancer stromal cells as well as chemical modulators (i.e., chemokines, cytokines, growth factors) and microbial populations. The extracellular matrix (ECM) and stroma include interstitial matrix as well as the basement membrane, and can act as a storage site for many growth factors and chemokines that can stimulate tumorigenesis. Non-cancer stromal cells include endothelial cells, pericytes, immune cells, activated adipocytes, mesenchymal stem cells (MSCs), normal fibroblasts and CAFs. Normal fibroblasts are responsible for ECM turnover and tissue homeostasis. They are fundamental in the processes of wound healing and senescence. Unlike normal fibroblasts, CAFs can be found at the margins of tumors or infiltrating into a tumor. Activated fibroblasts that are found in association with cancer cells are known as CAFs and play key roles in cancer initiation, progression and metastasis [41][42]. CAFs are further subdivided into fibroblasts and myofibroblasts. Alpha-smooth muscle actin (α-SMA)-positive myofibroblasts are noted to be the major population of CAFs present in tumors [43].
The major role of CAFs is to augment tumorigenesis [44]. Infiltrating CAFs are more proliferative than normal fibroblasts and activate specific signaling pathways important for the promotion of tumor growth [45][46][47]. CAFs residing at the margins of tumors but not within are characterized by their ability to promote cancer progression in vivo [48]. These CAFs are known to secrete factors such as CXCL12 which can go on to activate pro-tumorigenic pathways such as AKT in adjacent epithelial cells [49]. CAFs are present in almost all solid tumors. In certain tumors such as breast, pancreatic and prostate, CAFs can account for up to 80% of the tumor mass as they are responsible for the excessive growth of fibrous or connective tissue (desmoplasia) [50]. A high percentage of CAFs within cancer tissues is associated with poorer prognosis, increased infiltration of tumor-associated macrophages and epithelial to mesenchymal transition (EMT) [50].
Desmoplasia is a marker of tumor progression and generates mechanical forces which can limit the lymphatic and blood supply to a tumor through compression of vessels in turn creating a hypoxic environment [51]. Furthermore, these mechanical forces can cause conversion of fibroblasts to myofibroblasts [51]. As previously mentioned, hypoxia stimulates the production of mitochondrial ROS and cancer cells produce higher levels of ROS than normal tissues which can influence CAF function [9][52]. CAFs can derive from epithelial, endothelial, hematopoietic stem cells, pericytes or adipocytes as well as resident fibroblasts present in stromal tissue [53][54][55][56][57][58][59]. A large proportion of CAFs identified in aggressive adenocarcinomas express smooth-muscle α-actin (α-SMA) and, therefore, are called myofibroblasts [60]. Myofibroblasts’ major function is in wound healing and repair and in tumors these cells can act as drivers for deranged chronic wound healing. Several studies have demonstrated that ROS can be a driver for myofibroblast differentiation. Several studies reported the importance of ROS in the fibroblast to myofibroblast transition (Figure 2A). Transforming growth factor beta 1 (TGF-β1) as well stromal cell-derived factor 1 (SDF-1) and others play a major role in driving the transition from fibroblast to myofibroblast. It is well known that mitochondrial-ROS are required for TGF-β1 activation. Indeed, when fibroblasts were exposed to a pharmacologic inhibitor of mitochondrial-ROS, TGF-β1 expression levels were reduced [61]. Fibroblast to myofibroblast conversion can also be induced with SDF-1 in an ROS-dependent manner [58][60]. Furthermore, fibroblasts exposed to chronic oxidative stress can also differentiate into myofibroblasts [9][60]. Fibroblasts isolated from mouse models of oxidative stress in which key antioxidant transcription factors were depleted demonstrated a conversion to myofibroblasts which could be reversed with the long-term treatment with exogenous antioxidants [60][62]. Additionally, decreased ROS levels due to upregulation of antioxidant enzymes such as glutathione peroxidase 3 and thioredoxin reductase I within fibroblasts from prostate cancer inhibits differentiation into myofibroblasts [63]. Taken together these observations demonstrate that ROS can promote myofibroblast differentiation in human tumors. 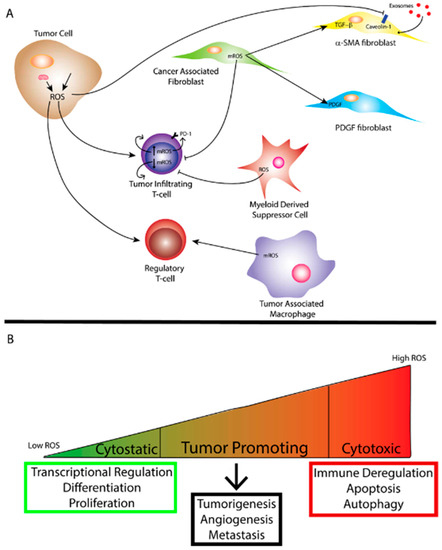 More
© Text is available under the terms and conditions of the Creative Commons Attribution (CC BY) license (http://creativecommons.org/licenses/by/4.0/)
Upload a video for this entry
Information
Subjects: Oncology
Contributor MDPI registered users' name will be linked to their SciProfiles pages. To register with us, please refer to https://encyclopedia.pub/register :
Deepak Nagrath
View Times: 126
Revisions: 2 times (View History)
Update Time: 19 Aug 2021
Table of Contents
1000/1000
Hot Most Recent